Precisely four years ago, then-Chairman of the Executive Board, Matthias Müller, took to the stage on Porsche’s stand at the Geneva Motor Show to reveal the 991.1 GT3. Heralding a vast change from old in favour of greater technological integration, trailblazing this avant-garde approach to track driving was compulsory PDK transmission. In the wake of Müller’s presentation, journalists and enthusiasts alike were left stunned. The manual GT3 we’d all loved dearly since 1999 was dead.

We were told afterwards, and in no uncertain terms, “There will never be anything other than a PDK 991 GT3,” Weissach’s engineering team deemed so small and focused that the diversions of engineering a manual weren’t allowed. Alas, there was no chance of seeing a manual Porsche 911 GT3 then or in the future. 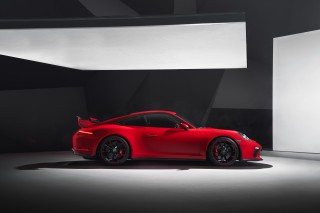 And yet, 1,460 days later, new Chairman of the Executive Board, Oliver Blume, took to the same Geneva stage as his predecessor and presented the 991.2 GT3, this time with only a handful of new yet universally favourable changes over old. Not that indeed you’d notice. For while, externally, you may only observe a quiet evolution, it is a thumping revolution that has taken place beneath the GT3’s lightweight body.

From the outside, the car still shares the same 1,852mm-wide Carrera 4 bodyshell as before, with an identical footprint in terms of tyre specs (245/30/ ZR20 Michelin Pilot Sport Cup 2s on the front and 305/30/ZR20 on the rear) connecting it to the road. A new underbody diffuser to better manage airflow won’t be visible from the kerbside, though there are obvious adjustments to a nose and front spoiler Porsche says is designed to optimise airflow.

The science of airflow is also responsible for a curt revision to the GT3’s engine intake, the Gen2 car now featuring neat twin ducts past its rear screen. These channel air down to the flat six either side of two cooling fans, now centrally mounted under the decklid (the Gen1’s induction relied on a single external duct channelled – centrally – between those cooling fans).

The GT3’s carbon rear wing is virtually the same as before (for the first time on any second-generation GT3), though a small detail on the outer face of its uprights hints at where more distinguished changes can be found on Weissach’s latest sports car. That ‘4.0’ inscription is the giveaway that a flat six with increased capacity resides aft of the GT3’s rear axle, though news it is not the same 4.0-litre engine as found in the 991 R and GT3 RS may come as a surprise for some.

“The engine is a fundamental revision of the prior 4.0-litre – it has a new valve gear and new crankshaft and lower internal oil pressure, together with new piston rings, which all together offer less resistance to the rotating masses,” a Porsche spokesman tells Total 911. This is because the engine of the 991.2 GT3 is, to quote Porsche again, “virtually unchanged” from the 991.2 GT3 Cup, the thoroughbred racer to be used for Supercup races this year, as well as the new rear-mid-engined RSR. “Lots of learning and data from the Motorsport programme has fed into its development,” our spokesman confirms.

That means – and here’s the really good bit – the new 991 GT3 is able to retain its redline of a heady 9,000rpm, maintaining that headline-grabbing characteristic of the banshee 9A1 flat six fitted to the first-generation 991 GT3. After Weissach reduced maximum rev limits for the 991 GT3 RS and 991 R to 8,600rpm, this marks an impressive return for the new GT3 as the equal highest-revving, road-going Porsche 911 of all time.

There’s more good news quite literally bolted on to that revised 4.0-litre engine, too, as the latest GT3 will once again feature a manual transmission if you so wish. Weissach’s seven-speed PDK is the default gearbox choice, though a sharp six-speed manual honed from Preuninger’s 991 R is also available, bringing with it an estimated 30-kilogram reduction in overall mass. Even better, this manual gearbox option can be swapped in for PDK at no additional cost to the owner.

A manual gearbox may be a welcome addition to the 991.2 GT3’s spec configurator (online now, should you be tempted to start shopping), though a single-mass flywheel – as previously available on the R’s options list – is notable by its absence. Porsche confirms to Total 911 a lightweight flywheel will indeed not be offered: “The new crankshaft design does not support it for one thing, but also the engine revs up so quickly now thanks to the reduced internal friction that it is not necessary either.” In terms of chassis, the new GT3 rides 5mm closer to Earth than the 991.1 using similar underpinnings that have been refined. Standard equipment once again includes rear axle steering, aiding stability through corners; Sport PASM with dynamic engine mounts, and a limited-slip differential, further bringing racecar pedigree to a road 911.

Inside, the new GT3 enjoys subtle upgrades in line with the rest of the 991.2 range. Latest PCM with Apple CarPlay is present, while a GT Sport wheel with smaller 360mm diameter is standard equipment, as is Porsche’s Track Precision App, which allows you to display, record and analyse in-depth driving data on your smartphone.

The result of all these revisions to the GT3’s specification is impressive performance statistics. A PDK-equipped example will sprint to 62mph from a standing start in a fast 3.4 seconds, one tenth of a second quicker than previously, while the lighter car with a manual gearbox will top out at a mighty 198.8mph (the first-generation GT3’s maximum speed is 196mph).

Porsche is quick to appraise a power-to-weight ratio of 2.86kg/hp for the 991.2 – the best of any GT3, ever – though that doesn’t quite tell the whole story (see our table). This latest 991 GT3 is actually the first not to boast a better power-to-weight ratio than the Rennsport not limited in production preceding it, though admittedly this only rings true for the PDK-equipped car.

Interestingly, Porsche hasn’t officially released a Nürburgring lap time for its new GT3, though we at Total 911 quite like this omission – after all, it is the driver that achieves a lap time, not the car on its own. And perhaps that is the point here: with manual and PDK options a free choice for buyers, it is exclusively up to the owner which legacy they will choose to continue in the new GT3, be it the 991 R’s purity of driving on the best twisty roads you can muster, or the precision in performance offered by Porsche’s trackday-oriented Rennsport.

Priced from £111,802 including VAT for UK and Ireland (C16) models, first deliveries of the new 991.2 GT3 are expected by early summer. For many customers who’ve had deposits of £10,000 sitting with Porsche Centres for months now, that due day cannot come soon enough.

Power to weight: the Weissach story

Porsche’s GT3 line-up has always boasted impressive power-to-weight figures for a road-legal sports car. Here’s how each of the iterations stack up. 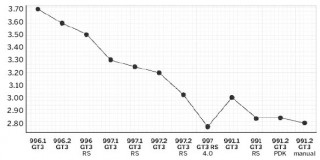 Same dimensions as 991.1 Maximum width remains 1,852mm as per Carrera 4; tyre specs are identical too.

4.0-litre NA engine Biggest capacity engine ever fitted to a GT3 means the 991.2 reaches the magical 500hp mark without the need for turbochargers.

Upgraded design ‘3D effect’ rear lights and more discreet DRLs mimic the styling of the rest of the Gen2 range.