We’ve said it before and we’ll say it again: is there really a more perfect all-rounder than one of the fantastic contemporary ‘RS’-badged Audis we’re lucky enough to find in our local showrooms in this day and age? Earning a reputation of being the cars that promise to do it all is all very well, but it does leave room for some compromise along the way. Take the storming new RS5, for instance. Showcasing off the firm’s all-new boosted V6 platform in a spectacular way, but will some argue that it doesn’t quite look special enough? And is it really as driver-focused as it could be? If any of these thoughts have ever crossed your mind, we think we might’ve found you the answer…

Bavaria-based motorsport and tuning group ABT Sportsline has a rich history of success alongside the VAG-based car group in its 100-plus year history. Evolving from a one-man-band race team in the hands of Johann Abt throughout the 20th century, the firm stepped things up a notch in 1991 to form the behemoth of a company we’ve come to associate with the fabled three letters today.

Running successful factory-backed DTM touring cars for several years alongside Audi Sport and clinching the 2017 Formula E constructor’s championship, there’s no denying its motorsport prowess around the world. But that’s only half of the story, with the firm also developing range-topping tuning parts for several German road cars, too; some of which have even been recognised by manufacturers and offered as factory upgrades in showrooms. ABT really is that good at what it does.

Showcasing its aftermarket products with several formidable demo cars over the years, like the 480bhp, B7-based ‘AS4-R’ from a few years back and the ‘R8 GT R’ race-car-for-the-road, we’re pleased to report ABT’s latest creation certainly lives up to its impressive predecessors. Unveiled at the 2018 Geneva Motor Show, this Sonoma Green ‘RS5-R’ that’s based on the latest RS5 is the first of 50 cars that ABT intend on producing to this impressively comprehensive specification. Taking the Rennsport formula and cranking it up another level on the dial when it comes to almost every aspect of the coupé, the RS5-R illustrates just what’s possible when you carefully tweak one of these impressive cars whilst ensuring it retains all of the day-to-day usability they’re so famous for. And boy, the results really are something special!

Let’s start with that twin-turbo V6 lump up front. Harking back to one of the very first RSs – the B5 RS4 – the motor has already shown its potential in the hands of several tuning companies who’ve begun applying basic hardware tweaks with impressive results whilst the race continues to crack into the new ECU infrastructure. ABT’s applied the ‘Power S’ package to the RS5-R – involving a bespoke exhaust system complete with carbon fibre trims, an additional water radiator kit and new circulating pump. Combined with the firm’s piggy-back ECU upgrade, and power jumps up from 444bhp and 443lb ft of torque to 530bhp and 509lb ft of torque: enough to drop the 0-62mph time to a supercar-worrying 3.6 seconds.

Driving the car hard, it really feels like the final extra push from ABT has awoken a whole new animal from the RS5’s drivetrain; with all concerns of numbness and indirect feel replaced for a mesmerising ride that’s backed with a much more vocal V6 growl. Next up, let’s talk suspension.

Considering the base model has only been out for less than a year, it makes the fact that ABT has been able to develop a fully adjustable coilover system especially for the RS5 all the more impressive. Complete with old-school threaded bolts on the top mounts for easy adjustability, when combined with ABT’s ‘sports stabiliser’ anti-roll bars, these new shocks and springs really take the road-focus softness out of cornering capabilities while somehow managing to retain a top-quality ride when you’re not driving on the ragged edge – a setup which we imagine is the stuff of many standard RS5 owners’ dreams.

But like with any ABT build, the performance aspect is only ever half of the story. The other side of the RS5-R’s modifications revolve around helping to further differentiate it from the lowlier A5s in the range, with more than a fair share of carbon fibre being utilised in the process.

Up front, that angular splitter that’s added below the standard bumper sets the aggressive tone that’s seen throughout the rest of the body now. It’s finished up with a duo of canards on each corner, as well as a branded grille surround that’s created using the same lightweight material. There are also side skirts, those tasty wing vents, and a comprehensive rear diffuser out back that complements those new quad exhaust tips. When combined with black badging throughout, the results on this bright green car here are nothing short of stunning; offering up that ‘GT3’ vibe that it was arguably lacking from the factory.

There’s also those ABT alloys (we told you this firm really does do it all!) – ‘GR’ affairs that weigh in at a whole two inches larger in diameter than the standard components. Helping to reduce unsprung mass, they’re not just there for show, even if they do look epic housing the optional carbon ceramic brake package here.

The RS5-R’s interior remains fairly close to Audi’s original vision, aside from a raft of branding that will ensure you’ll never forget this is no ordinary RS5 you’re lucky enough to be sitting in. Once again, the extra touches come in the form of plenty of carbon fibre that replaces the majority of the originally plastic trim, further asserting the classy performance intentions this model sets out to achieve.

A quick chat with the geniuses behind ABT reveals that each of the various ‘packages’ from the RS5-R (performance, styling and chassis) are available to purchase separately for those who’ve already snapped up an RS5. And as for the complete cars, only 50 will ever be produced, of which the majority have already been snapped up. Anyone can go and spec up a stock version of this car at their local Audi dealership, but the RS5-R is designed for those who believe they deserve something a little more special and exclusive when it comes to their car choice. And we know which one we’d rather own…

ABT RS5-R ABT SPORTSLINE’S HEATED-UP ‘RS5-R’

SUSPENSION ABT coilover suspension with ABT ‘sports stabiliser’ anti-roll bars

Above: Interior remains fairly standard, with some extra carbon fibre sprinkled in Below Right: Custom stitched seats are a nice touch 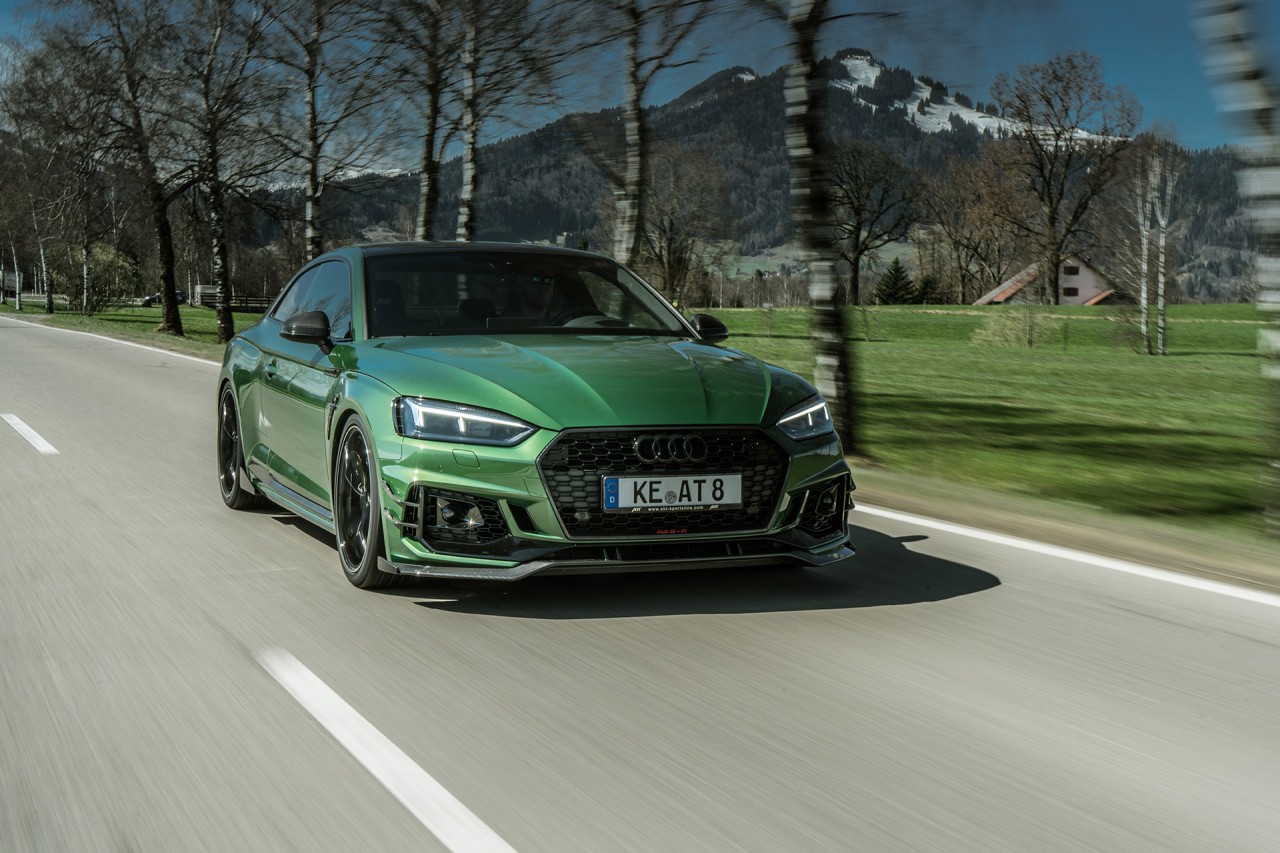 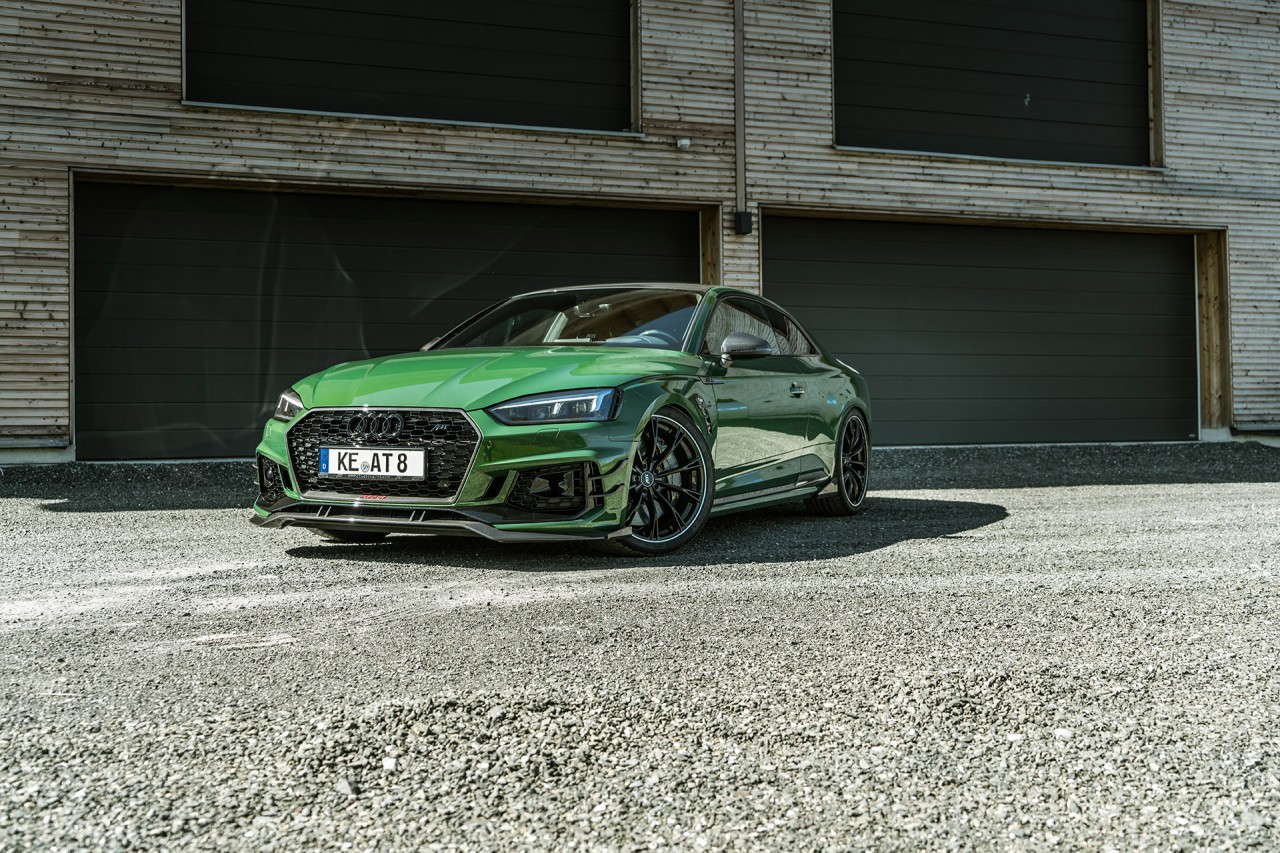 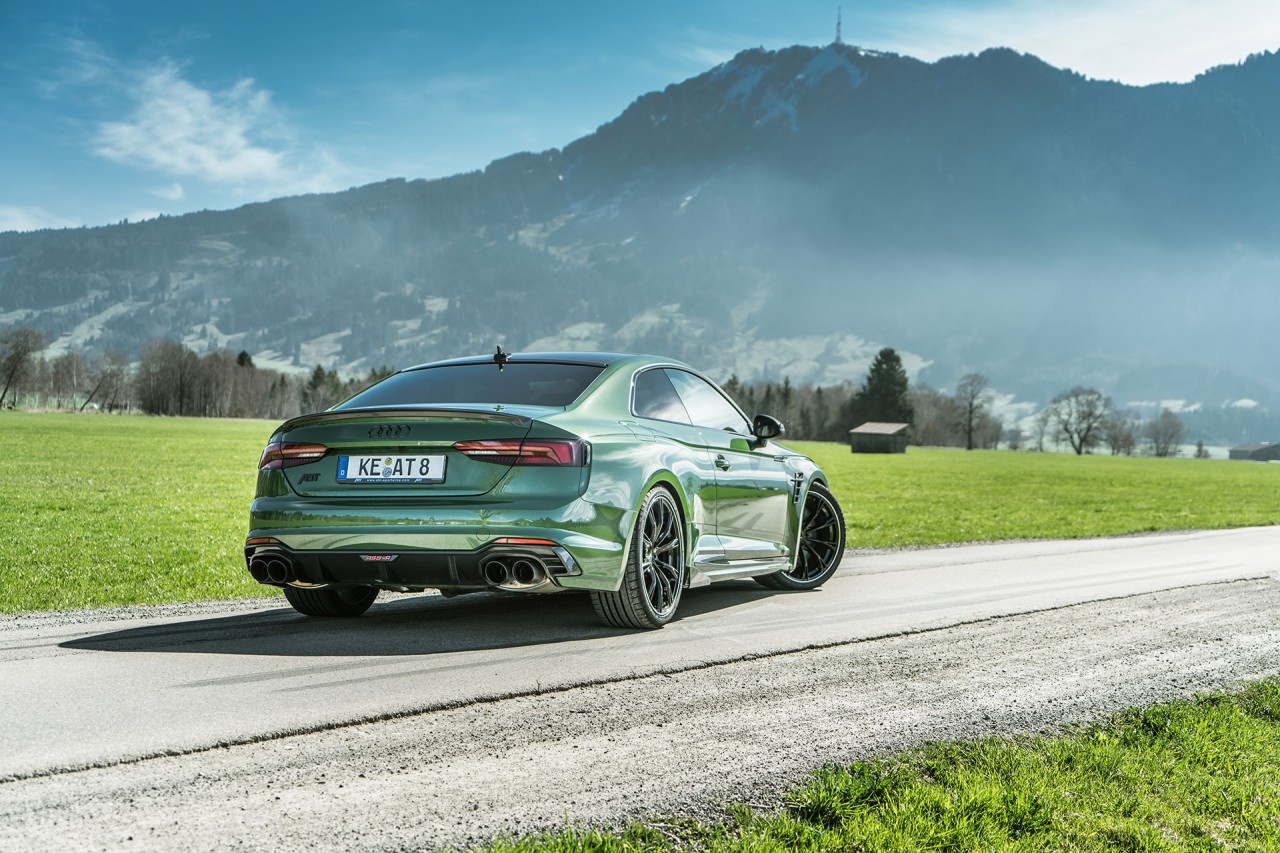 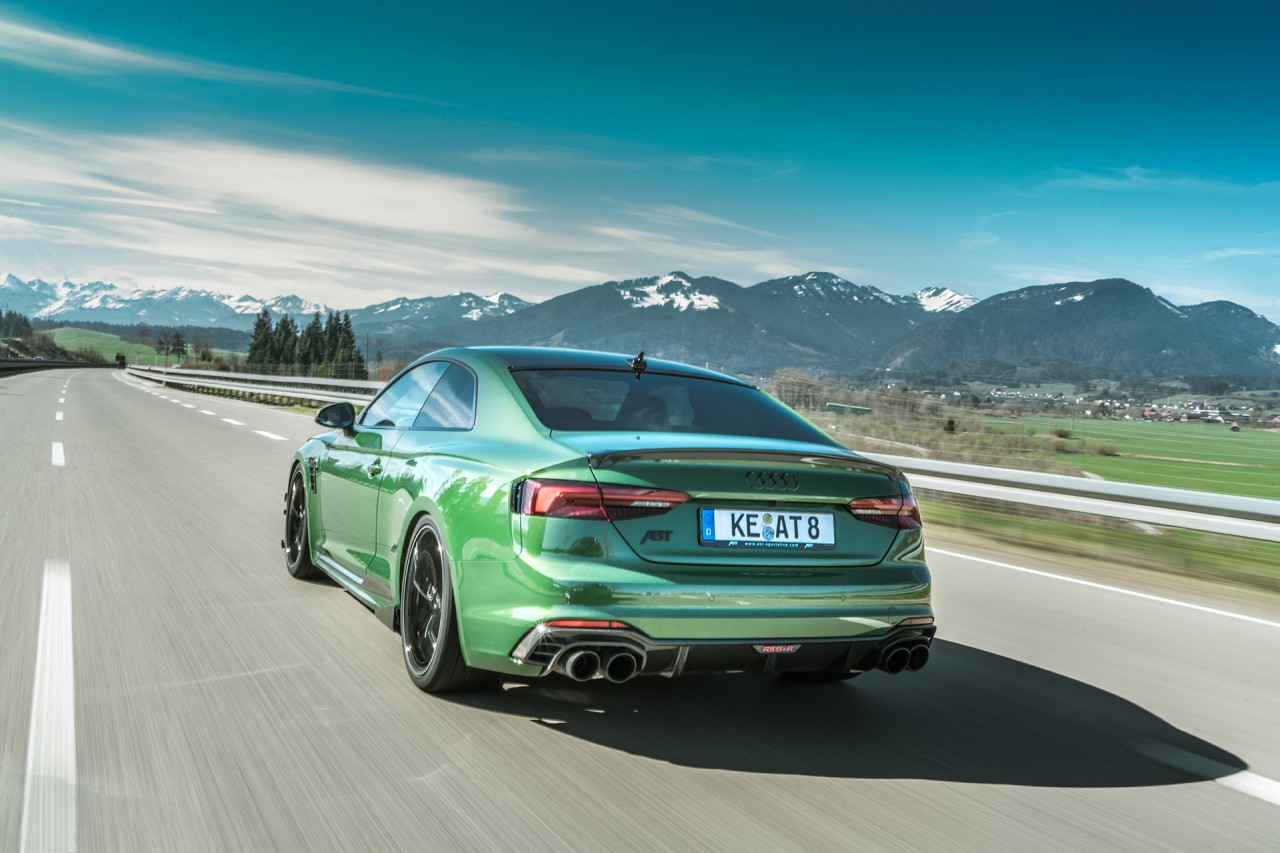 Below: ABT’s very own 21in ‘Sport GT’ wheels offer up far more aggression than the standard units. Right: Doesn’t that Sonoma Green bodywork look stunning with lashings of carbon fibre?

“Taking the Rennsport formula and cranking it up another level…”