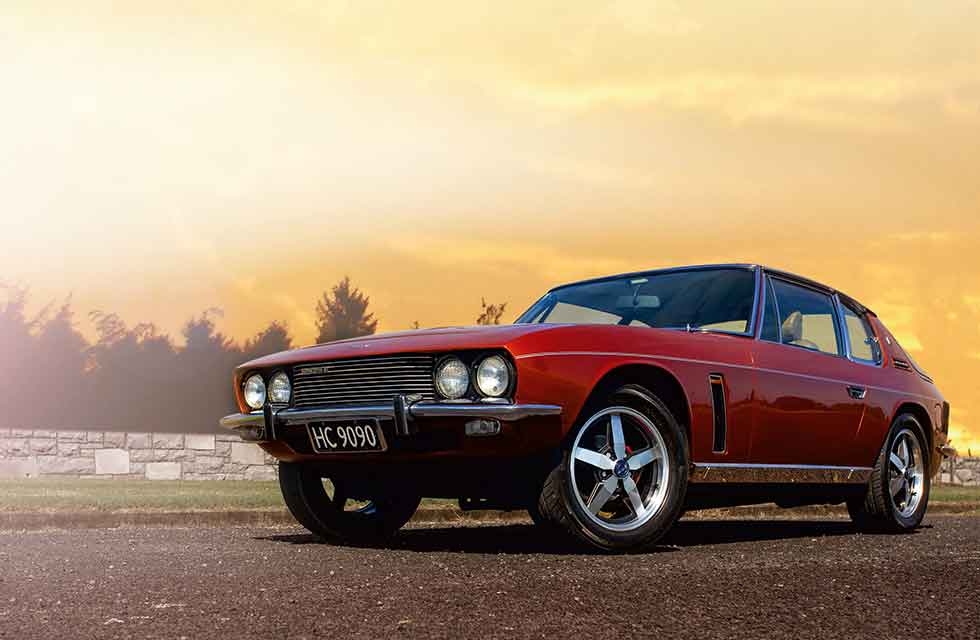 Jensen Interceptor elegance and power from either side of the Atlantic. The Jensen Interceptor — a ‘no replacement for displacement’ American V8 engine nestled in an Italian-designed, genuinely luxurious, British-built touring car. Words: Ashley Webb, Stuart Bilbrough. Photos: Adam Croy.

Just over a year ago, I sat with Stuart Bilbrough watching our photographer, Adam Croy, take fantastic photos of Stuart’s 1958 Studebaker Champion. Those photos would grace the front cover and pages of the April 2018 issue of this magazine, No. 328. Readers may remember the crux of the Studebaker’s story being the car’s incredible originality and very low mileage.

As we watched Adam applying his masterful talent behind the camera lens, Stuart told me that he was thinking of selling the Stude’, as his passion for the car was in the low miles and well-documented New Zealand history rather than a long-time desire to own a Studebaker. (This aside, Stuart also loves the Golden Hawk and Avanti.) We estimated a price range that it could possibly fetch and from which parts of the world the most interest would come.

I then asked Stuart what he’d replace the Stude’ with, and we started listing iconic classics that might sit around that price bracket. For Stuart, the iconic classic that he had been keen to own at least once in his life, and within stretching distance of this price range, was the Jensen Interceptor.

An amount of personal opinion is involved in classing something as ‘iconic’. It would be hard not to argue that McLaren, Lamborghini, and Aston Martin had models that really are iconic, even when examples such as the DB6 sold in the late ’60s and ’70s for a similar price to the Interceptor.

Many cars are iconic because they are associated with the likes of television and movies — again, the Aston Martin sits well here through its association with James Bond. (What were they thinking when, for a period, they used cars like the BMW Z3?) Even affordable classics in today’s crazily priced classic car market could be deemed iconic by association with the TV screen — for example, Simon Templar’s Volvo P1800 in The Saint.

Less well known to the general public will be what the rich and famous drive in their spare time — for example, after filming a new blockbuster or performing a gig at Wembley Stadium. Past and present Interceptor owners include Frank Sinatra, Mick Fleetwood, Cher, Bing Crosby, Princess Anne, and Cliff Richard.

In the ’90s British Classic Car series, The Car’s the Star, Cliff Richard begins his interview about the time he owned a Jensen Interceptor by saying, “I saw this fantastic shape with this impossible back window and I wanted one, you know. So once I decided to buy it and get it, it was just a wonderful feeling to have it, because there was a kind of elitism too. I think what we all felt at that time was that it looked like a space-age car. I got the feeling it was an eye-catcher, and I drove it with flamboyance.” Sir Cliff bought his Jensen Interceptor in January 1969, and, in keeping with that flamboyance, it was yellow!

Sadly, Jensen is a car manufacturer that, like Studebaker, ended up on the financial scrapheap after a relatively illustrious history in the automotive industry.

Jensen Motors Limited was a British manufacturer of sports cars and commercial vehicles formed in 1934 by brothers Alan and Richard Jensen. The production plant was set up in West Bromwich not far from Birmingham in England. Jensen also built car bodies for other manufacturers, with examples including the Austin-Healey 100 and 3000; the Sunbeam Tiger; and, interestingly, the already mentioned Volvo P1800. Jensen’s own car designs used the engines and mechanical parts of major manufacturers such as Ford, Austin, and Chrysler.

As mentioned, the DB6 was a similar price to the Interceptor when on the showroom floor back in the late ’60s. Today, a pristine example is worth about a cool half a million dollars. Yikes!!

The company traded continuously until 1976, although there were short periods when trading under different owners resumed after the ’70s.

Although the Jensen Interceptor was probably the greatest grand tourer that Jensen Motors produced, other models included the popular Jensen-Healey — the most successful, with more than 10,000 units manufactured — the elegant 541; and the CV8, which for some was an acquired taste in design. The CV8 may well have led to the decision by the Jensen Motors board of directors to head for Italy to look for a more appealing design — and the retirement of the Jensen brothers.

In his book Jensen Interceptor: The Complete Story, John Tipler writes the following, which gives a great insight into the genesis of the Jensen Interceptor: “Kevin Beattie was employed as deputy chief engineer at Jensen Motors on 1st January 1960, and his first major project was to design the chassis for the new CV8 model. However, he was less than happy with Eric Neale’s (Jensen’s in-house designer since 1946) design of the CV8’s fibreglass bodyshell, and went off to Italy to see what the fashionable Italian styling houses could offer. He returned from Turin and Milan with drawings based on the CV8 chassis from Touring of Milan, Alfredo Vignale, and Ghia, and was able to persuade the Norcros half of the Jensen board that the Italian body was the one to go with, rather than the in-house job.

“The design most favoured was originally penned by Touring’s studio, but Beattie had it altered by Vignale’s draughtsman. When the board voted to go with the new Interceptor design, Vignale got the job of producing the prototype because of Touring’s lack of capacity and ailing financial situation. Although the specialist carrozzerie (coachbuilder) of the Italian motor industry produced fabulous cars in aluminium, they had no tradition in working with fibreglass, so the Interceptor would be steel.”

The first Interceptor rolled off the production line in 1966 with a 383-cubic-inch (6276cc), Chrysler V8 engine generating 325bhp (242kW). The MkI body was initially manufactured by Vignale in Italy, but, due to poor manufacture quality, this was moved to West Bromwich.

Between 1966 and 1976, 6727 cars were produced. Richard Calver’s outstanding book A History of Jensen: Original Interceptor and FF; Including SP, Convertible and Coupé provides detailed numbers of Interceptors produced:

Between 6 and 25 October 1973, war broke out between Israel and a coalition of Arab states led by Egypt and Syria. What became known as the ‘Yom Kippur War’ also bought on an oil embargo of those nations perceived as supporting Israel by the members of the Organization of Petroleum Exporting Countries (OPEC). Oil prices shot through the roof and a large — by now 7210cc — Chrysler V8 engine suddenly became a less desirable option for the elite that Sir Cliff referred to in the ’90s.

By 1975, Jensen Motors Limited was struggling to keep its head above financial water, and, with a worldwide recession and problems with its Jensen-Healey sports car, the company was placed in receivership. The receivers allowed production to continue until stocks of parts were exhausted, and production of the Interceptor ended in 1976.

The hunt for an Interceptor

Anyone who is a classic car lover will have one or two dream cars that they would love to own at least once in their life. For some reason, to torment ourselves and our fanciful belief of “when I win Lotto” one of these classics will be totally unattainable. For Stuart, that car would be an Aston Martin DB5 or DB6. He says how fantastic it would be to say to his wife, “Sweetheart, shall we take the Aston tonight?” As noted earlier, the DB6 was a similar price to the Interceptor when on the showroom floor back in the late ’60s. Today, a pristine example is worth about half a million dollars. Yikes!

Assuming most of us are realists with a modest budget — maybe the mortgage has been paid off; the kids have left home; the partner, wife, or husband at least attempts to understand that the classic car is an investment; and it is, in fact, the eve of a blue moon — we are able to start the hunt for that more attainable dream classic.

Stuart’s hunt for a Jensen Interceptor started in mid 2018 not long after that talk we had. It ended in Tauranga after Stuart met Mike Keaney just before Christmas and saw his fantastic New Zealand–new 1974 MkIII Jensen Interceptor (HC9090). In immaculate condition and awesome to drive, she now sits in Stuart’s garage next to a very home-grown Kiwi classic: a fully restored 1970 Trekka that graced these pages in the June 2015.

Stuart knows little of the history of HC9090.

At the recent Brit and Euro Classic Car Show at Lloyd Elsmore Park in Auckland, he was very fortunate to meet a very spritely octogenarian, Brian Hall, who was one of the founders of the Thornton Hall New Zealand fashion house and one of the owners of the Hullabaloo brand of the ’80s and ’90s. Brian knew the car from the showroom where he’d purchased a similar Jensen Interceptor brand new, way back in 1974. What is fantastic is that, 45 years later, Brian still owns his Interceptor.

Oh yes, and who bought the 1958 ultra-original, ultra-low mileage Studebaker Champion? The chap who bought the Studebaker lives near to Stuart and is driving it, adding to the 128 original miles. Stuart saw the car being driven through Papakura a few months ago, and says, “It was a real buzz to see New Zealand’s most original classic finally, 60 years since coming off the South Bend, Indiana production line, being used as she was meant to be.”

Top: Sumptuous leather and a sports steering wheel compliment the interior perfectly Centre: The Jensen looks great from any angle Bottom: The name says it all. The very first Jensen Interceptor MkI finished at the factory in West Bromwich in 1966

In New Zealand, there is a Jensen register managed by Philip Barker of Jensen Motors New Zealand — without doubt, the New Zealand expert in everything Jensen. This register lists more than 60 MkIII Interceptors in this country. Despite so many examples, very few are seen on New Zealand’s roads — presumably they are sitting in varying to-be-loved-again states throughout the country.

There is no specific Jensen owners club, but Lisa Jensen of Jensen Classics Vehicle Storage in Auckland — no relation to the Jensen dynasty despite the ultra-fitting surname — keeps the loose fraternity of Jensen owners abreast of what’s happening via a periodic events newsletter. Jensen and Healey owners meet monthly on the first Tuesday at 7pm at the Remuera Club, 27–33 Ohinerau Street, Auckland.

September 1966 Alan and Richard Jensen, the founders of the Jensen Motors, retire

August 1969 The thousandth Interceptor is delivered

October 1969 Launch of the MkII Interceptor and MkII FF announced

October 1971 Launch of the MkIII Interceptor and SP announced

March 1974 The Interceptor convertible is introduced

December 1974 Four hundred staff are laid off; the remaining workers are put on shortened hours

October 1975 The Interceptor Coupé is introduced

May 1976 Jensen Motors Limited closes down; Jensen Parts and Service is formed

July 2001 Jensen Motors goes into receivership for the final time