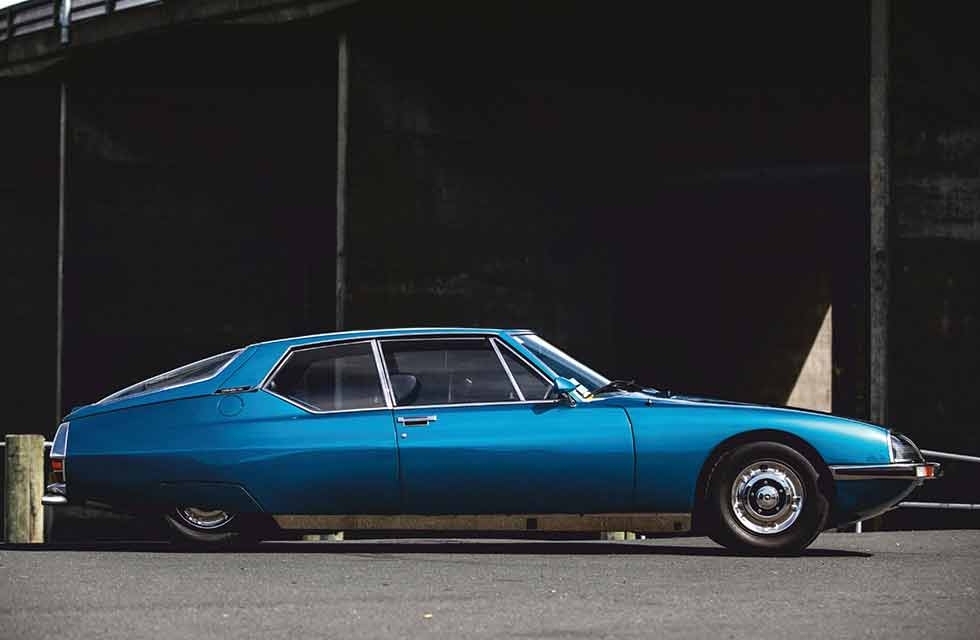 If it hadn’t been real, maybe Lady Penelope would have driven it. Words: Terry Cobham. Photos: Adam Croy.

It sits there almost like something from the future, which it isn’t, and not from the past, which it is. French chic absolutely — as French as Chanel’s little black dress; as mad as a bottle of absinthe, and probably just as much trouble; a transport testament to France, the country that brought us sophisticated stuff such as the guillotine, the pencil sharpener, Etch A Sketch, the frameless parachute, and the world’s first air-powered submarine — all useful to a greater or lesser degree.

The car featured here is the result of all that skill for inventing once it had been put to practical use. In 1960 — almost 60 years ago now — the board of Citroën decided to try to use this very French penchant in a project to create a high-performance version of the then-new and groundbreaking DS. Citroën had the necessary platform but not a suitable motor.

The company looked across the border into Italy. The Italians had invented useful and complicated things, such as the espresso machine, pizza, and ice-cream cones. They had also developed large capacity, powerful motors — a strength that made a collaboration with them desirable. Franco-Italian collaboration during World War II hadn’t proved very successful, so, understandably, they had waited a while before trying again.

Citroën eventually settled on Maserati to join the design team for the new vehicular project. To access the motor necessary to pull the new project along at a speed that would truly make it a grand tourer (GT), Citroën bought Maserati. No French company had produced a large and powerful engine since World War ll due to France’s peculiar horsepower tax and, even though the French had been good at creating quiet and comfortable cars, the smaller engines meant that none of them had exactly set the performance world alight. For this new project, Citroën needed something with more of those very taxable horses; thus, the Maserati solution was born.

The motor that Citroën acquired as a part of the Maserati deal was the quad-cam 2.7-litre V6 unit. This engine eventually had a life in a number of different Maserati models. At that stage, it was producing 130kW — not a huge amount, but much more than Citroën had been used to in the past. It was enough to give the new car a true top speed of 220kph.

The motor that Citroën acquired as a part of the Maserati deal was the quad-cam 2.7-litre V6 petrol unit

The powers that be at Citroën’s head office — representing a mixture of French business interests, but somehow still managing to channel the difference that made Citroën stand out among the world of vehicle manufacturers — ordered the design team to come up with a car that could transport four adults in comfort, non-stop, and at 160kph, from Paris to Monte Carlo; in other words, a true GT.

The project initiated in 1960 saw its fulfilment in 1970 when Citroën launched the SM, a car that was, by the reckoning of so many commentators, light years ahead of its time.

Almost 50 years later, the SM is still one of the 10 most aerodynamically slippery cars of all time. The steering developed for this car is still used today in some high-performance cars, and the suspension was variously used by Rolls-Royce and Mercedes-Benz. Mercedes had tried to develop its own version before throwing in the towel and licensing the Citroën system. Even today, the ride is almost as good as the very best available.

These things are managed by a complex and centralized high-pressure pump system. The power brakes — inboard discs — are operated by the famous Citroën champignon, or ‘mushroom’. The large button on the floor doesn’t actually move towards the floor but responds to the amount of pressure the driver uses and pushes back to give some feel. The suspension — the hydro-pneumatic system already developed by Citroën and for which the DS was so well known — was enhanced even further for this model.

The steering is similarly remotely operated. The problem of ‘torque steer’ from the front driving wheels was overcome by removing all feedback from the road through the steering. The power steering introduced the concept of much assistance at lower speeds and the gradual reduction of this assistance as the speed increased — a radical idea at the time, but now universally used. In today’s cars, these dynamic aspects are all electronically monitored and controlled, but, in 1970, this cutting-edge technology, which worked so well, was mechanical in its operation.

The project initiated in 1960 saw its fulfilment in 1970 when Citroën launched the SM, a car that was, by the reckoning of so many commentators, light years ahead of its time

The headlights remain level using a system of bellows, which operate according to the position of the suspension. Four of the six headlights also turn left and right according to the direction of the steering. The pump that operates all these systems at 2000 psi plus of pressure continually jacks the suspension into place — both front and rear and side to side — as the car is being driven.

The inside of the car is no less suited to the car’s role as a GT. The rear-seat passengers don’t get their own doors but, from there on, it is all comfort. The seats are superbly comfortable and spacious. In the front it is similar; the leather seats — a sort of banana shape — are very comfortable, and the driving position is truly that of a sports touring car.

The oval gauges on the dash are an indication of the French flair that is found everywhere — the French, so known for their design skills, have really shown with this car just how well they do when they try hard. However, some of this ‘flair’ also means that other areas got left behind. The large boot, for example, which would normally be used to house those Louis Vuitton suitcases, is only good for soft bags. Unless, that is, you bought the five-piece leather suitcase set Citroën offered as an option: all the pieces fit together to fill the boot, rather like a jigsaw puzzle. Paris to Monte Carlo non-stop was achieved, but the 90-litre fuel tank means that the boot floor is none too shallow — and then much of the space that is left is taken up by the large spare wheel. It sits in there a bit as if the designers forgot where they were going to put it in the original design.

It didn’t take long for the sporting potential of this car to be tried. Various motor sport teams adapted versions of the car with varying degrees of success. Other owners were known for who they were rather than for any sporting prowess. It was a car enjoyed by rulers — Haile Selassie, Emperor of Ethiopia had one; Idi Amin famously owned seven of them; the French presidential fleet included a convertible and a four-door version. The cars were also popular in Hollywood. This car looks as stunning today as it did in 1970; the rules of physics don’t change, so the teardrop shape is as aerodynamically effective now as it was 50 years ago.

This car looks as stunning today as it did in 1970; the rules of physics don’t change, so the teardrop shape is as aerodynamically effective now as it was 50 years ago.

Classic design remains classic, so, just as anything well designed in the first place continues to look good, the same can be said of the aesthetics of this car. The hydropneumatic suspension still does its job as well as the best, and those ancillaries such as steering and brakes, which were groundbreaking at the car’s release, are still able to perform to the best current standards. Today, these cars are middle-order classics; a very nicely restored example in the UK would cost the equivalent of $115K, although project cars are available from about $15K.

Various social-media groups are available to help with sourcing parts and diagnosing problems and then repairing those problems. Originally, owners would access two different dealerships to handle problems: Maserati for any engine issues and Citroën for the rest. Today, a shortage of spare parts can make things difficult, but the internet comes into its own when a new DIRAVI (direction à rappel asservi; the steering pump) unit or similar is required.

The SM was a world-beater that deserved a better future. Both Citroën and Maserati continued to use parts of this car in their subsequent models, but a combination of the mid-’70s oil crisis, the difficult economy of that era, and the associated major financial troubles of Citroën spelled the end of this amazing vehicle. Once this car was finished, Citroën jettisoned Maserati. What the project left, though, was a car from the 2020s that first saw the light of day in 1970.

ANYTHING BUT A LEMON

One hundred years ago, Andre Citroën, a man of Dutch descent — whose name, incidentally, means ‘lemon’ in Dutch — announced his first car: the Citroën Type A. Citroën was flush with cash from his company’s munitions manufacturing during World War I. Even before the end of the war, he had seen a need that would enable, post-war, his business to progress and the general public to become motorized.

The Citroën Type A was launched in March 1919 — only three months after the armistice — in a showroom on the Champs-Elysées, Paris. To this day, this is a Citroën showroom. In the intervening time between then and now, Citroën has gone from a start-up car manufacturer to being the part of the PSA Group. Along the way, it has launched models such as the Traction Avant and the DS — both world leaders in car technology — the quirky 2CV and derivatives, and the Citroën H van. They all contribute to the French marque’s position in the automotive world. Some of the technology that Citroën invented along the way has helped to cement the company in its place towards the top of the list of automotive innovators.

Today, the cars have lost a lot of the individuality that made them Citroëns, but then the company is no longer a single-marque company. PSA incorporates both the Peugeot and the Citroën brands, and they share technology and projects with a very wide range of vehicle manufacturers. It has been manufacturing cars in China for decades, as part of the Dongfeng Peugeot-Citroën group there.

Citroën may no longer intrigue us with announcements of modern-day versions of the Traction Avant or the continuing innovations of the DS, but it has left us some great classics to examine and even to want to own.