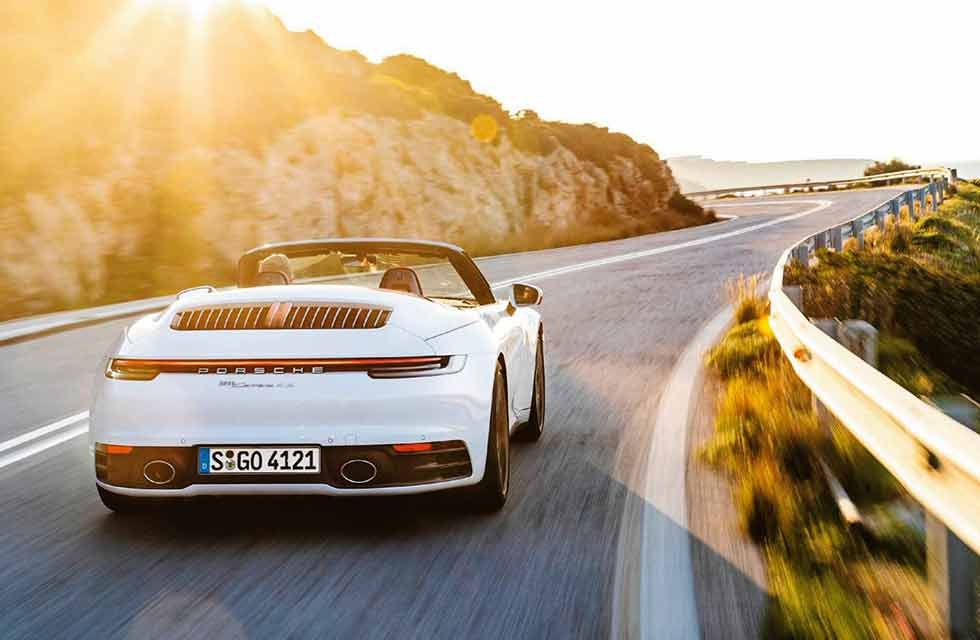 New 911, air-cooled. The latest Carrera Cabriolet’s roof is quieter and even faster than before. But the real revelation comes when you let loose in this ‘soft’ 911.

The new 992 Porsche 911 Carrera 4S Cabriolet produces 444bhp, and makes 391lb ft from 2300rpm. It can scorch from zero to 62mph in 3.8 seconds, and is capable of a pretty refreshing 188mph top speed. This is all very well, but an almost – almost! – equally impressive performance figure is the time it now takes the fabric roof to go from fully closed to please-pass-the-suncream open – at 12 seconds in either direction, it’s a full two seconds swifter than its predecessor, despite the roof being much the same.

Secrets to this extra speed include stronger electric motors and a lighter folding mechanism with reduced moments of inertia. Like before, there are compromises: neatly packaging the Z-fold roof below a metal tonneau cover and above the 3.0-litre flat-six means the rear end has to lift by around 10mm – a tiny figure that does nonetheless make the rear end look bulkier, especially roof-down – and weight increases by 70kg over a 911 coupe owing to extra bracing, taking the 4S to a hardly feathery 1635kg.

But this new soft-top does retain many of the coupe’s strengths. Available in black, red, blue or brown, the fabric roof is stretched taut and crisp to preserve a coupe’s athletic definition, and even matches its 0.30Cd drag figure. That’s primarily due to the improved fit of the fabric skin, a smoothly integrated heated rear window, and the four rigid composite elements that form a seamless arc. An extra fleecy layer sandwiched between the unchanged outer and inner layers is said to drop noise levels by 10 per cent (and roof operation is quieter too).

Out on the road, noise levels really are impressively hushed for a convertible. It’s only above 125mph that conversation either peters out or is absorbed by the awesome Burmester high-end sound system. Even close to V-max, ballooning of the roof isn’t an issue.

More relevantly for law-abiding types, you can still open or close the roof at speeds of up to 32mph, just like the old model, where some soft-tops insist you stop. It’s an invigorating experience, for all the right reasons. With all windows and the top down, this Porsche is an archetypal crossflow convertible that consumes a gallon of fuel every 26 miles along with two fluid ounces of industrial-strength hair gel. To attenuate the storm, you can close just the front windows, or all four windows, or deploy the effective wind deflector that pops up behind you, almost as big as the projection screen at a drivein movie.

In many convertibles you have to manually clip the wind deflector in place, but here it deploys from the rear bulkhead at the press of a button, unless the plus-two rear seats are occupied or the front seats are pushed too far back. It’s much less fiddly, and the benefit is quickly noticeable: even at speed with the wind deflector in place, this feels very much like a coupe with an extra-large sunroof open.

It drives like a coupe too, with a structure that feels barely troubled by the decapitation, even if the fact is that the bodyshell is actually less than half as stiff. Our car gets the delicately implemented optional rear-wheel steering (just a few corners are all it takes to convince you of its worth) and the 10mm lower sports suspension.

The latter option is a first for a 911 Cabriolet, enabled by even faster-acting adaptive dampers. Truth be told, it’s definitely on the firm side around town with its huge 20-inch front and 21-inch rear tyres, so if your focus is low-speed jaunts and laid-back sun-seeking, that set-up is probably worth a swerve.

The payback comes at speed, where the restlessness eases to flow with the surface, and through the twisties. Here the 911 mesmerises with its composure and grip, and a certain playfulness – something the stability control system’s Sport mode indulges for those who prefer safe cornering to unprotected power oversteer.

Let the 3.0-litre boxer engine speak up, and all eyes zoom in on the snarling, growling, blat-blatting two-plus-two with its unmistakable whistling wastegate twang. There’s a little turbo lag, certainly, and this engine can’t do the banshee high-rev thing like the old naturally- aspirated 3.8 could, but it picks up revs like a starving trout rising for a fat mayfly and carries the oomph all the way to the 7500rpm cut-out way above the clouds.

It sounds purposefully bassy and gruff, and makes some pleasing turbo whooshes when you back off the throttle. Most impressive is the way it can feel effortlessly rapid at six tenths without feeling too easy or undemanding in the eye of a ten-tenths mission.

Surely there is little point in waiting for next year’s 600bhp Turbo Cabriolet 992 when this 444bhp version kicks butt like virtually nothing else in its price bracket, and already makes pals at the golf club go green with envy.

For now, only the new eight-speed PDK gearbox is available, but few customers are queuing for the seven-speed manual – only seven per cent of European buyers choose the stick. The dual-clutch PDK’s breadth of ability is such that those figures are hardly surprising: even though the shift paddles instantly connect to your fingertips, they are prone to be overgrown with cobwebs because the shift algorithm is absolutely spot-on. There is one notable exception: Drive in combination with Comfort mode is a dynamically crippling set-up put together exclusively to shine in the emissions and consumption testing process.

Thankfully all it takes to put an end to this nonsense is to dial in Sport. Whisking along country roads with the visor down rarely requires sixth, almost never makes the black box select seventh and totally ignores eighth. A gap left at the front of the transmission case will later be filled with an electric motor as the 911 goes hybrid, but not just yet.

As always, the list of available options easily breaks the bank. The good news is that very few extras are absolutely essential. Among the items definitely not needed for normal driving are PDCC (Dynamic Chassis Control), PCCB (carbon-ceramic brakes), a louder exhaust and the sports suspension we’ve mentioned. Nice to have is the rear-wheel steering, and absolutely imperative are the chin-protecting front-axle lift and dynamic-matrix headlights.

Suckers for driver-assistance systems may specify the most basic aids, but they are not nearly as sophisticated as the higher-tech helpers offered to Cayenne and Panamera clients. Even before you add any options, the 992 911 Carrera 4S Cabriolet costs £108,063, up £9k on a comparable coupe. It’s money well spent if you’re after a fast, entertaining, emotional driving experience with added fresh air and flash. The convertible remains remarkably faithful to the coupe’s dynamic excellence.

True, the design could be a bit bolder, the connectivity is not quite state-of-the-art, and electrification remains an alien term to Porsche’s golden oldie. But soft-top Porsches don’t come much purer than this new arrival that epitomises the core values of the marque.

Carrera 4S Cabriolet takes the 911 experience to another dimension, minimising soft-top compromise to deliver a thrilling drive. It can feel effortlessly rapid at six tenths without feeling too easy or undemanding in the eye of a ten-tenths mission. Fabric roof folds in 12 seconds, two faster than before, at speeds up to 32mph. Cleaner layout is welcome – epilator gearlever is not. Seats now mounted slightly lower, small steering wheel, central tacho – it’s no softie. Ralph had everything; the tan, the hair, the sports car. But no one to share it with. Poor Ralph.

Did that roof reallydrop in 12 seconds? Yep.

It’s stiff in town on lowered sports suspension. No wobbles, though

MINUS –  Heavier; pricier; noisier than a coupe roof-up