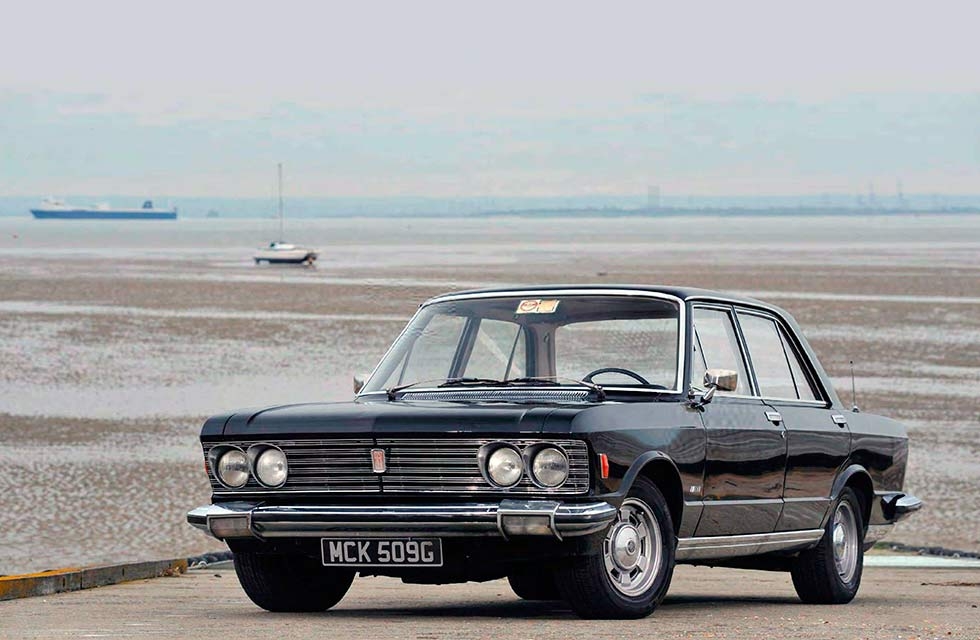 Fiat 130 Saloon Underrated class – Merc Muncher. The 130 was an exceptional luxury flagship for Fiat, but ultimately a commercial flop. On its 50th anniversary, we ask whether is was misconceived or merely misunderstood. Story by Martin Buckley. Photography by Michael Ward.

Conceived in the early 1960s, the Fiat 130, or centotrenta, was a product of the optimism and growth that had fuelled the so-called ‘Italian Economic Miracle’ since the early 1950s. Launched in 1969, its now reached its golden anniversary. Is it still one of the most misunderstood and underrated Fiats of all time?

Misunderstood? I think so. Designed and constructed to the highest contemporary standards, Fiats mission was not to make an Italian Ford Zodiac but to give Italy a top contender in the luxury 3.0-litre saloon class; a true flagship.

Commercially speaking, the 130 was born too late, into a Luxury class suddenly awash with Mercedes-challenging saloons, notably the new Opel Diplomat, BMW 2500/2800 E3 and Jaguar XJ6 Series-1. ALL showed that the European large saloon market had evolved to emphasise driver appeal as much as luxury.

While the momentum was certainly towards ‘sports saloons’, the imposingly angular Fiat 130 remained an essentially formal car, pitched at the man who might employ a driver during the week and take the wheel himself at the weekends. In terms of luxury, detail refinement and roominess, the 130 was really half a class above most of its rivals. It matched Mercedes and perhaps even Rolls-Royce in these regards, rather than BMW, never mind Opel or Ford.

“Had the 130’s creators anticipated Fiat’s 1969 takeover of Lancia, it would perhaps have emerged as a worthy successor to the Flaminia”

Sadly, the market did not see it that way. The Jaguar and BMW went on to define the big saloon landscape for the next decade, long after the 130 saloon had been killed off in 1976. Somehow, although it had many ardent admirers among motoring connoisseurs, no amount of revisions and improvements patched up the 130’s image in the eyes of the wider buying public.

Here, said the critics, was yet another example of the Italians’ inability to address the requirements of buyers in the luxury class. The historical evidence for this peculiarly Italian blind spot was there in the miserable sales figures of the soon-to-die Lancia Flaminia and Alfa Romeo 2600. The big Lancia’s formal dignity was a template for the character of the 130, and one could argue that the Fiat was a kind of rationalised Flaminia. Indeed, had its creators been able to anticipate Fiat’s November 1969 takeover of Lancia, then perhaps the 130 would have emerged as a worthy Lancia-badged Flaminia successor.

When the 130 was born, Dante Giacosa was on the verge of retirement from Fiat after 40 years of service. His influence at Fiat was akin to that of Issigonis at BMC, and like the designer of the Mini, he had little interest in large cars, preferring clever small ones with mass appeal, where the restrictions of size and budget tested the ingenuity of his team. Thus, he harboured grave concerns about the success of the 130, and the project certainly suffered mission creep in terms of size and ambition. Giacosa also feared it would be a distraction when more important new models (like the 124) needed to be brought to market.

Italy’s economic miracle was already showing signs of running out of steam in 1963, when initial thoughts of a successor to a the Fiat 2300 were mooted. The 2300 was a good car but not a great one; a product of mid-1960s thinking, it was neither fast nor refined enough to go head-to-head with the best Mercedes had to offer.

By 1966, the 130’s basic outline had been established: quad headlights set in an assertively angled nose, and a Mercedes-like ‘greenhouse’ with deep windows for good all-round vision. Aurelio Lampredi was charged with creating the V6 engine, a task well within his capabilities as a former Ferrari engine designer. He found himself creating to the 130’s new 2.8-litre 60-degree V6 at the same time as the iron block 2.4-litre 65-degree V6 for the Dino 246 GT and Fiat Dino. That Lampredi designed both is the only common factor between the two units, yet the misconception that the 130 has a Ferrari engine follows it to this day.

The brief for the engine design was that it had to be a refined and sophisticated short- stroke unit with no unnecessary complication: no Dino-like quad camshafts but just a single cam on each bank, driven by a toothed rubber belt. Softly tuned on its 8.3:1 compression ratio, this was no sports car engine but an Italian interpretation of a Cadillac or Rolls-Royce power unit. It was naturally paired with an automatic gearbox, making the 130 the first Fiat – indeed the first Italian car of any description – to be designed around one. For traditionalists, there was also a ZF five-speed manual option.

Fiat put a lot of thought into the 130’s suspension design. At the front, the torsion bars gave 6.3 inches of movement and were damped by easy-to-service struts. These were to be found at the rear too, but passively ‘steered’ by track rods to give the rear suspension favourable geometry in all functions of roll and bump, controlling toe-in effect to maximum advantage. With its fixed-length solid driveshafts doubling as track control arms – and splayed pressed steel semi-trailing arms carrying coil springs – this patented independent rear suspension (shared with 2.4-litre Fiat Dinos) was probably the most sophisticated to be found on any saloon car at the time.

With standard Campagnolo alloy wheels, vented disc brakes, rear window blinds and two-tone horns, the 130 had the most complete-sounding specification of any saloon in Europe, giving credence to the claim that it was the first Fiat to be created with cost as a secondary consideration. Luxuries like electric windows and power steering were optional.

Production got underway in May 1969 at Fiat’s Rivalta factory. Early plans to build 250 cars a day were soon reduced to 100, with 50 being the figure more often mentioned. Deliveries did not begin until July 1969, mainly to Italian business leaders and the Vatican.

However, despite a clever marketing campaign aimed at a demanding and sophisticated clientele, acceptance was patchy. Reports criticised the car’s lack of urge: it seemed that 2.8 litres and 140hp were not enough to give the 130 the authority on the road it deserved, no matter how exceptional its chassis behaviour and refinement was said to be.

Fiat’s anxiety that the 130 should be as sorted as possible before exports started in earnest meant that these early cars were rarely seen outside the domestic market. No right-hand drive 2.8 saloons were ever built but, while the definitive 130 ‘B’ 3200 was prepared, an uprated interim version of the 2.8 was announced, with little fanfare, in November 1970. Visually indistinguishable externally, significant changes had been wrought under the bonnet, not only realising more power – 160bhp at 5800rpm – but also to cure the hot starting problems that had bedevilled the early cars. The power increase came by way of a higher 9:1 compression ratio, a freer-flowing exhaust manifold and bigger Weber 45DFC carb, replacing the 42DFC.

Plans for a more extensively revised car, with a significantly bigger engine, were already underway. There would be no significant sheet metal changes to the saloon; those looking for a prettier and less formal car would have been invited to consider the new Fiat 130 Coupe, launched at the same time as the 3200 saloon in September 1971. The only way of telling a 2.8 130 saloon from a 3.2 was the discreet ‘3200’ badge on the bootlid and the fact that the plastic Fiat badges on the front wings had been banished.

If not quite unique in the UK, then Thomas Du Capite’s early 2.8 saloon is certainly very rare. It has an early chassis number and the sober black paintwork tends to suggest it started life as a ministerial vehicle. Trimmed in something close to West of England wool cloth (leather was extra], it has superbly comfortable seats, lavish rear legroom and a fully adjustable driving position (steering column reach and rake, plus seat height).

The main visual difference compared to the 3.2-litre 130 is the dashboard, with its 220km/h ribbon speedo, a dated touch at a time when the trend was very much back to circular dials. Even so, it’s rationally laid out and fully instrumented with a rev counter (yellow-lined at 6000rpm), separate oil pressure, water temperature gauges and a self-seeking radio incorporated into the dash. Fiat thought long and hard about the 130’s heating and ventilation, with a fully engineered and integrated system designed to allow separate upper and lower air streams. The centre console houses a chrome gear selector and ‘PRND21’ quadrant flanked by cold start and hand throttle controls. The rheostat-adjustable windscreen wipers have a Mercedes-like ‘clap-hands’ action.

Underway, the commanding driving position puts you at ease and there is superb vision all round. Even the 3.2-litre 130 was brisk rather than fast, but the 2.8 still feels crisp and entirely adequate. It sweeps imperiously along, with a refined growl from the engine and a throaty rasp from the twin-pipe exhausts. The smooth willingness of the engine masks the car’s under-gearing, and neither the slightly jerky Borg-Warner automatic, nor the powerful but spongy-feeling brakes were ever the best thing about these cars. The dampers feel a little tired on this example but there’s plenty grip and composure, and a supple ride. Certainly the definitive 3.2-litre 130B was a better car but it’s surprising how complete, sophisticated and well-built the 2.8 feels.

In the world of 130s, it’s the beautiful coupe that gets all the attention but for me, the saloon is the original concept, and all the more fascinating in this rare 2.8 form. Handsome, luxurious and technically excellent, the minor tragedy of the 130 was that it was released before being fully mature, by a company that was on uncertain ground when it came to creating big, expensive cars. Even if the 1970s fuel crisis had not sealed its fate, an expensive saloon with a Fiat badge was always going to have a lot to prove.

Early 130 may not drive vivaciously, but its refined and has sophisticated, cosseting suspension