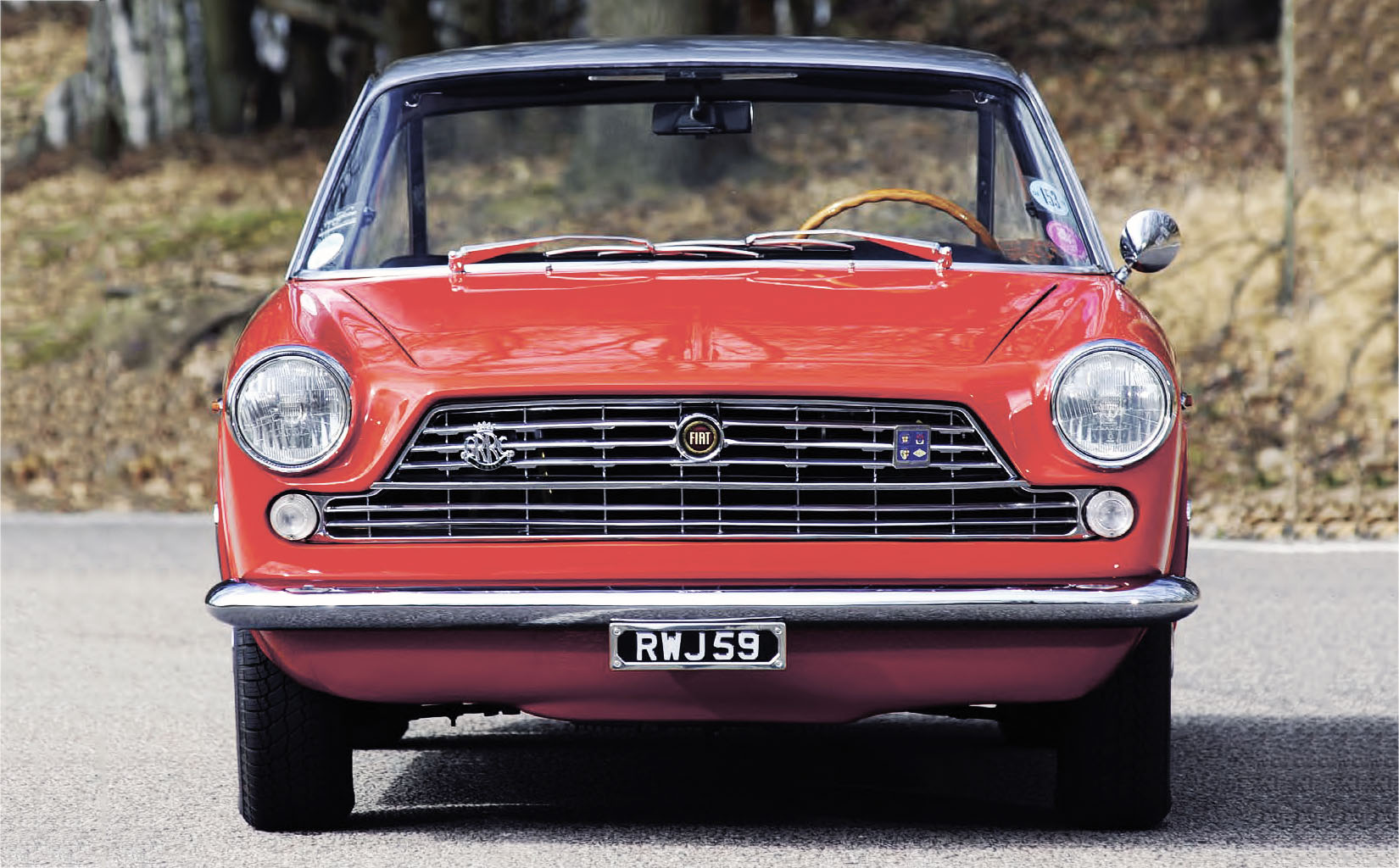 As it happens, the two cars we’re scheduled to photograph today for Auto Italia arrive at the same time. You couldn’t describe the matt black Lamborghini Huracán we have on loan today as shy and retiring, but curiously, none of the crowd of people around us is giving it any attention. That’s because it’s being comprehensively outshone by the other car we’ve asked to attend our photo shoot. Who’d have tipped a Fiat to be the car to upstage a Lambo? But then, this isn’t just any Fiat: in my book the 2300S Coupe one of the most appealing cars ever to wear a Fiat badge. 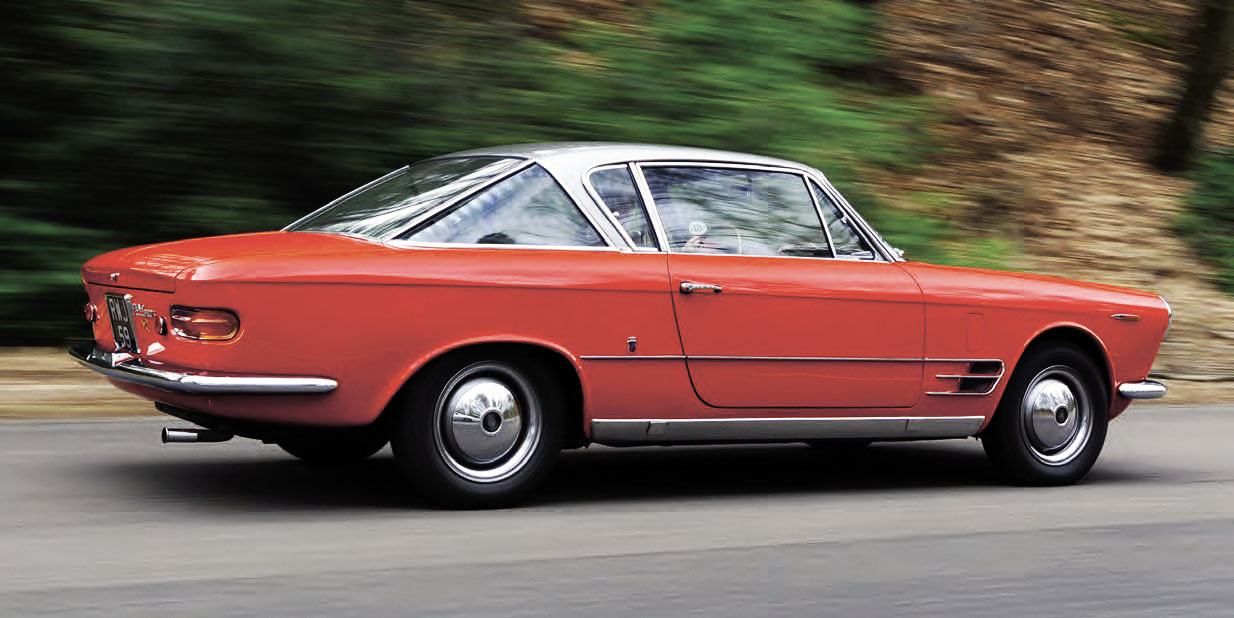 Not only does the Coupe look stunning, its quirkiness and individuality make it stand out: it’s really quite unlike any other car. It demands you pay it attention – and then rewards you royally for your consideration. That charismatic shape, penned by Sergio Sartorelli while at Ghia, first saw the light of day at the 1960 Turin Motor Show, when Ghia displayed it as the 2100S Coupe. Fiat adopted the design pretty much as it was, and within a year, had put it on sale as the 2300 Coupe.

Since Ghia didn’t have the capacity to produce a car like this, the actual construction work was subcontracted out to OSI (Officine Stampaggi Industriali) of Turin, which had only recently been set up by Ghia’s expresident, Luigi Segre. Over the next seven years, something like 7000 Coupes were produced, many of which had the twin-carb ‘S’ engine that boasted 150bhp (versus 117bhp for the singlecarb 2300) courtesy of some warming-over by Abarth. This gorgeous 1966 2300S is owned by Peter Jerram, who has a direct connection with Fiat’s 2300 Coupe from his childhood. “My father always owned Jags,” he remembers, “but one day, probably in around 1963, we were passing Radbourne Garage in Holland Park and he saw a Fiat 2300 Coupe there. He decided to take a test drive, but since the Fiat was twice the price of an E-Type at the time, he never did buy it. That was the last time I ever saw a 2300 Coupe in the flesh, until I saw this one!” 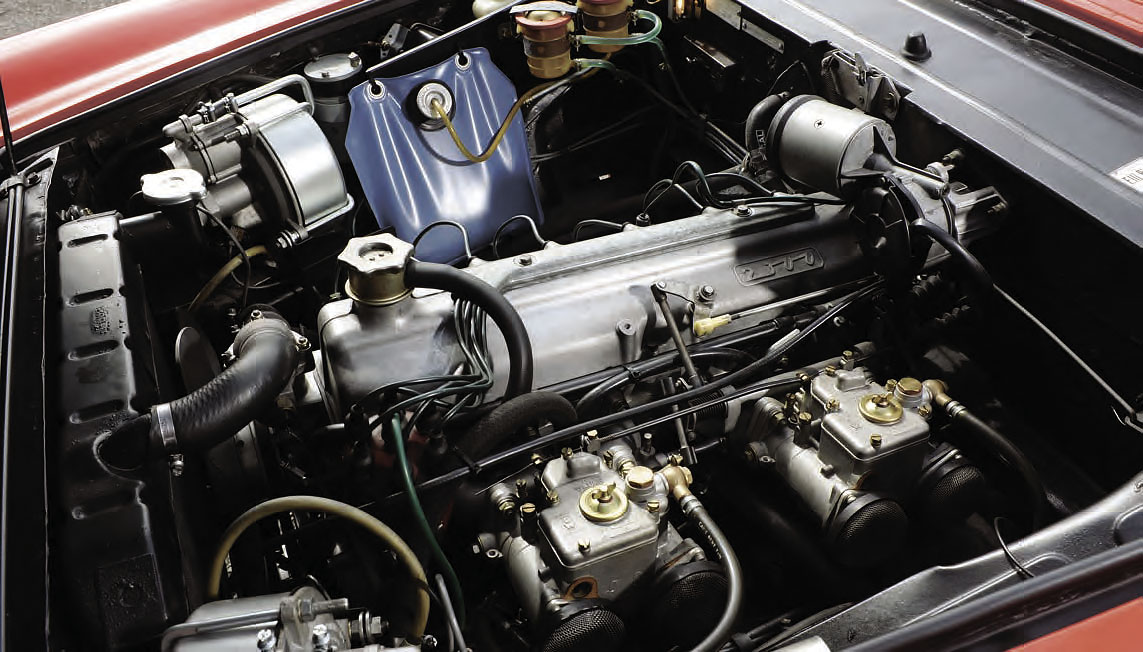 Peter really wasn’t looking for a 2300 Coupe. He was actually on the lookout for a Fiat Dino (his dream car ever since seeing The Italian Job) – although he would also have settled for an Alfa Giulia Sprint. But when he saw this 1966 Fiat Ghia Coupe up for sale, the memories flooded back and he knew he had to have it. This particular 2300S started out in life in Italy, going through the hands of two owners in Turin, before emigrating to France. And it was in Paris that Peter saw it, back in 2012, on sale at the French importer of Morgans. Very quickly, it found its way over to the UK. “I thought it was in good nick,” recalls Peter, “but when we got it up on the ramp back home, we found there was so much rust that you could put your fist through the sills. All the suspension bushes were shot, too.” 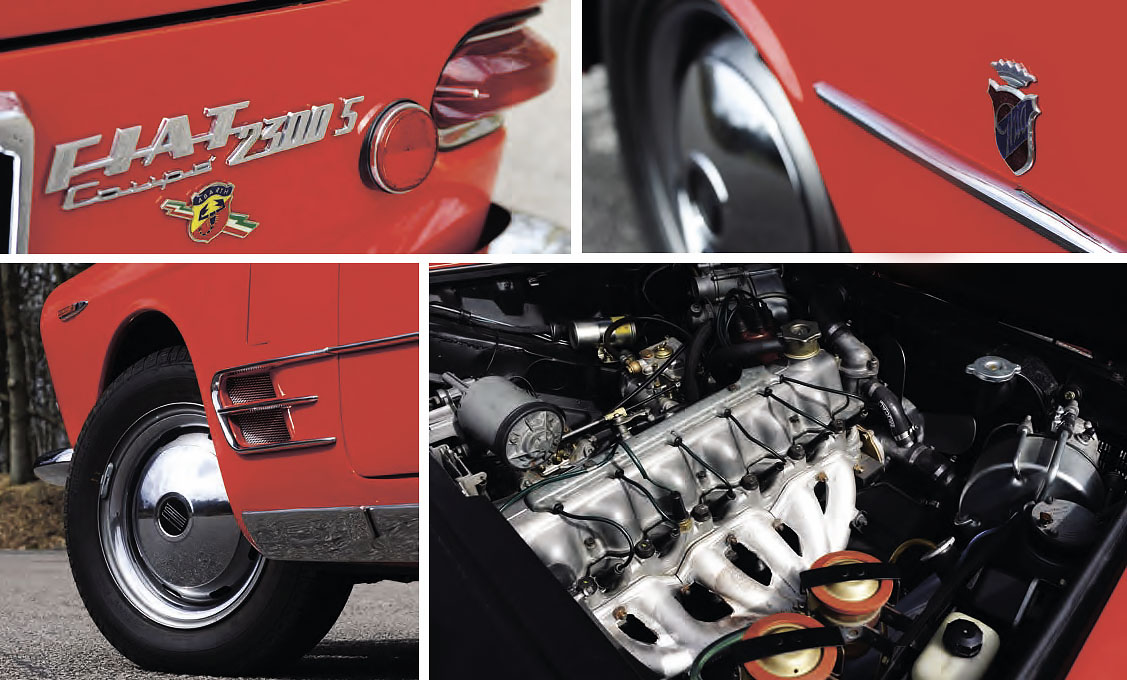 BELOW: Abarth offered a tuning kit for the Fiat 2300 that consisted of a high lift camshaft, increased compression ratio and twin carburetors

It didn’t end there. The engine had to be taken out because the head gasket and cylinder head were about to go. In fact, Peter decided on a complete engine rebuild. It was re-sleeved, and the pair of twin-choke Weber 38 carbs were overhauled by Southern Carburettors. The engine bay now looks amazing, although it’s not the powerplant that immediately leaps out at you – it’s the two huge Bendix brake servos that dominate the view. And guess what – they were leaking as well!

In any car like this, you expect some restoration challenges, but the 2300S presented a whole host of particularly knotty ones. Luckily none of these proved unsolvable. Parts aren’t exactly easy for the 2300 these days, but happily there is a specialist in the Netherlands called Classic Passion which does carry quite a few bits. For instance, a trim kit supplied by the Dutch firm provided the new lining for Peter’s boot. Those worn suspension bushes proved awkward to find replacements for, but some were eventually sourced via Ricambio, while renowned Fiat and Abarth specialist Middle Barton also helped with a few bits. The front wheelarches weren’t in great shape either, ravaged as they were by rust. Luckily, one of them was about three-quarters intact, so Peter was able to get a pair fabricated from that. There are still a couple of jobs to do, such as overhauling the rear suspension and renewing the exhaust. 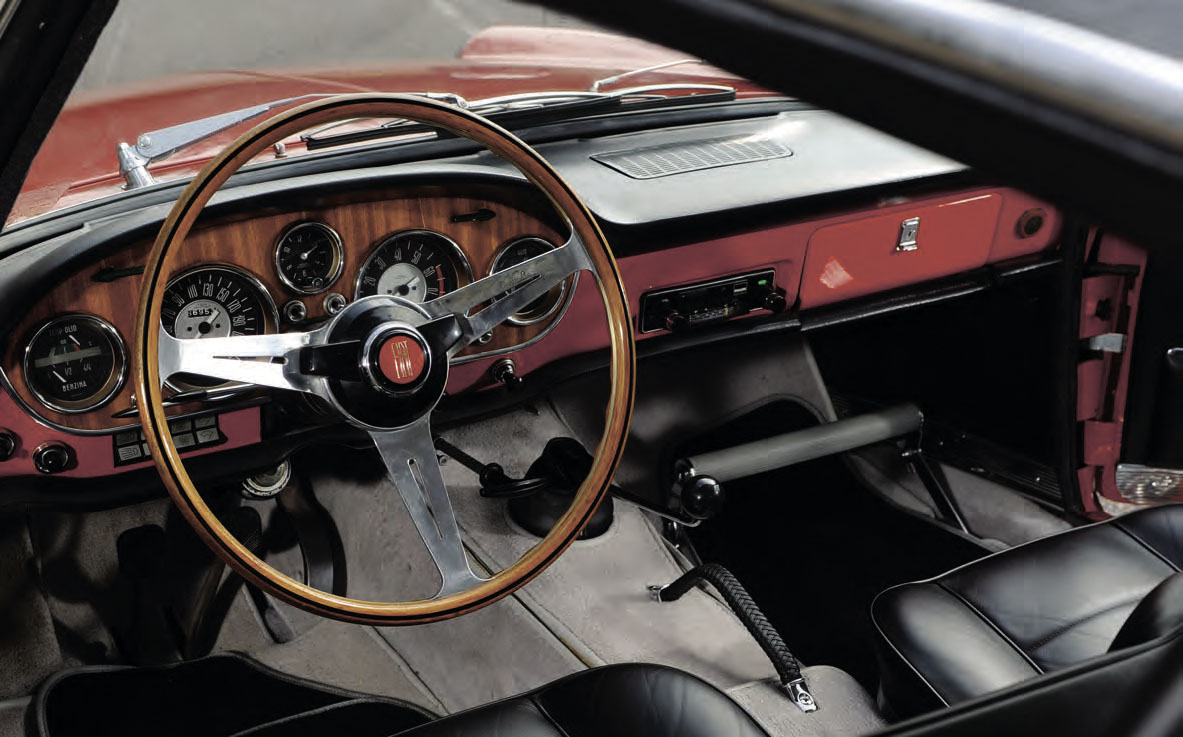 The bodywork and paint’s all done though, and it looks superb thanks to the work of Autofficina (which also looks after Peter’s collection of Ferraris). The particular shade of red is not original, but it’s very close to the factory colour – actually it’s a Ferrari paint called Scuderia Rosso. But it’s the roof that raises the eyebrows: it was Peter’s idea to paint it non-original, contrasting silver, initially an idea that drew scepticism from everyone whom he canvassed. But there’s no question that it works: the Grigio Nuvolari roof (another Ferrari colour) looks absolutely right.

Looking around the car at the stylish detail that surfaces wherever your eye falls, quirks and curiosities abound. Inside the car, you’ll find such strange and wondrous period items as a rear fan demister; a footrest for the front passenger, and a hand-rail too; and two-tone horns to play with. The quintet of Veglia Borletti gauges look stunning in the wooden dashboard, and are set off perfectly by the Nardi woodrim steering wheel. The front seats are beautifully engineered with chromed metalwork that looks like it belongs in an aircraft.

There’s so much to appreciate on the exterior, too. The chrome-trimmed engine cooling vents and sills look stunning, the grille is gorgeous, and ingenious chrome strips create a wraparound effect for the rear screen. By the way, the Abarth badges that adorn Peter’s car are justified, he says, because of the Abarth head and sump that the 2300S uses. 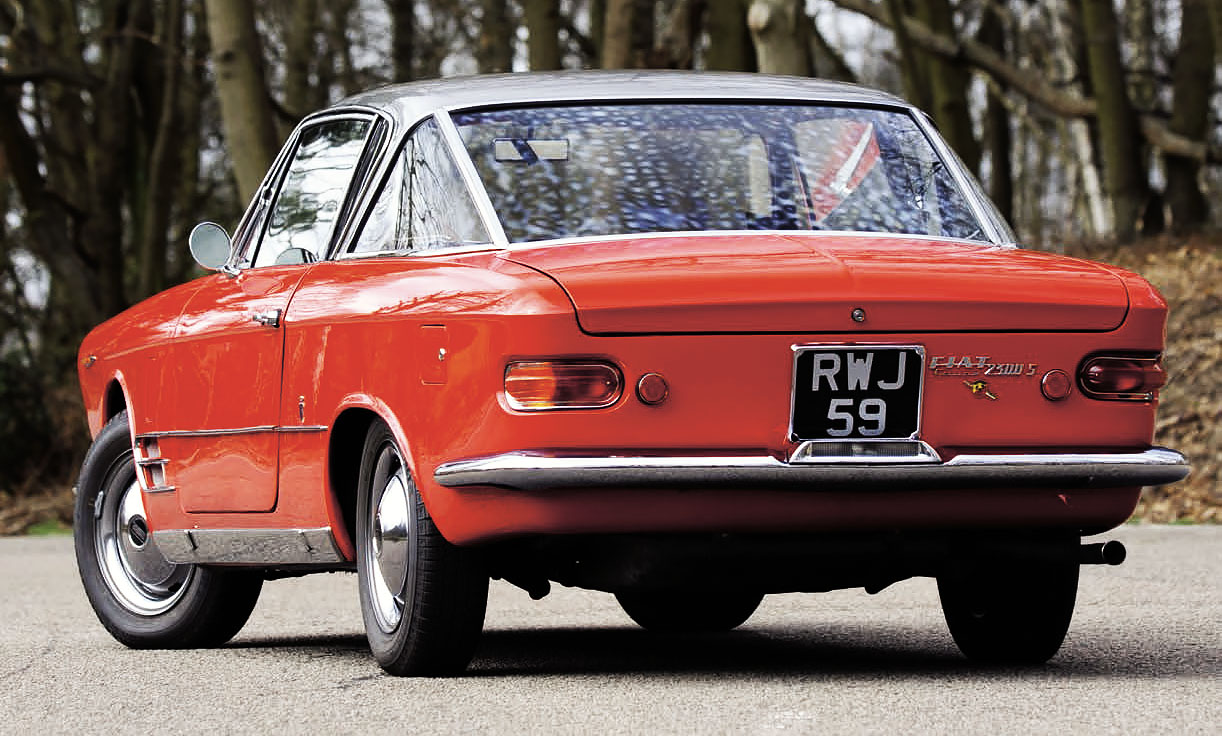 So how does it drive? Really rather magnificently. Turn the ignition key and you’re rewarded by the silky sound of one of the great six-cylinder engines. Designed by ex-Ferrari engineer Aurelio Lampredi, the straight-six OHV pushrod powerplant is joyfully smooth. Emitting a low growl on start-up and plenty of valve clatter at speed, it’s a wonderfully torquey unit. At 80- 90mph, it feels utterly at ease.

The pedals are floor-hinged, Alfa-style, and work very well. The gear lever is canted over quite severely, but the gear engagement functions better than you might imagine, with four speeds to play with. Accelerating through the gears it can rev to 6500rpm, but it really doesn’t need to be extended so far, and is at its best delivering easy, low-rev cruising ability. In fact, ‘easy cruising’ sums up this car. The very large, high-set steering wheel is low-geared and pretty heavy with its lack of power assistance, so you’re kind of forced to take things easy. Around corners, the Continental 165 radial tyres provide enough feedback of what’s going on, despite the limitations of the leafsprung rear end, and the tail can be persuaded to come around gently and predictably.

The brakes – despite being discs all round and benefiting from those big Bendix servos – are heart-of- 1960s in feel, which means a little spongy on initial application and not quite as effective as you’d like for the pressure you’re applying.

This is a relaxing car to drive, on the whole, although wind noise is certainly present at high speeds. Visibility through that charismatic glasshouse it about as good you’ll ever get. And the view down the bonnet, framed by that sharp-edged wing top line, is so evocative of La Dolce Vita touring, 1960s-style.

“It looks and feels like a poor man’s Ferrari,” says Peter, who is more qualified to know than most, as he owns quite a few Ferraris as well as this Fiat. He’s driven it to the Goodwood Revival, where sadly it broke down, but it has now been on quite a few trips out without problem.

“If I’d known how much time and money it would take to get it to this state, I would never have bought it in the first place!” says Peter. “But do I regret it? No! It’s such a rare thing that attracts so much attention, and it drives so nicely.”

I concur on both scores. It’s charming, relaxing to drive and, on the attention-grabbing front, we have all the evidence we need from parking it next to that Lamborghini Huracán. Poor man’s Ferrari? Perhaps not so much the ‘poor’ relation after all. 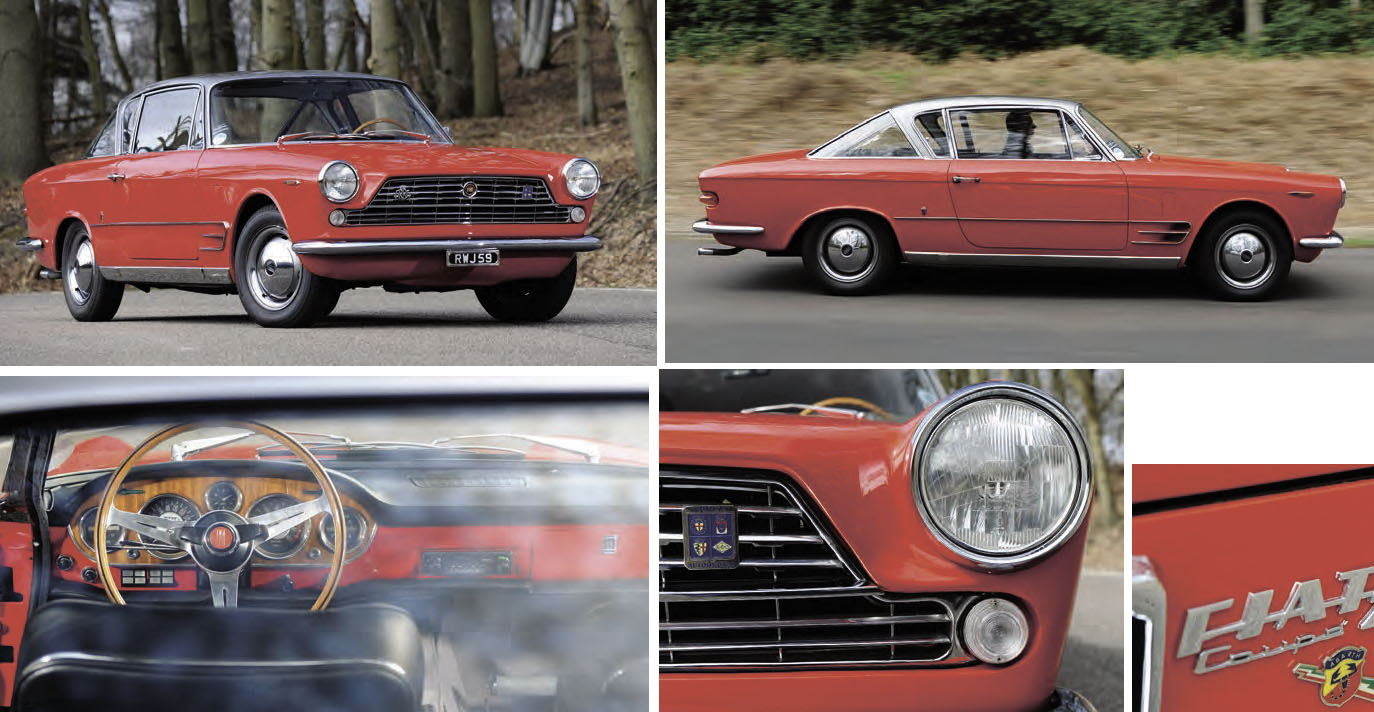