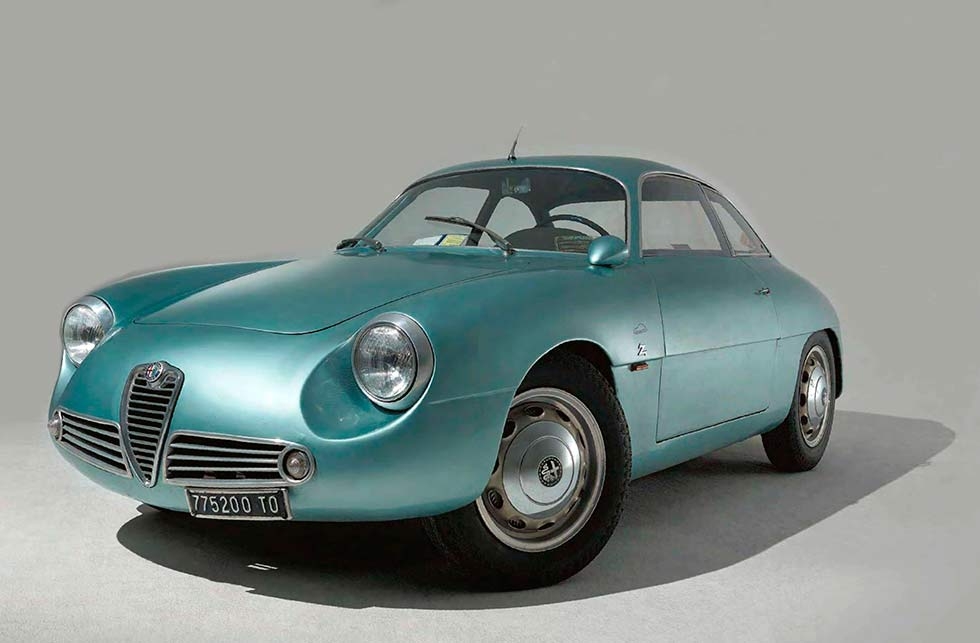 Vault Find Alfa-Romeo Giulietta SZ. Entombed for 25 years, now rescued. Incredibly, this Alfa Giulietta SZ has emerged from 25 years in oblivion, so entombed in an underground vault that it had to be hoisted out. Not so much a barn find as a crypt find, then – and it’s in sensationally original condition. Story by Ruoteclassiche/Carlo Di Giusto. Images by Ruoteclassiche/Paolo Carlini.

At first sight, the house at 50 Via Candiolo, Turin seems to have only one storey. Surrounded by imposingly tall, impersonal blocks of flats, it looks even lower than it actually is. Passing by, you would barely notice this little house stuck between two concrete monsters, with its shutters pulled rigidly down and its garden gone to seed. Perhaps the old red Renault parked in the backyard, or the Fiat 500 and Panda out front might have caught your attention – all of them neglected, long off the road and apparently forgotten.

“Covered in layers of dust, it looked slate-grey when it was pulled out. Under it all was metallic light blue paint”

But the crumbling house was not as abandoned as it seemed – and it also possessed an underground secret. The house’s owner, now sadly passed away, was one Osvaldo Avalle. Fully aware that the Turin area he was living in was becoming less and less safe, Signor Avalle decided to create a huge secret shelter below ground level, accessed by a lift from the garden, half-hidden behind a tree. That old Fiat Panda was not parked there by chance. It was used to conceal, even to block, the opening. Osvaldo’s stage set was very effective, since nobody ever suspected the existence of his underground garage and its contents. Only a few were even aware of what was in Osvaldo’s back shed, which was once home to his electrical shop.

Osvaldo more or less retired from that business in 2010, deciding to concentrate on cars, which were his real passion. In his final years, he devoted himself to working on both his and his few friends’ cars.

After a while, he started to sell off his collection, and then he stopped seeing people. It was said he was very ill with diabetes. His foot was eventually amputated; apparently his only concern, once he’d left the operating room, was whether or not he’d be able to continue driving.

Cars and racing were a true obsession for him, arguably the only reason for life; something in the blood, you might say. Very few people know that his father Mario and uncle Piero were both skilful drivers, having raced in various Mille Miglia events during the late 1940s and early 1950s, often driving cars that they had assembled themselves. Mario excelled in the up-to-750CC sports car category. In the 1947 edition of the Mille Miglia, for instance, he left in his wake no fewer than 40 other competitors. Tragically Piero lost his life in the 1952 Mille Miglia, together with his co-driver Sandro Fiorio (the man in charge of public relations at Lancia, and the father of Cesare Fiorio, the legendary Lancia rally team manager). That sad occurrence marked the end of a successful, promising career, and brought to an end his brother Mario’s sporting ambitions. That was it: no more racing.

Osvaldo Avalle, who was born in 1942, sadly died in August 2018 at the age of 76, leaving no will and having no heirs. The Italian government immediately took possession of his car collection – but more on that later. One man who knew Avalle well is 25-year-old Simone Ingrassia, a real car enthusiast who was a regular at Osvaldo’s shop ever since he was a child. “This area of Turin became more and more dangerous. That’s why Osvaldo decided to build a bunker. Access was only through a narrow staircase from his house, or through an elevator located in his backyard, well out of the public eye. The Giulietta SZ was already there in 1984, when my uncle took his Dino to him. Osvaldo spent all his time in the shed, working on his and on his customers’ cars. His place was an institution in Mirafiori – an old-time workshop for electrical repairs. The last time I saw him was in March 2018. He had changed a lot, but his determination remained the same. I asked him if he had something to sell, and he offered me two Fiat 500s, one with a special engine. In his way, Osvaldo was a hero from another time, for me – genuinely and truly passionate about cars.”

The contents of the hidden shelter were uncovered in November of last year, some three months after the owner had passed away. There were vain attempts to remove the locks to enable the cars to be extracted from the bunker. After chopping down an adjacent tree, various people in yellow overalls, car transporters, cranes and recovery teams all swooped in. What they managed to bring out was a stunning collection of dream cars: a Cisitalia 202 Cabriolet, a Fiat 500 Sport (built by his father Mario), a 1961 Moretti spider, several Panhard 24 CTs and quite a few more old wrecks.

But it was the emergence of this Alfa Romeo Giulietta SZ, hauled out from the secret shelter under Osvaldo’s home, that was the real find. News of the discovery quickly spread around the world. Covered in a thick layer of dust, it looked slate-grey when it was pulled out and loaded on to the transporter. In fact, under the layers of grime was metallic light blue paint.

The story of SZ chassis number 101.2600101 goes like this. It was sold on 19 February 1962 by a Turin- based Alfa Romeo dealer called Dario Vico, ordered in delicate sky-blue livery with steel and aluminium Borrani Record wheels. That colour scheme and that specification told a story that, despite the SZ being eminently suited to competition work, this was very much not bought as a racing car, but a pure road machine. The 21-year Torinese man who originally ordered the SZ definitely did not plan on racing it. He didn’t even bother to remove the ‘in rondaggio’ (‘running-in’) stickers on the rear window and windscreen. At some point, he also installed an Autovox car radio inside the glove compartment, a roof-mounted aerial and two Swedish-made ‘Sakerhetsbalte’ safely belts. The current number plate is not the original one, though; TO 427125 was apparently lost, so the owner applied for a new one in 1966. One thing that is clear is that the car was always maintained with maximum care.

Giulietta SZ 00101 was already in Osvaldo Avalle’s shop by 1984. He filed for homologation with ASI (Italy’s historical car register) and the documentation was duly signed by ASI’s technical secretary, Federico Robutti. However, the SZ pretty much disappeared from sight as soon as the papers were received in November 1985. Its yearly insurance slips were carefully preserved, as well as all other paperwork, so that we can tell that the car was road-legal up until 1995. When it was discovered in 2018, the odometer read 94,790km – a mere 3700km more than in 1987.

Even ignoring its remarkable state of preservation, this SZ is a true rarity, being one of only i6g original- shape (pre-Coda Tronca) SZs built between 1960 and 1961. Zagato’s construction method of aluminium bodywork over a tubular steel frame made it an extremely lightweight machine; unladen, it weighed a mere 854kg, helped by light Plexiglas windows and alloy wheels. The strict two-seater interior is minimally trimmed, with a lightweight glassfibre dashboard, skimpy seats and thin doors.

Thanks to the low weight and good aerodynamics, it could reach 124mph despite only having a 1290cc, 97hp engine. To drive, the SZ was essentially a barely-contained race car, with very agile handling and sharp steering, although it was hardly a refined cruising machine.

In January 2019, after having had its layers of dust accumulated over the years wiped off, the Giulietta SZ and 12 other cars belonging to Avalle were put up for sale in a government auction as title-free inheritance goods’. The official auction estimate was comically low – 14,000 euros – and it was no surprise that a 15-minute bidding war ensued in the sale room. The winner of this frenzied action ended up being an Italian classic car dealer called Silvauto, which bid a huge 567,000 euros (although the eventual price paid was allegedly even higher than that). This is a record value for an Alfa Romeo Giulietta SZ, but clearly justified by the car’s superbly original condition. For now, this historic machine has been added to the go-strong collection of Silvauto’s Dario Belloli. Perhaps it will be put up for sale, perhaps it will be retained.

What is certain is that the car will not suffer any kind of restoration, but kept in its current, beautifully preserved condition. This is something that Zagato’s current Marketing and Brand Manager, Paolo Di Taranto, fully supports, having viewed for himself its remarkable state of conservation. We can only add our own seal of approval that this historic machine will be preserved as it is.

Untouched engine bay includes a sticker showing air filter replacement at 91,000km in 1967 and an oil change at 94,000km in 1994. The first owner had no intention of racing this car. He didn’t even bother removing the ‘running in’ stickers from the window.

BRAKES: Drums all round