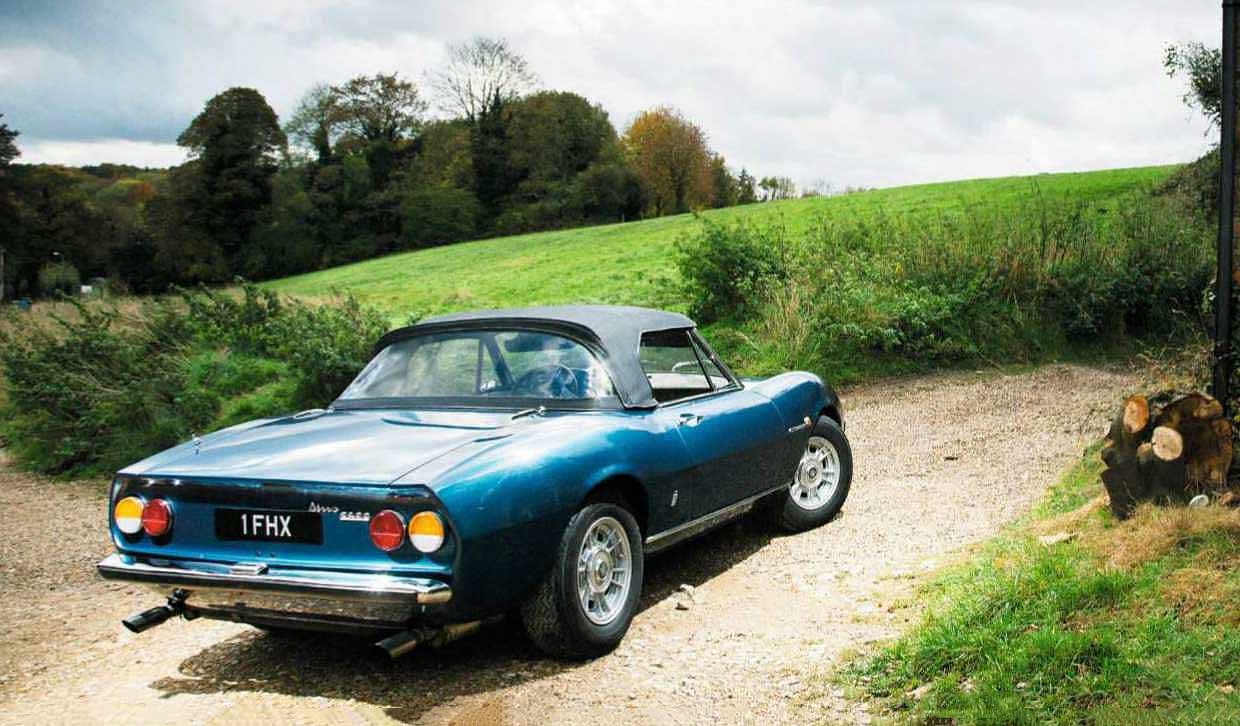 Fiat Dino Spider The other Dino

What was it about this sports car with a humble Fiat badge on its nose that prompted its stylist Sergio Pininfarina – who would no doubt have had a fleet of Ferraris at his disposal – to keep it for himself? It’s a question that swirls around in my head as I contemplate taking it for a drive.

Well, there’s the obvious appeal – to my eyes it’s one of the most elegant designs of all time. Maybe it’s odd to describe a car as sexy, but this Pininfarina sculpture oozes curvaceous allure.

Just look at the nose, that pouting grille, the way that the thin chrome bumpers blend in, the sweep of the curves over the front wings, the feline rear haunches and the circular Ferrari-style tail lights, all finished of by the delightful Cromadora Elektron magnesium alloy wheels. Not a bad start.

After a few more moments spent swooning, I open the driver’s door and slide into the driver’s seat. The interior is trimmed in vinyl – this is a Fiat not a Ferrari after all, and leather wasn’t an option even for Sergio – but it’s cosy and comfortable. I’m drawn to the unusual yet attractive woodrim steering wheel; it’s gently dished with rounded aluminium spokes that are slotted for lightness, not drilled. The instrumentation is clustered in a pod in front of me and all the dials are easy to see through the wheel.

I twist the key, the V6 fires up instantly and settles into a steady 800rpm tick-over. It’s a true race-bred unit – its origins lie in a project that used Fiat’s mass-production muscle to homologate the Ferrari 2.0-litre V6 engine for Formula 2, which required a minimum run of 500 production units per year. After a warmly received introduction at the 1966 Turin show, the Fiat Dino was substantially revised in 1969 with cylinder block material changed from aluminium to iron and capacity enlarged to 2418cc. Today, this late-1970 Spider is enticing me with a smooth, high-pitched whine from its double overhead camshafts per bank, rather than goading me with an overly rorty exhaust snarl.

Noticing how light the clutch is I pull the short gearstick across towards me and back into a dog-leg first position, then accelerate away steadily. Thoroughbred the V6 may be, but its Dinoplex electronic ignition unit – a world-first application in the 2.0-litre – tames any baulking primadonnery. After testing the bespoke Magneti Marelli system’s smoothness within first gear’s rev range I move the lever, clack, clack, clack, into second. On Hertfordshire’s empty country roads the Spider picks up speed purposefully and before long I’m cruising along effortlessly in fifth.

The refinement, ride quality and high-speed stability don’t take long to impress me. Although the 2.0-litre Dinos had a leaf-sprung live rear axle, the 2.4-litre cars had an independent rear end with coil springs, two heavy-duty dampers to replace the previous four, and a Fiat 130-sourced anti-roll bar. As a result, the Dino’s supple ride is more like a Jaguar XJ-S than an MGB or Triumph TR6. And there’s a total lack of scuttle shake compared to, say, an Alfa Spider. Structural solidity feels more like that of a coupé than a roadster, and triple-digit speeds are less frantic than they are in any convertible contemporary. Where permitted this car will cruise comfortably at 130mph all day long.

But while the Spider is quite appropriate for long trips it was primarily designed as a bonafide sports car, and I feel intimately connected to the road; it’s softly sprung but firmly damped. The stopping power of the ventilated disc brakes is one of the Dino’s best attributes – it shares the same two-pot Girling calipers as the much heavier Maserati Ghibli. Under hard braking the Dino stays settled, turns in precisely and remains completely planted as I accelerate away. Turning in early reveals a remarkable tenacity until I deliberately provoke the rear tyres to break away. There’s plenty of fun to be had below licence-losing speeds.

Yet Pininfarina only kept chassis 1239 for six months before lending it to Bernard Cahier. The former Porsche works driver turned motor sport photojournalist was on first-name terms with the greats of the time, and got on so well with Pininfarina that when he revealed how much he liked the car, Pininfarina gifted it to him.

In Mike Morris’s book Fiat Dino, Ferrari By Another Name it is suggested that Cahier and the Dino lived in California where it was registered, but this car always resided at his home in Evian, France. According to Cahier’s son Paul-Henri, it was through a friendship with Carroll Shelby that his father was able to obtain the Californian registration ‘PININ’.

When current owner Nigel Knight spoke to Paolo Pininfarina he recalled that Cahier didn’t use the car much, reserving it for long drives on sunny days. He also remembers that the Dino was silver which surprised Knight, who had assumed the car had been Sera Blue from new. Indeed, when he took the car to have wax injected into the box sections the original silver was found beneath. The repaint must have taken place early in the Dino’s life because Paul- Henri only ever remembers it being blue.

In 1995 Cahier sold the Dino to his racing driver friend Grahame Bryant, who also used it almost exclusively for high days and holidays. From Bryant it went through several UK-based owners before one gave way to Knight’s badgering to let him buy it in March 2007. Today, it’s easy to see why he was so keen – the Dino is proving to be a real marvel worthy of its exalted associations. There’s absolutely no play in the steering, which is worm and roller with a Gemmer steering box. It’s heavy but that is only bothersome at slow speeds. Accelerating out of a junction with verve, the Borg-Warner limited-slip differential shares out the grip between the two rear 205/70×14 Pirellis. The ZF S5-18/3 gearbox is a delight and the pedals are well placed for heel-and-toe work. Going back up through the gearbox and standing on the throttle between gear changes rewards you with a gruff wail that manages to be more sophisticated than a straight four-cylinder screamer, yet more aggressive than any road-silenced small-block V8.

When they were new the ‘Ferrari’ Dino 246GT was quoted at 195bhp and the Fiat Dino 180bhp, yet the engines were identical bar a slight difference in cam profiles – and even then the overlap remained the same. Indeed, Fiat later confirmed that the Ferrari’s figures had been reached via the more generous SAE method and the Fiat’s by DIN – when adjusted the Spider would have a healthier 188bhp. Any remaining discrepancy not accounted for by the cam profiles probably stems from the exhaust layout as dictated by the engine positioning, with top speed differences attributed to body shape rather than core muscle.

Also suggestive of an attempt to avoid Maranelese moccasins being trodden on is the wastefully low fifth gear, which was quoted to give less than 10mph more than fourth at the top end. As a result, Knight decided to have the optional lower-ratio cog fitted. Now the car is less busy at high speeds; when I’m doing 70mph on the motorway the engine is pulling 300-400rpm less than Knight says it used to. ‘Originally, it was pulling around 7450rpm at 132mph, while maximum power is developed at 6600rpm,’ says Knight. ‘Now it will do around 140mph. This certainly points to the possibility that the manufacturers were intent on maintaining a gap between the Ferrari and the Fiat.’

But to dismiss the Dino Spider as an inferior relation – whether honestly or artificially – is to do it a grand disservice. That stands up empirically too – ten years ago, a 2.4 Spider was worth 36% of a 246GTS; today that figure is 46%. But values and rarity aren’t even in your peripheral when you’re revelling in its roadholding and embracing the cammy howl of its V6. The late LJK Setright once signed of an ode to the Fiat with three words – his being ‘thank you Dino’ – and I shall do the same.

Brakes Ventilated discs all round, servo-assisted

‘My first Fiat Dino was a 2.4-litre Coupé that I bought in 1988 in from a chap called Alfonso in Naples,’ says owner Nigel Knight. ‘I wanted a Ferrari 330GTC but couldn’t afford it. Alfonso said it was ‘perfetto’, but it wasn’t. In fact it was simply lousy mechanically; I spent £30k on it and sold it for £5k in 2006. I’ve owned many Ferraris since, but I bought this Fiat Spider in 2007 and it has given me by far the most satisfaction. I’ve done very little to it apart from preventative maintenance.

‘The only thing that has gone wrong over the years is the voltage regulator soon after I bought it, and the clutch cable about three years ago. Otherwise it always starts and has been trouble free. I have fitted a higher-ratio fifth gear but it’s still a tad to low-geared for my liking so I’m in the throes of having a high-ratio crown wheel and pinion made up for the differential in order to drop the engine speed a little more.

‘I do all the basic stuff myself, like changing the oil, brake fluid etc. I’ve spent about £3000 on maintenance in 11 years. It makes me smile all the time. The noise is amazing. The Ferrari Dino V6 is such an intoxicating sound; even if I am having a bad day, I go out, start the thing up, drive it and it makes me smile. It is just incredible.

‘People love it and think it is such a pretty car although most folk I encounter don’t know what it is. Those who do say that they wish they had bought one ten years ago.’

‘The Spider is enticing me with a smooth, high-pitched whine from its double overhead camshafts per bank’