The story so far BMW’s spanking new flagship big coupe, which we liked on the launch, then placed fourth (and last) in a Giant Test

For all its gesture control and xDrive all-wheel drive, BMW’s M850i is an archaic automotive proposition – a big, heavy, quite beautiful hunk of metal with space for two, seats for another two and a monstrous 4.4-litre V8. It’s about as progressive as a Sunday roast. It also costs £99,525 before options and will rip through a gallon of unleaded in under 20 miles without trying. So, it makes no sense. But finding Drive-My readers keen to drive it is easy nevertheless…

‘I normally drive pretty steadily but this just wants you to beast it!’ CHARLES BENNIE

Charles is besotted with his

Mercedes-AMG C43 C205 – in many ways a kind of mini-M850i – and perhaps prime for conversion to the 8-series fan club, of which I’m founding member and chairperson. But we don’t get off to a great start… 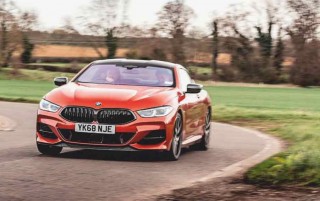 Straight off, Charles notes that visibility of the car’s extremities is poor – an issue exacerbated by the ultra-low driving position that works well once you’re up to speed. And, powering from one tight corner to another, Charles is also quick to point out just how heavy the BMW feels. He asks for numbers. I don’t sugar the pill, and tell him straight that this carbon-roofed sports coupe weighs 1965kg. ‘Hmmm, yes, that is a lot…’

But then the M850i starts to fight back, first with an effortless thump of acceleration to get up to speed on a slip-road. ‘Shit! It’s got a lot of poke – what a wonderful engine. A purring beast that’s ready to blast off whenever you need it to,’ gushes Charles as the 4.4-litre V8 does its thing. ‘Fabulous engine but very discreet too, unlike AMG’s V8s. This suits me better. But for all its manners it needs no encouragement whatsoever to get up to speed.’

As we power on, trading dual carriageway for sweeping rural roads, the BMW sets about really snaring Charles’s heart. Driving with the unhurried confidence of a man who enjoys his work, Charles and the M850i gel.

‘I really like the brakes – they’ve plenty of feel – but overwhelmingly it’s the car’s effortlessness I love. It’s so planted on the road, it goes exactly where you want it to go – thanks in part to the four-wheel steering – and there’s so much grip and composure; it laughs off mid-corner bumps. I normally drive pretty steadily but this just wants you to beast it!’

Come the end of his drive, Charles is smitten. ‘The more I drive it, the more I like it – a most extraordinary machine. Yes it’s heavy but it’s incredibly solid and beautifully made, and I love the engine. I’ll have to make a bit more money so I can get one of these.’

After a short stretch of A1 motorway, on which 6ft 4in Nick finds himself enamoured of both the BMW’s fine driving position and agreeably spacious cockpit, we get stuck into a great sequence of corners. The M850i rips through, the car’s adaptive dampers and impressive composure dispatching what should, at these speeds, be a challenging stretch of road. Nick’s enjoying himself, though he’s adamant he’d be enjoying himself more without four-wheel drive… 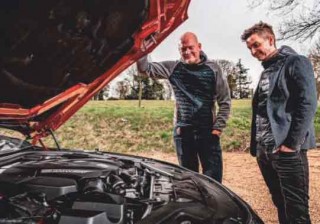 ‘Through faster corners you don’t really feel the all-wheel drive,’ says Nick. ‘But in tighter bends I prefer the more natural feel of my rear-drive 640d. This is a little Audi-like. Does it need all-wheel drive? I guess it helps in the snow, when my 6-series really struggles. ‘As for the four-wheel steering, you get used to it. Again, it’s in the tighter corners that you feel it: there’s a definite sense of the rear axle helping pivot the car.’

Nick bought his 640d Gran Coupe because it was both the perfect car for his requirements and ludicrously discounted. He needs a practical family car that’s also fun on his two-hour, mixed-road daily commute. ‘The 640d is a good compromise that doesn’t feel too compromised,’ he says. ‘The M850i just wouldn’t work on a practical level, but it’s also a lot of money; £100k is ridiculous for a BMW.’

Then the road opens up, clear of traffic, and the BMW surges from nothing to 90mph in moments. ‘It does sound lovely, doesn’t it?’ grins Nick, momentarily convinced perhaps. Then again, maybe not. ‘For me, the answer might be two cars: a family estate and a weekend car. Maybe a ’1969 Mustang, just to have, to look at and to drive around in pretending I’m John Wick.’

‘There you go! Now there’s a big silly smile all over my face!’

As if declaring his impartiality from the start, Andy is unapologetic in his fondness for BMWs. ‘I owned pretty much every model iteration of the E92 3-series, from the frustrating 330d through a couple of 335s – the best engine – to the ultimately disappointing M3,’ he tells me. But after an Audi RS5 and an X5, Andy made the jump to EVs with his Model S 85D – a new Performance Model S with Ludicrous Acceleration turns up shortly. Can the M850i impress?

‘Straight away it does feel heavy,’ says Andy. ‘The Tesla’s heavier, but to an extent the electric motors mask some of that. This kicks really hard too but it’s different – it feels different. You don’t get any build-up in a Tesla – just the hit of acceleration. This feels… old school. It’s back to raucous power. I always thought that what I loved about a fast car was the noise and the speed, but when you drive a Tesla you realise that the exhilaration comes from the speed alone – you don’t need the noise; it’s just theatre.’

Andy’s confidence in the car builds quickly as he re-adjusts to using actual brakes (rather than relying on regenerative charging to slow the car) and a car that goes through bends like, well, like a BMW. ‘For something this big and heavy it does feel impressively agile through corners, with tight body control and lots of grip,’ he says. ‘It’s refined, too; quiet, and a nice place to be, particularly when you compare the interior to a Tesla.’

Out of a junction, Andy gives the V8 some stick. He’s just been telling me how indulgent engines like this are, and then… ‘There you go! Now there’s a big silly smile on my face! But seriously, I think I’m over engines. The cost of ownership is huge and a 4.4-litre V8 is just gratuitous. But if BMW accelerated its electrification and came out with this powered by a 100kWh battery, that would be a game-changer.’

V8s – they’re for making grown men deeply and inexplicably happy. Harder to upset than Gandhi, and at least as powerful.

Nick Cole owns a BMW 640d Gran Coupe and is patiently waiting for the four-door version of the 8-series, due this summer.

The BMW fan and Tesla owner

Former BMW fanboy turned Teslarati Andy loves the idea of a fast, refined and handsome conveyance but isn’t sure he doesn’t already own it – an 85D Model S.

Rapidly falling head over heels for the big BM, editor Ben might just be getting old but he’s really enjoying the M850i’s refined performance.

35,000-miles-a-year Charles Bennie is 30 years a Drive-My reader/user, a passionate enthusiast and the custodian currently of both an AMG C43 and a Mini Cooper S.