On paper, grey is not a particularly exciting colour. It can look good and BMW has produced some very nice shades over the years, but it’s not a stand-out colour, not a traditional show car colour and not the sort of colour you think of when your aim is getting the attention of every petrolhead within a two-mile radius. But one glance at StreetFighter LA’s outrageous E92 335i and you realise that this is a car which needs no help when it comes to getting attention as it’s an out-and-out build that pulls no punches. 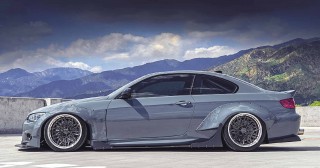 It’s the creation of Dylan Coleman, co-owner of tuning outfit StreetFighter LA. Regular readers may recall the last StreetFighter build we featured, back in the February 2018 issue, which managed to be even less subtle in tone than this one. It was a Midnight Purple E36 with a shouty Nissan RB26 motor and aggressively offset Rotiform SIX wheels under its brutal widearch kit. By comparison, the company’s latest offering is a little more subdued, aided in part by that respray in very greylooking Porsche Graphite Blue and rather more conventional stance, but it’s still an outrageously aggressive build. It’s crazywide, with vast wheels and vast arches; the sheer seam-busting levels of vastness are inescapable.

A little background then, for those unfamiliar with the StreetFighter LA brand. The key protagonists here are Lee Coleman – VP at Hollywood’s-own Viacom by day, caped crusader of awesome engineering by night – and his son Dylan, a dyed-in-the-wool gearhead with a keen understanding of what it takes to break necks, take names, and generate infinite likes and shares by the purist act of driving painfully cool cars. Between them, they’ve forged a fresh industry powerhouse where they engineer and manufacture performance parts and wide-body kits. And while ‘painfully cool cars’ is a broad church, and the brand caters for all sorts, Dylan’s proclivities have always lain with BMW. He’s just that kinda guy. “I’ve been interested in BMWs since before I could even drive,” he assures us. “I always felt they were great cars, and the amount of aftermarket parts is what really got me into modifying in the first place.” His first car was an E90, which acted as a springboard for his burgeoning skill set, slowly but surely receiving modifications to things like suspension, wheels, lights, aero and so on, all the while taking steps toward StreetFighter success in the process, until it was time to level-up to a mightier steed. The RB26 E36 may have been working its way through the shop with SEMA in its sights, but Dylan needed something cool for himself too, and this 2011 E92 335i was the answer. 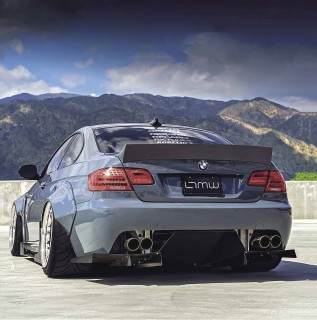 “Coming from an automatic pre-LCI E90 328i, the next logical step was to move to an LCI M Sport 335i,” he reasons, and there really is no arguing with that impeccable logic. “As I got more into the car scene and started to create relationships in the industry, I wanted to build on a platform I was familiar with and use the new background knowledge I learned from my last car.” The 335i was a bit of a find too, sitting as a trade-in at an Acura dealer – the first owners had bought it new for their son to take to college, but he didn’t end up taking it (brats, eh?) and it was only showing 4000 miles on the clock when Dylan had the opportunity to pounce on it. “I knew I wanted to mod it just as I did with my E90 – but this time it was planned out much better with even better parts,” he continues. “It was still my daily driver though, so nothing too over the top…”

Well, yes, but the concept of ‘over the top’ is entirely subjective, is it not? Case in point – a wide-body E92 that looks as outrageous as this might well be over the top for most people but, for Dylan, it’s exactly what he was after. However, before he got stuck into the styling the first thing, naturally, was to throw a whole bunch of extra power into it. Opting to ease the project in with some quality bolt-ons, the first order of business was a custom 3” exhaust system with cat-less downpipe, followed by the 7” intercooler, charge pipe, and a Burger Motorsports JB4.

With the car going like stink and making all the right noises, Dylan decided to tick the suspension box, and since StreetFighter LA has had a lot of success with Air Lift Performance products, bagging the 335i was a given. “Air Lift were early supporters of my builds, and were generous enough to work with me on this build even at a young age,” he says. “Between having a stanced car pre-wide-body, and turning the build into a show car, Air Lift provided the perfect solution for my needs.” Rims and suspension upgrades go hand-in-hand of course, so he had to get just the right wheels to suit the project… although, as with so many of us, Dylan actually went through quite a few sets of wheels before arriving at what you see here. “Once I went wide-body, three-piece rims were a must,” he says. Yep, with a sense of inevitability, the E92 was set to be treated to StreetFighter’s full catalogue of booty-enhancing upgrades. Until this point, the aesthetics had been subtly limited to a new front lip and rear spoiler, but with the decision made to go widearch, suddenly all bets were off. 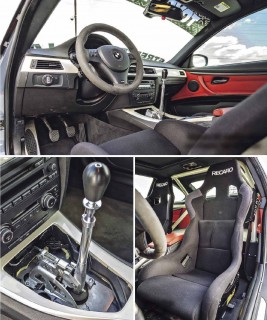 “Rotiform had just released their new QLB at the time, and I loved the intricate styling of them,” Dylan says. “I was unsure how they would turn out with the new styling, but absolutely fell in love with them once I finally got them on the car.” Meanwhile the body makeover comprises the proprietary wide-body kit, as well as StreetFighter’s side skirt extensions and canards, diffuser undertray, front lip and boot spoiler, and it’s exponentially ramped up the aggression of the profile.

Surfing the Zeitgeist of fattened footprints, the motorsport influence is unmissable, particularly with those aero aids hunkered right down to the tarmac. It looks like an F-14 Tomcat in flight even when it’s sitting still. “I originally designed the body kit to give the E92 – a chassis with less aggressive styling than previous models – an angry new look, while still maintaining the sleekness of the European car it is,” Dylan explains. “The wheels, suspension, and overall look came from inspiration I gained throughout my years of building cars and observing trends; this car has been with me for just over six years now, and it took around four years to get it to where I was happy with it.”

The makeover at this stage wasn’t just cosmetic either; with the exterior entering a whole new realm of desirability, the goings-on under the bonnet just had to be beefed up to suit. With the 335i freshly wide-bodied, Dylan added a Pure Turbos hybrid turbo, along with an RK Tunes custom ECU flash, diverter valve, and flex fuel wires.

The package was becoming ever-more cohesive, and the final piece of the jigsaw puzzle was the interior. As you’ve probably spotted from the photos, it’s pretty splendid in there too. “I already had one of my favourite interiors possible when I first purchased the car – Coral red Sport seats – but I decided to go with the Recaro SPGs for a more race car feel,” he grins. “The roll-cage was a must with the addition of the new seats, and it really contributes something to the overall look of the build. The CAE short-shifter is both extremely useful and stylistically in sync with the rest of the car too!” he says. 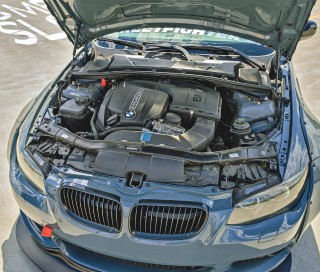 The velocity with which this car’s progressed is pretty startling; OK, on the face of it six years may seem pretty leisurely, but that’s not just six years of building this car – it’s six years of learning and earning the skills to design, develop, fabricate and install unique parts to customer cars to a premium level, which makes this more than just a project car, it’s a test bed. “The body kit is my favourite part of the car, for sure,” Dylan enthuses. “It was the first kit I ever produced, and incorporated every stylistic aspect that I’d taken a liking to!” And he’s not going to be resting on his laurels either; future plans for this 335i include replacing all of the aero parts with carbon fibre items, while at the same time growing the business, expanding the product range, oh, and by the time you read this you will have already seen what Dylan and Lee put together for SEMA 2018… StreetFighter LA is clearly a company that knows what it’s doing and this wild E92 is the perfect way to get that point across.

“With the 335i freshly wide-bodied, Dylan added a Pure Turbos hybrid turbo, along with an RK Tunes custom ECU flash, diverter valve, and flex fuel wires”

“I knew I wanted to mod it just as I did with my E90 – but this time it was planned out much better with even better parts. It was still my daily driver though, so nothing too over the top…” 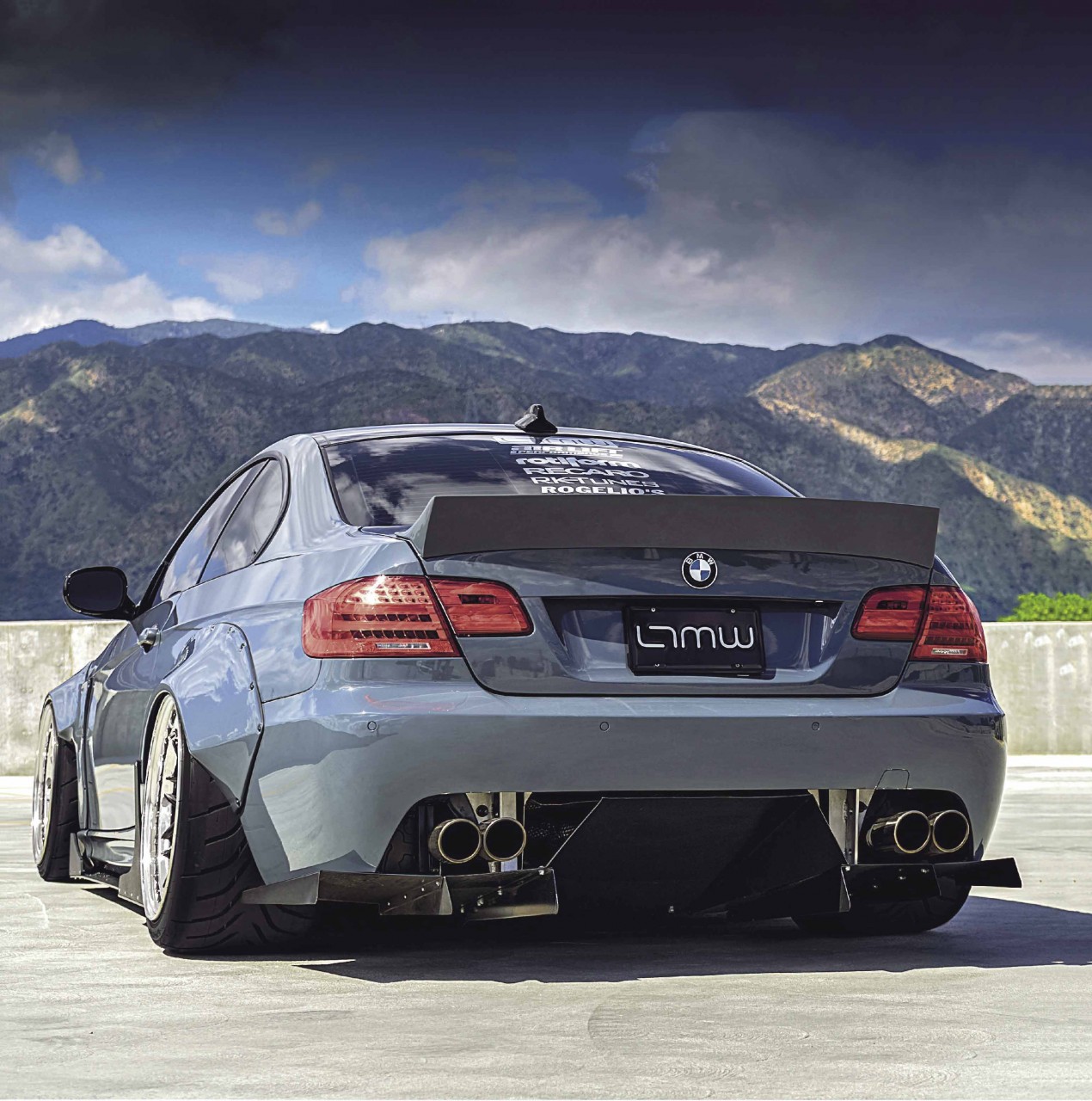 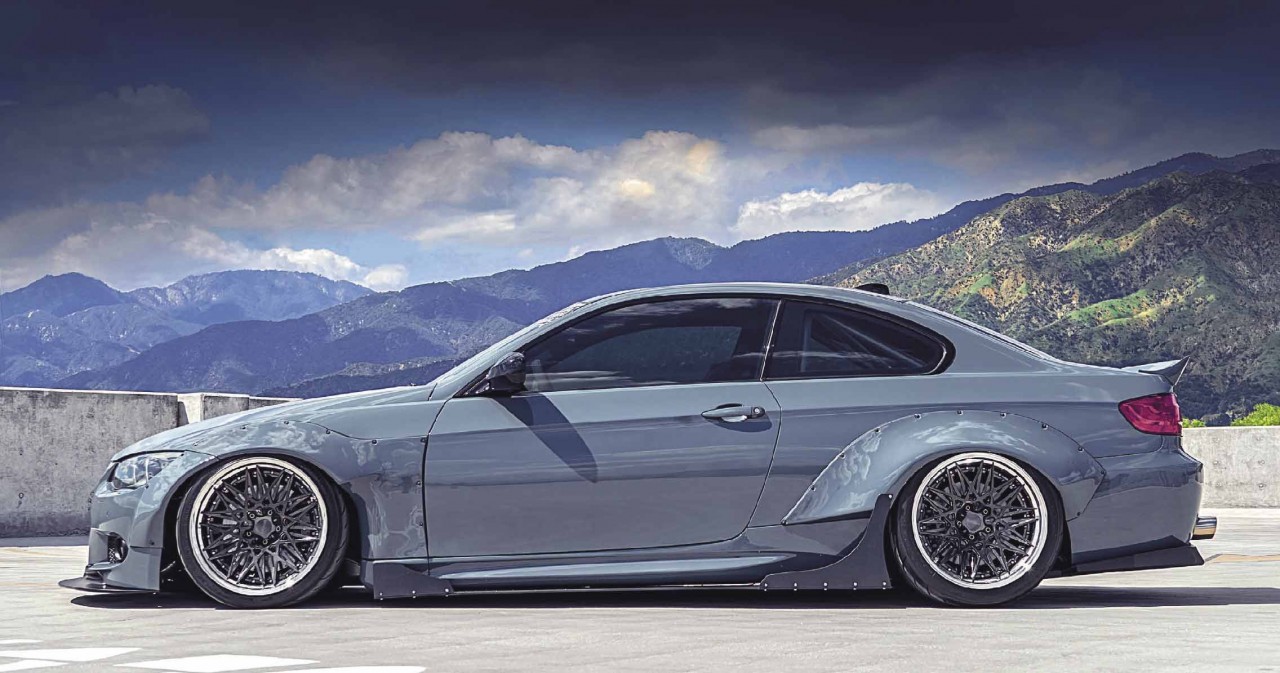 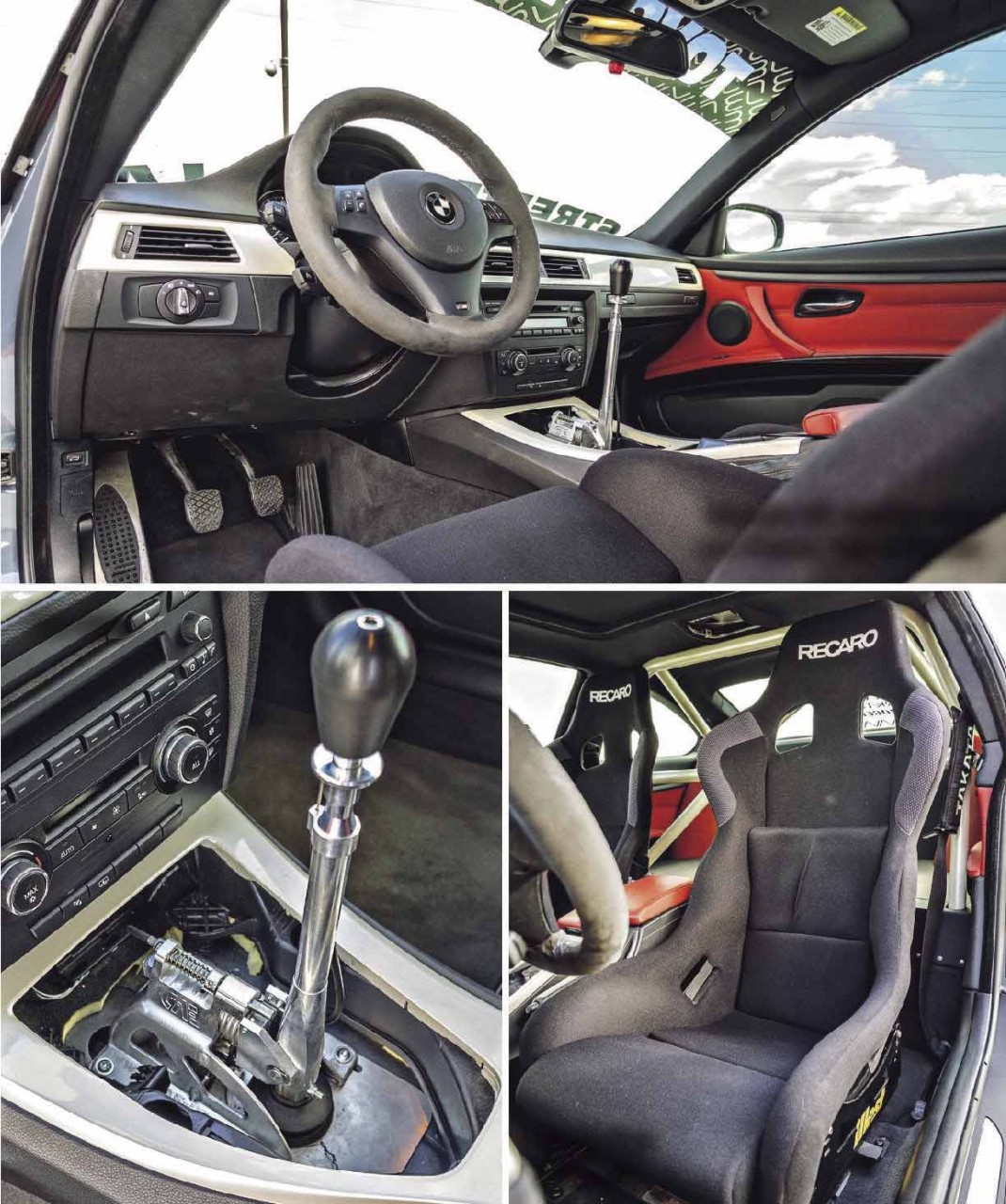 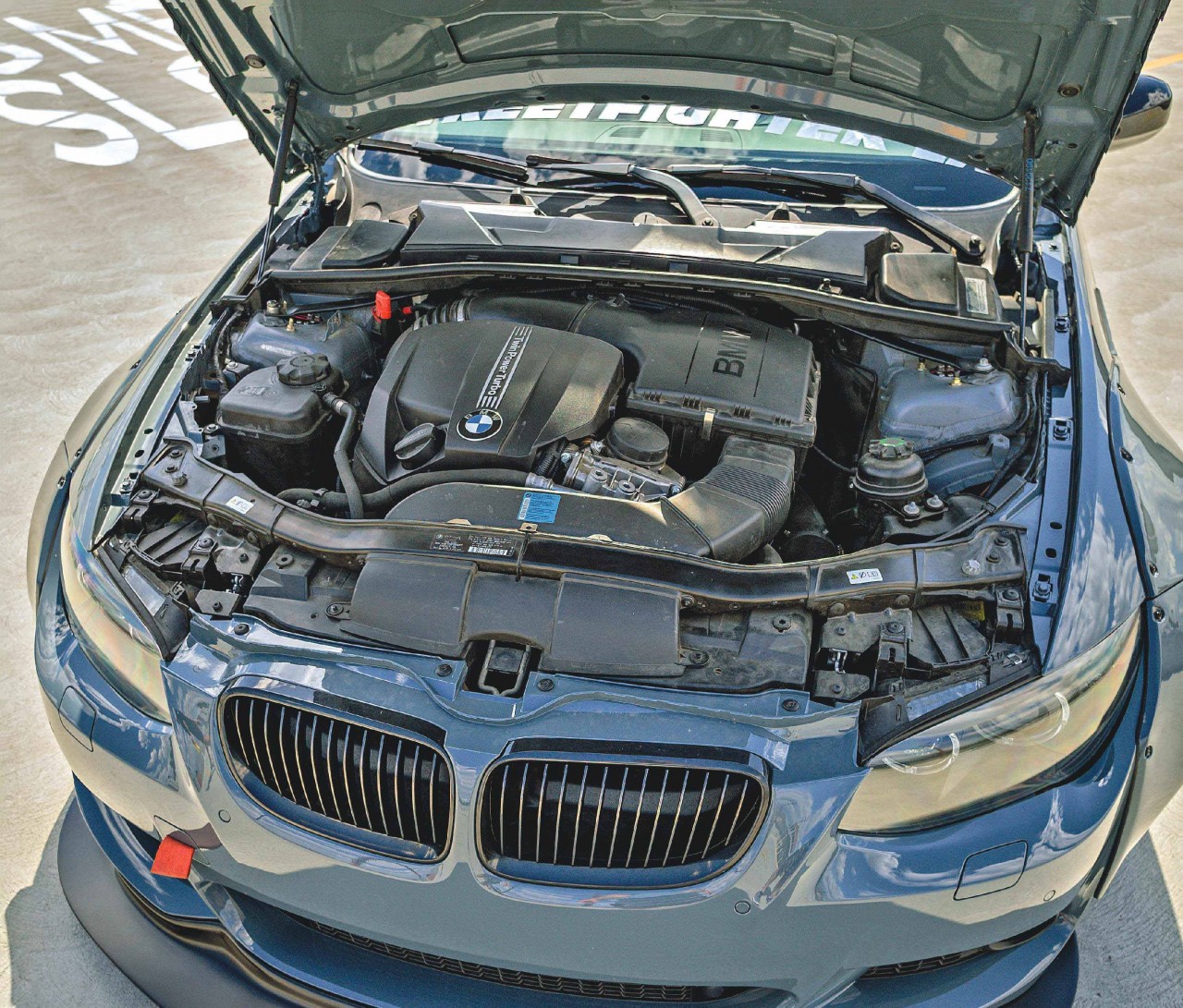 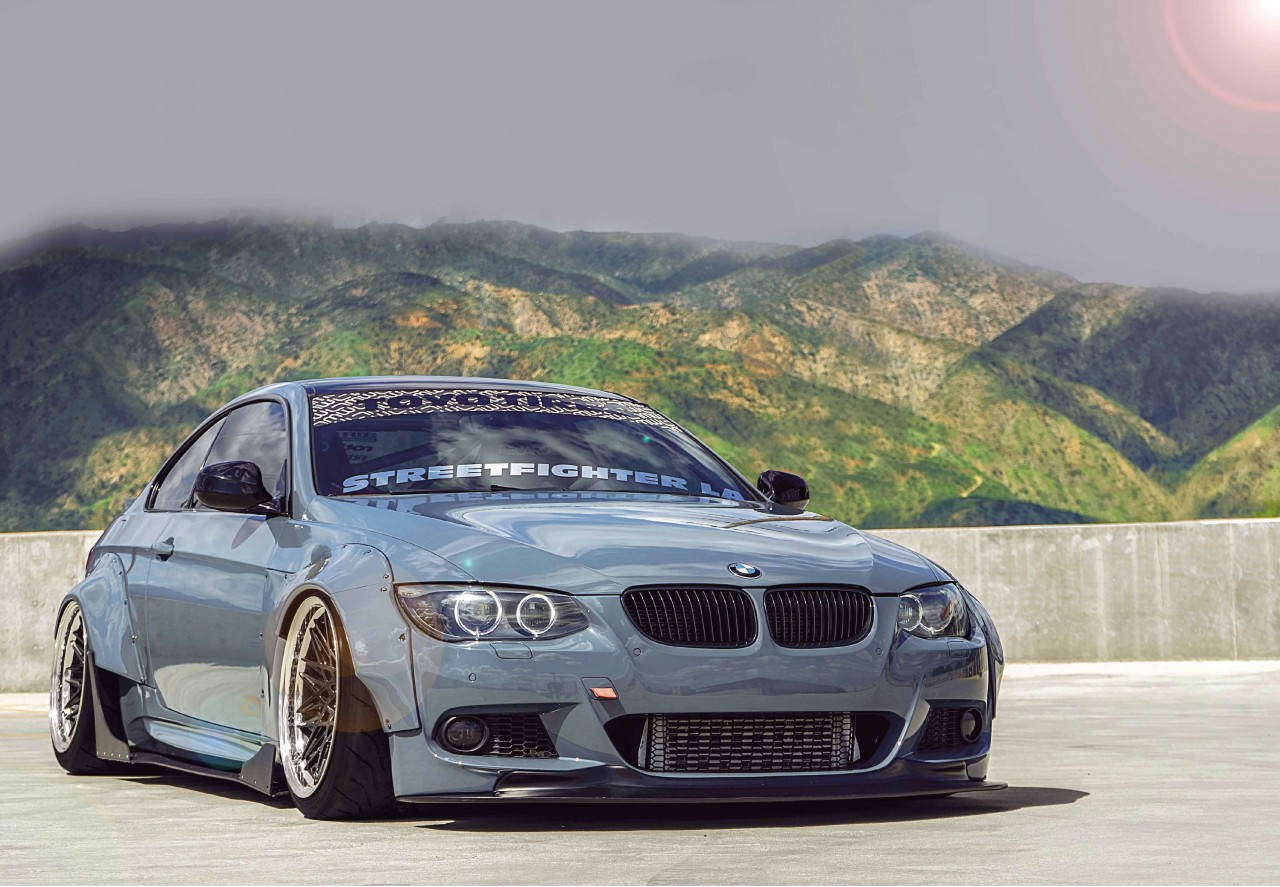 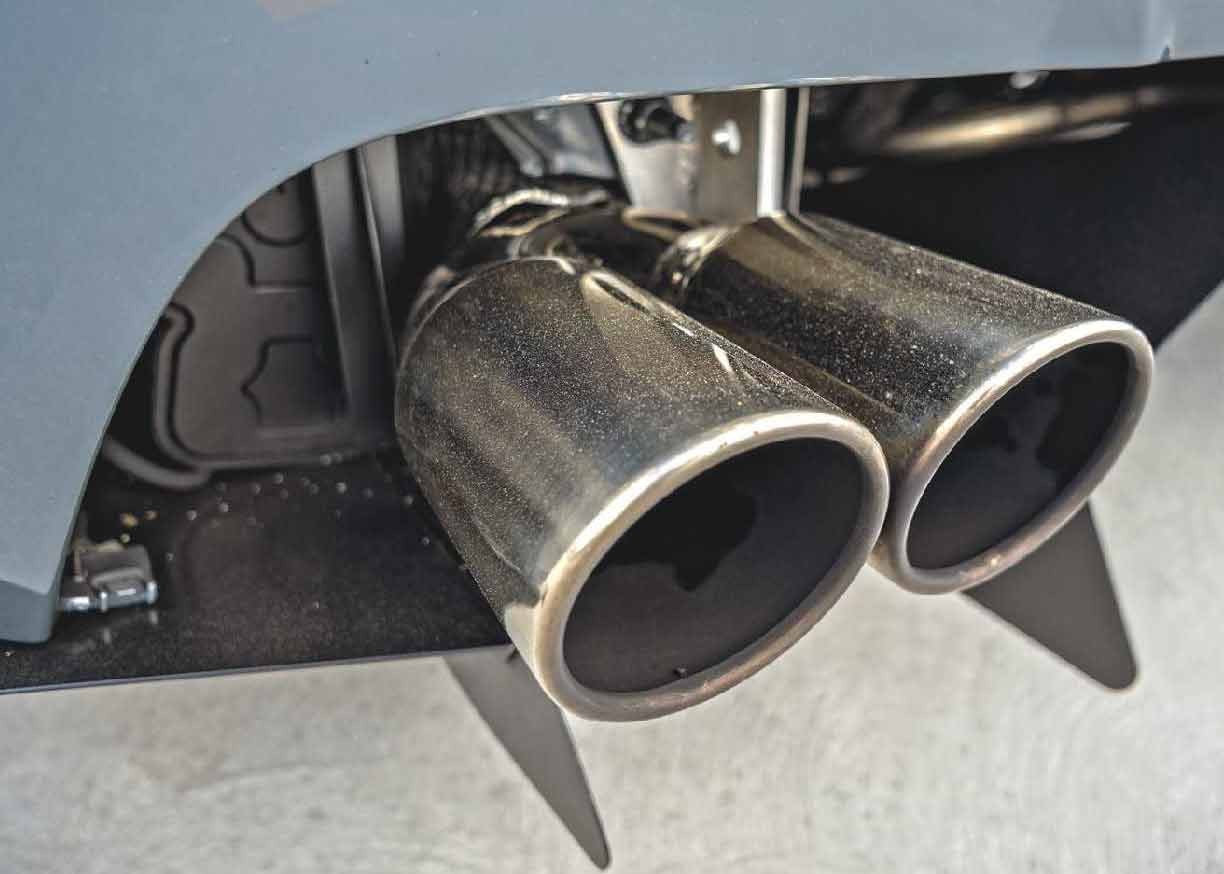