When it comes to luxury on a budget the undisputed BMW champion is the 7 Series and the E38 is arguably the pick of the bunch. In terms of value for money it really can’t be beaten, and as well as being a seriously well-put-together machine that feels like it will last for a lifetime and beyond it’s also seriously smart and has aged incredibly well. Sure, it can’t boast the same levels of tech that more modern machinery has to offer, but those long, simple lines give it a timeless sense of style and elegance and the decidedly unfussy design means it will remains a symbol of luxurious good taste long after BMW’s more recent Sevens have begun to look clunky and awkward. That it’s supremely comfy goes without saying but it’s equally good when experienced from behind the steering wheel and offers a level of involvement and driver satisfaction few other luxury cars of the day could match. It had plenty of engine options to choose from, too, and while you could have opted for a six or an eight, if you really wanted to (discreetly) announce to the world that you were top business dog, it was the V12-equipped 750i that was the one to want (we’ll take a short wheelbase Sport, please). The 5.4-litre powerplant developed 326hp and a hefty 361lb ft of torque, impressive outputs by anyone’s standards, but not by Brandon Miller’s because, you see, for him even the thought of the mighty M73 V12 wasn’t enough and so he set about building himself an E38 quite unlike any other. 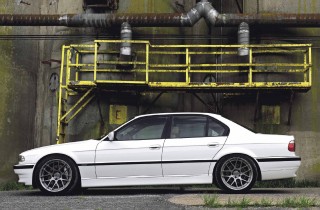 For Brandon, BMWs have been a big draw since his school days back in the ’90s, as he explains; “When I was in high school I got to drive a 525i and loved it.

Then in college, I saw my first E34 540i Sport in Alpine white, which was driven by one of the teachers, and would spend a few minutes every day admiring it. The first E34 I drove blew my mind. It was like nothing I had experienced before. I loved everything about it but, at the time, there was no way I could afford one,” he laments but that first taste of BMW goodness had proven irresistible and he had to have more. “My first BMW was a 1992 BMW E34 525i with M Tech body parts and ACS Type II wheels. It reminded me of that car I saw in college. I spent the next seven years modifying it with a fresh-built M52 with S52 cams and a Garrett GT3076R turbo, Wilwood brakes and countless other mods,” he grins and that immediately tells you that Brandon does not do things by halves. “During the E34 ownership I also built a period-correct street version of a 2.5 Trans Am-series Datsun 510. I sold that and the E34 and started building the LSx 427-swapped E39 Touring that was featured in the September 2015 issue of PBMW. During the E39 Touring ownership I also completely restored/refreshed a neglected ’2003 E39 M5 in Sterling grey with a Caramel interior. I sold both of those cars to start the E38,” he says and to sell an LSx-powered E39 for an E38 indicates that he was planning something very special indeed.

“The BMW S62 V8 was fully-rebuilt, albeit stock, by Peter Partee of The S62 Shop. The ESS supercharger runs a base ESS tune and a smaller 92mm pulley for higher boost”

“I had the plan for quite some time before I purchased the actual car. I had attempted to build something similar before with an ’01 740, custom-painted Estoril blue, but the timing wasn’t right and the car wasn’t as clean as I wanted for the base,” explains Brandon, without actually giving the plan away in any detail, but as he runs through the sequence of events that followed and the build process, it all begins to become clear. 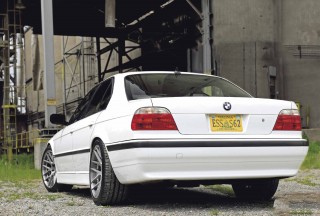 The project began with the interior, which would be the finishing touch for most people but Brandon decided to work inside out on his E38. “When I was searching for a car, I wanted Alpine white on black and wasn’t willing to bend on that. However, when I found this car, it was so perfect that I had to overlook the ugly sand/beige interior,” he says. “Having been obsessed with my caramel interior in the E39 M5, I had my friend Brian dye everything. We also added black carpet, black seat bases and black Alcantara headliner. It’s perfect in my opinion and the interior gets the most compliments out of anything on the car,” he smiles but that’s far from the whole story. “While that was being done, Paul Martin built me a custom M5 gauge cluster with the correct coded mileage and a white LED conversion. He also installed an M steering wheel and did the 2016 NBT iDrive retrofit with the high-res screen and iDrive controller and it’s fully integrated with the car,” says Brandon and it’s this which is undoubtedly the most impressive aspect of the interior. Where the E38 would normally have its old-school nav screen there now sits the vast 8.8” NBT display, beautifully framed in matching wood and the integration of this ultra-modern tech into an older car is extremely impressive. That custom-built M5 gauge cluster and the small matter of that manual gear lever sitting where you’d normally expect to find the auto gear selector are what really stands out, though, and they give you the biggest clue to what is going on under the bonnet…

“Paul Martin built me a custom BMW M5 E39 gauge cluster with the correct coded mileage and a white LED conversion. He also installed an M steering wheel and did the 2016 NBT iDrive retrofit”

Powering this E38 is an S62 taken from an E39 M5 but that wasn’t enough for Brandon and so he decided that the only logical step was to supercharge it for good measure… “The S62 V8 was fully-rebuilt, albeit stock, by Peter Partee of The S62 Shop. The ESS supercharger runs a base ESS tune and a smaller 92mm pulley for higher boost. The engine runs flawlessly, leaks no fluids and, with the stock E38 740 exhaust post-M5 cats, the car is near silent when running. The six-speed is paired with an OE-equivalent LUK clutch and the linkage has been swapped out for a UUC double shear selector rod, Evo shortshift kit and a ZHP weighted knob,” says Brandon, rounding off an incredible array of engine and transmission upgrades. The S62 alone already makes a heap more power than even the most potent E38 engine ever did, with 400hp out of the box, but the ESS supercharger ramps this up to a hefty 560hp and then you’ve got the smaller pulley on top of that so Brando E38 is putting out some monster power. To help put that power down, this E38 runs a custom-built four-clutch M5 LSD, which also means that this vast 7 Series will happily go sideways with zero effort, assuming Brandon can find enough room to do so. The fact that’s he’s kept the exhaust almost completely stock means that this is definitely something of a sleeper – sure, something like a BMW 7 Series is never truly going to be a sleeper in the absolute sense, but you’d never expect to come up against one with a supercharged BMW M5 V8. It must a be a surreal sensation driving a BMW 7 Series with a manual gearbox and, on top of that, so much power and this is the sort of build we live for.

With so much power now at his disposal, Brandon knew he needed to up his chassis game significantly and has treated his E38 to some seriously nice upgrades in this area. “The absolute best suspension setup for these cars is the Bilstein HD shocks with H&R II springs,” he explains and these have been paired with a set of UUC anti-roll bars to keep things flat through the corners. “I also recently added Turner Motorsports monoball front controls arms which really tightened up the steering. These are a highly regarded upgrade,” adds Brandon. Up front you’ll find a hefty Brembo GT BBK with four-pot calipers over 355mm slotted discs while at the rear there are 750i E38 brakes, not small by any means, and a modified 750iL E38 subframe in order to accommodate that diff.

We’re used to seeing Sevens on massive dished wheels with huge polished lips but obviously that aesthetic was not going to work with the discreet performance blend of this build and so Brandon tried out a few more performance-orientated designs.

“I tried several sets of wheels,” he says, “Apex ARC-8, Racing Dynamics RD2 and finally, my favourite, the BC Forged HB04 with hidden hardware in tinted clear over brushed. The wheels really set the car off in my opinion,” he says and we absolutely agree. They’re not showy in any way, with a discreet finish and even the style is quite subtle but it suits the Seven so well; 19s are the perfect size and the wheels look so good with the subtle drop from that suspension combo and they finish off what is really a fantastic-looking car.

Brandon has built himself an incredible BMW 7 Series, a true one-off machine and every aspect of it is just astonishing, from that NBT iDrive retrofit to the awesome engine swap topped off with that supercharger and we couldn’t pick a favourite mod on this car, so it’s almost unfair to ask Brandon to do the same. “This is really hard to decide,” he laughs. “It’s just such a perfect car all-round. I love the exterior styling, the interior, the power, the smoothness of it all and how comfortable it is in all types of driving conditions,” and it’s this incredible all-round ability that makes this such a downright awesome machine. He’s combined the old-school luxury of the E38 7 Series with a vast amount of power and, with that engine and transmission swap, this is basically the M7 that BMW never built. And only the latest twin-turbo V12 2016 BMW 760Li G12 can outdo Brandon’s build in terms of sheer horsepower, which makes his home-brew hero, built in just four months, all the more impressive. “Money was no object on this one and I don’t think I would change a thing!” he exclaims and we don’t blame him because this really was his perfect build. “This one is done and will just be maintained. It stays in a climate controlled garage and never gets driven below 0°C or in any type of inclement weather. I even try not to wash it often since the paint is so immaculate. I had about 30% of the car clear wrapped in XPEL film to further protect it,” and it’s clear that this amazing 7 Series is going to be a cherished member of Brandon’s car family for a very long time. Has Brandon built the ultimate 7 Series? We reckon it’s safe to say he has. 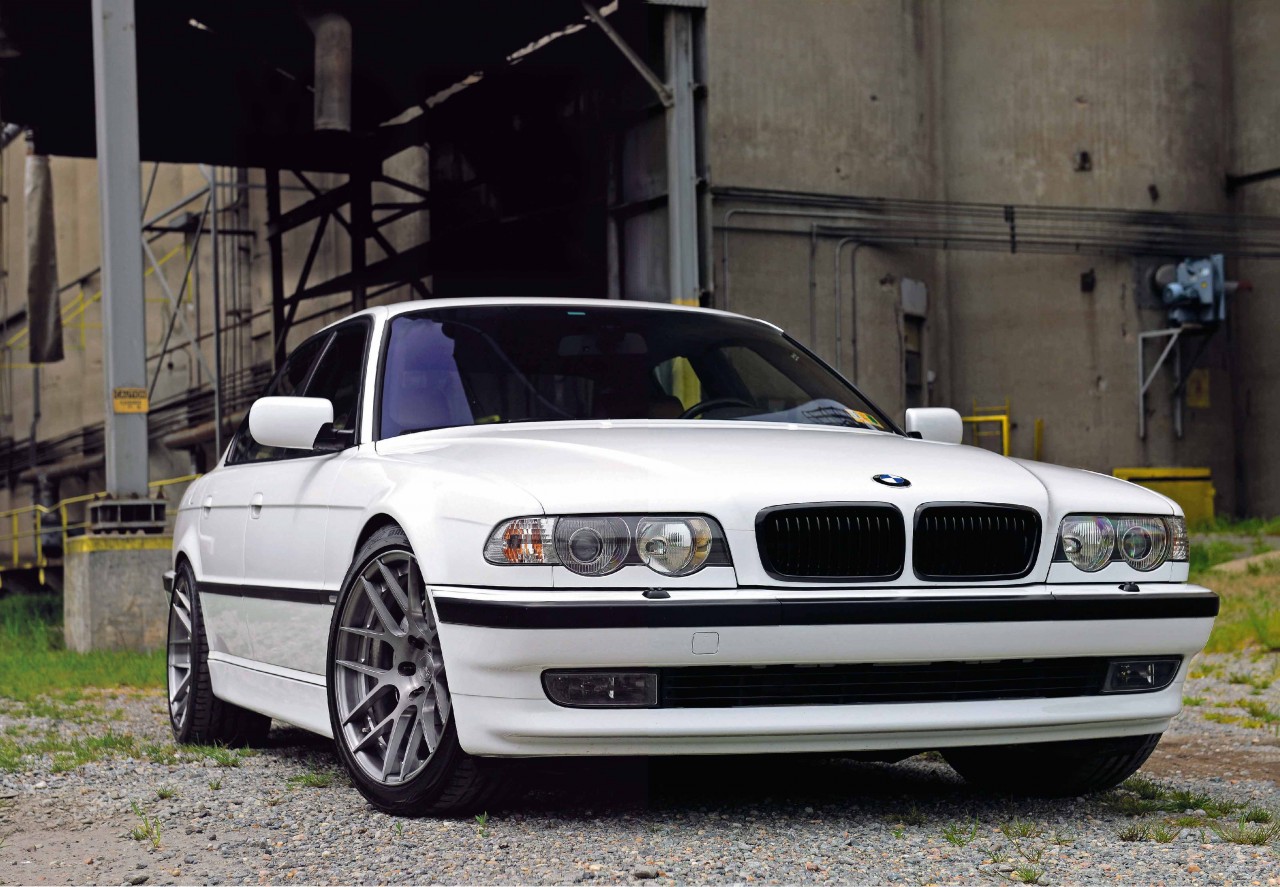 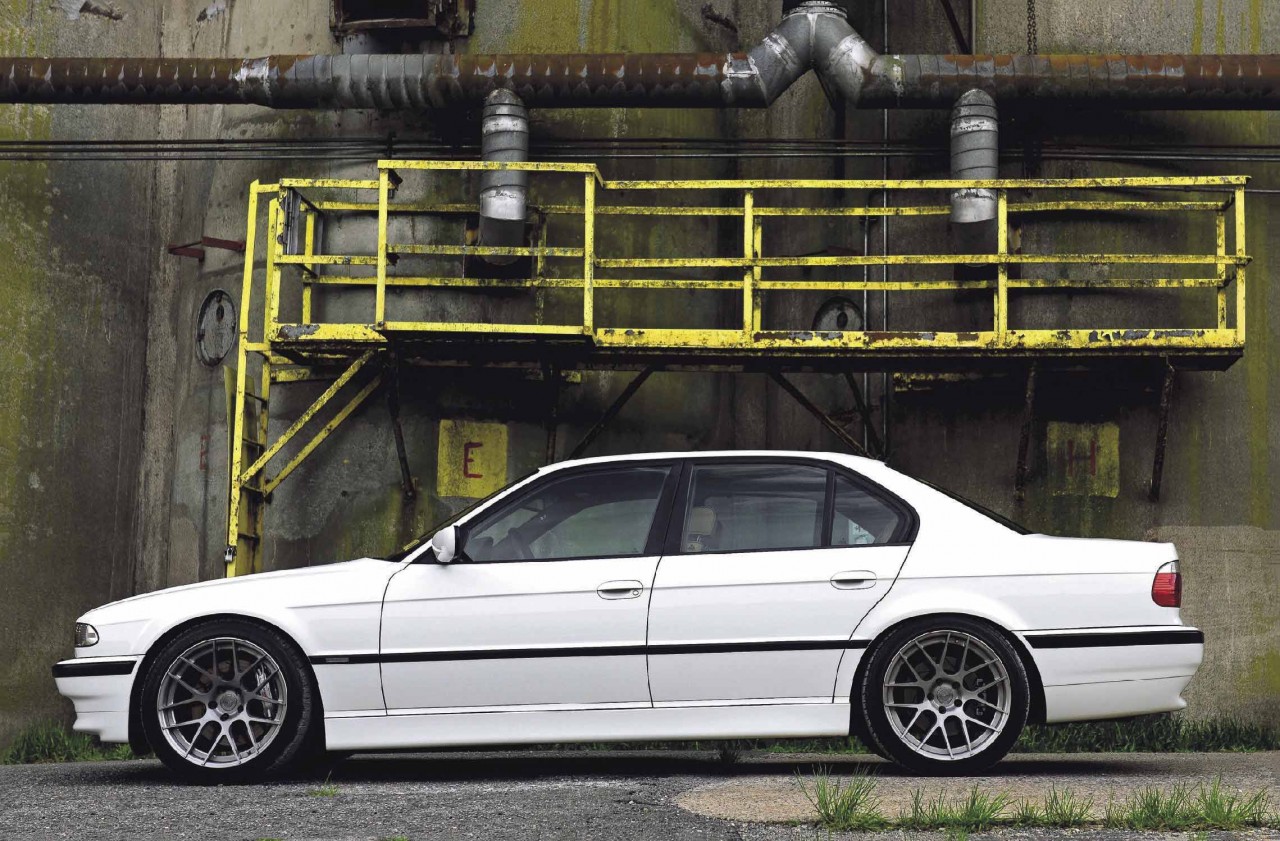 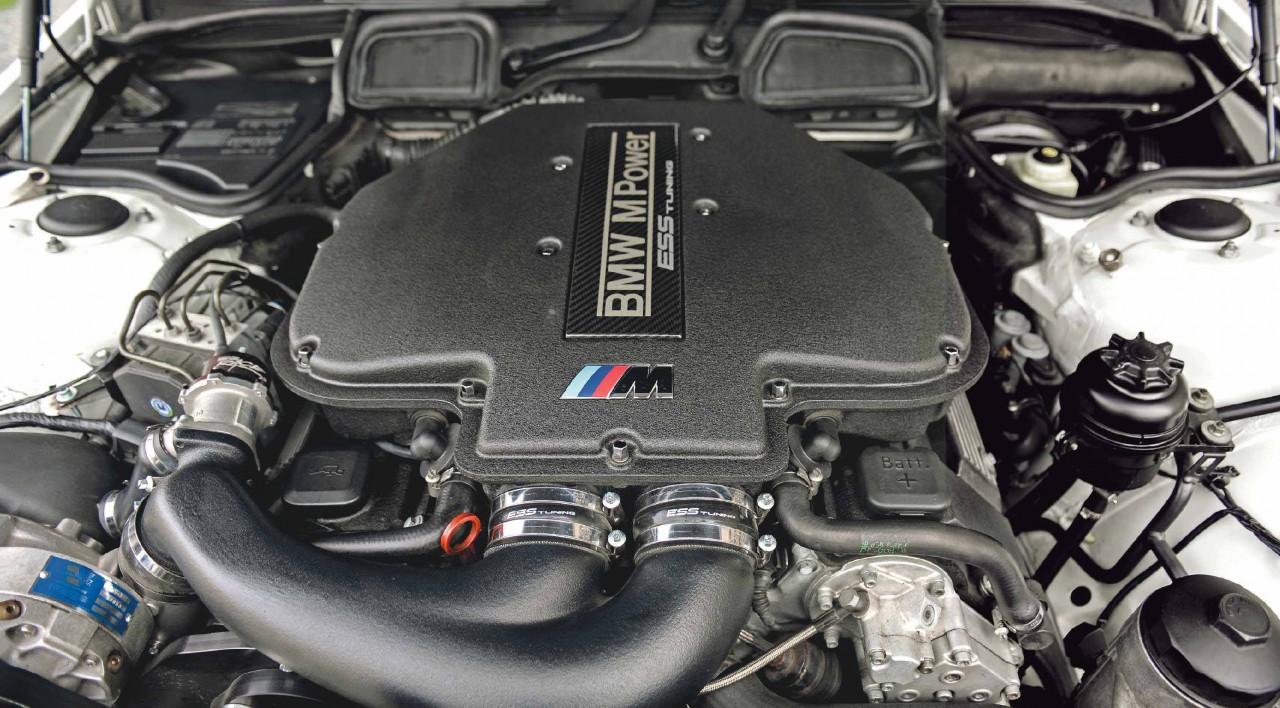 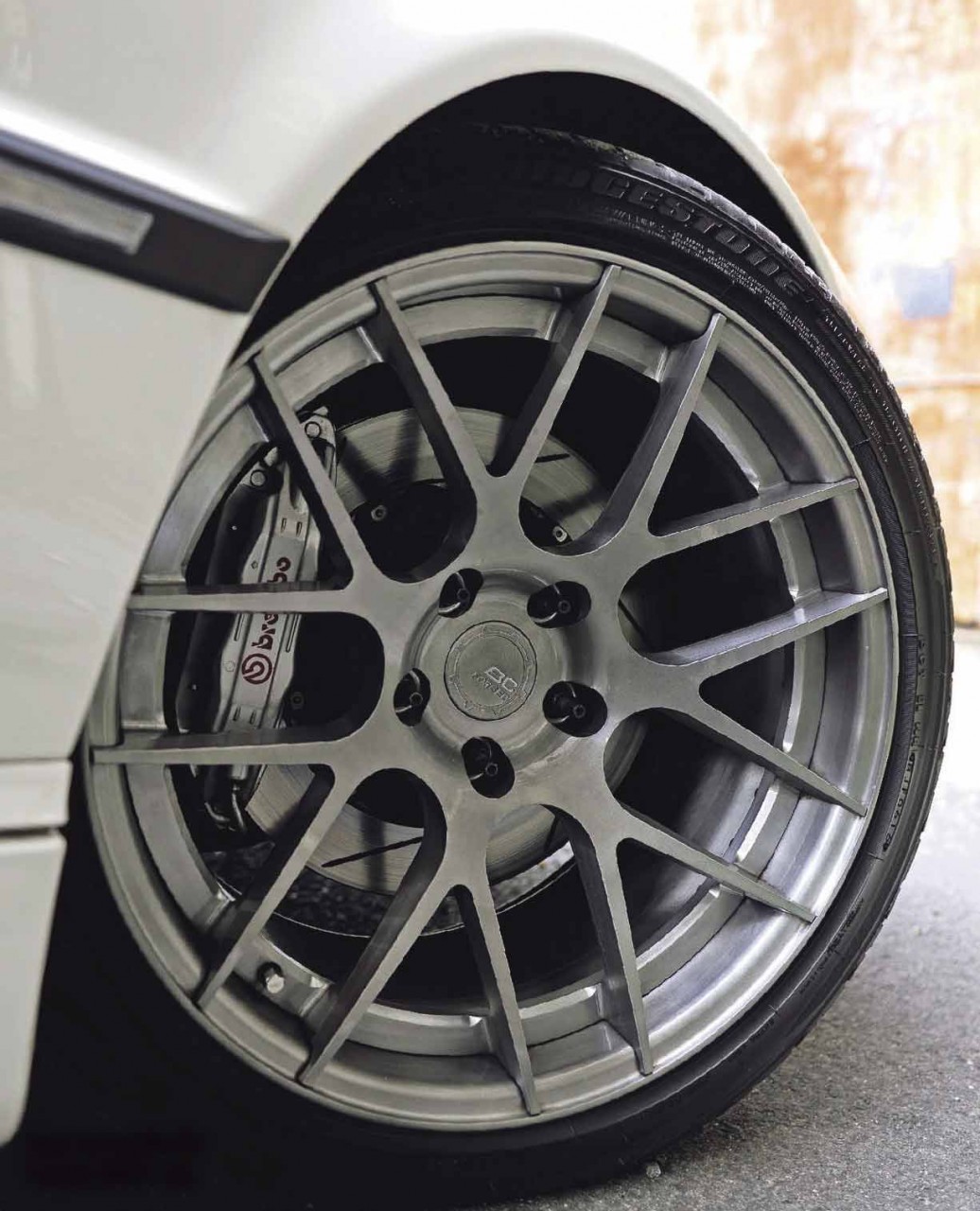 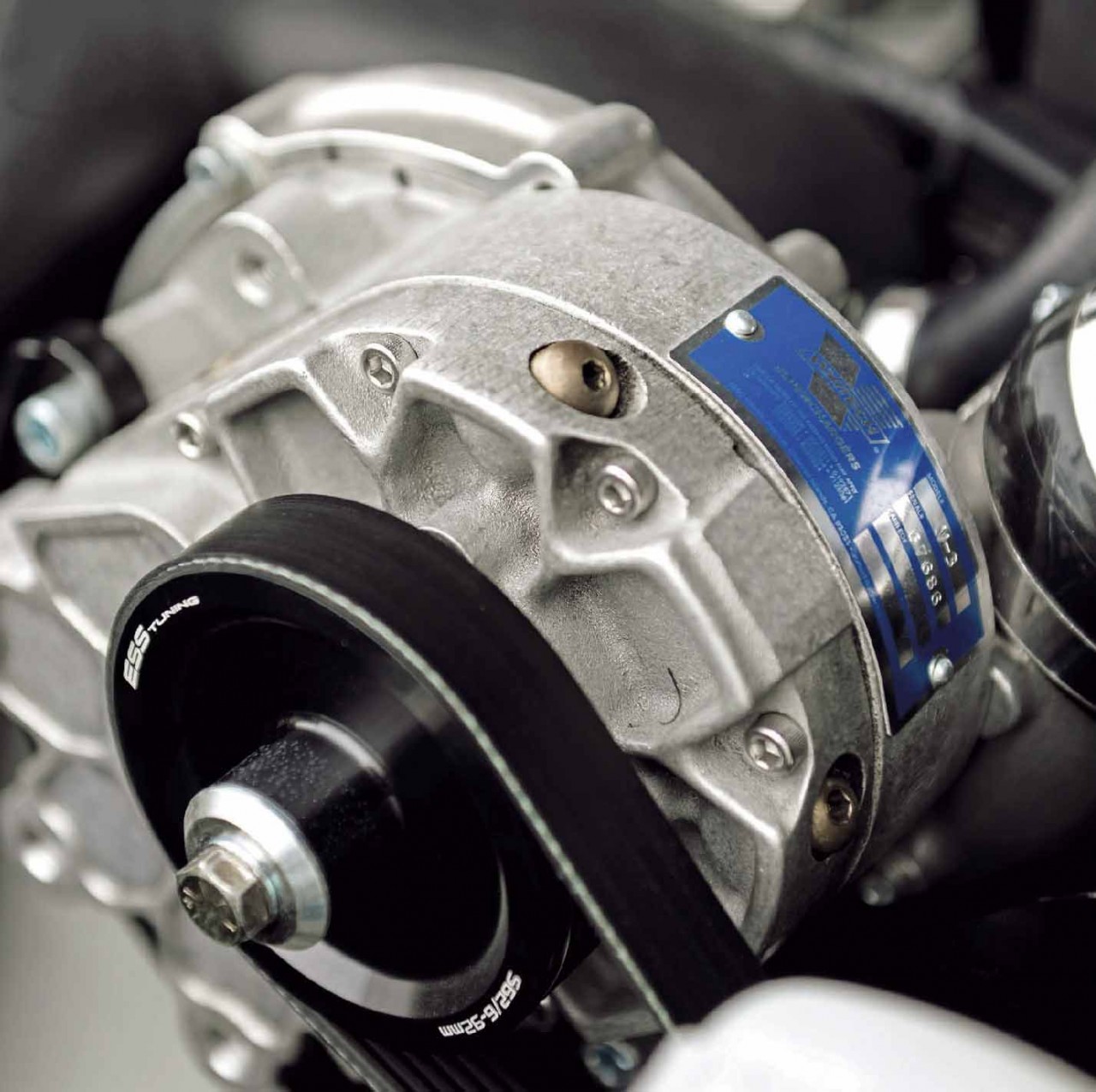 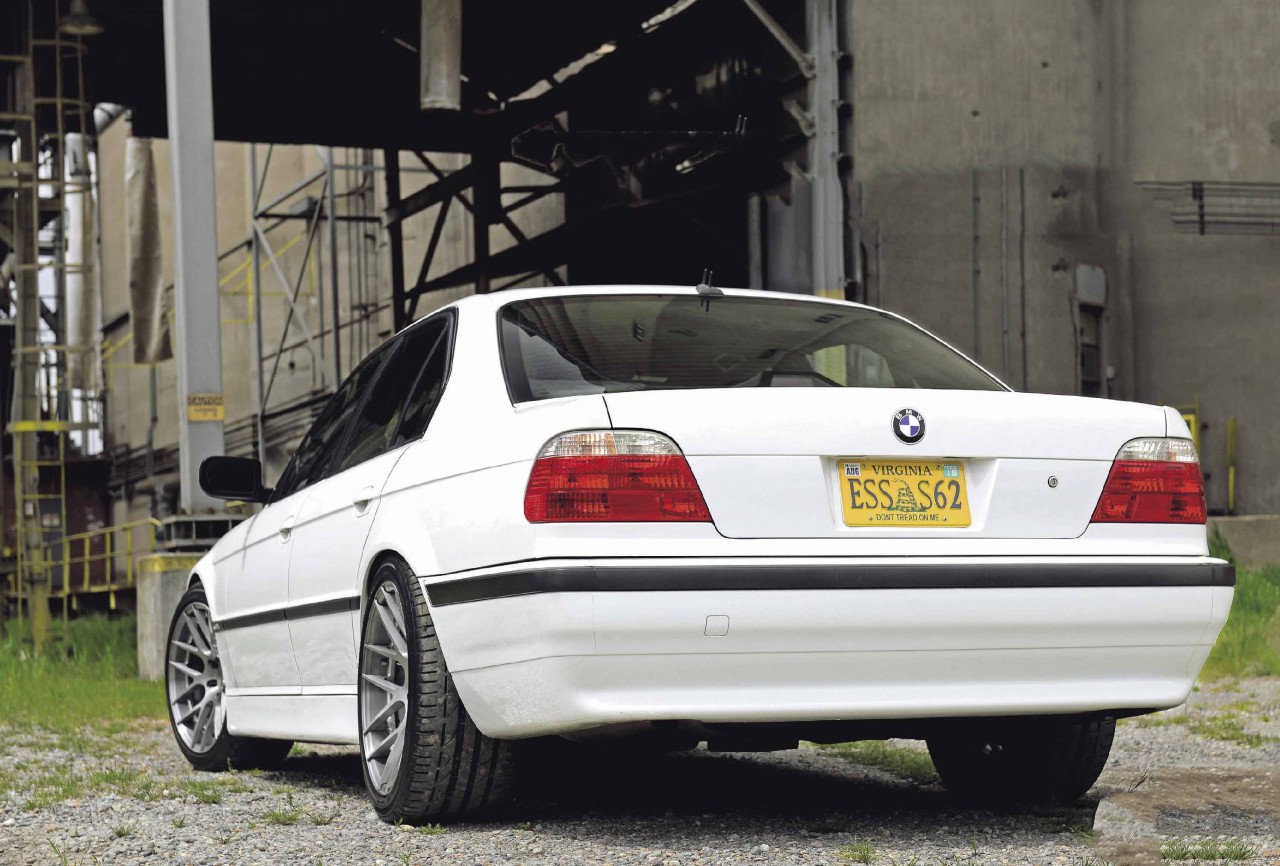 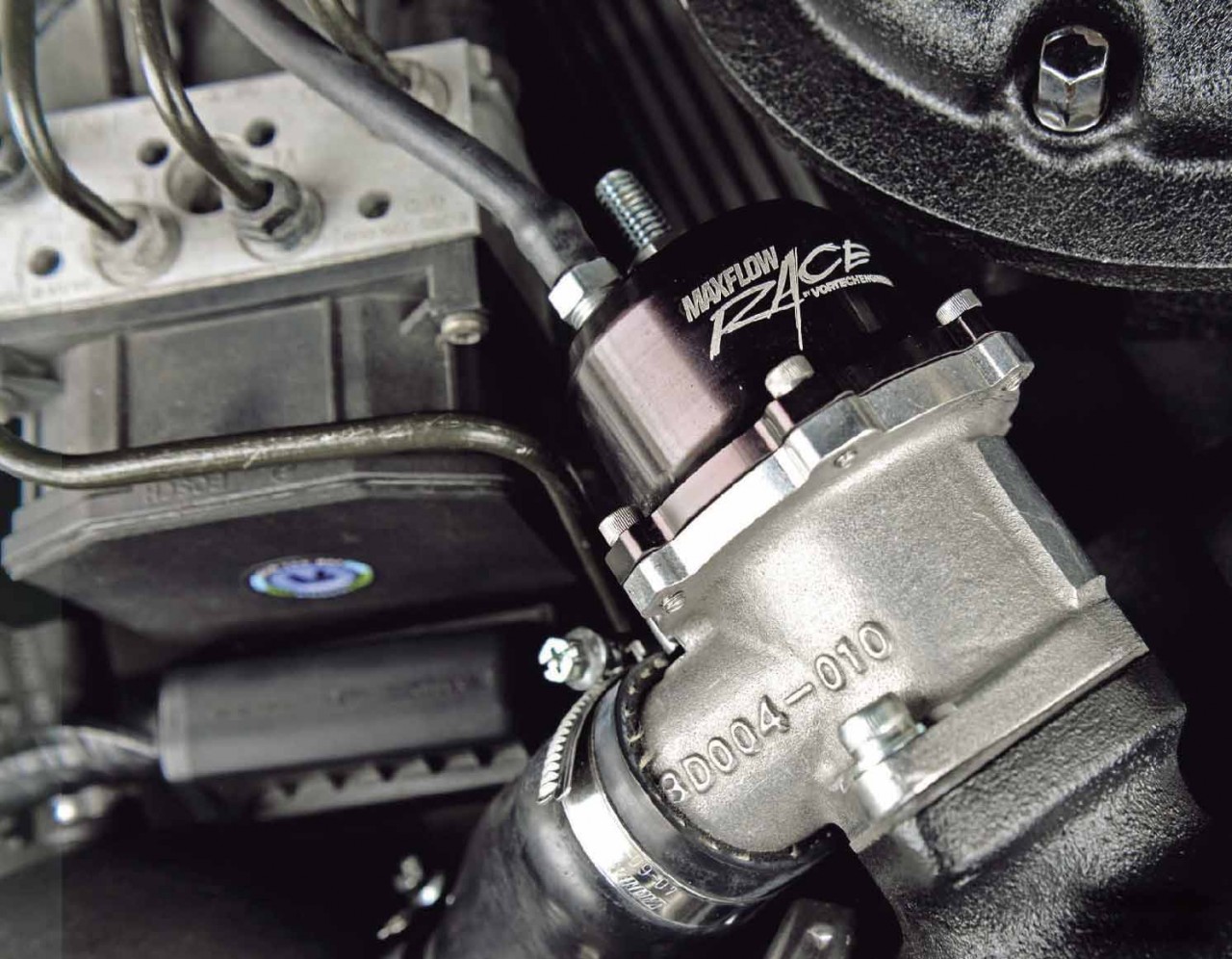