So, this is pretty wild. It’s not going to be for everyone, let’s be honest, but we like it – if we didn’t, it wouldn’t be here – and while we love the subtle, understated builds we often feature, we have all the time in the world for mental stuff like this E30. It’s what makes the modding world go round – every now and again you need something like this to just wake you up, smack you in the face and make you sit up and take notice, and it definitely does that and a whole lot more.

What’s even more impressive than the sheer scale and audacity of this build is the fact that its owner, Brandon Sybico, is only 20 and this is his first car. Good effort. Regular readers might be racking their brains, wondering why that surname sounds familiar and that’s because Brandon’s dad, Joe, built a no-less-wild-looking, wide-body E60 M5 that we featured back in our June 2017 issue. With a dad like that driving a car like that it was pretty much inevitable that Brandon would go down the same route as his dad – like father, like son after all. And with a dad like Joe it’s no surprise that Brandon’s first love is BMWs, how could it be anything else? “I’ve been into BMWs since I was 10, when my dad bought his first M car, which was a 2006 E46 M3 and ever since then I’ve loved BMWs. I got my E30 my freshman year of high school in 2012 – I had no choice, dad got it for me and I’ve been modding it since then,” he laughs and we would definitely not have minded if someone had bought us an E30 when we were 20… “I got the car from a shop that some guy was selling. I got the car in pretty good condition – the guy I bought it from put $6k-worth of maintenance into it before I bought it; it still needed a little TLC but wasn’t a rust bucket at all,” says Brandon. “When my dad got it for me I just looked at it as my car that will get me from point a to point b. I had no crazy plans for it till I started working,” he says, sensibly, but, as you can see, things got pretty crazy once Brandon was earning money and had some of that sweet disposable income to hand and an E30 to dispose it on. 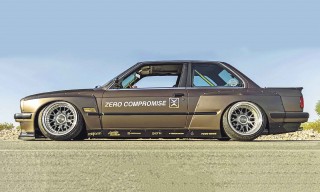 Things started off relatively slowly and sensibly at least, as they usually do; “The first mod I did to the car was to buy wheels, a set of Sprint Hart CPRs,” says Brandon. “Then I got just some cheap old springs to give it some lows. Then after that I did the manual swap in my garage, just my dad and myself, some jack stands and a lot of labour got it done,” he grins. “Then I got lucky and stumbled across a set of HRE 505s from an old man and refurbished them, got the lips polished and repainted the faces,” and while those mods have long gone, this brings us neatly onto where things started taking shape, as the next thing on Brandon’s shopping list was the colour. “Ever since my dad did brown and gold, me being his son I wanted to match the theme and the two colours just match so perfectly,” says Brandon of his 3M matt metallic brown wrap. Last month we were discussing our surprise at the fact that grey is seriously sexy right now and here we are about to get excited about brown because Brandon’s colour choice is an awesome one and it works so incredibly well with the whole look of the car. The shade is lush, with hints of toffee, coffee and cocoa all rolled into one and the metallic aspect really adds an extra dimension to proceedings; matt metallic brown might not sound especially appealing on paper, but in real life it’s a completely different story. Of course, the colour is a very small part of what makes this car just so damn eye-catching and almost all credit for those head-turning looks must go to the wide-body kit this E30 wears.

“We wanted to keep the car period-correct and we wanted to wide-body it and match the lines but not look like we are trying to make it look like an E30 M3,” explains Brandon. There’s no danger of that happening as the Rocket Bunny Pandem kit that has been installed pumps up this E30’s arches to an outrageous level, giving it the sort of broad-shouldered look that is guaranteed to get you noticed.

As we said before, we are fully aware of the fact that, for many of you out there, a wide-body E30 is not the sort of car that you’d want to be seen in but, cast your mind back to when you were 20 – assuming you’ve got a few years on top of that – or don’t cast your mind anywhere if you’re that sort of age now, and think how absolutely awesome it would be to own a car like this at that point in your life. For most of us it would be completely unattainable, absolutely outrageous while at the same time being just about the greatest thing imaginable, so you can get an idea for how it must feel for Brandon to step out of his house every day and see this wide-body E30, his wide-body E30, and know that this is his to drive whenever he wants. Regardless of how you may feel about this car, you have to be able to appreciate it to some degree. The arches make a massive impact on their own but they are not alone here and Brandon has added a selection of external mods to give this E30 even more of an individual look. There are tiny carbon motorsport mirrors, a Kamei spoiler from Australia, ’80s wind splitters, a rare Euro rear plate filler, Euro grilles and Euro headlights wrapped in New Era film and everything comes together to really make this one unique E30.

While some builds focus all their attention on the exterior and leave the interior fairly stock-looking that is most definitely not the case with Brandon’s build and the cabin of this E30 does not disappoint. “I got my interior done at Euro Garage; they wrapped a pair of E30 sport seats in grey leather and Recaro material and they also custom-fitted a pair of E24 bucket seats in the back and added diamond-stitched door panels and a suede roof lining,” he says and the result is understated but still spectacular. It’s nowhere near as wild as the exterior, but it’s very different to the stock interior and definitely looks special; the seats look awesome and we love the repeated Recaro text design, the door panels and the sexy suede head lining plus the Nardi steering wheel and gear knob while in the back, wrapped around the 6 Series rear seats, is a roll-cage installed at home by Brandon and his dad. A few months after getting his interior done, Brandon handed his E30 over to Boden Autohaus and they fitted the AccuAir air-ride suspension, the controller for which you can spy on the centre console, and also carried out the rather sexy boot build you see before you. The setup uses twin tanks and hard pipes along with two 12” Kicker subs, all custom-mounted in a quilted suede panel to match the interior. 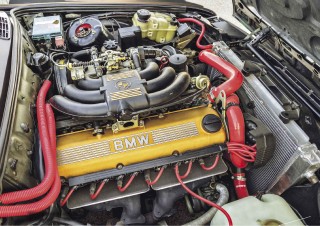 Now that’s a mighty-fine line-up of mods and you might think we’re done but there’s a little bit more left to talk about because there’s something beneath the surface that you can’t see but which has allowed Brandon to go mental with his choice of wheels. “I got my car tubbed and body-dropped over at Sadistic Iron Werks,” grins Brandon and those two mods really up the ante. Getting the E30 body-dropped means that he could get it absolutely on the ground for incredible dramatic effect, while tubbing the arches meant the world was now his oyster when it came to wheel choice as he was no longer restricted by the E30’s relatively meagre wheel wells, and he put that new-found space to very good use. “I have a custom set of Rotiforms and my dad actually chose the design; we wanted something aggressive and wide and Rotiform was able to supply that,” he says. The wheels in question are a set of 17” RSEs which measure a hefty 9.5” across up front and a monster 11” at the rear, which were needed to fill out those fat arches and which could be fitted with ease thanks to the tubbed arches.

The RSEs feature a classic cross-spoke style with a twist and the grey centres with polished lips and gold hardware look perfect on this BMW E30.

In terms of building a car that will appeal to all BMW fans, Brandon’s E30 is most definitely not that, but as far as building an absolute show-stopper of a machine goes, it’s mission accomplished and then some. Brandon couldn’t be happier with the spectacular E30 he’s put together, but it’s far from finished; “I’ve had my car for six years and every year we added something different,” he says. “If money were no object I would do some kind of crazy engine swap. Do a 2JZ, or blow everyone’s mind and do some kind of exotic motor like a Lambo or Ferrari,” he laughs, “but an engine swap is definitely next on the agenda, maybe a colour switch too, who knows,” he grins and it’s clear that as his tastes and style evolve over the coming years so too will his E30 (assuming it sticks around when he picks himself up the M3 he’s currently hunting for). It will grow and develop with him and become something even more spectacular along the way, as well as carrying the history of Brandon’s development as a BMW enthusiast with it, which it makes a very special machine.

“I got my interior done at Euro Garage; they wrapped a pair of E30 sport seats in grey leather and Recaro material and they also custom-fitted a pair of E24 bucket seats in the back”

THANKS Special thanks to Sadistic Iron Werks for always getting the job done right. Also thanks to Toyo Tires for being an awesome sponsor. I also want to thank my parents for their support 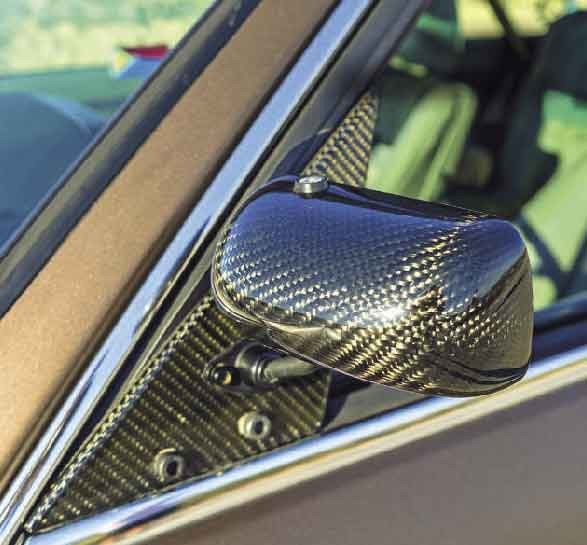 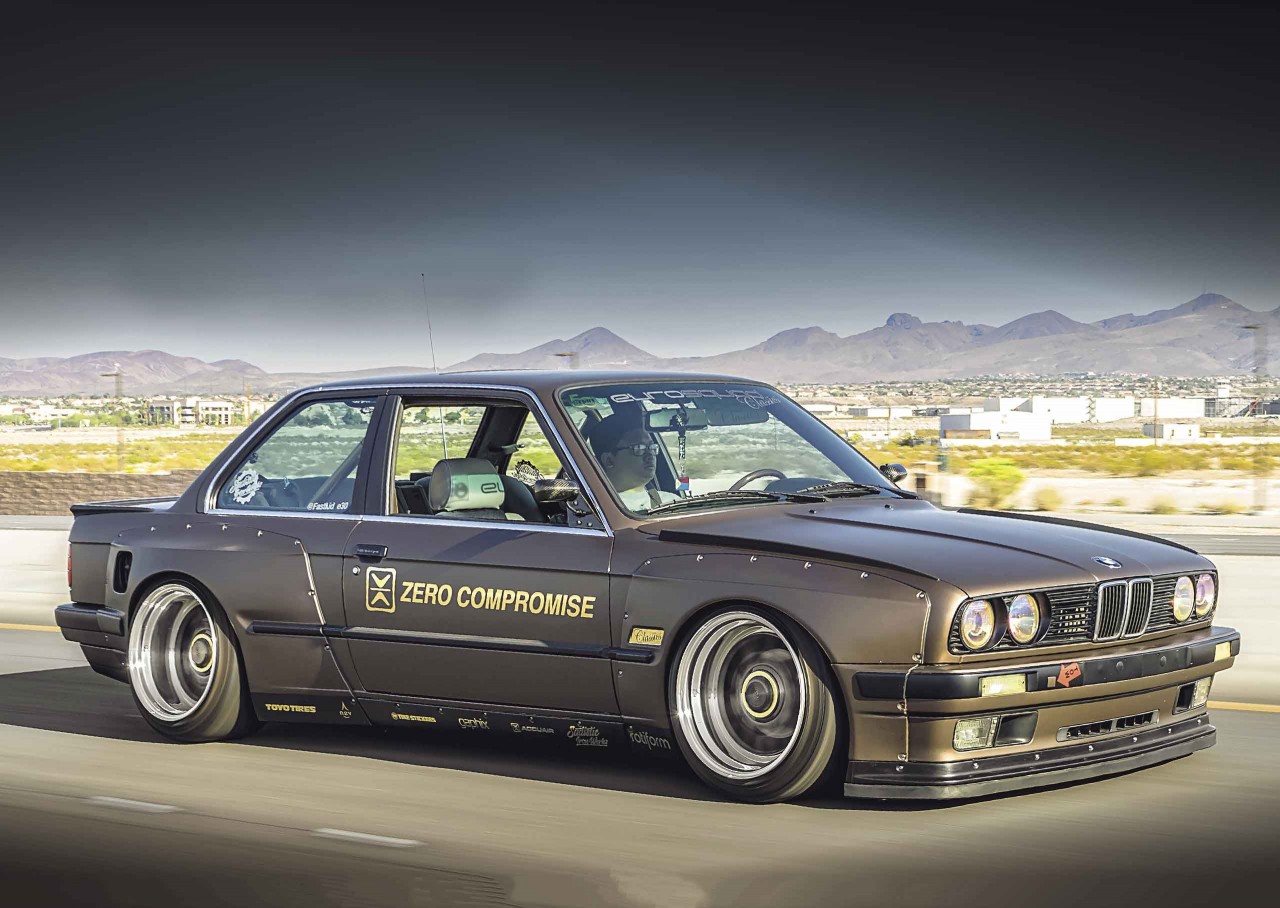 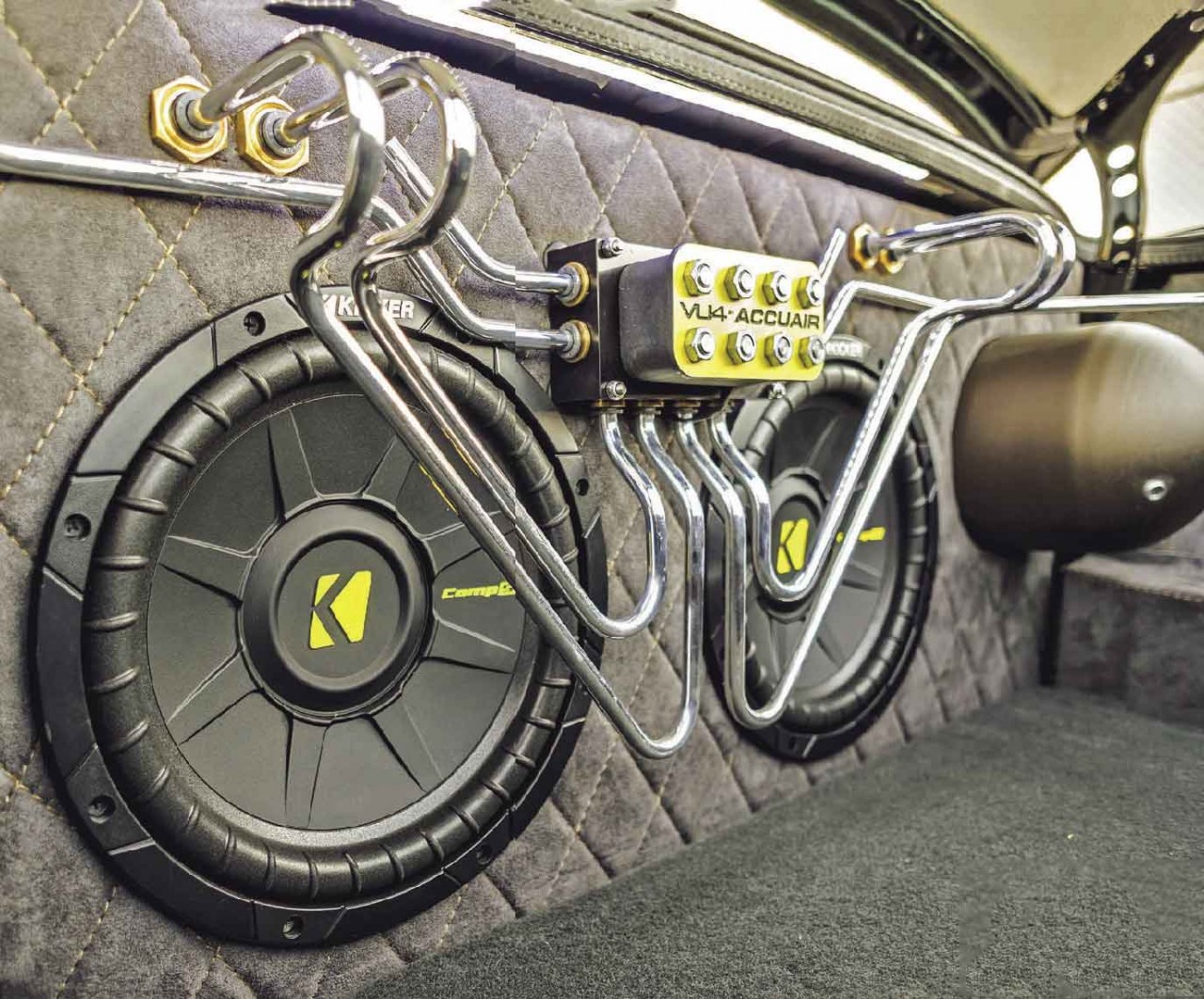 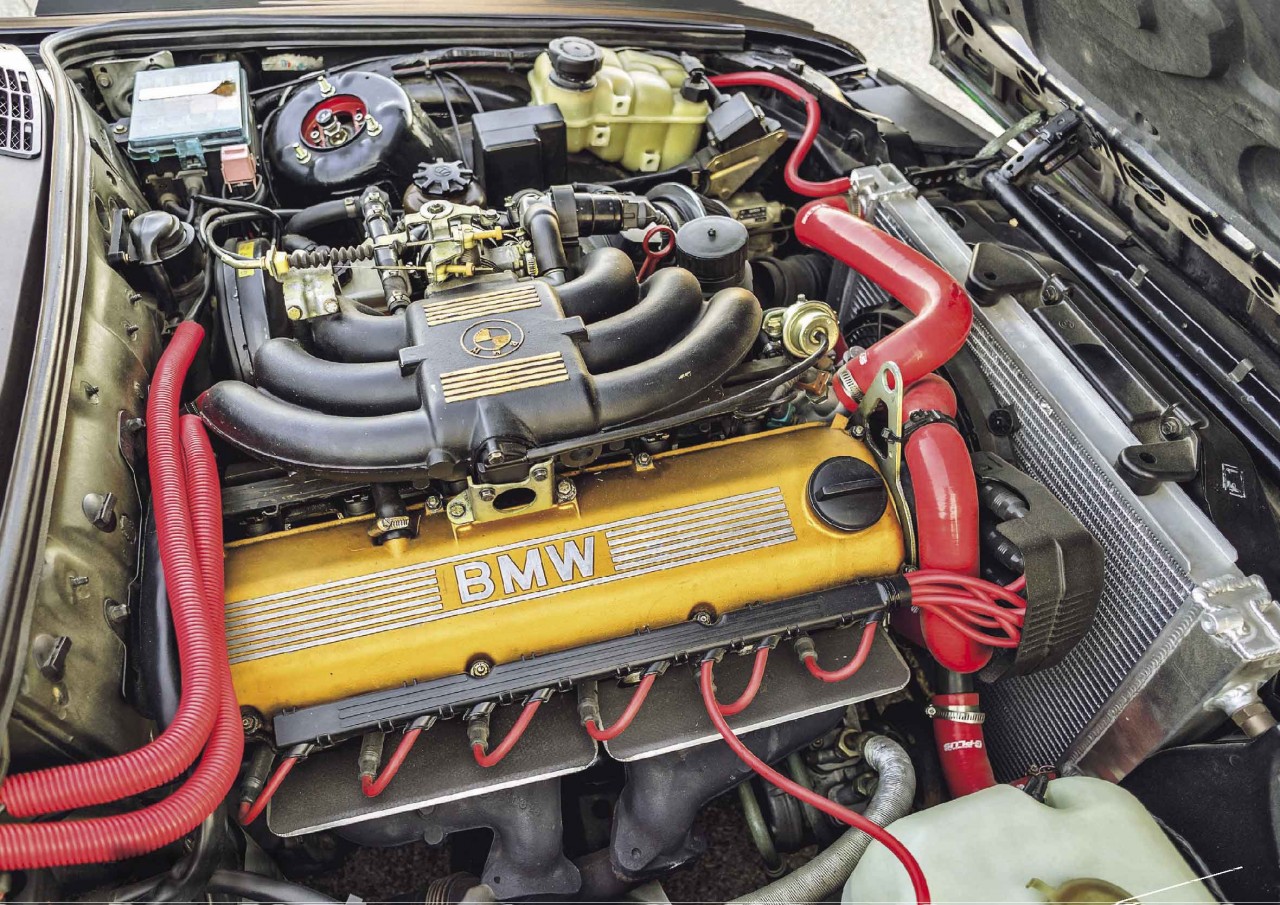 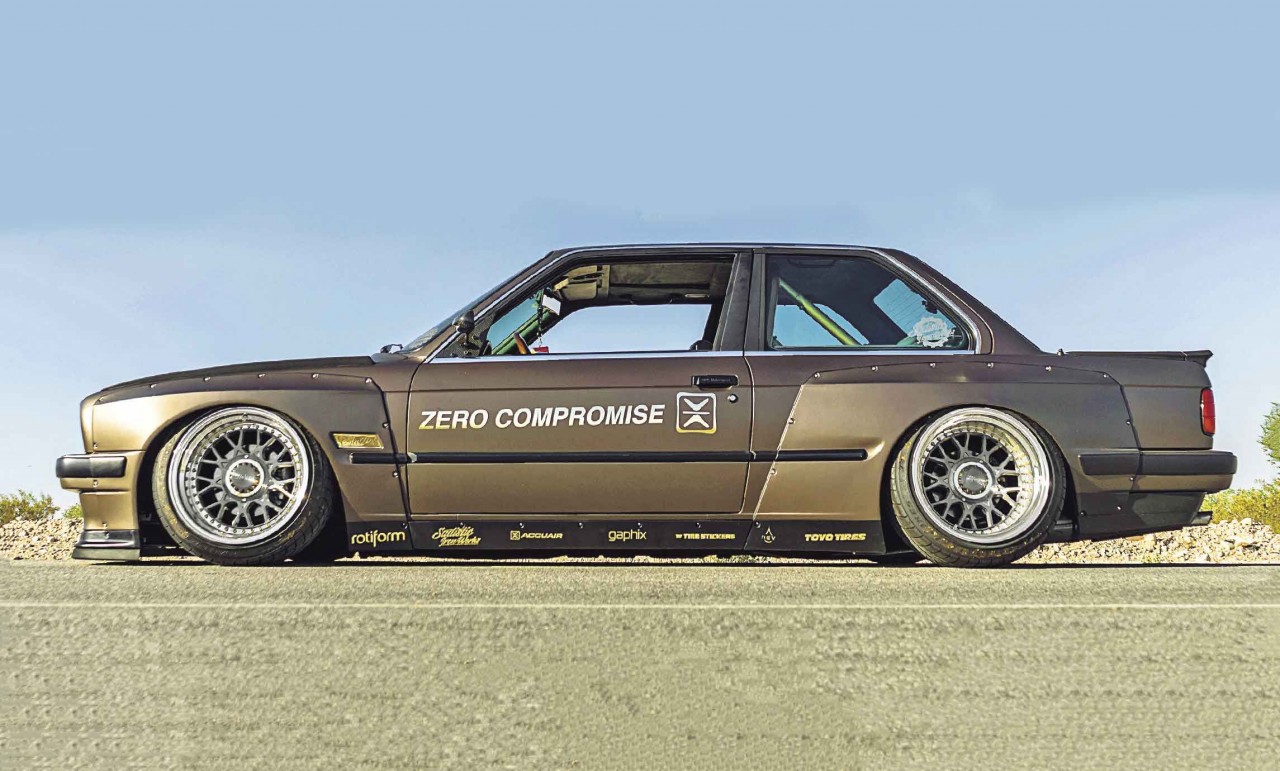 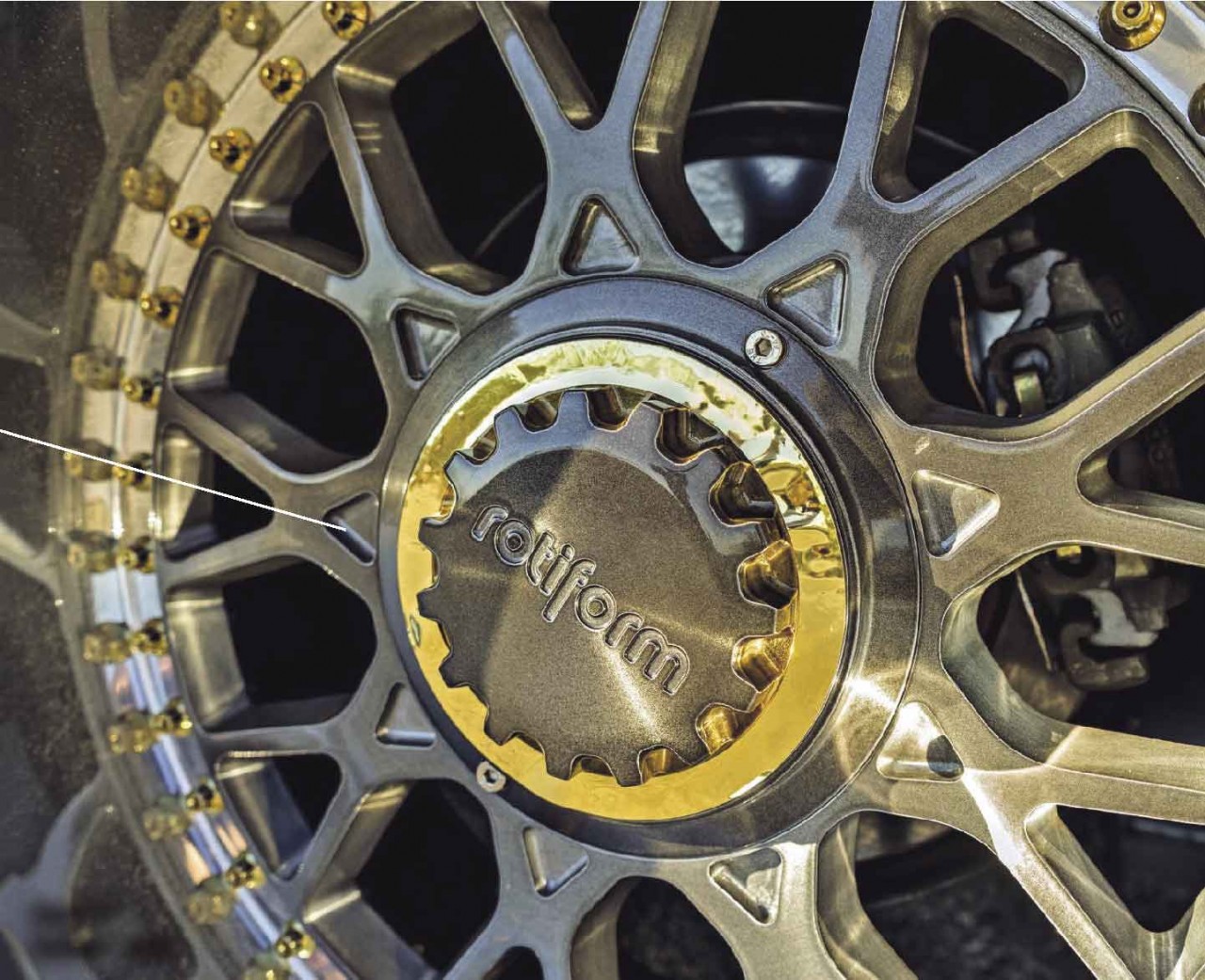 Custom boot build features twin subs and twin tanks. Engine has been left stock, but a swap is on the cards.   Body-drop means this E30 goes ultra-low. Sexy 17” Rotiform RSEs.