Richard Attwood, the veteran racer who brought home Porsche’s first Le Mans win, says he hasn’t set foot inside a 914 for almost fifty years. He tells James Puttock, the owner of the wide-arched Signal Orange GT evocation sitting outside the Porsche Experience Centre, the mid-engined marvel was always the practice car he and his colleagues tried to avoid if given a choice between the Targa-topped roadster or a 911 prior to racing. Richard is known for being a harsh critic – one of the reasons he’s so popular with race engineers and pit crew – and James is understandably concerned his 914 might end up being on the receiving end of a negative review from the former works racer following his appointment as tutor for James’s driver coaching session at Silverstone. Nothing could be further from the truth. Five decades may have somewhat clouded the memory.

“I wouldn’t say Richard ate his words, but he was genuinely surprised at how well my 914 handled on the track. He told me his lasting impression of the model was nothing like what he was experiencing from behind the wheel of my car. He was genuinely taken aback by how well balanced it was,” smiles James enthusiastically, although he shouldn’t be too surprised at the ability of Porsche’s classic roadster to change opinion. After all, by his own admission, he “hadn’t looked twice” at the model prior to being taken out for a spin in a mate’s modified example a few years ago.

“I traded in a 1972 911 2.4 E for a faithful Carrera 2.7 RS replica built by the guys at Canford Classics,” says the fi lm and television translation operative. “I’ve had plenty of use out of the car in the UK and overseas, taking part in many historic racing competitions. As 911 prices have crept up, however, I’ve been made acutely aware of the financial value of the car and the significant cost of losing it to an accident. To my mind, Porsches are there to be used, and while I don’t intend to treat my 911 as a garage queen, I do want to avoid causing it damage in a racing environment.” 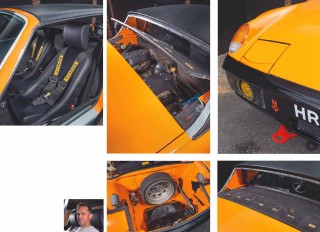 The solution was to begin the hunt for a second old-school Porsche which could be used in anger at the track. “I’d dismissed the 914 prior to time spent in my mate’s car, which had been treated to a 2.2-litre flat-six conversion. I was amazed at how well the little Porsche handled around the twisty country lanes we found ourselves bombing along. The car was super-quick!” he says. The afternoon served to open his eyes to the merits of the air-cooled classic, leading to his decision to search the classifieds for 914 a short while later.

“Europe was the obvious place to start looking, but the truth of the matter is the 914 was far more popular in the United States. Furthermore, there’s a big community of 914 owners and parts suppliers across The Pond,” concedes James. He registered with the US-based 914world.com online forum and published a post outlining his hope of finding a 914 already converted to GT specification. “You’re going to have to be patient!” was the response he got to announcing his requirements. Nevertheless, he was soon alerted to the availability of a number of potentially suitable cars. “For one reason or another, none of them fi t the bill,” he sighs, citing misinformation, bidding wars and the high risk involved in buying a car without seeing it in the metal as the key obstacles in securing a successful purchase. 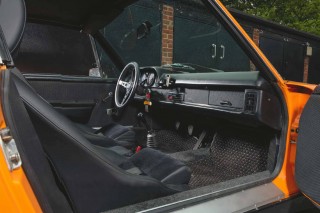 Just as he was beginning to lose faith, Lady Luck played a blinder by presenting James with the 914 he would go on to import into the UK. Boasting just three owners from new and originally built as a two-litre car in 1974, it had been fully restored in the early 1990s. Then, in 2012, a historic Porsche racing specialist (the owner of several short-wheelbase classic 911s) converted the car to six-cylinder power by fi tting the three-litre engine from a donor 911 SC. Completely overhauled and treated to JE forged pistons and Weber carburettors, the engine was joined by a rebuilt dog-leg side-shift transmission fi tted with race ratios, including a longer fi rst gear. GT-aping equipment fi tted included a chassis strengthening kit, bigger brakes and a front-mounted oil cooler. Finished in dazzling coat of OEM Ivory White, the car wanted for nothing. James didn’t think twice about arranging for it to be shipped to Blighty.

“In many respects, the car was perfect,” he tells us, recalling the inspection he subjected the new arrival to after its arrival at Southampton docks. “The extensive engine and chassis upgrades meant most of the hard work had been done, yet I needed a wider track width for circuit use, which meant bigger wheels and wider wheel arches. I also wanted to take styling influence from the trio of Signal Orange 914-6 GTs which competed at the 1970 Marathon de la Route, a punishing eighty-six-hour endurance race held at the Nürburgring.” 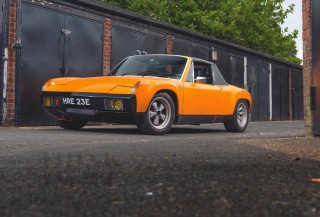 Obviously, serious bodywork alterations were required, including replacing the car’s chrome bumpers with GT-spec fibreglass parts. There was also the matter of applying a fresh lick of paint in a completely different colour! Fortunately, help was at hand. “I’m good friends with Richard Morgan at Electric Classic Cars,” continues James, namechecking the modifier who built the electric-powered 1979 911 SC Targa on the cover of our last issue (order a copy at bit.ly/issuesup). “He has plenty of experience racing, rallying and tuning 914s, and being based in Wales, is able to take advantage of a huge number of rally car and bodywork specialists located close to the Electric Classic Cars workshop.”

Richard acted as project manager for the desired changes, which saw James dash to Germany and back for FSH high quality fibreglass GT bumpers, sills, valances and oil cooler scoops before sending them across the border along with a new set of steel wide wheel arches. Harry Hockly Motorsport was given the job of fitting the curvaceous panels, as well as fabricating steel sill extensions to match the contour of each revised wing bottom.

A flat-four feels cramped in the confines of a 914’s engine bay, so you can imagine how tightly packed it is with a six-cylinder lump bolted into place. Routine maintenance often involves dropping the engine, something James is keen to avoid. “A hole was cut in the bulkhead to enable easy access for belt changes,” he reveals. Continuing the theme up front, a louvered panel was installed where the car’s air-conditioning pump usually sits, enabling air to pass through the oil cooler and out through the floor. Additionally, safety harness anchor points were welded into place before the car was painted in its flawless covering of Signal Orange. Reassembly followed, as did the routing of heat-resistant oil cooler pipes through the car’s immaculate bodywork. 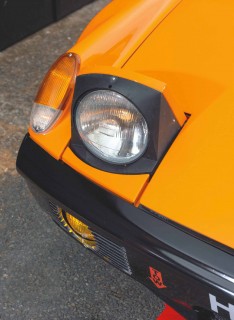 With a Classic Retrofit CDI+ ignition unit upgrade, a RennShift short shifter, new BF Torino seats, wide Minilight rear wheels, Toyo Proxes R888R street-legal track tyres and an order placed for a Safety Devices roll cage, the reborn 914 was handed to Porsche specialist, Maxted-Page, for a fuel system tweak (including a rebuild of the carburettors and the installation of a Holley fuel pump) resulting in an estimated 210bhp. Since that time, James has enjoyed familiarising himself with his trick track toy, a 914 which handles like it’s on rails. “Anti-roll bars front and rear, plus Koni suspension certainly helps,” muses James, who tells us he’s looking forward to more track time at Silverstone, as well as a planned outing to Spa following his car’s visit to the Le Mans Classic a few weeks ago. If you’re looking for a route into air-cooled Porsche ownership which won’t deplete your bank balance like the purchase of a classic 911, then you’d be well advised to consider acquiring a 914. As James’s track toy proves, these are brilliant cars offering a lot of fun in stock trim, but with a few choice modifications, the German two-seater has the potential to surprise even those who previously dismissed the model. Don’t believe us? Just ask Richard Attwood!

Above James’s three-litre 914 is producing an estimated 210bhp following an overhaul of its fuel system.

The Marathon de la Route event was held between 1965 and 1971. Porsche entered a 911 R featuring a new Sportomatic gearbox in 1967, recording a victory with Vic Elford, Hans Herrmann and Jochen Neerpasch at the wheel. Porsche won again with the 911 in 1968, but by 1970, it was the turn of the 914-6 to show the world what it could do. A one-two-three finish perfectly demonstrated the Targa-topped roadster’s abilities! The winning car was driven by Gerard Larrousse, Helmut Marko and Claude Haldi, racking up 360 laps. The remaining 914-6s finished close behind.