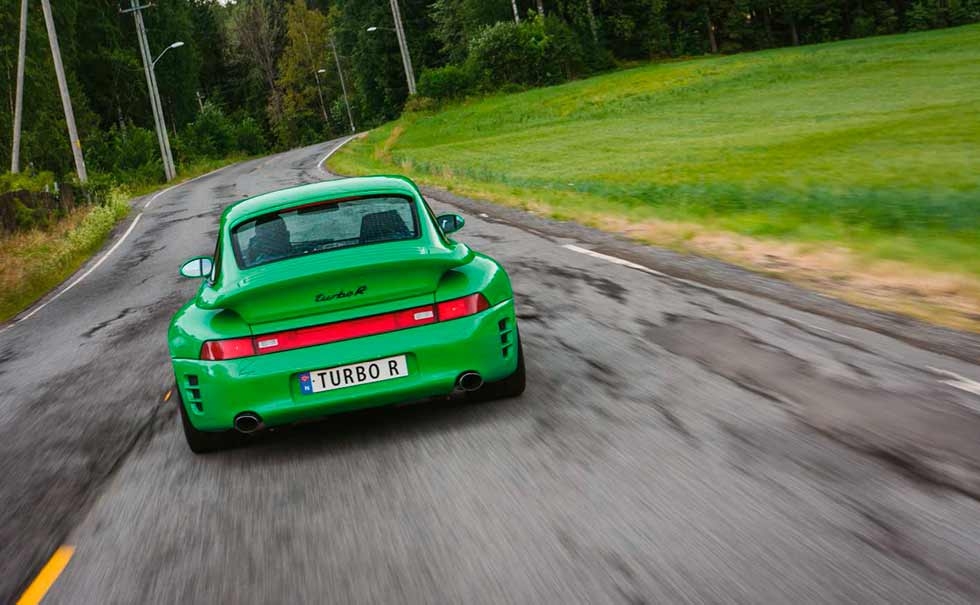 Ruf Turbo R Pfaffenhausen’s 490hp reincarnation of the 993 reviewed. Want a turbocharged flat six that’s faster and rarer than a limited-edition Porsche Turbo? Only a Ruf will do… Written by Lee Sibley. Photography by Rich Pearce.

As you will have seen by now from this special issue, Porsche has a rich history of building very unique and exceedingly rare iterations of its 911 Turbo. However, it has long been said among enthusiasts that if you want something faster, better and even more exclusive than a Porsche, go and speak to Ruf Automobile.

What started as a German tuning company specialising in Porsche, Ruf eventually became a manufacturer in its own right in 1981, which meant the cars leaving Pfafenhausen came with a Ruf chassis number – the pinnacle of which arguably came in 1987 with the release of the Yellowbird. Subsequently crowned the fastest car of the year, putting Ferrari’s F40 and Porsche’s own 959 in to touch, Ruf had now well and truly arrived at the top table of automotive manufacturers. The company has gained something of a cult following among enthusiasts ever since.

Still family owned to this day, Ruf’s cars remain hand made from the first instance to the last. This mantra is crucial to the company: Ruf never has nor ever will be anything like a high-volume automotive outfit, and so its cars are rare. Owing to that rarity, plus the fact its customers tend to be rather more private individuals, goes some way to explaining why you’ll not often see a car publicly for sale in the marketplace.

Not all cars are ‘born’ with a Ruf ‘W09’ chassis, though. An alternative to approaching the company about building a car from scratch (and arguably quicker, seeing as the waiting list for an SCR is currently three years) is to take a Porsche to Rufplatz for a retrospective conversion. Erik Nordby’s Signal green Ruf Turbo R here falls into this category, though instead of taking the car to Rufplatz for surgery he happened to make good use of an ex-Ruf technician who now lives near him in his native Norway. This is rare, as usually for a car to be christened as a Ruf, rather than a Porsche with Ruf modifications (though we’ll admit, there can be A fine line between either), the car must go to Ruf’s workshops for the makeover.

So what’s the story of the car we’re looking at? “It was originally a Basalt black MY1996 993 Turbo with X50 Powerkit,” Erik tells me, which makes the base car a highly desirable Turbo model right of the bat.

The Turbo was then treated to a complete restoration three years ago at Porsche Centre Son, Oslo’s main Porsche Centre and home to only the third Porsche Classic dealership in the world, and it was here where the Turbo got the full Ruf treatment. Erik explains: “Ali Acarsoy, one of the technicians at Son, is a German who worked at Ruf for 13 years before coming to Norway. He was responsible for the Ruf conversion on my car.” The original Ruf Turbo R was introduced in 1998, just after Porsche’s last air-cooled Turbo in the 993 had ceased production (though the Exclusive department was still building some of the 345 Turbo S rarities).

Described by Ruf as ‘a package of the last expansion stage of the turbocharged air-cooled flat six engine’, Pfafenhausen developed a twin-turbocharged engine which not only increased power, but minimised lag over Porsche’s effort with the 993 Turbo. The Turbo R’s credentials were thus 490 maximum horsepower at 5,500rpm, with 650Nm peak torque delivered at 4,500rpm, though two more extreme tuning packages were available to take the Turbo R to 520 or even 580hp.

The conversion on Erik’s car included a rebuild of the 993 Turbo’s engine and gearbox, with a resultant 580hp generated at the flywheel – some way above the wheel horsepower quoted by Ruf for its Turbo R and in a different league entirely to the 450hp provided by that factory Porsche X50 Powerkit.

The interior of the Turbo R featured Ruf Sport seats, a three-spoke Sports steering wheel much smaller in diameter than that fitted to the cars over at Zufenhausen, customary green Ruf instrument dials, as well as Ruf’s famous integrated roll cage, in this instance borrowed from the CTR 2.

The Turbo R’s body differs from Porsche’s 993 Turbo by way of revised front and rear PUs which feature additional vents for increased airflow, revised mirrors, and lighter alloy wheels to reduce unsprung mass. Erik’s car has all of this, minus the integrated roll cage inside, which he says would be hard to get approved for the streets of Norway.

That the odometer shows only 13,000 kilometres shows this is a coveted car that’s cared for accordingly, though it’s certainly not the kind of beast you’d jump in to simply pop to the shops in any case. I’d soon find out why.

Taking a seat inside, its Sports seats are supremely comfortable (and heated) with plenty of lateral support offered by generous side bolsters. The steering wheel ahead is possibly a little too small for my personal liking, yet it’s purposeful, offering a firm, chunky grip.

Its engine note is more aggressive than the 993 Turbo under load, a state that’s hard not to go chasing for in the Turbo R. Yes, it has a brilliant level of sophistication to its ride at low speeds, but it’s so damned fast and so impressively responsive that it’s hard to restrain from a prominent squirt of the gas pedal each time the road opens up ahead of us.

There’s so much power on tap, this is evident – our problem however is putting it down on the road. The surface beneath the Turbo R’s tyres is damp and we’re spinning up in second and even third gears, even with the aid of four-wheel drive. Managing power and grip proves a tricky task, and we’re simply not able to exploit anything like the car’s full potential on the winding roads around Oslo. This is a car for a perfectly warm, dry day, which goes some way to explaining its low mileage at its present home here in Norway.

That said, our short drive is still enough to showcase the engineering qualities of a car sporting the Ruf name. There’s clearly a beautiful balance between clutch, gas and gearbox, the revised ratios better suiting the Turbo R’s blistering surge of power, most evident after the rpm needle swoops past 4,000rpm.

So what does the Ruf Turbo R bring to the table? It is quite simply one of the most blistering experiences you will likely come across at the mercy of an air-cooled flat six. Now 20 years old (factory-bred Turbo Rs were produced from 1998), its performance is so polished yet so thunderous that it is still positively enchanting today. That you can have this at the wheel of a car which assumes the profile and silhouette of the last air-cooled Porsche Turbo only adds to its charm.

Build numbers of the Turbo R are hard to establish, complicated by cars built at the factory and cars built retrospectively, but as Erik has shown, if it’s the utmost in both exclusivity and performance from a turbocharged flat six that you’re after, you need look no further.

RIGHT Porsche Classic radio brings modern tech to a retro interface; Ruf sports seats provide grip and comfort; Alois gives his seal of approval. BELOW Even with 4WD, the Ruf Turbo R has brutal levels of power and torque at its mercy.

ABOVE Revised Ruf touch points inside include steering wheel, pedals, seats and shifter, while the dial faces have been converted to Ruf’s iconic green.

The Turbo R is one of many pulsating turbocharged cars to get the Pfafenhausen treatment. Here are five of the best:

Ruf’s first Turbo-derived car arrived in 1977, beginning a trend of not only usurping the Porsche Turbo in terms of performance, but exceeding its development, too. As Porsche was making deliveries of its 930 3.0, Ruf was busy announcing its Turbo 3.3, this enlargement a result of Ruf using larger pistons. Mated to a five-speed gearbox, Porsche would wait 14 years before following suit.

The car responsible for putting Ruf firmly in the international spotlight, the Yellowbird was named so after a sprint test for Road & Track magazine in 1987 when its 211mph top speed as set by reporters made it the fastest car on the planet. 29 of the original CTRs were made, and you can expect to stump up a seven figure sum to prize one away from its owner today.

Quite simply the only mid-engined sports car we’ve ever dared to print on the main pages in the history of Total 911, the CTR3 was released in April 2007 to mark two decades since the release of that record-breaking original. Staggering performance came via a 3.8litre, Twin-turbocharged flat six shoehorned inside a body built entirely by Ruf for the first time.

The RCT is a car held in high esteem by Ruf. Alois’ daily drive, the RCT (Ruf Carrera Turbo) is still built today, Pfaffenhausen saying the mantra for this 964 based monster is “if it isn’t broke, don’t ix it”. A single turbocharger mated to a flat six engine is what Ruf also describes as traditional simplicity, even if its six-speed manual gearbox once again usurped Porsche’s equivalent.

Its acronym standing for Gruppe B Turbo Ruf, the BTR was based on the G-series Porsche models, albeit with a 3.4litre, turbocharged flat six hiding under a large, fixed rear wing. Available in either narrow or wide-body form, the later BTR III of 1988 to 1989 was the first single-turbo engine to be fitted with Motronic engine management, again beating Porsche to the development.