When you cast your mind’s eye to 1950’s BMWs I’d wager that the iconic 507 – built between 1955 and 1959 – is the first vehicle that will pop into your head. Of the post-war classic BMWs the 507 is almost certainly the most revered, but it wasn’t the only V8-powered model of note to emerge from this troubled period in the firm’s history. Like the rest of its German automobile making counterparts BMW was in financial dire straits immediately following World War II. Its 501 and subsequent 502 V6 models were successful in assisting the firm’s recovery to an extent, but when these models began to age a new design direction was required – and fast. Enter Max Hoffman, the Austria-born New Yorker famous for importing luxury European cars to the post-war American Market. Automotive enthusiasts have Hoffman to thank for the jaw-dropping Mercedes-Benz 300SL Gullwing W198 and Porsche’s iconic 356 Speedster – so too BMW’s beautiful 507, one of the first post-war German cars to boast an eight-cylinder engine. 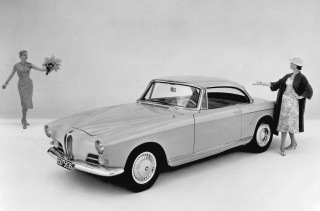 What went wrong at BMW during the 503’s reign?

Styled by former Studebaker designer Albrecht Graf Goertz and engineered by Fritz Fiedler, the 507 was a certified hit and remains a design icon today. Examples were owned and driven by everyone from Elvis Presley to John Surtees, but BMW’s aluminium V8-powered sports car cost the company dearly at a time when it desperately required an injection of cash. Just 252 examples were produced (prototype and show car designs accounted for a further three), and a measly 39 of those made it across the Atlantic to the United States. It was a far cry from the 2000 examples Hoffman had predicted America would simply devour.

The 507’s more conservatively styled four-seater offspring, the 503 looks positively common by comparison – BMW built some 412 examples of it in coupe and soft-top guise (139 being Cabriolets) between when series production started in 1956 and ended in 1959. But ultimately both cars generated vast losses for BMW, that despite their eye-waveringly high asking prices. Today it is estimated that approximately 240 507s survive with no more than 250 503s remaining. Equally as rare as its revered relative then, the 503 is an often overlooked machine.

Debuted in 1955 at the Frankfurt Motor Show, the 503 boasted an elongated 507 chassis in order to accommodate four passengers (2+2) over the former’s two. Despite its wholly less glamorous persona, the 503 outsold the 507 from the word go – customers took first deliveries in 1956. Available in both coupe and Bertone-bodied Cabriolet forms, the drop-top variant was one of the first European cars with an electrically operated soft top. Like the 507, the 503 tourer took its genesis from the 502 sedan before it, the pair ran reworked versions of the 502’s ladder chassis – while the 503 shared wheelbase dimensions with the 502, the 507 merely ran a shortened version on account of not having to accommodate extra passengers. The 503 used more of the 502 than the sporty 507; both front suspension and steering system were carried over, so too the brake setup. Early 503s – up to 1957 – ran a shaft between the engine and (remote) gearbox, later cars boasted the 507’s more conventional gearbox and linkage arrangement with the shifting mechanism moved from four- speed manual column to floor.

Continuing the theme, the 502 also donated its engine, though the 3.2-litre V8 (3168cc overhead valve alloy block-and-head) gained twin Zenith carburettors and a chain- driven oil pump, power was a respectable (for the time you understand) 140hp delivering enough performance to be useful. However, the 503 was more about touring; roof down or manual sunroof cranked open, soft, burbling soundtrack giving chase. Of the trio; 502, 503 and 507, it was undoubtedly the latter with the performance advantage. Starting with a 10hp deficit in power and 250 kilo weight disadvantage (though both used alloy body panels, the 507’s shorter wheelbase handed it an advantage on the scales), the 503 managed the zero-to-62mph run in 13 seconds before continuing on to a top speed of 118mph. But the 503 was no hard charger, more a relaxed, softer drive, happy to produce the bulk of its pulling power between 1000-4000rpm and requiring pre-planning when it came to deploying any stopping power.

So what went wrong at BMW during the 503’s reign? A big part of the problem was costings. Hoffman had intended for the car to be priced to sit between the poorer British Triumph sports cars of the period and the ground-breaking Mercedes-Benz 300SL W198, the creation of which he had a hand in. Off the back of this price point Hoffman assured BMW that he could shift thousands of their cars in the US, but when BMW first began selling first the 507, then the 503 some seven months later, it did so with a sticker price two-and- a-half times greater than Hoffman’s original number. It would be easy to dismiss Hoffman’s point of view in the argument were it not for his successes with other brands during the 1950s and 1960s. While the 503 was always intended to be of a quality design, BMW’s engineering processes made it inordinately expensive to produce – its welded tubular frame, aluminium body panels and all-alloy V8, and interior luxuries where ahead of their time but cost plenty. BMW had effectively shot itself in the foot.

Though the 503 outsold it, undoubtedly the 507 is the car largely remembered as the greater success, that despite the 503 reportedly receiving the endorsement of none other than Battista Farina himself – the Italian designer behind Pininfarina – who proclaimed the practical yet elegant 503 the finer design of the two upon their debut at Frankfurt in 1955.

Today, BMW 503s are much sought-after by car collectors, like the 501, 502 and 507 with which it is linked, the 503 showcases a fascinating period in BMW history – arguably its most important. On the brink of financial disaster and amid a shift in direction that would shape its future, the 503 hails from perhaps BMW’s darkest post-war hour.

Curtain. Its Munich plant remained heavily damaged thanks to intensive Allied bombing raids. Car production at Eisench restarted under Russian watch with the so-called ‘EMW’ cars, but in Munich the BMW factory was churning out nothing more interesting than agricultural machinery, bicycles and even utensils in the immediate aftermath of the conflict.

Motorcycle production did not get underway until 1948, and it was the early 1950s before BMW could begin to build cars in Munch. The first post-war BMW car was the 501 of 1952, a luxury saloon, it initially ran a six-cylinder engine of pre-war descent before a 2.6-litre V8 was fitted and further advances followed. In 1955 the car received a 3.2-litre V8 and became known as the 502, the engine itself had much potential to work as well in a sports car as it had in a luxury sedan.