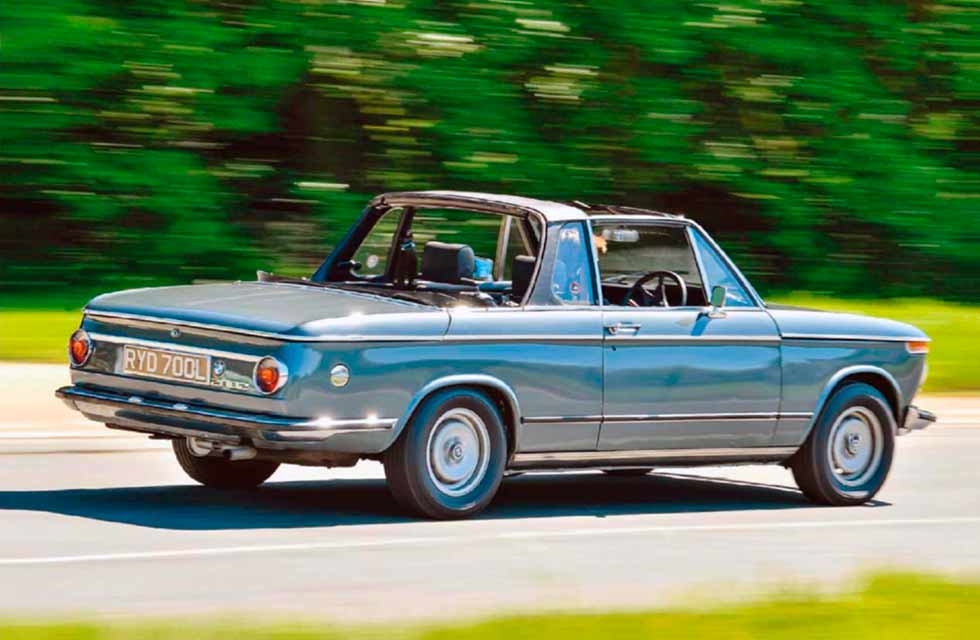 Is this 1970’s classic the definitive drop-top. Those looking to invest in a classic BMW 2002 will often gravitate towards coupe or Touring versions, instead the unique and far rarer Baur Cabriolets offer a literal breath of fresh air… Words: Simon Jackson. Photography: Matt Woods.

During the 1960s something of a public health panic erupted amongst automotive consumers. The country at its epicentre was the United States where passenger safety was becoming a major issue. In 1960 alone Stateside ‘unintentional injuries’ resulted in 93,803 deaths, 41 percent of those were through car crashes. Published in 1965, Ralph Nader’s book entitled Unsafe at Any Speed: The Designed-in Dangers of the American Automobile focused on the lack of inherent safety features in vehicle design. It is heralded as a watershed moment. By 1966 vehicle safety was a firm government focus, the Highway Safety Act and National Traffic and Motor Vehicle Safety Act saw the Americans set certain standards for both vehicles and highways at a federal level. While road routes were quickly improved via increased line painting, signage, reflectors, and guardrails’ separating traffic, cars were required to follow suit. Car manufacturers began introducing the safety devices that today we largely take for granted; seat belts, head rests, crash deforming structures and shatter resistant glass. By 1970 a downward trend in vehicle-related deaths began to form in America, and by 1975 a dramatic nosedive in numbers indicated that the measures that had been introduced were doing their job.

Alongside the aforementioned safety features convertible cars came under fire. Deaths caused by topless vehicles rolling over during accidents became yet another concern in the States – though worries were not isolated to the USA, the rest of the world became equally obsessed. Various solutions to the issue of convertible vehicle design presented themselves but not all of them came from across the Atlantic.

In Germany Porsche devised what it called the ‘Targa’, a type of convertible 911 with a rollover hoop mounted across its mid-section designed to protect occupants should the worst occur. The concept behind Porsche’s Targa gave rise to, of all things, a BMW. A Stuttgart resident just like Porsche, Karosserie Baur – translated from the German as ‘coachbuilder’ – had been established in 1910. It became a specialist in folding soft top roof mechanisms and, in the 1930s, became respected for coach-building passenger vehicle bodies. Baur grew links with BMW following World War II, building bodies for the 501 and 502. In more modern times however it was fellow German coach building specialist Karmann that BMW had turned to, Karmann built the body-in-white for the Neue Klasse 2000C and 2000CS coupes. However, after the 1600-2 (later renamed 1602) arrived in 1966 Karmann understood BMW’s appetite to produce a convertible version. BMW had already toyed with the idea of a convertible Neue Klasse, Karmann built the bodies for it, and the 1600-2 was essentially a shortened Neue Klasse – on paper it all fitted together. And so it was that the Osnabriick-based specialist built a prototype convertible version of its own, only the design was rejected by Munich. Karmann’s loss was Baur’s gain.

Karosserie Baur put forward its design, the concept for which involved less structural changes to the 02’s chassis than the Karmann option, making it cheaper and simpler to produce. Cost versus return had been a major sticking point with the Neue Klasse convertible idea, so Baur’s approach, which retained the car’s form, won favour. Baur would hand-build the new ‘targa-style’ BMW models – Porsche had already registered the Targa name and moreover had a strong historical links with its namesake, the Targa Florio road endurance race in Sicily. In 1967 Baur’s prototype convertible emerged, using as its basis the chassis of the ’02 saloon. Somewhat more radical than the car we know today, it sported a heavily revised rear end, however that design was rejected by BMW in favour of one which retained the saloon’s rear aspect – likely a cost-saving measure. The revised design was offered from 1967, built to order using conventional coupe shells – all left-hand drive – shipped from Munich to Baur’s north-west German facility. The base cars were partly dismantled by Baur in order to accept chassis strengthening measures designed to improve torsional rigidity. With sills removed, the roof sections were cut away including the removal of the B- and C-pillar, before Baur added in its own parts to create a ‘full’ convertible (think E30 cabriolet in style). The Baur additions included an entirely removable fabric roof which could be stowed behind the car’s rear seats, in addition interiors were heavily retrimmed.

If nothing else Baur’s creation was striking, but it attracted criticism as a driver’s prospect, the scuttle shake caused by a lack of stiffness – despite those chassis strengthening measures – being the subject of most gripes. Baur produced the 1600-2 until 1971, at which point the 2.0-litre (1991 cc) version of the M10 engine from the 2000CS coupe was offered, an upgrade from the 96hp 1,6-litre (1573cc) version of the same mill. However, adding performance to the drop top served only to further reveal the shortcomings of the model’s chopped and changed chassis. A return to the drawing board gave birth to the 2002 Cabriolet as we more commonly know it.

Additional rigidity was the name of the game. For this Bauer added yet more metal to the mix, namely its recognisable rollover bar, an involved and time-consuming process conducted by hand. Strengthened inner and outer sills along with an entirely fresh B-pillar – the original discarded along with the rear roof section and rear window. The new B-pillar featured opening quarter light windows and a new roof section much like a giant moon roof – the car’s roof line was lower than that upon which it was based – out back came a canvas folding roof and plastic rear window reminiscent of the early Porsche 911 ‘soft window’ Targas of the late 1960s.

As before a retrim covered off the alterations aesthetically, unlike before the new roof section could be kept in situ for driving. Baur fitted supports in the boot for resting the roof section atop any luggage, if the fabric roof was lowered it could be stowed behind the rear seats.

Production of the ‘new’ 2002 Convertible (or Top Convertible as it was known for the domestic market) began in Spring 1971.

Sales were lethargic, perhaps partly because of the model’s cost which was considerably more than a ‘normal’ ’02, and the timeframe involved in a customer receiving his or her vehicle. The conversion was not the work of a day. Right-hand drive 2002 Convertibles became available in the UK during early 1973, but sales did not compete with those of left hookers, and so it was that production of right- hand drive cars finished earlier than scheduled – left-hand drive cars were built through to 1975. In total only 354 examples were manufactured in right-hand drive form, 260 being pre-1973 early ’round light’ examples – post 1973 cars receiving square tail-lights and black plastic front grille sections. For context 4,210 BMW 2002 Cabriolets had been sold in total by the time production ended in 1976.

While the 1600-2 and 2002 is often most fondly recalled in coupe or Touring guises, the Baur versions offered – and continue to offer – a welcome dose of open-air motoring. Arguably they have become coveted to a greater extent with the passing of time.

In the 1960s it’s no exaggeration to say that many feared the demise of the convertible altogether. Ironically given its impact on vehicle design, and despite BMW’s original wish to offer the car to the market there, the Baur ’02s were never officially exported to the USA. Looking for a classic BMW drop top this summer? You could certainly do far worse than the 2002 Cabriolet…

This car’s unrestored nature very much appealed to owner, Craig

Finished in Grey metallic with a Black leather interior, the 1973 BMW 2002 Targa in our pictures was being offered for sale at the time of writing by Bridge Classic Cars in Woodbridge, Suffolk. One of only 94 right-hand drive models produced for the UK market, the car has a low recorded mileage of just 28,000-miles covered by five owners.

Coming with the car’s sale was a history file containing a provenance letter from BMW confirming its details – dated from 1981. In addition the file was complete with MoT certificates dating between the 1990s and 2017 (when it had last been on the road), old registration documents, service receipts, an original handbook and BMW wallet. Bridge Classic Cars informed us that the car’s engine had been professionally rebuilt.

Craig Ranson, from Bridge Classic Cars, the owner of this car, said:

“I have always loved and admired BMW 2002s. A good friend of mine is lucky enough to own two 2002 Turbos – I’ve seen how much attention they draw and how much pleasure he gets from them out on the track.

“When I saw this 2002 Targa for the first time I knew it was special. I loved the fact that it was not a show winner but it was f a car that you could jump in – whatever the weather – to enjoy it. I could picture it in the 1970s, the guys and girls heading to the beach with the top down – music turned up loud – enjoying the sunshine.

I bought it for my own collection – it was never my intention to sell the car – but * unfortunately sometimes my cars have to go up for sale.”