Overthinking. It’s the modern curse. We just have too much information available to us these days, we’re being constantly and relentlessly bombarded with reams of impenetrable data from all corners of the globe (not that globes have corners, but y’know), and we’re essentially spoiled for choice. We’ve reached saturation point; we don’t have time to absorb a new idea before a fresh one elbows it out of the way and starts jumping up and down yelling ‘Look at me, look at me!’, and is then immediately bumped for something else. Previous generations never had to worry about this. In a world before smartphones, the Internet, and all the other modern buzzwords that your grandpa still enunciates as if they’re spelled in all-caps, information arrived via word-of- mouth and the ten o’clock news. Everything today is just too fast-paced.

Okay, we know what you’re thinking: we sound like relics from a bygone age. Get with the programme, fogeys. (Do people still say ‘get with the programme’? [Or ‘fogeys’?]) But thankfully we’re not alone in this quasi-despair at the pace of digital evolution. Junzo Shibatani is on board with this antiquated way of thinking. For while his Scirocco may feature some very much fashion-forward and bang-on-trend ideas, he certainly hasn’t overthought it. It exists merely as a snapshot of what he wants it to be, no more, no less. Unpretentious, uncomplicated, and honest – a showcase of classic concepts, contemporised. And with this pursuit of crystal-clear thinking, he’s managed to reinvent the VW scene in Japan and make it play to the beat of his own drum. Which isn’t a bad boast, is it? While most people are happy to be players in the game, Junzo tore the hierarchy down and rewrote his own set of rules for everybody to follow. If you live in Japan and you’re into VeeDubs, this is the man to watch… and his influence is crossing continents too. But, having looked at the photos here, you probably aren’t surprised by that. This is one of the cleanest and most eye-popping Mk1 Sciroccos in the world. As with so many car enthusiasts, it all started for Junzo with his father – a race car driver who taught him from a young age to be hands-on with cars, motorcycles, karts and bicycles, as well as simply ‘running faster than anyone else’ in all its forms. There’s an inherent competitiveness, a hunger, so it was inevitable that he would grow up to work in the auto trade and build some cool stuff. But what’s particularly interesting about Junzo’s formative years is that nothing was off-limits, every form of transport was afforded equal respect – so whereas many of his peers would be fiercely patriotic in their modifying pursuits and stick solely to JDM fare, he found a growing fascination with the Euro car scene in Japan. He built himself a tastefully modified New Beetle, won a trophy at a show, and it’s fair to say that his interest was properly piqued… and it wasn’t long before he created what many consider to be his magnum opus – the car that still fills your screen if you type ‘Junzo VW’ into Google Images: a bright purple Mk5 Golf R32. This car, in a not-too-convoluted way, is the one that basically informed the creation of the Scirocco you see here today, as the R32 opened the eyes of the Japanese tuning scene to the USDM-style look that wasn’t really a thing over there until this Golf hit the scene. Celebrity status and magazine features ensued, and Junzo kept the car fresh by painting it piano black and dropping it on Hayashi Racing/Rotiform splits along with air-ride – a formula that ultimately became the menu of choice, the to-do list for VW modifiers in Japan.

“You see, Japan’s tuning scene is quite ostentatious, there’s a lot of look-at-me zaniness, and subtle cars tend to slip under the radar”

The Scirocco first appeared on Junzo’s radar back in 2011. With a growing interest in classic Volkswagens, he happened upon this car by chance and just had to have it – a 1977 example in genuine USDM spec. It was complete and in all-original condition, with the interior (which, you’ll note, remains today) in particularly fine form. Now, he didn’t want to rush this. With the Japanese Euro scene dominated, he was happy to rest on his laurels while the next move was considered. So the first step was to source some genuine new-old-stock BBS E76 wheels, convert them to a 15” diameter using some Rotiform lips, bolt them to the Scirocco, and tip-toe the car out into the wild to see what happened. 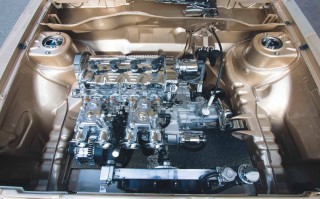 …and what happened was, well, not quite as seismic as the waves made by the purple Golf. You see, Japan’s tuning scene is quite ostentatious, there’s a lot of look-at-me zaniness, and subtle cars tend to slip under the radar. None of which bothered Junzo, of course; in fact, it spurred him on. If people were going to ignore a subtle build, they could at least be ignoring an extraordinary, mould-breaking subtle build. This, then, was a man with a plan – and he’d be needing a sidekick to see it all through to fruition. Such a partner was found in Shinkurasan of Blackburn Motor Sports in the Hyogo Prefecture, one of the most revered water-cooled VW builders in Japan. And so commenced an epic five-year project!

The key touchpoints of the car are grounded in subtlety: the bodywork is all original, and the shell has simply been restored to as-new spec and repainted in its original factory shade. Similarly, the interior was refreshed but left alone. Where things get really interesting is in the details; the chassis, for example, follows the purple Golf’s lead by running an Air Lift Performance bag setup with 3P management, while those BBS rims were rebuilt to zero-lip with proper BBS parts. What’s most amazing, however – and if you’ve glanced over the engine bay shots, you’ll already have been stopped in your tracks – is the attention to detail under the bonnet. Junzo and Shinkura-san took an ABF swap as their starting point, converting it to run twin Weber 45s and performing a whole bunch of head work along with uprating the pistons, valves, cams, crank and ignition, while the gearbox is an 020. But the headline news in that shaved and wire-tucked bay is the chrome – because there’s just so, so much of it! The list of parts which have been carefully and lovingly chromed includes the rocker cover, engine mounts, transmission mounts, steering rack, driveshafts, shift linkage, alternator and bracket, cam gear, oil pump gear, crankshaft gear, lightweight billet crank, alternator and water pump pullies, carb intake manifold, carb trumpets, distributor and starter motor, and it’s all just so awesome we can barely stand it. Every millimetre of the car is flawless inside and out, and seeing that incredible engine bay is like being let into a tantalising secret; you almost feel sorry for the pedestrians who see this dazzling Scirocco rolling down the street…

they think they’re just seeing a looked-after classic, but the truth of the matter is that there’s a near-unbelievable amount of intrigue secreted away beneath the skin. The more you look at it, the more details you spot – it’s almost hard to believe it’s a functional car, it really belongs in an art gallery with its bonnet up.

With the Scirocco’s rebirth complete, mentor and automotive lifestyle correspondent Ozawa Report suggested to Junzo that perhaps he should enter the fabled Hot Rod Custom Show in Yokohama, with the aim of going head-to-head with friend and longtime rival Masafumi Eto. Eto-san is also an aficionado of the USDM scene in Japan, and his own masterpiece – a US-spec Honda Integra GS-R, right-hand drive and in a trim level never available in the JDM – was the ideal rival. Two ideologically similar cars, but a (new) world apart.

This, it turned out, was a magnificent idea. Seven years previously, Junzo and Eto-san had shocked the domestic scene with their Mk5 Golfs, and here they were again, side by side, showing Japan how subtle and US-influenced builds should be done right. This was the rematch, the showdown, the two kingpins of the genre battling it out for everybody to see. And the result? A bloodbath? Well, Junzo’s car took ‘Best VW’, Eto-san’s took ‘Best Domestic’, so everybody was happy – but what the Scirocco achieved was really quite incredible. No water-cooled VW had ever won that prize in the show’s twenty-six year history, it had always been the preserve of air-cooled classics. In one fell swoop, once again, Junzo changed the scene.

All of this was achieved not by following the crowd, or by trying to appease people online with constant and confusingly overthought trend-aping modifications. This guy’s approach is simply to do things his own way, and this nonchalance gives him the freedom to excel. You see, Junzo’s really rather good at this stuff – and that’s why, when you want to know about the Euro scene in Japan, he’s the one you need to look at. This outstanding Scirocco isn’t just a domestic champion, it’s world-class. It’s a game-changer like no other.

This was the rematch, the showdown, the two kingpins of the genre battling it out for everybody to see. And the result? A bloodbath?

“it’s almost hard to believe it’s a functional car, it really belongs in an art gallery with its bonnet up” 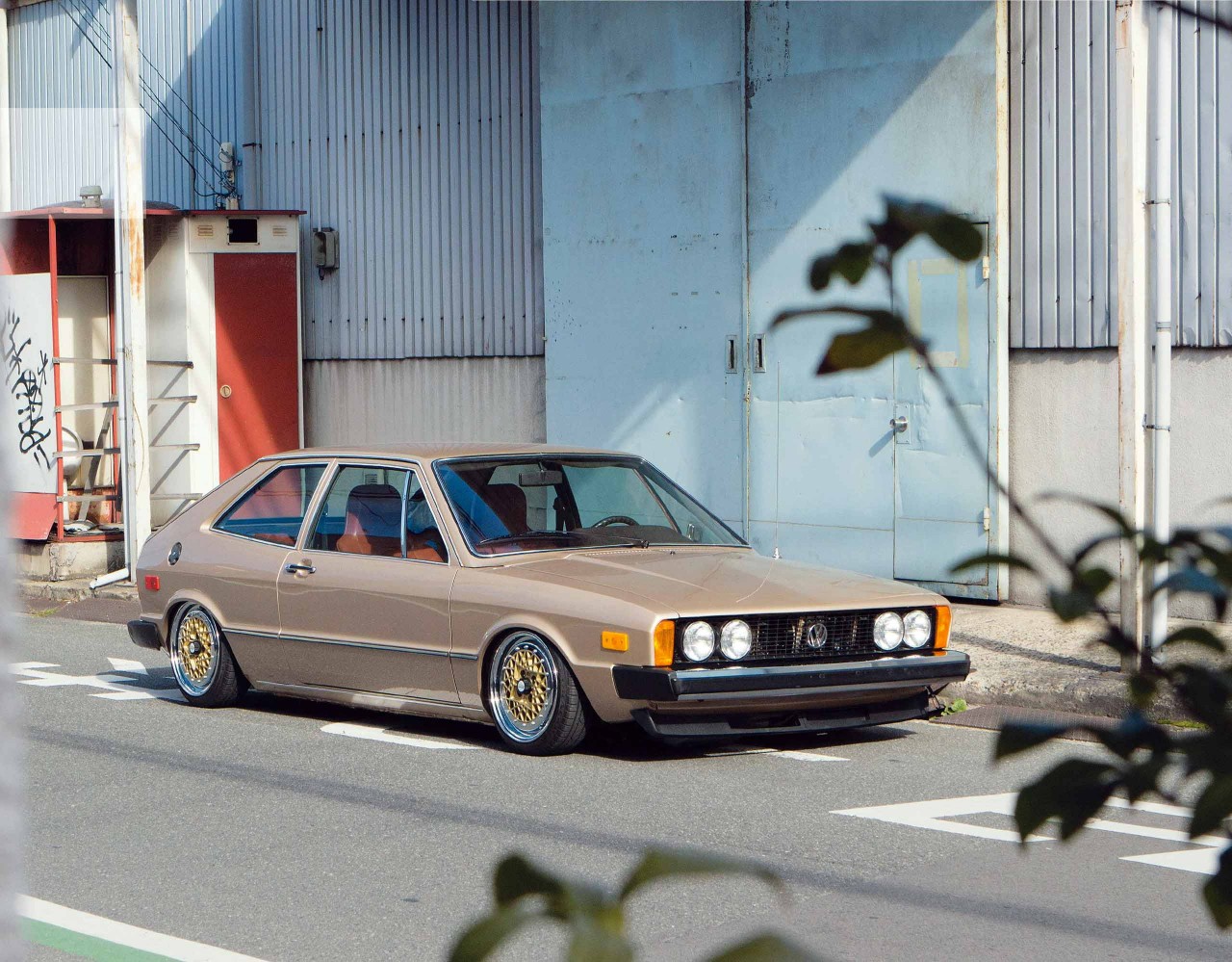 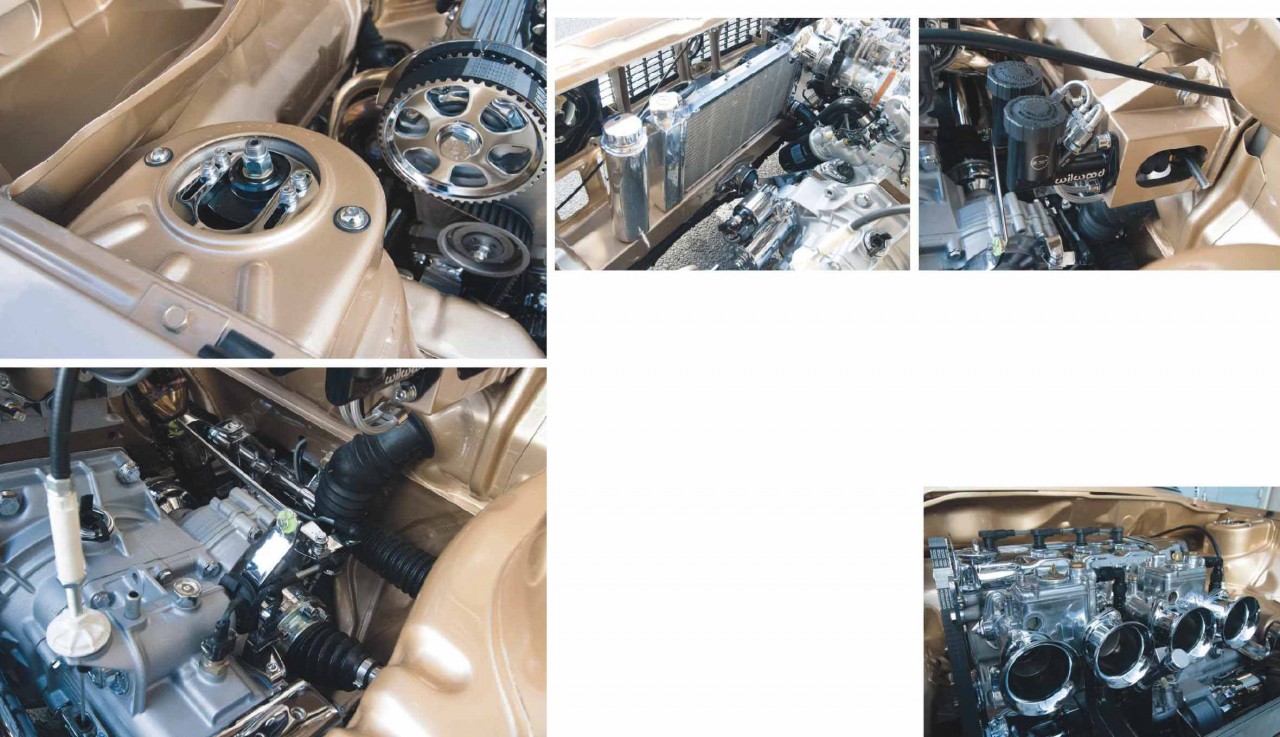 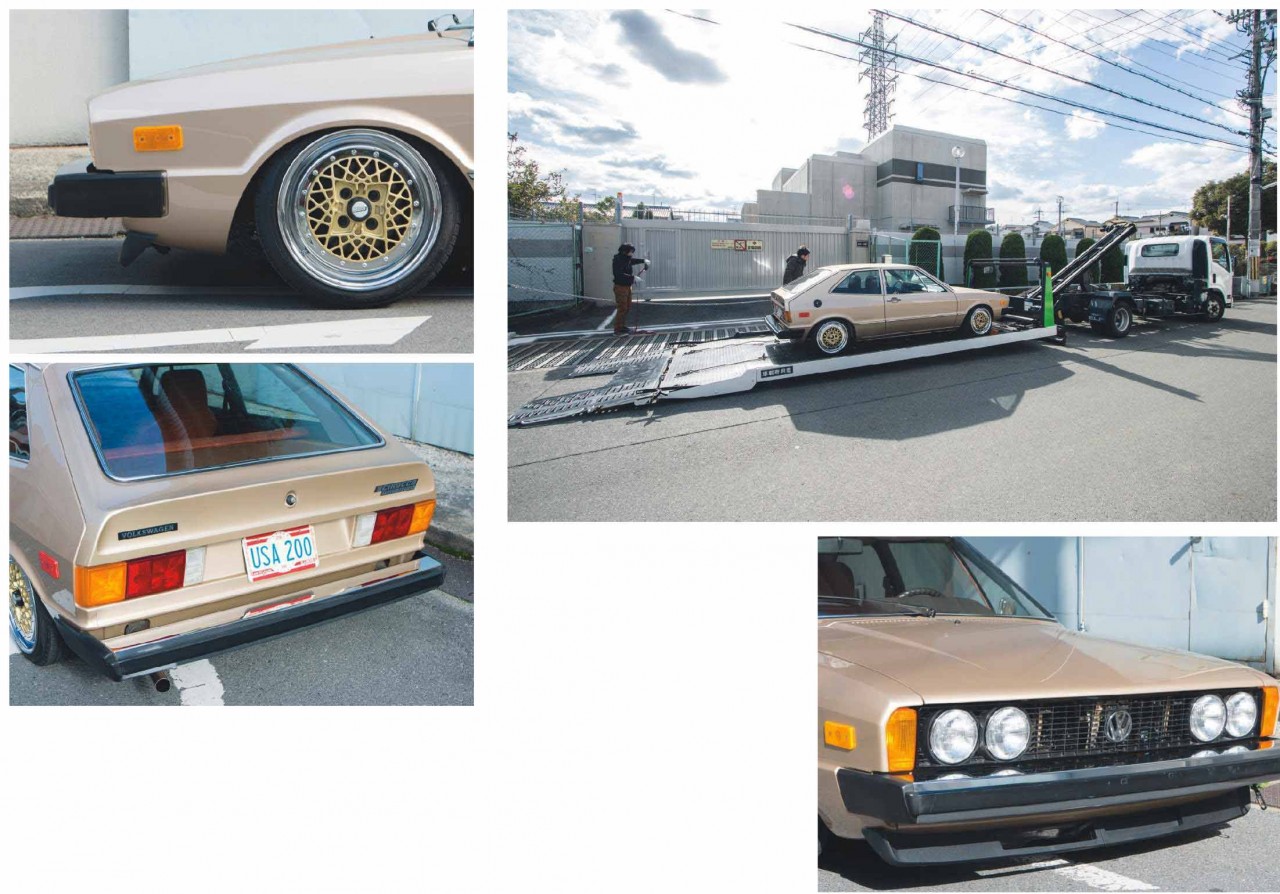 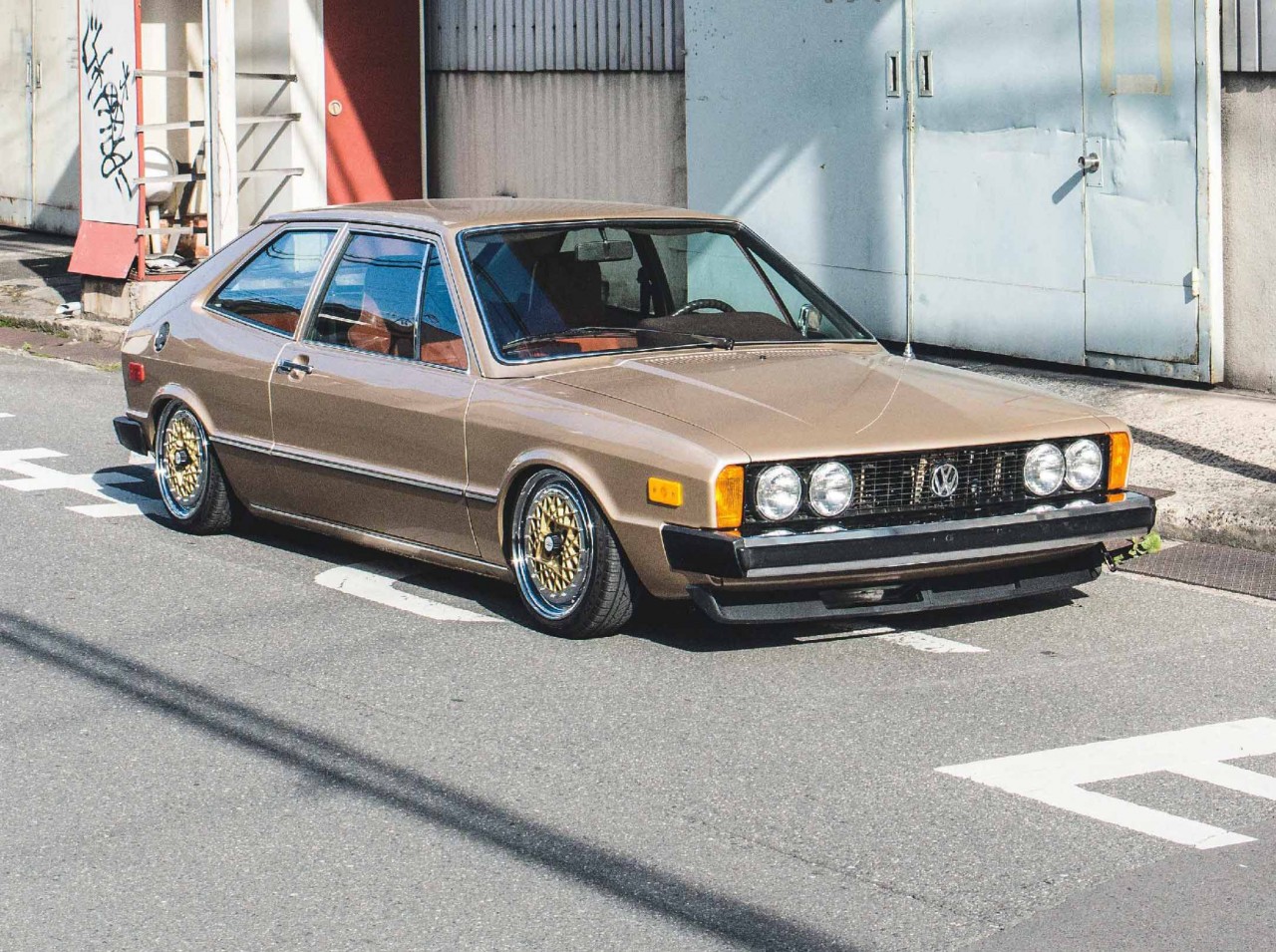 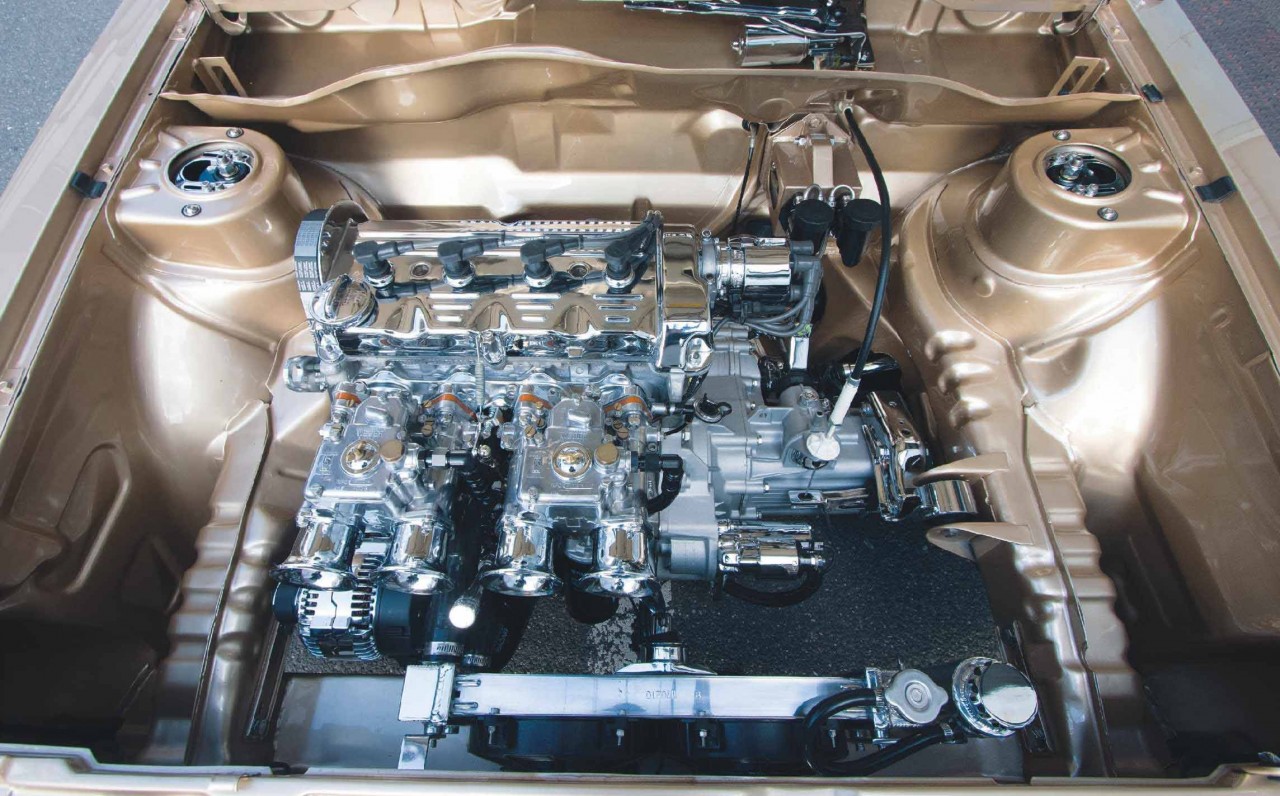 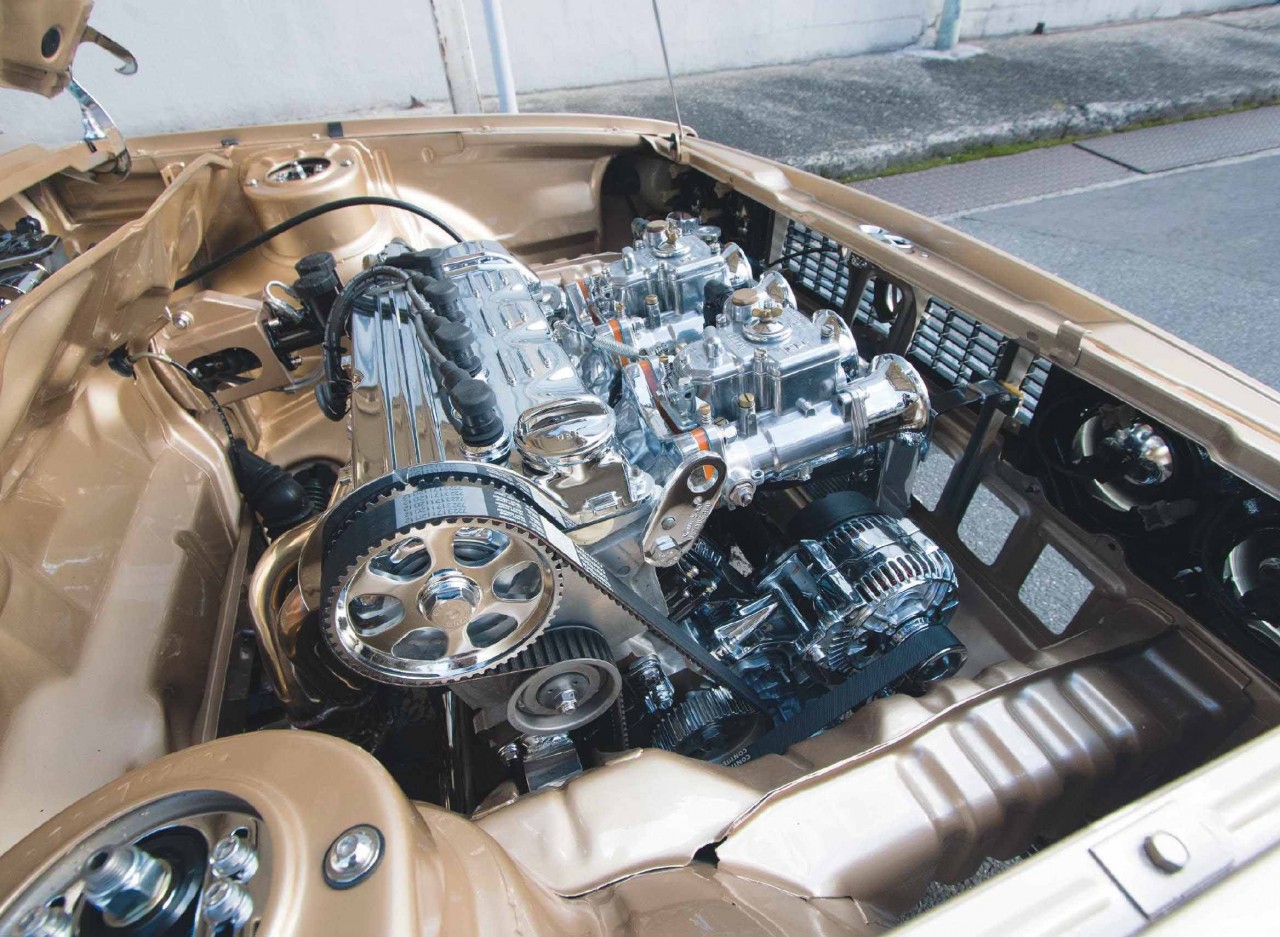 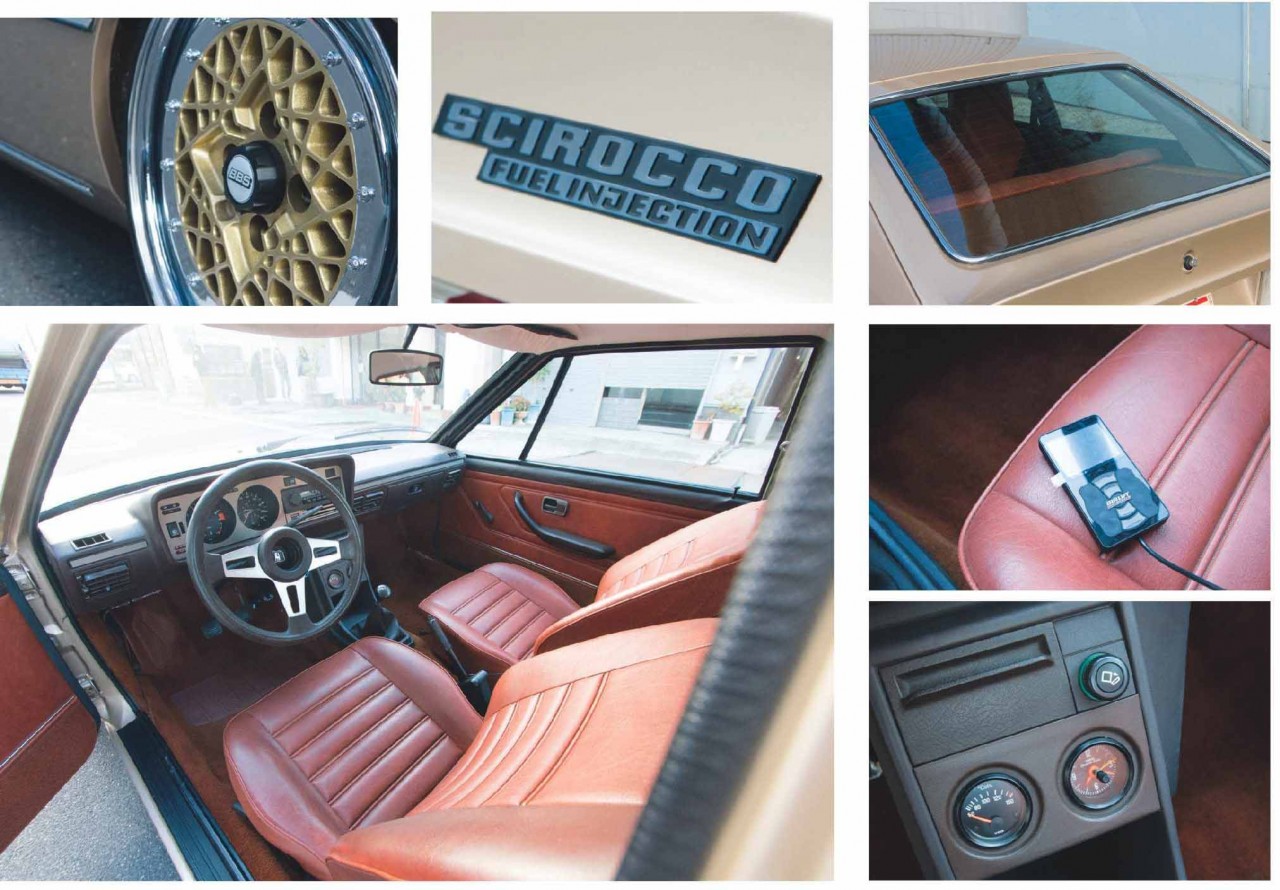