Muhab Shokat here, or Mo as his friends and work mates call him, puts his addiction to all things Veedub squarely on the foot of his older brothers, Ahed and Mahran. “They had quite a few cars when I was growing up in the 90s; E30s, Renault 5 GT Turbos and an XR3 at one point, but the ones I remember the most were the Mk2 Golf and Jetta they owned,” Mo explained. 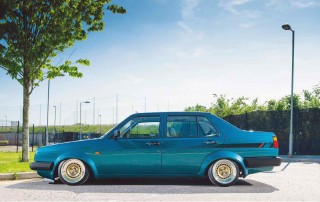 Things really took a turn for the worst (or better, depending on whether you consider a VW addiction a good thing or not – All) when Mo’s brothers started bringing home copies of Performance VW, which the younger Mo used to borrow. “It just opened up a whole new world to me reading PVW in the early 2000s,” Mo smiled, “from then on in I was just hooked on VWs and it’s something that’s never really gone away.”

Mo got his VW journey off to a flyer with a Mk2 Golf fulfilling the role as first car, the red 1.3-litre soon finding itself lowered on coilovers and wearing Audi ‘pepper pots’. Unfortunately, that car met an untimely end and with Mo needing a slightly more sensible car for work, a 6N2 Polo GTI was purchased in replacement. “I needed the car for work, to go and see clients in, so I couldn’t really modify it that much, but I could make it look better, as it was a bit of a rough one, so I re-sprayed it, refurbished the wheels and did little bits here and there like refurbishing the brake callipers,” he remembered. “The odd client, if they were in to cars, would remark that it was clean, which was nice, but it left me itching to properly modify a car again and soon enough I found myself looking at Mk2s again.”

Mo started his search and one night came across this 1990 Mk2 Jetta GX on eBay. “As soon as I saw it I knew I wanted a Jetta over a Golf, it reminded me of my brother’s old one. It’s funny, I remember back in the day preferring the Jetta to the more loved and common Golf. I’ve always liked the idea of modifying a car that people don’t often see modified, a car that was built to be a family run about, something you don’t expect to be modified or fast.” 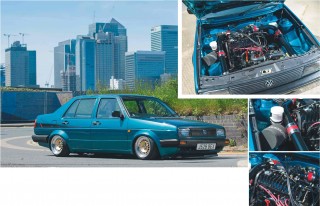 A one owner car all its life, this particular little family run about had worn its age well and was quickly put to daily use by Mo. Of course, it wasn’t going to remain standard for very long and it soon found itself sporting a set of coilovers and some wheels.

The longer Mo owned it, and as is so often the case with Mk2s or any older VW for that matter, the deeper he got in to the car and over time found more and more little areas of corrosion that needed attention sooner rather than later. Mo had already formed quite a bond with the booted second-gen and while the discovery of rot on a Mk2 is hardly a surprise, it was a discovery that set our man in to action.

As is so often the case again with older Veedubs it was this bond, not to mention the discovery of a few too many problem areas, that would eventually lead to the car being totally stripped back, restored and saved from rotting away to off-the-road status, something that probably wouldn’t have happened otherwise. Or as Mo puts it, “that’s when it went from a fun project I could drive daily to an all-out restoration and build.” Mo and his brothers set to work on the car, out on the street just as they had done back in the day when Mo used to watch them. It wasn’t just the working environment that was going to be like it was back in the day for the boys, Mo wanted the car to have the same vibe as the cars they used to read about and see at shows back in the day too, with a bit of a modern twist of course. “We’d just work on it till it got dark, put a cover over and it and come back the next day and start again,” Mo smiled. “Other than a visit from the council to tell us having it on axle-stands was unsafe and the trial and error and hassle of fitting the engine back in after we built it outside the car it was good, the whole family got involved with it, even my dad.” 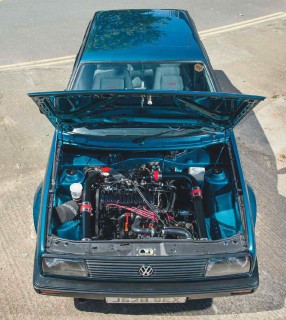 Originally a big bumper, Mo and his brothers first job was to swap the car to small bumper spec, welding up any holes left where the trim was removed and then deleting the rub strips from the doors, too. Then it was time for the more serious metalwork, tidying up the bay and flaring the arches approximately an inch all round, all in metal of course, because Mo wanted to give his old-school car a fat, old-school stance. The final job, and one of the few given over to a professional on this build, was to lay down the fresh Capri green, the car’s original hue and one that we’ve always loved on a Mk2 Jetta. “I know it sounds silly but my favourite part of the whole car are the one-piece rubber window surrounds that I imported from China, where the Mk2 Jetta is still made. It’s little things like that, stuff no one notices, that I enjoy the most about it now,” he smiled.

Another thing he enjoys, and we have no doubt anyone would for that matter, is the thoroughly old-school power plant up front, a G60 turbo. A rare setup back in the day, a G60 turbo is an even rarer one today with fewer and fewer decent G60 lumps kicking about, and the prospect of easy (yes, we know no engine swap is easy) 20v power much more attainable. “The reason for going for a G60 turbo?

Simple, the sound of an old school turbo with an external wastegate and screamer pipe, you can’t beat it,” said Mo. “Also, more power,” adding “the way the turbo comes on boost is really old-school, really laggy, you just feel like you’ve been hit from behind when it comes on, just how I wanted it,” he told us with a grin.

The Corrado-spec G60 was separated from its G-Lader and mated with a T3 turbo from, for extra bonus 90s points, a Sierra Cosworth. Braided oil lines taken from another fast Ford, this time a RS500, were also drafted in, as was a VR6 fuel pump, a BBM fuel rail and refurbished Saab red top injectors. The lump itself was cleaned, prepped and painted before being slotted back in between the Jetta’s A-pillars – not an easy job on the side of the road in anyone’s book – before being partnered with an uprated intercooler and radiator up front. Finally, the cooling and boost pipes were custom made to suit the setup, all of which were power-coated or painted black prior to being fitted.

With the engine in and running well thanks to a little ECU chip trickery, the next job for Mo and brothers Ahed and Mahran was to slot in the Recaro front seats and the rears he’d had trimmed in grey tweed by MJ Interiors, the go-to guy for retrim work on the 90s and 2000s UK VW scene and still at the top of his game today. The rest of the interior is largely OEM, save for the all-important boost gauge, Air Lift V2 pad and a Momo Prototipo wheel. 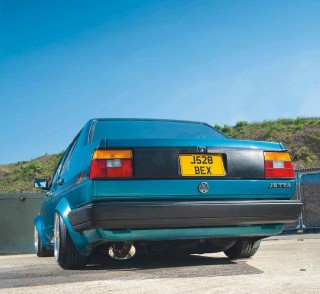 With everything underneath power-coated and poly-bushed, the only thing Mo had to do to the Mk2’s chassis was replace the old coilovers with a set of Air Lift struts, a decision that meant he could run the decidedly old-school wheel spec he wanted, a low-offset 8” and 9×14” set of Schmidt TH Lines, quite an old-school (but still super cool) wheel now dare we say it. The little wide wheels, with gold centres that complement the Capri green paint nicely, are wrapped in stretched 195/40s and tuck just behind the extended metal arches, giving the car the aforementioned wide old-school squat stance that really does it for us. And it does it for Mo too, well, the whole car does, as you might expect. “I wouldn’t change a thing, I’m extremely happy with how it came out,” Mo smiled. “One of my favourite moments with the car was when it won Best Interior and got a Top 10 water-cooled trophy at VW Action, that was pretty cool. The second was when an old lady walked up to me and asked if it was a Mk2 Jetta. I said it was and then she started laughing saying her old one wasn’t as nice as mine but she loved what I’d done, you know those stories you get. I always remember that moment as it was cool to see someone not interested in cars appreciate the work we’d put in,” he smiled. “You know I think people who look down on modified cars should remember that we’re not just modifying them, we’re often saving them from extinction too.”

We’re glad Mo did choose to save this particular Mk2 Jetta from one day ending up either Scrappage Schemed, parted out or sent to the crusher when age caught up with it, because the result of him and his two brother’s near seven years of effort is one of the sweetest Mk2 Jettas to come out of the UK in a long time. If you see Mo at a show coming up, check his Jetta out and stop to give him a pat on the back, he’s certainly earned it.

PEOPLE WHO LOOK DOWN ON MODIFIED CARS SHOULD REMEMBER THAT WE’RE NOT JUST MODIFYING THEM, WE’RE OFTEN SAVING THEM TOO 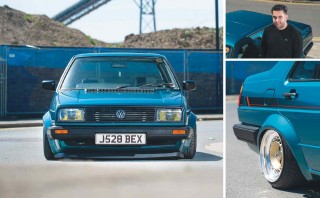 SHOUT: Thanks to my friends and family, especially my elder brothers Ahed and Mahran. Thanks to The Phirm, MJ Interiors, Y&A Body Repairs and A1 Alloys

The reason for going for a G60 turbo? Simple, the sound of an old school turbo with an external wastegate and screamer pipe, you just can’t beat it.

G60 turbo conversions were rare even back in the day. We can’t remember the last time we featured a car running one in the magazine. We’ve always had a soft spot for them, mind!