Survivor’s guide “New Era” Volkswagen Golf Mk1 – Living with the legendary Mk1 Volkswagen Golf.. Whether a lowly L or a sparkling GTI, the Mk1 Golf makes a practical modern classic. What’s it like to live with one? Words Paul Wager.

Today the word Golf is almost a byword for mundane but back in the ’70s when VW unveiled its first try at a frontdrive hatchback it made the world sit up and take notice. Yes, there had been front-drive cars before and many of them with a hatchback rear too, but the Golf with its pert Giugiaro-penned lines, reassuring VW build quality and a size which was just right – bigger than a Fiesta or Renault 5 but smaller than a Cortina – was the first to provide a complete package. Indeed, the market it created is now known for very good reason as the Golf segment.

In truth it was part luck and part desperation on VW’s part which saw the Golf take off. The firm had for decades been relying on essentially a single design, the rear-engined, air-cooled concept which had first seen life under the original Beetle.

The acquisition of Auto Union had given the firm access to modern front-wheel drive technology and the first result of a new thinking had been the original Passat in 1973, basically a hatchback Audi 80. It was well received but was a larger, more expensive car than the Beetle and VW management was painfully aware that a more modern volume seller would be needed as the Beetle started to look increasingly old-fashoned.

Various attempts at a modern mid-range car were tried, including a mixture of rear and front-engined designs and some even retaining air-cooling but the result which made it to production was thoroughly modern. Giorgetto Giugiaro again provided an elegant shape which had a family resemblance to his earlier Passat and the car was powered by the modern overhead-cam EA827 engine mounted transversely and driving the front wheels. By today’s standards the chassis was thoroughly conventional, with MacPherson strut front suspension and a twist-beam torsion bar rear axle but it gave the Golf a good ride quality and nimble handling with the front-drive layout providing failsafe understeer at the limit – a relief to all the Beetle owners who had been caught out by the older car’s swing-axle rear. The initial line-up consisted of a 1098cc, 50 bhp engine or a 70 bhp 1471cc motor, later replaced by the 1588cc, 75 bhp motor in September 1975, with a 1272cc option added in 1979. 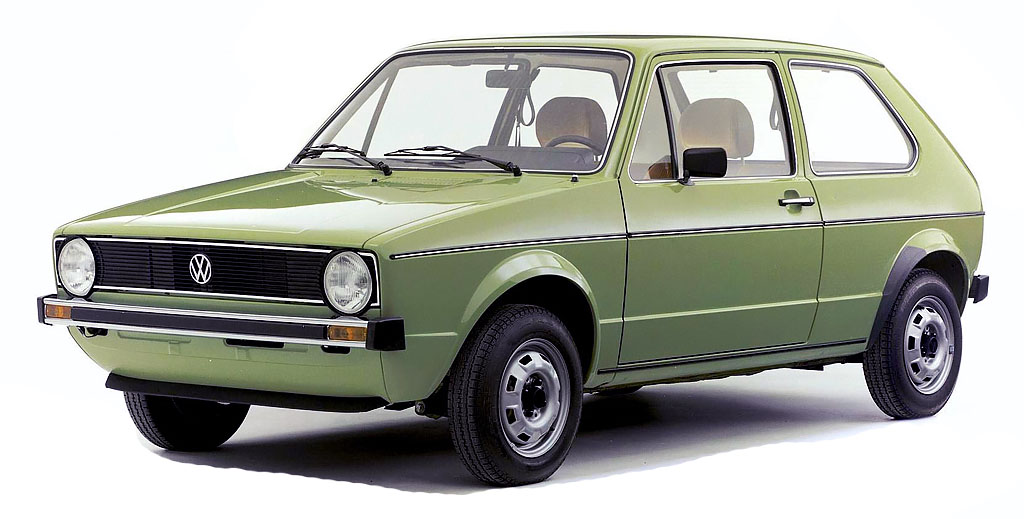 In 1500 and 1600 form, the Golf was acceptably brisk but the world of traditional sports cars was turned on its head in 1975 when the ‘Sport Golf’ was unveiled at the Frankfurt show. VW management’s reluctance to produce a sporting model of their vital new baby meant that the project had been a private after-hours development by a group of engineers using a discarded Scirocco prototype and a 100 bhp twin-carb 1600 engine. The prototype convinced the board to give the project the green light and with a 110 bhp fuel-injected version of the EA827 engine borrowed from the Audi 80 GTE, the Golf GTI was born. 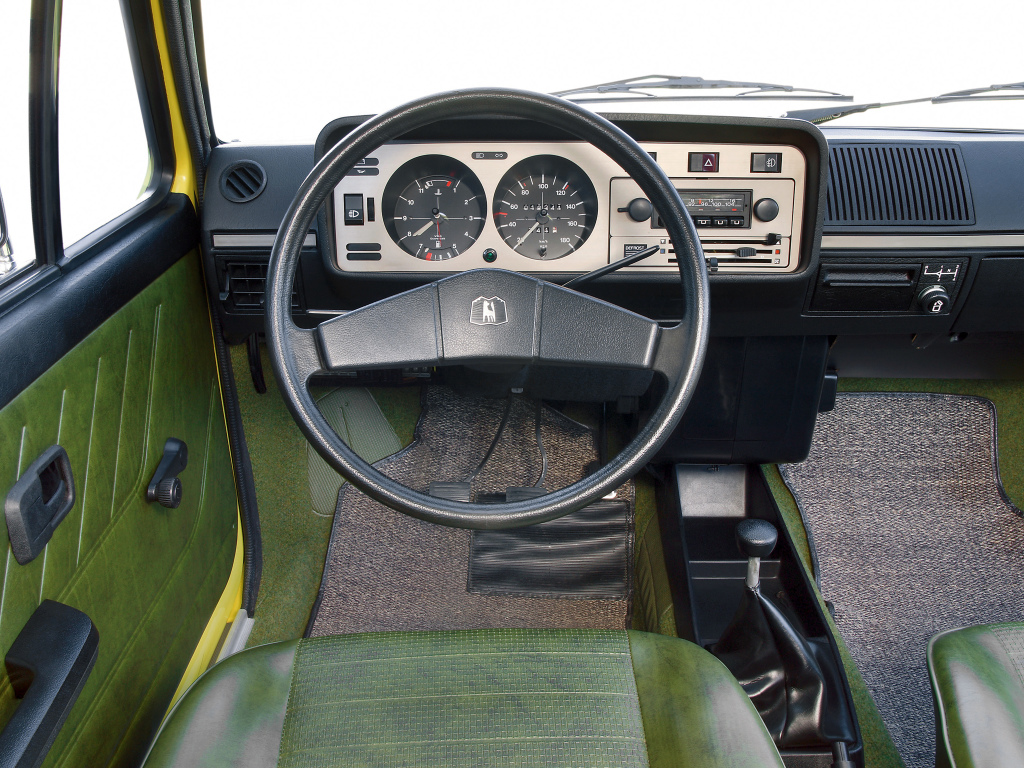 The fastest Volkswagen model ever by some margin, the Volkswagen Golf GTI Mk1 was quicker than many much more expensive cars of the day and in its first year sales were ten times the predicted volume. Meanwhile, in 1979 the Golf became a convertible – or rather, Cabriolet as it’s technically known on account of the prominent Stag-style roll hoop – and in 1976 the car gained diesel power. 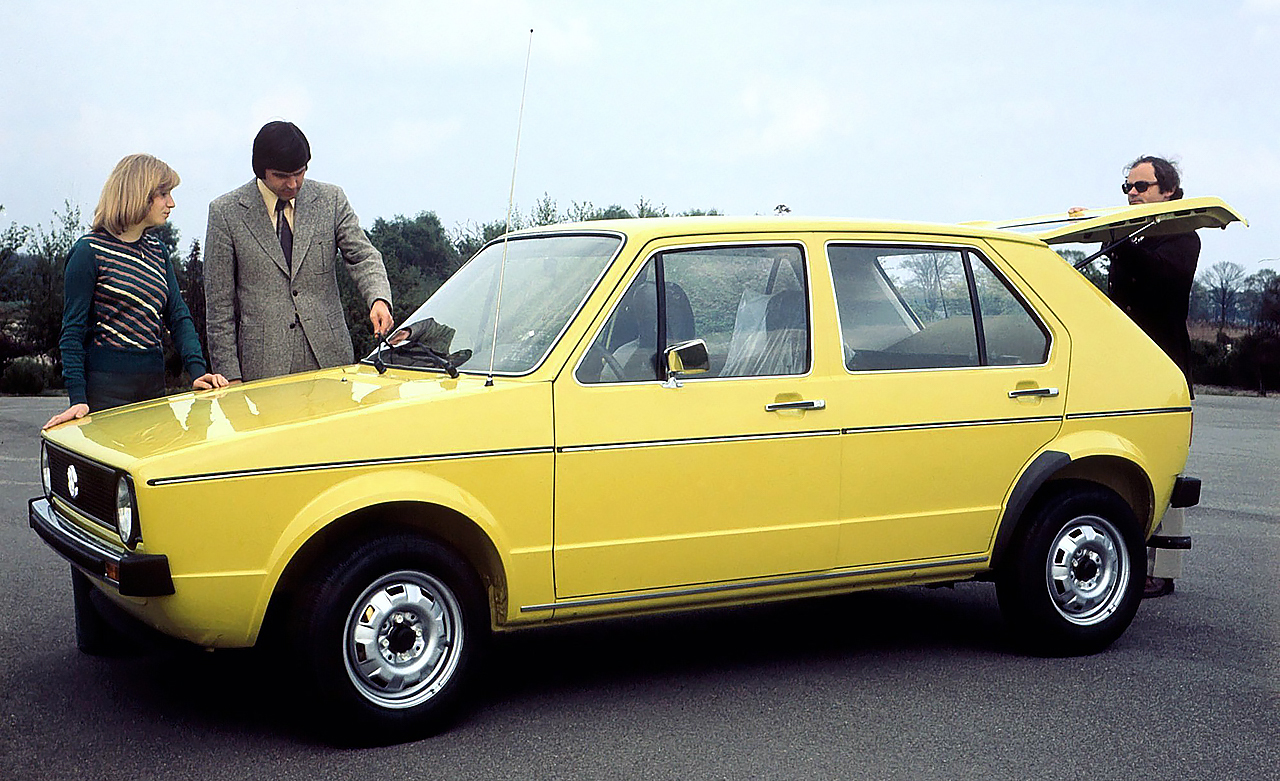 The GTI gained a 1781cc, 112 bhp engine in 1982, but apart from a minor facelift in 1980 which brought restyled tail lights, black plastic bumpers and a redesigned dashboard with more modern switchgear, the Golf remained pretty much unchanged until its end, which came in 1984. The VW Golf MkII which followed may have looked more modern but under the skin was merely a heavy facelift of the original, which tells you how ‘right’ the original design was. In fact an all-new Golf wouldn’t arrive until the Mk3 in 1992. The Mk1 in fact carried on in cabriolet form well after the demise of the hatchback. 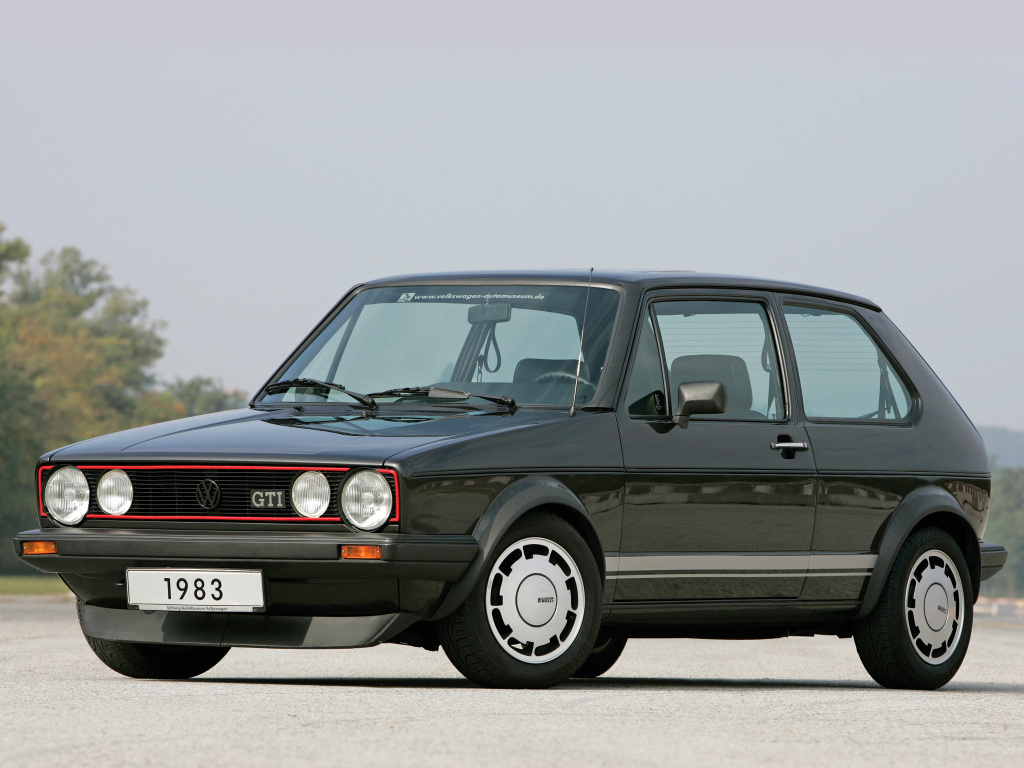 Today the Golf Mk1 is a pretty rare beast since despite VW’s boasts of durability they did like to rot and it’s the GTI which is the largest survivor, alongside the late-model Cabriolets. Look hard enough though and you can still find a handful of regular models and they’re an intriguing alternative to other ‘sensible’ classics like Morris Minors and they’ll certainly turn just as many heads. What though, is it like to live with the Mk1? 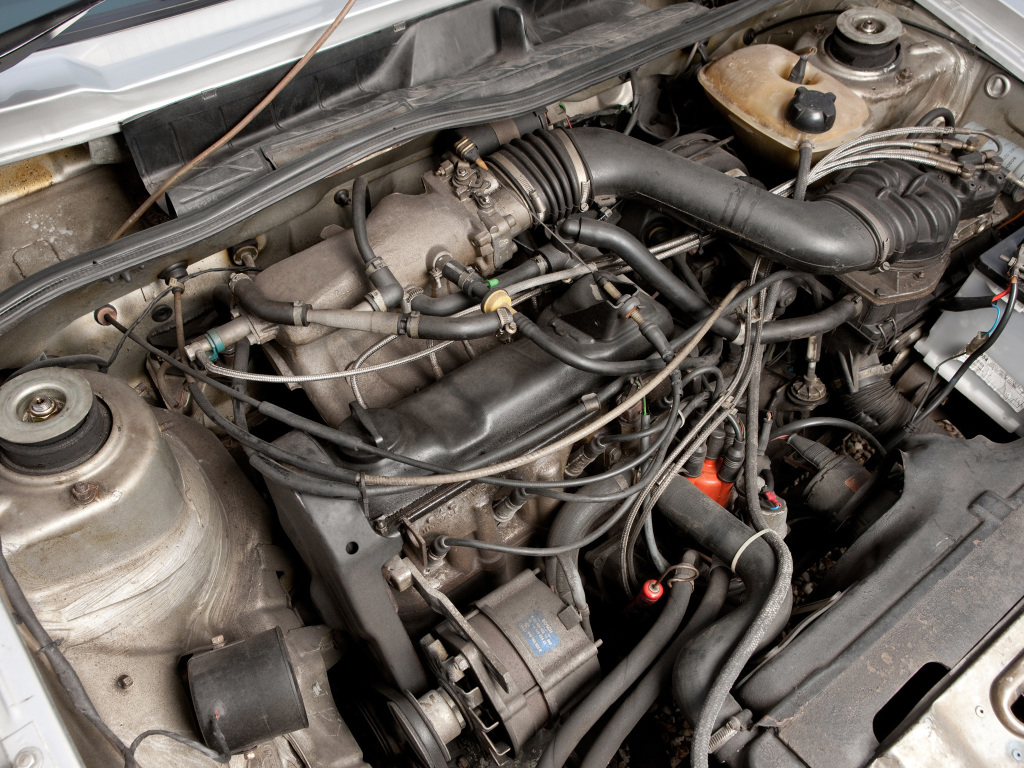 Early LS interior (above top) and the trademark checked GTI seats (above right). Injected 1800 motor was good for 112 bhp.

The Mk1 bodyshell lived on as the ‘Citi Golf’ until 2009 in South Africa.

Long before the Mk2 GTI gave us the 16V, famed VW tuner Oettinger produced its own 136 bhp twin-cam conversion which was sold though VW France as the 16S.

Jensen Button’s dad John was a familiar rallycross contender in the ’70s in a Mk1.

The Mk1 convertible was produced until 1992. There was no Mk2 Golf convertible.

VW of America produced the Golf as the Rabbit in an ex-Chrysler plant in Westmoreland, PA from 1979 to 1985. The sheetmetal was the same but the interior was ‘Americanised’… which killed its sales appeal.

The European Golf pickup, named Caddy, was produced in Sarajevo and was very different from the previous US-made version.

The ‘Formel E’ concept (Formula Economy) offered a ‘3+E’ gearbox with a high top gear and a dash light telling the driver when to change up.

The mechanically identical Scirocco was launched six months before the Golf to iron out any teething problems.

The cabriolet and the Scirocco were both produced for VW by Karmann.

The wings were notorious rot spots on the Mk1 even when they were relatively new, but less obvious corrosion can be found in the sills, inner arches and front/rear valances. One rust issue specific to the Golf is the fuel filler neck which can corrode out of sight and allow grot to drop into the fuel tank. Anything which passes through the filter can cause rough running, especially on the GTI where it affects the fuel metering unit of the K-Jetronic.

The scuttle area can also be an issue on the Mk1, while another Golf-specific issue is a split bulkhead where the clutch cable passes through. Prefabricated plates can be bought to sort the problem. A seriously rotten Golf was once an automatic scrap case but not so these days: VW Heritage can supply most of the exterior panels and the values of the GTI in particular now make it worth spending the money to save the car.

The engines are all essentially robust if they’ve been maintained but the VWs and Audis of this era did have a famous tendency for valve stem seal wear. The result is oil smoke on the overrun and although it can be lived with it’s something worth fixing. It’s reasonably straightforward DIY to get the head off and change the seals. These engines use a cam belt which needs changing every 40,000 miles, but in theory the engines are a ‘non-interference’ design which means a snapped belt will simply stop it running rather than break valves and pistons. Don’t rely on that being the case though as the tolerances involved are very tight.

Transmission output shaft seals can leak but it’s a straightforward if involved job to fix. Less easy to sort is a notchy and sometimes crunchy second gear, which can sometimes be eased by filling the box with modern synthetic oil but ultimately will mean just living with it or swapping the gearbox. Luckily, there are several interchange possibilities for the Mk1 box.

The brakes on the Mk1 were never its strong point. VW chose to keep the servo and master cylinder on the left of the engine bay on right-hand drive cars and use a cross-linkage to transfer. The effort from the pedal. This worked well enough when the cars were new but as time passes and the bushes in the linkage pivots wear, it all becomes a bit wooden and vague. The problem is more obvious in the faster GTI, but it’s definitely worth fitting uprated pads and ensuring the cross-linkage is working freely. If that’s still not done the job then various kits are available including a conversion to Audi S2 front callipers.

An increasing amount of trim is being remanufactured these days, with firms like VW Heritage able to supply carpets and door cards, as well as the seat bolsters which commonly break up. The firm can also supply the GTI-style seat fabric off the roll.

As for the rest of the interior, there are plenty of used parts around, since so much of the switchgear and other plastic items was used elsewhere in the VW range.

Water leaks were a VW bugbear in the ’80s and specialists can supply new rubbers to help cure the problem. Sunroof cars are notorious for water leaks so check the drain tubes are all attached and working.

it’s a conventional set-up and pretty much all the parts you might need are available from bushes to complete spring and damper upgrade kits. Rattling front strut top mounts on poor surfaces is a typical trait of VWs from this era but is easily fixed if it becomes too annoying to live with.