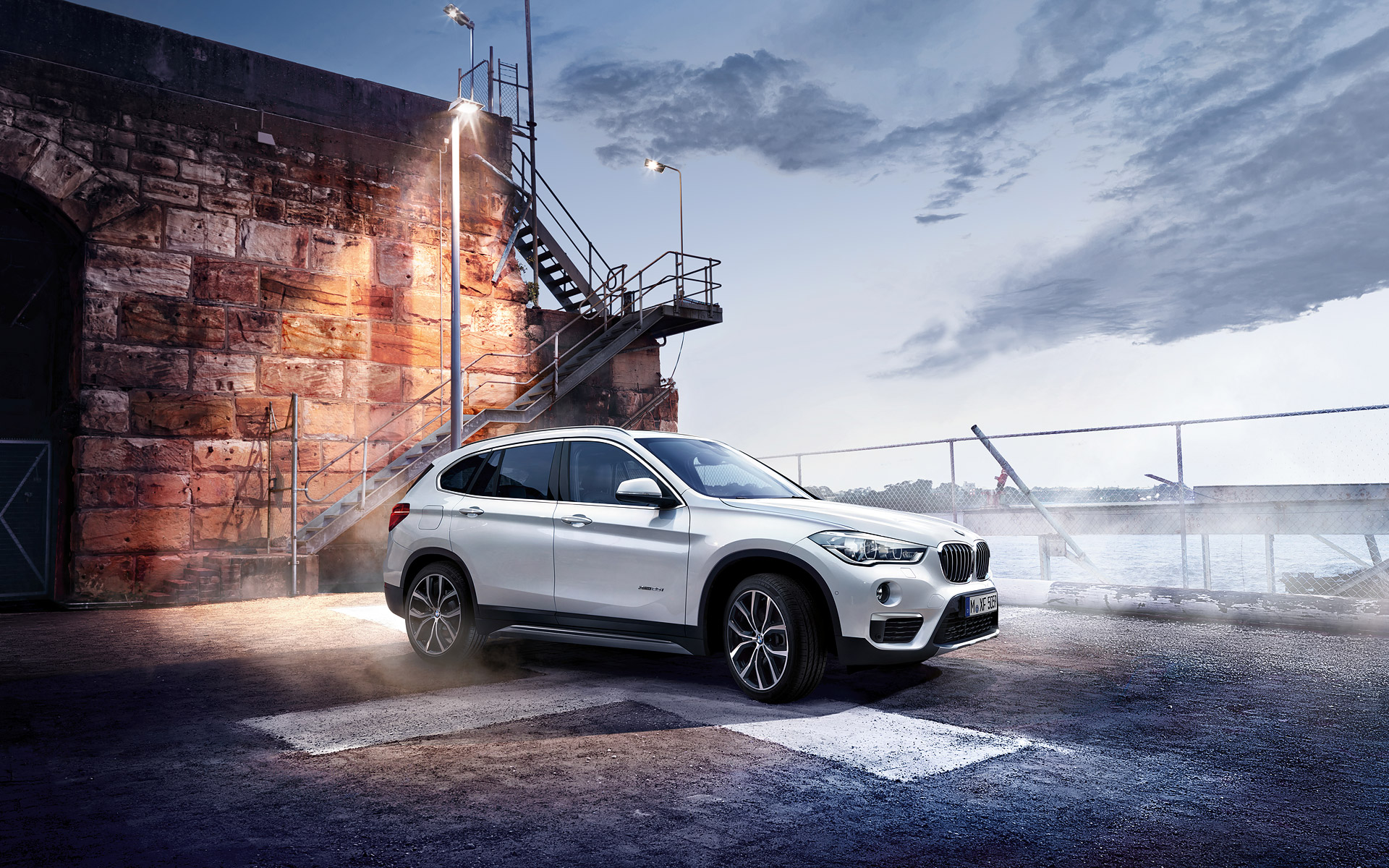 The burgeoning onslaught of new BMW models shows no sign of abating with the reveal of the second generation X1 a scant six years since the original was unveiled back early in the summer of 2009. In that time the X1 has been a huge success for BMW, selling very nearly three quarters of a million examples worldwide (with 40,000 of those in the UK), and with the new model BMW is aiming to capitalise on, and eclipse, those sales figures. As ever BMW reckons its new baby is better in every respect than its predecessor with improved interior space, better performance and increased efficiency. 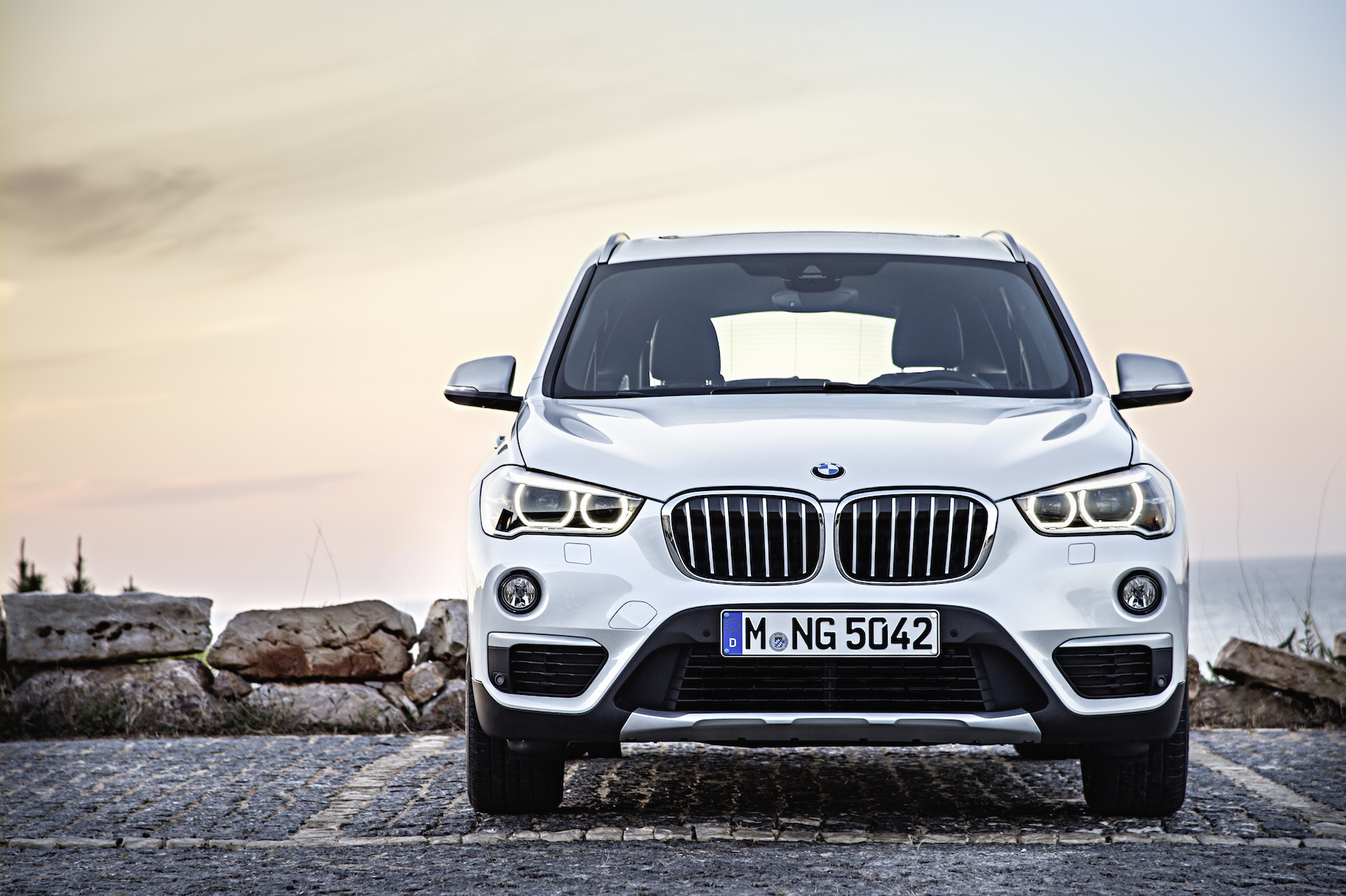 The new X1 is a departure for a small- to medium-sized X-generation BMW in that it’s not based on the 3 Series chassis which has been the case with the original X1 and both generations of X3. In a fairly major departure for BMW the new X1 is actually based on the front-wheel drive 2 Series Active Tourer and shares that model’s wheelbase and front and rear track dimensions as well as its transverse engine installation. The X1 will exclusively use a range of four-cylinder engines in both petrol and diesel guises and while there’s been no announcement yet, you could probably bet your bottom dollar that some form of hybrid will be on offer in the coming years, too. 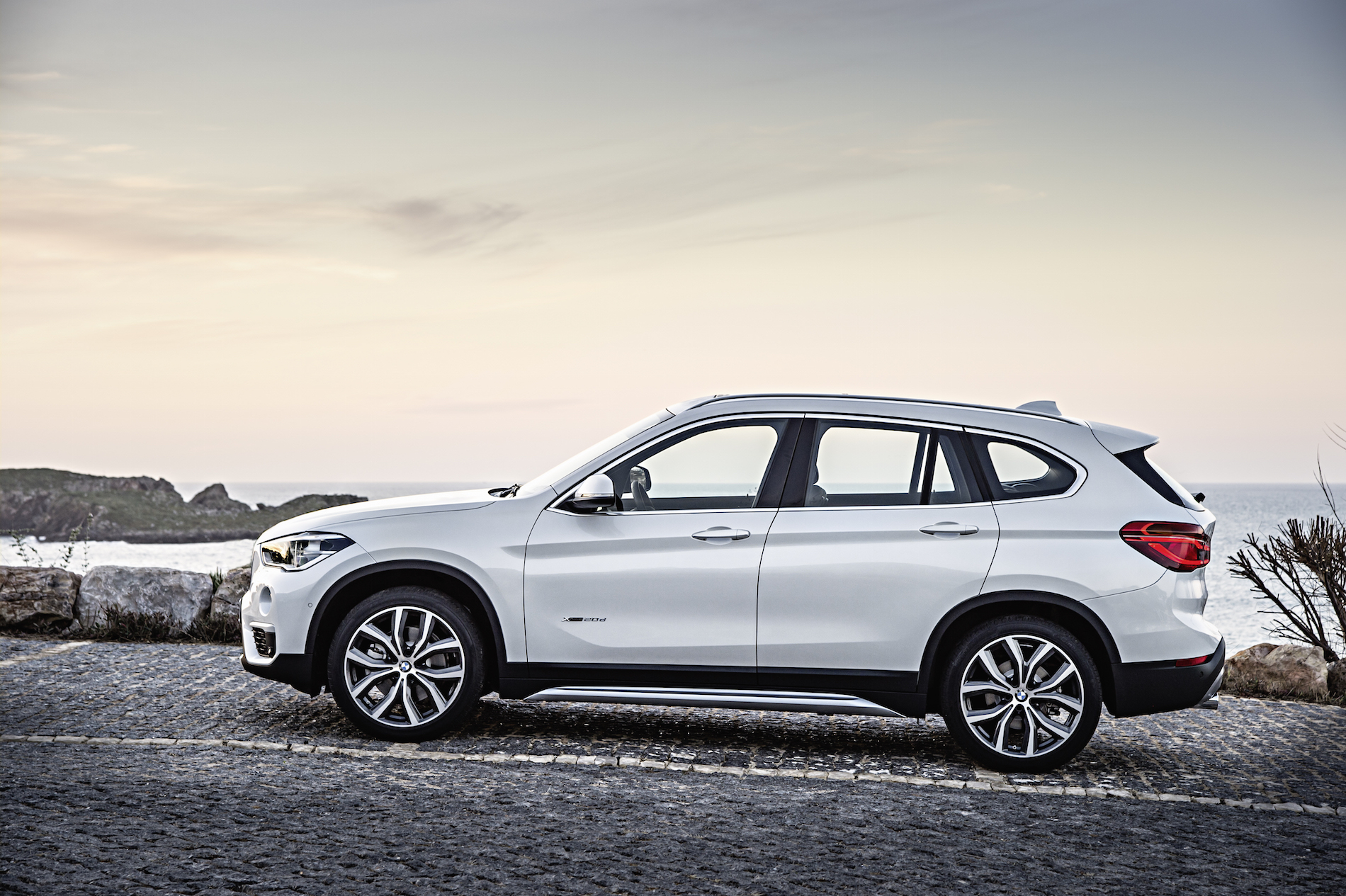 We won’t get carried away with describing the car’s exterior looks as you can judge how it looks for yourselves, but it appears to be quite a skilful blend of typical BMW X DNA with some of the design cues from the Active Tourer. In terms of exterior dimensions the new X1’s largest gain is in height – it’s 53mm taller than the current car – but at 1821mm wide it’s only 23mm wider than the E84 generation machine. Perhaps most surprisingly, the new X1 is 15mm shorter than the outgoing model but, despite this, the packaging benefits brought about by its transverse engine layout mean that BMW reckon it offers more interior accommodation and more luggage space, too.

Four different engines will be offered to UK buyers – one petrol, the BMW F48 xDrive20i – and three diesels in 18d, 20d and 25d guises. In other markets an xDrive25i will also be offered and it’s likely that after the initial launch process, further models will also be introduced, such as an EfficientDynamics model which has proved popular with company car drivers. The xDrive 20i is powered by the new 192hp turbocharged four-cylinder unit which generates 207lb ft of torque at just 1250rpm. The engine will be mated in the UK market to the eight-speed automatic transmission as a standard fitment and performance and economy look to be pretty decent with the 0-62mph dash taking just 7.4 seconds while economy and emissions are officially rated at 44.8mpg and 146g/km respectively. 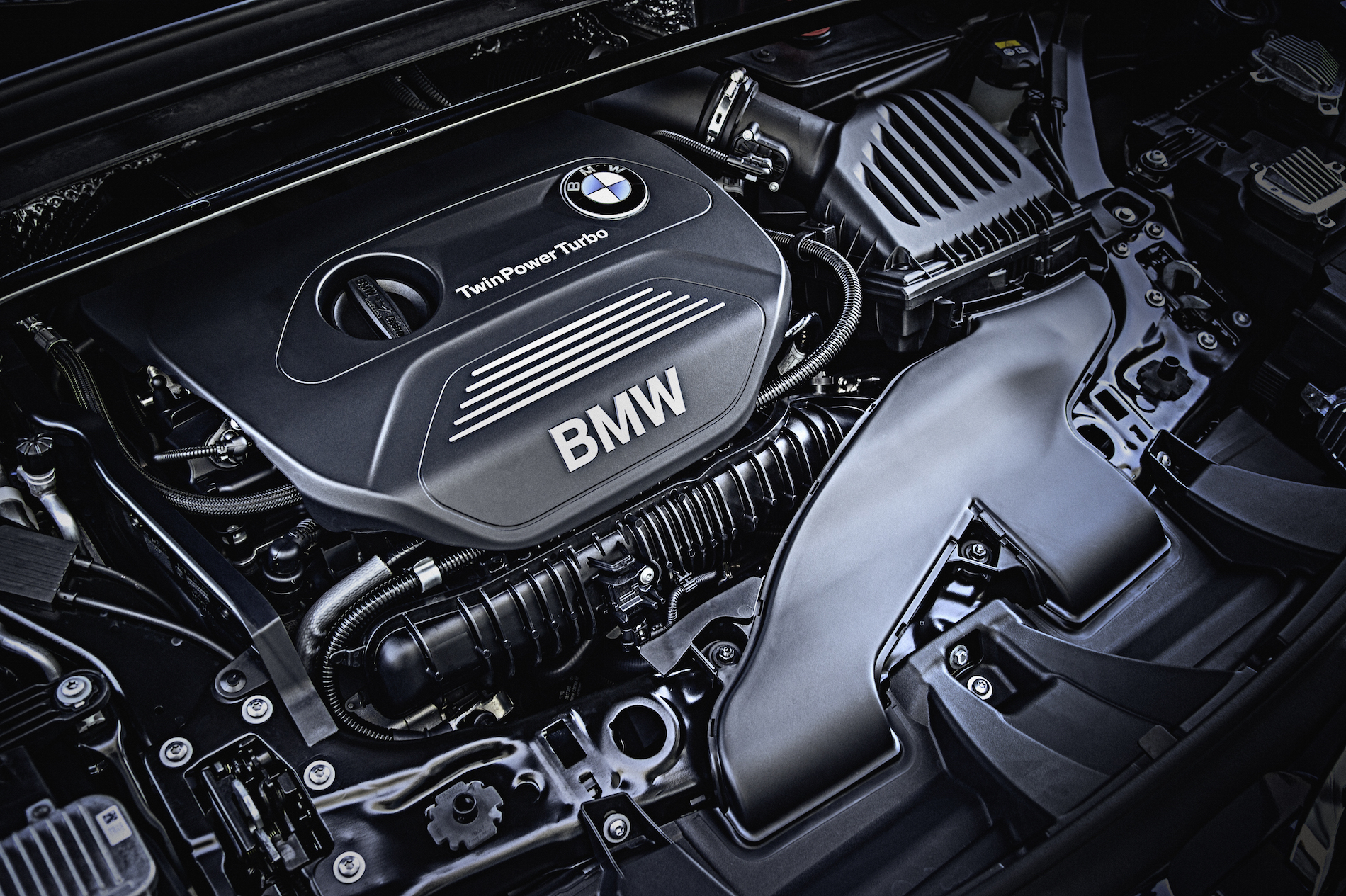 The three diesel engines on offer are from BMW’s new ‘B’ series of units that feature common rail direct injection with solenoid valve injectors and if our experience with these units in other new models is anything to go by they will be significantly more refined than the ones fitted to the current car. Top dog in the UK line-up will be the xDrive25d offering 231hp and 332lb ft of torque, which will equate to a 6.6 second 0-62mph time with 56.5mpg and CO² emissions of 132g/km. It will be equipped with the eight-speed automatic ‘box as standard. The xDrive20d uses the now familiar 190hp version of the B47 unit with 295lb ft of torque available from 1750rpm. It offers an excellent blend of performance and economy with 0-62mph taking 7.6 seconds while posting combined figures of 57.6mpg and 128g/km. These figures are for the eight-speed auto with which the car will be launched but a six-speed manual version will be introduced later in the year. 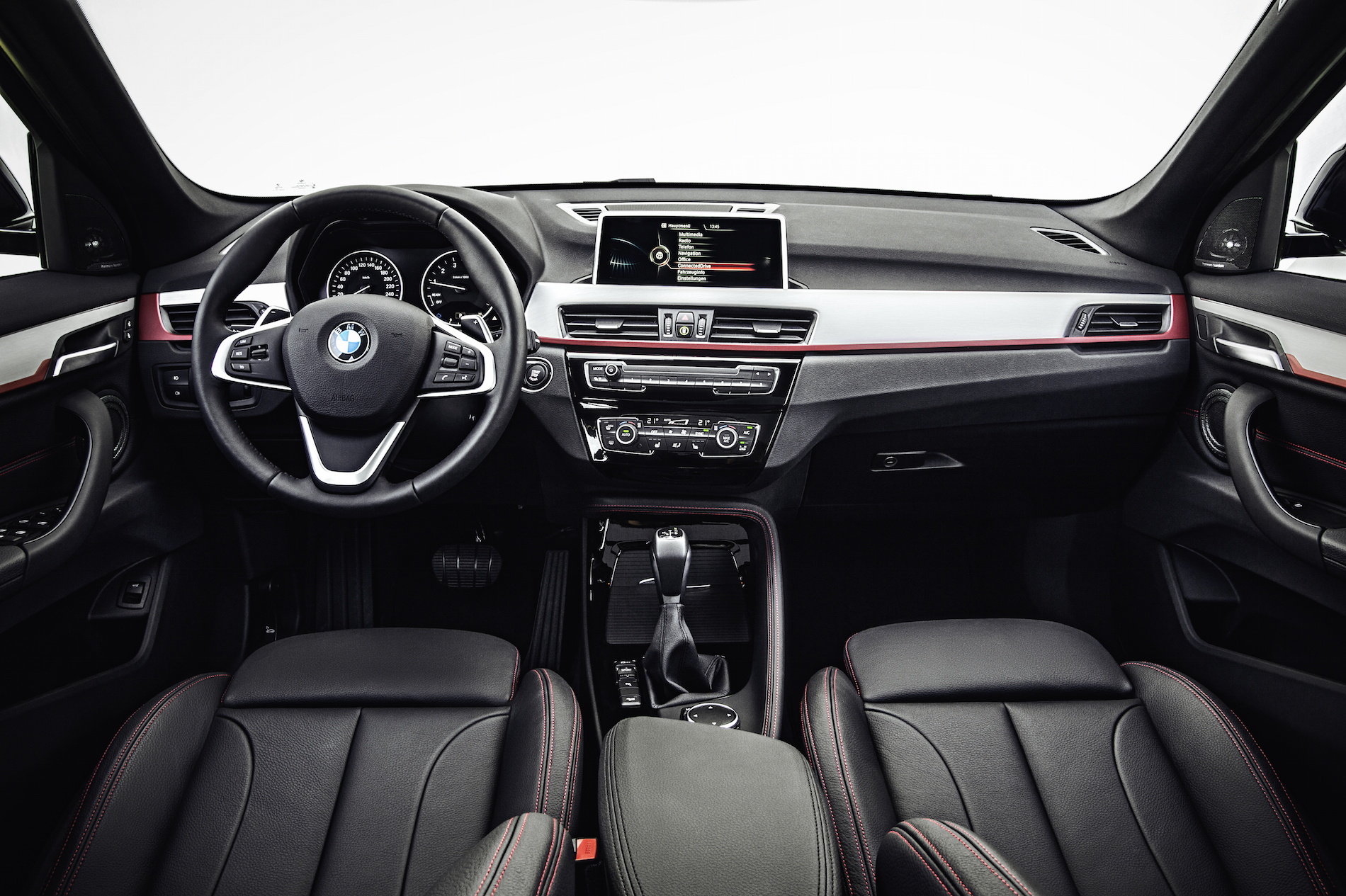 The interior generally seems to exude a feeling of quality which is definitely a step in the right direction.

The baby of the range for the UK’s diesel line-up will be the sDrive18d and, in a first for a BMW X machine, this one will feature front-wheel drive. Power and torque are rated at 150hp and 243lb ft respectively and with its standard six-speed manual ‘box it will return figures of 9.2 seconds for the 0-62mph sprint and economy and emissions of an impressive 68.9mpg and 109g/km. An xDrive version of the 18d will also be launched later in the year.

Under the new X1’s skin as well as the new engines you’ll find an updated xDrive system as utilised on the 2 Series Active Tourer. The system consists of a single-speed bevel gear in the front-axle drive unit (a power take-off), and a rear-axle drive unit with an electro-hydraulically controlled hang-on multi-plate clutch. The DSC system keeps the control unit constantly supplied with important data for analysing the driving situation, including the car’s speed, lateral and longitudinal acceleration, steering lock, wheel speed, pitch, accelerator position and the Driving Experience Control and DSC settings.

As you’d expect the new X1’s chassis setup has been altered from the previous generation machine to take into account the car’s front-wheel drive origins and, as a result, it now comprises single-joint strut suspension at the front and a multi-link rear axle. Aluminium swivel bearings, as well as axle carriers and control arms made from high-strength steel, help to reduce weight and increase the rigidity of the front axle, and the rear axle also employs a high proportion of high-strength steels. Tube-shaped anti-roll bars at the front and rear axle, innovative axle mounting and specially tuned elastokinematics contribute to agility and ride comfort, as do the connection of the dampers to the body via sophisticated three-way support mounts. As the original X1’s ride quality was perhaps its only major failing it will be particularly interesting to see the gains BMW has made in this area once we come to sample the car. For the first time on the X1 the adjustable dampers will also make an appearance as an option while the M Sport model will feature a firmer spring and damper setup as well as a 10mm lower ride height.

While we haven’t yet been able to see the car in the flesh it would seem that some of the greatest strides over the first generation X1 have been made inside the new model. The interior of the E84 was certainly looking its age and for the new model BMW has drawn inspiration from the Active Tourer and it looks so much better for it. There’s the modern interpretation of the BMW dash with the floating iDrive monitor (standard with a 6.5-inch display, 8.8-inch optional) and the interior generally seems to exude a feeling of quality which is definitely a step in the right direction. Despite the car not increasingly significantly in overall dimensions BMW says that there is an additional 36mm of knee room for rear seat passengers and if the optional sliding rear seats are spec’d then this can increase to an extra 66mm. The height of the seats from the ground has also increased with the front seats being 36mm higher and the rears 64mm and the new model also features improved head, shoulder and elbow room, too. The boot has increased in size, too, with a 505-litre capacity which is 85-litres more than the old model – fully fold the seats down and there’s an impressive 1550-litres of carrying capacity.

For the UK market there will be four trim levels: standard, Sport, xLine and M Sport. Standard spec includes cloth seat surfaces in an Anthracite/Black combination, and interior trim strips in Oxide, Silver or dark matt with accent strips in high-gloss Black. Dakota leather trim in Black or Canberra beige can be ordered as an option, as can interior trim strips in fine-wood matt Oak Grain and Fineline Stream.

The xLine model features a BMW kidney grille with bars that are matt aluminium at the front, with matt silver accents for the air intakes, side skirts and underbody protection. The interior trim comprises Dakota leather with perforated and contrast stitching, available in Mocha, Oyster, Black or Canberra beige with black accents and interior trim strips in high-gloss Black with accent strips in Pearl Gloss Chrome. This pack also benefits from LED headlights and heated front seats. 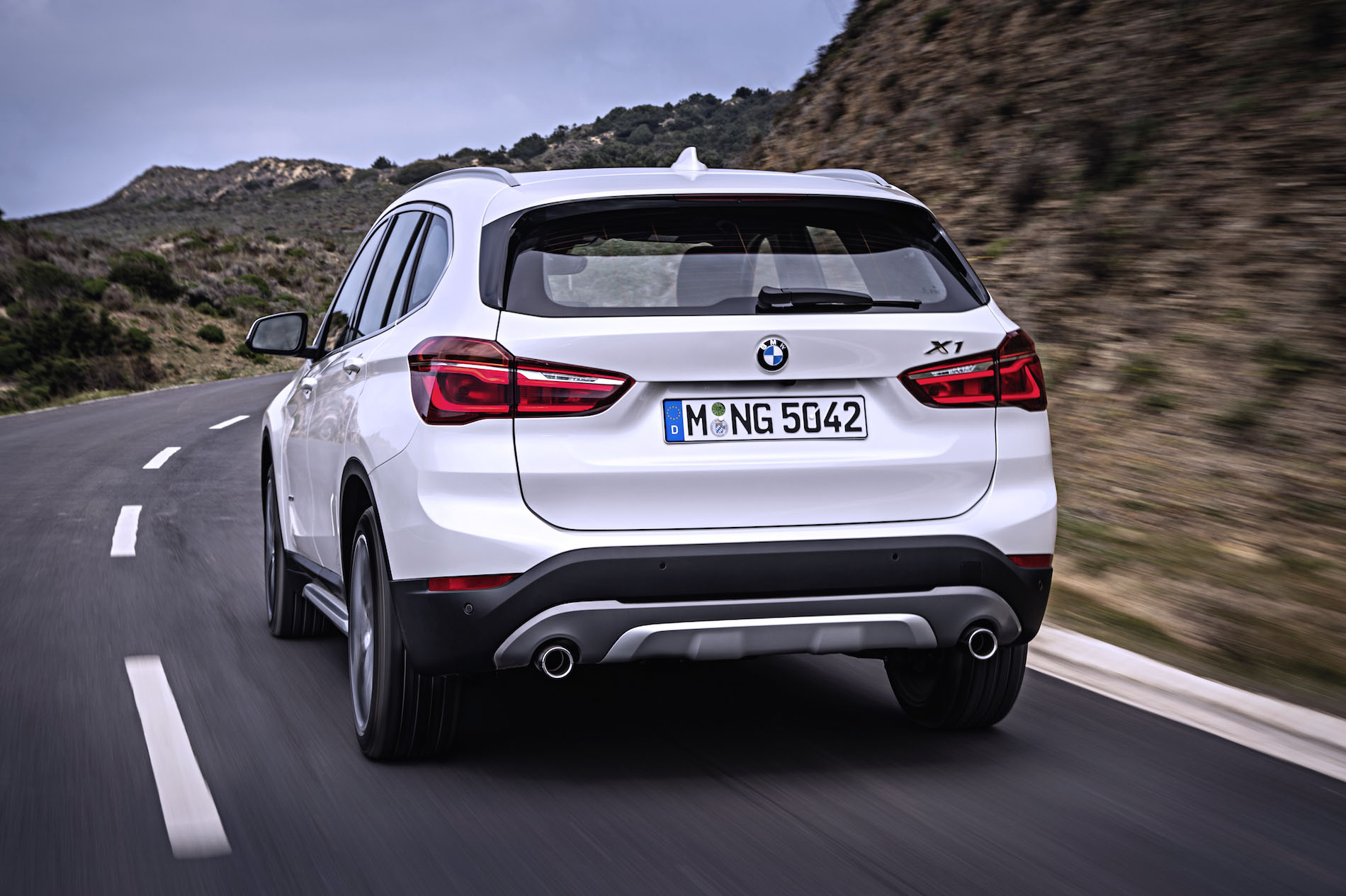 The Sport Line model features black BMW kidney grille bars, air intakes with accents in high-gloss Black and underbody protection in Black Silver with an inlay painted – like the side skirts – in body colour. The interior of the Sport Line model features black sports seats with either red or grey accents, and interior trim strips in high-gloss black or aluminium with accent strips in matt Coral red.

Overall the new X1 looks to take a large step forward over its predecessor. To our eyes it looks more stylish, offers improved performance, refinement and economy and, perhaps most important of all, brings a higher quality interior and the promise of an improved ride quality. The new X1 will go on sale on 24 October this year with prices to be announced closer to its market launch.

Sport version of the X1 features similar trim strips as found in the rest of the range, shown here in Coral red. Interior looks far more modern than the old X1’s and fixtures should be of a higher quality. Petrol engine will be offered as a 20i in UK.

Both interior space and luggage carrying capacity are said to be improved in the new X1 despite the exterior dimensions being virtually identical to the old model. Styling is improved with a more cohesive look than the outgoing machine.