When the 1M was launched it became an overnight success; people loved the power, the pumped-up styling and the rawness that made it feel like a decidedly old-school performance machine. The fact that it was a limited production model gave it that all-important element of exclusivity and people went wild for it; all 450 UK models were sold in the blink of an eye and nowadays, while the highest mileage examples start at a shade over £30k, the lowest mileage cars are up for £60k, sometimes even more.{module Autoads}

Clearly the ferocious 1 Series has lost none of its appeal and people are willing to pay top dollar for one of these wild little machines. BMW was clearly onto a good thing so, when 1 Series Coupé became 2 Series, the appearance of a 2M was inevitable and when it did finally appear it definitely didn’t disappoint. While the new machine has lost some of the raw appeal of the original and it is no longer a limited-run special it is arguably a better all-rounder. It also looks utterly fantastic, is incredible to drive and the performance is awesome, resulting in what many consider to be one of the best M cars ever made. Used M2s are barely £10k cheaper than a brand-new example, so with values strong it’s clearly got future classic written all over it. Who in their right mind, then, would take such a finely-balanced and highly-revered M car, gut it, stick an American V8 under the bonnet and then taking it drifting? What kind of lunatic would do something like that? Well, we’re about to find out… 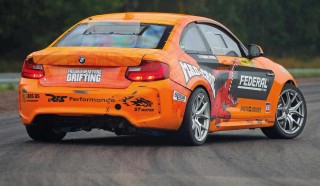 Fredrik Myhre likes BMWs, he likes modding and he likes drifting so that goes some way to explaining what you are seeing here. But, where most people who want to combine those three things would hit their country’s equivalent of Autotrader or jump onto eBay and find the cheapest, skankiest-looking BM that they could turn into a drift slag, Fredrik did things a little differently. “I just love the shape of the car,” enthuses Fredrik, “it was not a car that everyone had for drifting and I really liked it so I decided to buy one and turn it into a drift car,” he grins, and it really was as simple as that. He marched into his local BMW dealer, ordered himself a brand-new M2 and, when it arrived, proceeded to take it to pieces, undoing all of BMW’s carefully-crafted work in mere moments, and then went ham on it. The amount of work that has gone into this machine is insane.

Now, one of the most important things that your drift car needs is power, because more power makes it that much easier to get it sideways and then keep it sideways for as long as physically possible. With 370hp out of the box, the M2 isn’t exactly short on shove and with an N55 under the bonnet it’s very easy to extract some seriously impressive numbers from it, especially with the addition of a bigger turbo, but that wasn’t going to do for Fredrik. 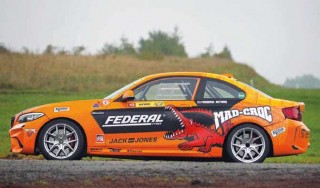 He wanted a lot of power and the best way to get that is start with a massive engine that’s pretty unstressed so you can push it hard, already makes a tonne of power so you have a good starting point, and is easy to mod with a huge aftermarket support network. Like it or not, if you want all that then you really need to go shopping in the States, because they know a thing or two about building big, reliable engines that can make big, reliable power. Under the bonnet of this M2 you will now find an LSX376: that would be a cast-iron, Gen IV small-block Chevy V8 and 376 is the displacement in cubic inches, which equates to 6.2-litres, so a reasonable size… Out of the box – quite literally, as it’s available to order as a crate engine – it makes a not unreasonable 476hp along with 475lb ft of torque, so you’re off to a pretty great start right there.

In a car as small and light as the M2 that would be enough for most people and, you might think, surely enough for the task of going sideways? But you’d be wrong. Having acquired his LSX V8, Fredrik then proceeded to add two turbos to it, because that’s obviously what any sane person would do, and he has opted for a pair of Precision 6266s, each one rated to 735hp… 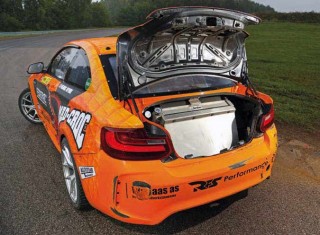 They have been joined by Tial wastegates, massive 2200cc ID injectors akin to having eight garden hoses pouring fuel into the cylinders, custom exhaust manifolds and Autronic SM4 engine management to keep everything under control. The end result is an astonishing 840hp and 863lb ft of torque at the hubs, which would be even higher at the wheels, so you’re looking at over 1000hp and 1000lb ft at the crank. We’d say that’s enough. As you can see, the engine bay is absolutely stuffed full of V8, so much so that there’s no room for a rad but that’s not necessarily a problem; drift cars spend so much time going sideways that traditional, front-mount radiators are often incapable of providing adequate cooling. To solve the problem of packaging and inadequate airflow in one go, Fredrik has installed a hefty rad in the boot which takes in cool air through a scoop in the perspex rear window, aided by the pair of pull-through fans and the under-car vent that allows the hot air to escape, pulled away by the air rushing under the car.

So, you’ve got your 1000hp, twin-turbo V8 stuffed into the engine bay of your M2 and your next challenge is getting all that power and all that torque to the rear wheels and onto the tarmac. It’s always torque that’s the transmission killer so Fredrik was in need of a seriously beefy gearbox to go with his engine and the Samsonas five-speed sequential ’box he’s fitted is definitely tough enough for the task at hand, offering instant shifts and perfect for his drifting needs. On track, Fredrik needs to make sure that his M2’s front end will point exactly where he wants it to point while the rear end needs to be able to transfer at least some of all that power and torque to the tarmac in a straight line for a bit, before all hell breaks loose, so the right wheel and tyre setup is essential. He’s gone for a square setup, with 10×18” AC Wheels flow formed FF007s all-round with 265/35 Federal RSR tyres front and rear, ensuring he gets masses of front-end grip to be able to change direction instantly and enough rubber at the rear to be able to put some of that power down when he needs to. 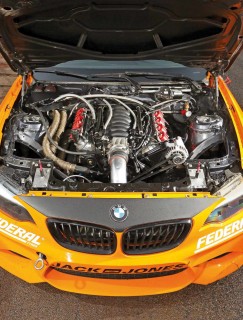 The brakes have also been uprated for additional stopping power and on the suspension front Fredrik is running top-end, Nitron remote-reservoir three way coilovers, offering a vast range of adjustment, perfect for obtaining the ideal setup at every event.

Where you might expect to see a drift car covered in all sorts of scoops and wings, Fredrik’s M2 has been left completely stock on the outside, bar the addition of lightweight windows, but as it is an M2 that’s no bad thing and, covered in the wild orange colour scheme of his Mad Croc energy drink sponsor, it looks pretty spectacular. The interior, on the other hand, bears almost no resemblance to the original M2 cabin, with everything recognisable having been unceremoniously stripped-out and replaced with exactly the kind of full-on race setup you’d expect to find in a competitive drift car. First of all, there’s a full FIA-approved roll-cage, with a rear closeout that covers the rear cabin area and blocks off the rad from the cabin. A pair of Sparco Ergo seats, with removable head bolsters to allow Fredrik to see where he’s going once sideways, have been installed with matching Sparco five-point harnesses. There are lightweight carbon door cards, a QSP steering wheel, a Racepak digital dash display, dual Zeitronix digital wideband AFR gauges, a digital gear indicator, Wilwood pedals and an RFS Performance CNC hydraulic handbrake. There’s some seriously high-end gear in here, but you don’t win at motorsport by counting pennies and cutting corners, so it’s no surprise that Fredrik has gone all-out in here, as he has done at every stage of this build.

This is a mental build and no mistake but that makes us love it even more. We love the fact that Fredrik decided the perfect candidate for drifting was an M2 and that he had no qualms about taking a brand new one and pulling it to pieces.

The fact that he decided to stuff a Yank V8 under the bonnet is certainly likely to ruffle a few more feathers but he didn’t build this beast of an M2 to please BMW purists, he built it to go drifting and that’s when you need a 1000hp twin-turbo V8 under your bonnet. It’s hard to believe that it’s only February and we’ve already got one of the most insane builds we’re likely to see all year on our hands, but here we are, and we’re pretty happy about it. A huge amount of work has gone into this car and there’s no way you can’t be impressed by such an insane build and Fredrik himself is absolutely over the moon with his drift creation. There are, of course, some tweaks left on the to-do list, such as a change of livery and some small engine upgrades, but otherwise there are no plans to go changing this M2 for anything else just yet and we’re not surprised as it’s going to be somewhat of a hard act to follow. The only thing for Fredrik to do now is enjoy getting as sideways as possible and that’s something he and his M2 are both rather good at. 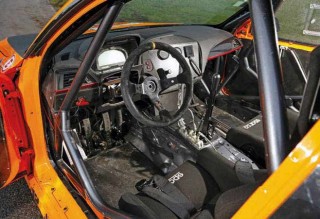 “A pair of Sparco Ergo seats, with removable head bolsters to allow Fredrik to see where he’s going once sideways, have been installed with matching Sparco five-point harnesses” 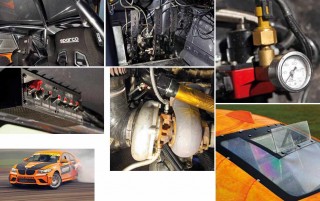 THANKS Autoteamtrafi kkskole Nannestad, Mad Croc Energy Norway, Jack&Jones Trondheim, Federal Tyres, Norgesdekk, RFS Performance, Wæraas AS, bygg & håndverkstjenester, ST Motor, Bavaria Gardermoen, Samsonas Norway, Gatebil, Steinspruten Jessheim, my fiancée and my son for the support, my dad, the rest of the family, my mechanics and all the supporters I have.