The rise and rise of the performance diesel has been fantastic news for people who want a quick, powerful car but also need something with decent fuel economy that has to perform daily driver duties. We’d all love an M5, for example, but living with the fuel economy? Not so much. A performance diesel, on the other hand, manages to deliver plenty of performance, certainly as much as you’ll ever really need, along with the sort of fuel economy that won’t make you cry every time you have to fill up. Win-win. The only downside is that even the hottest of hot diesels don’t look as exciting as a full-on M car, but there’s no rule that says you can’t make your sensible diesel into something more visually thrilling, which is exactly what Jussi Korvola has done and his “M335D” is the rather sexy end result. 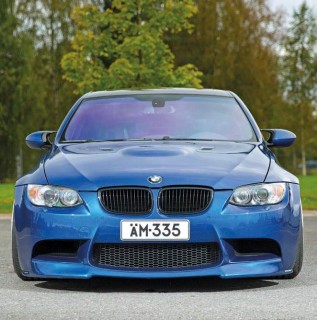 Finnish BMW enthusiast Jussi has been a fan of the blue and white roundel ever since he was little, being ferried around in a BMW as a kid clearly rubbing off on him in the best way possible. As far as he was concerned, it was going to be BMW all the way for him as soon as he could drive but not just any old BM, it had to be an E30, and he turned boyhood dream into teenage reality with a handsome 325i as his very first car. Nice, and certainly beats the hell out of the hatchbacks most of us ended up with as our first set of wheels. That was a little while ago now, though, and Jussi has worked his way through a number of BMWs in that time, all of which have led up to this moment and this car, his E90 335d. “I was looking for a diesel car because I had been building an E91 335d M3 replica but I did not finish it on schedule and had to get another car for the summer,” explains Jussi. “I wondered about the older car but this E90 335d looked good and it was the same colour as the E91 project so, as I was planning on building another M3 replica, I was able to swap parts from that car onto this one. I like the E90 body style and the 335d engine is easy to tune,” he adds, and those are two very good reasons to buy this car.

The plan, then, was to build another M3 replica and this time to finish it, unlike Jussi’s last project and, as you can see from the photos, it is mission accomplished and this is one good-looking E90. We begin with the colour, Le Mans blue, and that is a great place to start, it’s such a rich, lush metallic blue that really pops in the sun and just might be one of BMW’s best blue hues. Start with the right colour and you’ll struggle to build a bad-looking car and if you’re getting stuck into a killer build then it will only help to enhance it, which is exactly what’s happened here. The normally unassuming E90 has been treated to the full M3 conversion: bonnet, front lights, front bumper, wings, skirts, mirrors and rear bumper, with quad exhaust conversion of course. The transformation is complete and absolute and as a result the car looks fantastic, which kind of goes without saying, really. The E9x M3 may now be over 10 years old but it’s still a fantastic-looking machine that strikes pretty much the perfect balance between all-out aggression and restrained, muscular elegance. However, Jussi did not simply add all those M3 components, take a step back and admire his work, oh no, he wanted to make his 335d that little bit more special and so there are plenty of little touches here that help set it apart. Up front there’s an aggressive splitter that fills out the gap in the M3’s chin while at the back sits a CSL-style boot lid (Jussi’s favourite mod on the whole car) accompanied by a set of LCI LED rear lights and we especially love the custom “M3D” badging on the side repeater strips, a neat touch.{module Autoads} 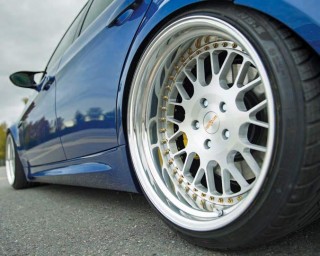 As we always say, once you’ve got some wide arches you need the right wheels to properly fill them out and Jussi has cut no corners here, opting for a set of monster rims that not only look sensational on the car but which also do an awesome job of filling those fat arches to bursting point. “I had already bought these Rotiform LVS wheels for the E91 335d but as that car was not finished I put them on this E90 instead,” explains Jussi, adding, “I had long dreamed of getting some Rotiform wheels because they looked so good” and these LVSs do not disappoint one bit. The brushed centres are just gorgeous, the fully-polished stepped lips are seriously sexy and the gold hardware is the perfect finishing touch. What’s most impressive about them, though are the sizes because these 19s measure a hefty 10” wide up front and a gargantuan 12” across at the rear, the perfect accompaniment for that beefy body kit. No less impressive is that fact that Jussi has opted to tuck his Rotiforms under those arches, no mean feat considering how wide those wheels are, and he’s achieved that stunning stance via a set of BC Racing Extra Low coilovers. They certainly live up to their name, delivering a serious drop and here they’ve been set-up to give just that little bit of rake, with the nose ever so slightly lower than the rear, which makes for one mean profile.

It’s not just about looks, though, because with a twin-turbo 35d lump under the bonnet it’d be silly not to tweak it just a little bit, especially as it’s so easy to do. Of course, just a remap was never going to do for a man like Jussi so this 335d has been treated to a 3” cat-less downpipe, a CP3 R90 high-pressure fuel pump and a Wagner Tuning intercooler along with an AJ Performance remap and that has resulted in 410hp and a gargantuan 642lb ft of torque, awesome figures which show the true potential of the M57. The icing on the cake is the addition of a Quaife LSD, which means he’s actually able to get that power and torque to the tarmac, or lighting up the rears whenever the mood takes him. Last but not least we come to the interior and, at first glance, it might seem like there’s not much to write home about, with this appearing to be just your standard M Sport cabin, but look closely and you realise that the iDrive controller doesn’t belong in an E90… What Jussi has done is retrofitted the NBT EVO id5 setup, one of the latest iterations of iDrive, and that means he’s got all the latest features, like the power and torque displays, and the latest high-defi nition screen as well as the most powerful hardware buried inside his dashboard. It’s a really nice addition and having the newer, all-singing, all-dancing iDrive makes the E90 feel a lot more modern to use as a result. 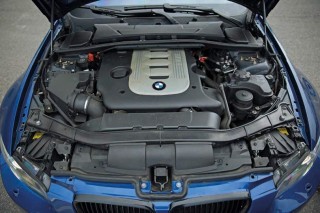 Jussi’s M3-inspired 335d is a fantastic-looking car, not just because of the M3 bodywork, but because he’s made the effort to take it that little bit further and make it stand out even more. Add to the styling that serious drop and those spectacular wheels and you’ve got the ingredients for a killer E90, but with those pretty serious under-bonnet mods thrown in as well, this 335d has the go to more than match its show, and that’s the kind of build we like to see. Despite ending up with such a slick saloon, Jussi has already sold it and moved onto his next project… another 335d, would you have guessed? He’s opted for an E91 this time just like his first, unfinished M3 replica project, but this one, which he has christened his “M3D,” is a full-on build that is well on its way to achieving completion. When it comes to cars, Jussi is clearly a guy who knows what he likes; he knows how to get the best out of his 335ds and, as far as we’re concerned, he can do no wrong.

He’s achieved that stunning stance via a set of BC Racing Extra Low coilovers. They certainly live up to their name, delivering a serious drop” 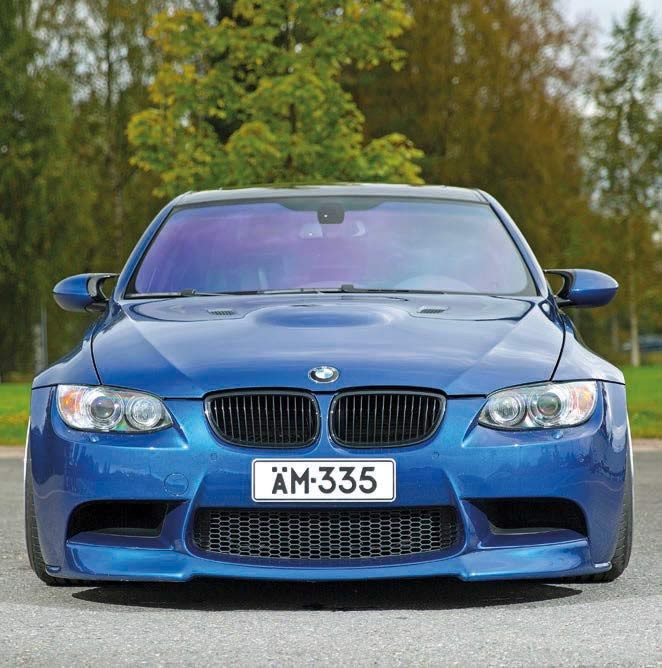 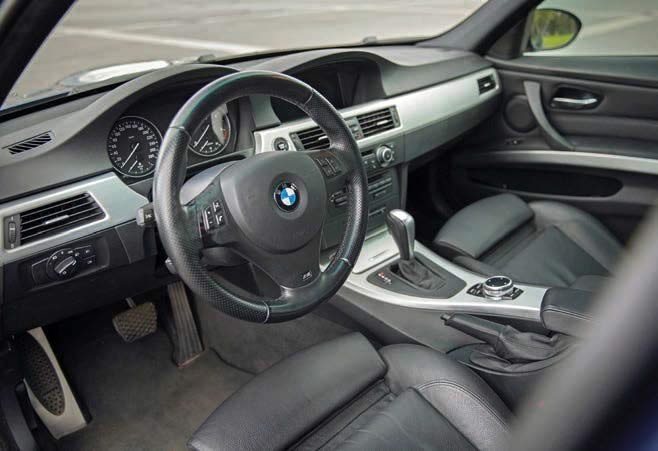 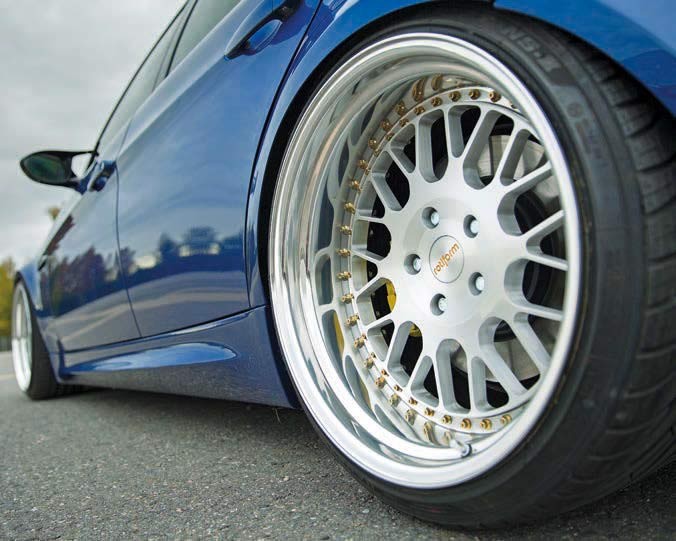 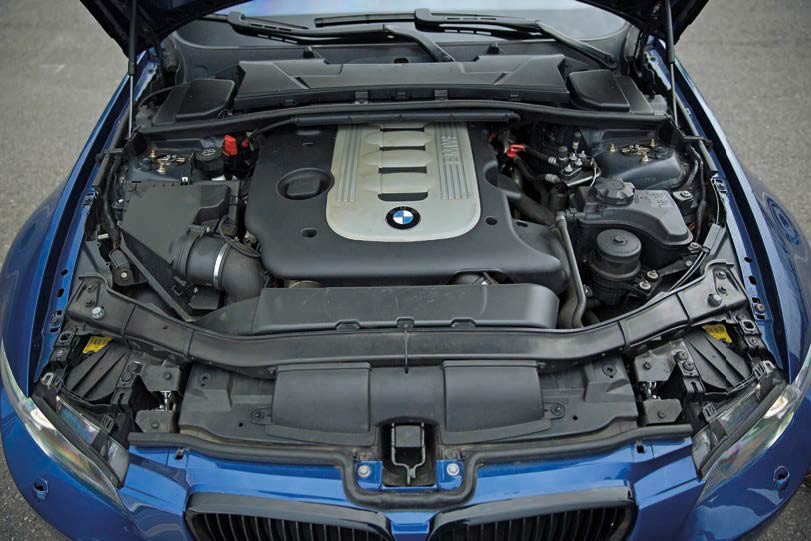 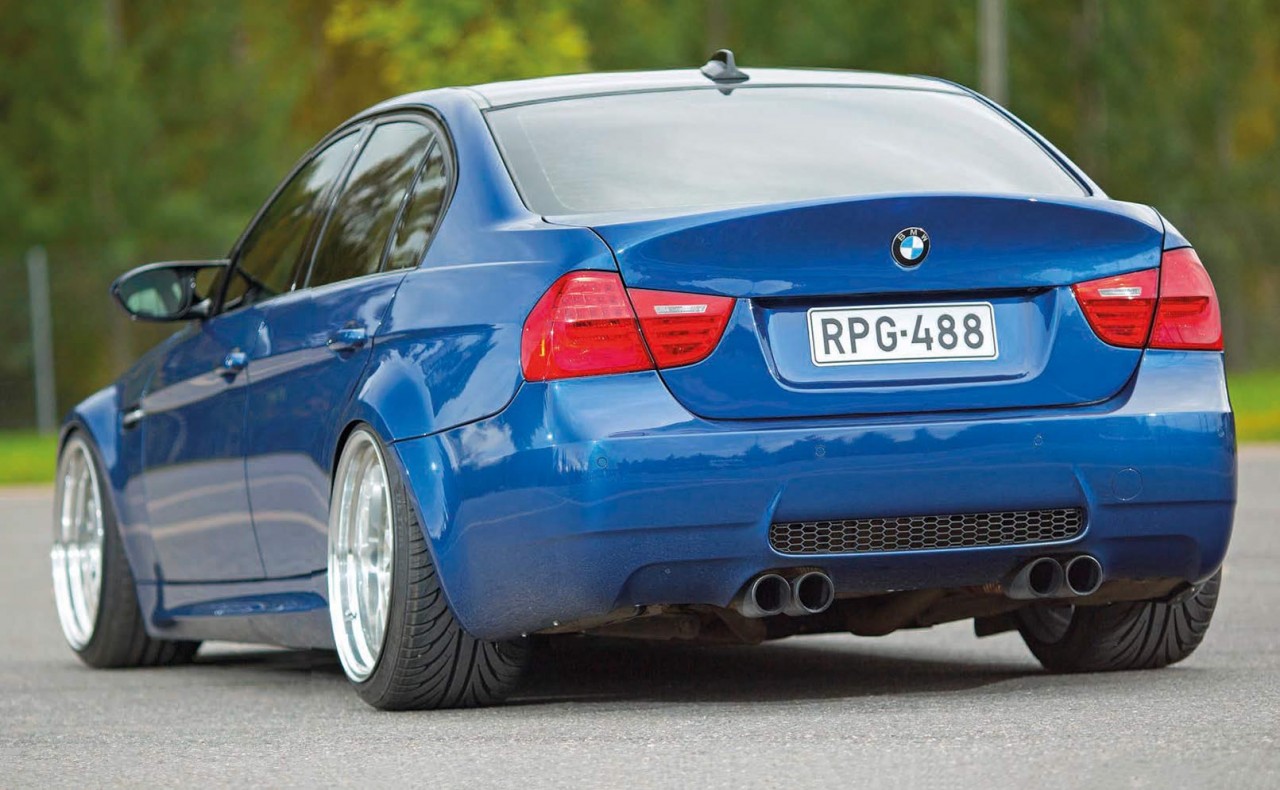