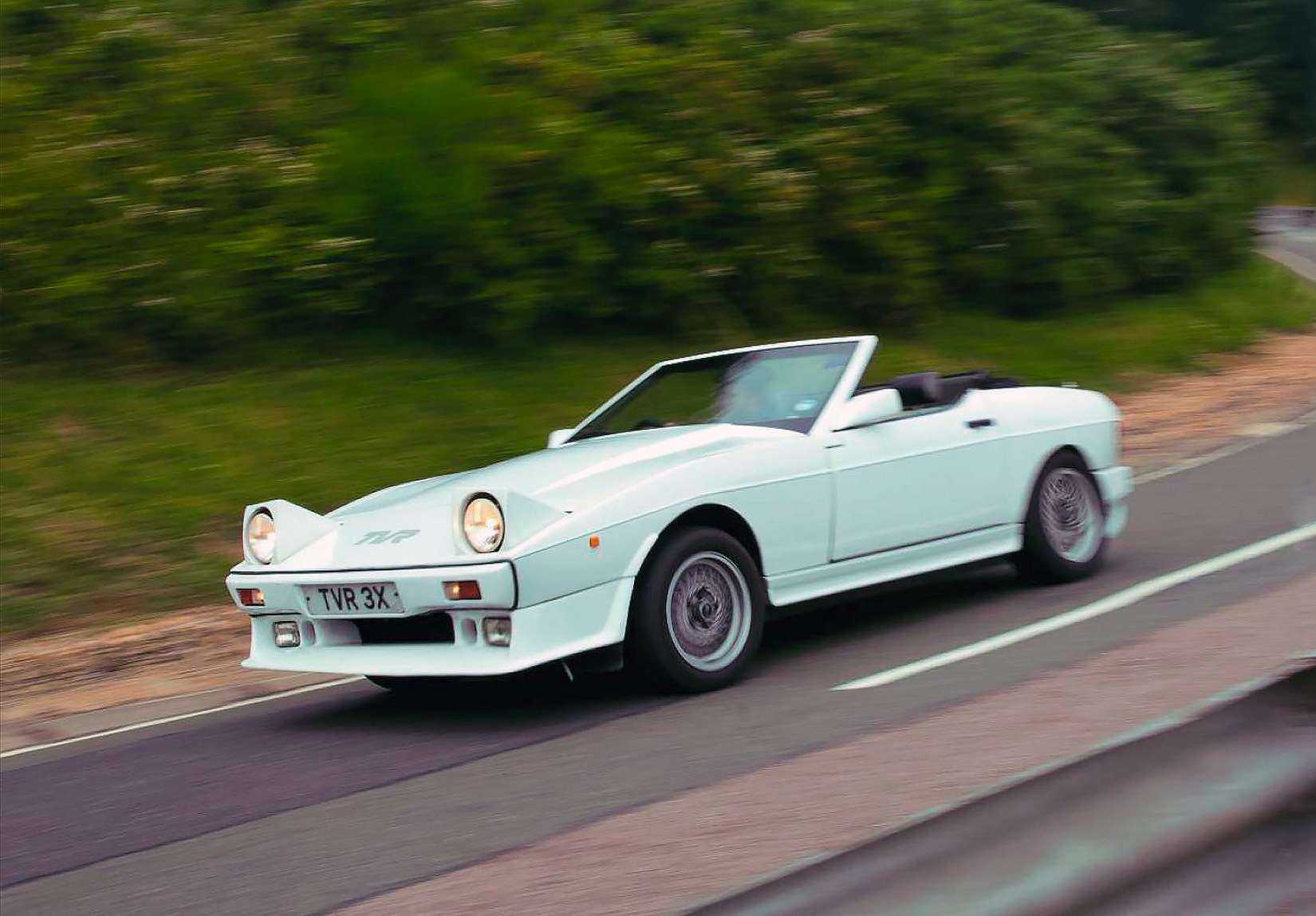 TVR 390SE 1984 Test-Drive. Hammering along high-speed straights in the TVR 390SE makes for a striking contrast with the Toyota MR2. Whereas the MR2 felt saloon-like in its composure, just refined enough to contemplate a long trip without compromising fun, the TVR shakes like a space shuttle on re-entry. The steering wheel, needing a hefty heave to change course at the best of times, whips and writhes at the slightest hint of a surface change. The clutch pedal needs 85lb of pressure to operate, the gearshift is also weighty, and all the while the flimsy glassfibre bodyshell rattles and knocks alarmingly. In a year when the MR2 sent the Ginetta G25 and Panther Solo into a career- ending five-year hiatus, how could this overgrown kit-car succeed?

The answer lies beyond its glue-and-screwheads aesthetics. The Tasmin convertible shape – and the idea of a Rover V8-engined TVR – was established by 1984, but as Peter Wheeler bullishly stated in the 390SE’s October press release, TVR intends to return the sports car to those days of high-performance motoring that fuel crises and ever-increasing legislation have almost wiped out.’

It’s the sort of to-hell-with-it attitude that formed Wheeler’s TVR engineering ethos for the next two decades. The world of the British sports car was sent hurtling into the performance realm of the supercar. His target top speed was 150mph.

To do this Wheeler employed 1984 British Saloon Car champion and Rover V8 tuning expert Andy Rouse to overhaul the already-fast 350i, using ideas straight from the paddock. Rouse bored the V8 out to 3905cc, gas-flowed the cylinder heads and added high-lift cams and bigger valves. Cosworth provided the pistons. A healthy 275bhp – up from the 350i’s relatively mild 190 – was the result.

To cope with the power Rouse added a Torsen limited-slip differential, 225/50 VR15 tyres and a package of underbody aerodynamics unseen on a road car since tentative Seventies experiments with ground effect – a deep front spoiler with channelled brake-cooling ducts, side skirts, and a bizarre rear wing that hung beneath the bumper in the manner of a racer’s diffuser.

Concentrate hard, and you can feel it all working. Basic V8 Tasmins have a reputation for unruly oversteer but the 390SE grips tightly, its tyres square to the road in corners that have the MR2’s Bridgestones slithering. This, plus the limited-slip diff, means it’s relatively easy to transmit the power to the road, even if you’re carving arcs through sweeping A-road bends.

The 390’s power delivery feels unusual compared to a standard 350’s. There’s not actually much difference in torque – 270lb ft against 220 – and it’s delivered at a cruise-friendly 3500rpm. However, as with all these Eighties performance cars, thanks to Rouse’s work on the engine’s valves and cams, it’s best when revved hard. Beyond 4000rpm it shakes itself free from torquey V8 laziness, and the exhaust note takes on an unexpectedly shrill, gargling edge as the car rides an immense second wind that makes 120mph feel effortless. Lift off, and it spits and crackles like a racer.

Before Rouse was brought to Blackpool, Wheeler had experimented with turbocharged Ford ‘Cologne’ V6s and been dissatisfied with the results. The 390SE, therefore, seems to be proof that forced induction wasn’t needed.

Rouse’s tenure didn’t last long. A pay dispute with the irascible Wheeler ensued within a year, but by this time TVR had the recipe it needed. Production of 390SE conversions was first entrusted to Rover specialist John Eales, before TVR bought race-tuning outfit North Coventry Kawasaki, rebranded it TVR Power’, and brought all engine development in-house. Bespoke engines would follow.

Much muscle power needed for steering and gearchanging

Roadholding and grip are immense, even if build quality isn’t

As Lotus had done with its Turbo Esprit, by harnessing genuine motor sport technology TVR set itself apart from the rest of the ailing glassfibre herd, and in doing so created a 150mph future for the specialist British sports car.

This might sound bold, but consider what happened next. After the British sports car sector had recovered from the twin attack of the hot hatch and the Mazda MX-5, it hit back with the Lotus Elise, Ariel Atom, Caterham Superlight and a host of others. All were successful from the perspective of a small manufacturer, and they could be built safe in the knowledge that a giant like Mazda would never think of building an 800kg car with no windscreen or carpets. But it took TVR, and the notorious boldness of Peter Wheeler, in 1984, to offer the world a roadster with running gear derived from a championship-winning touring car for less than £20k. And for that we can forgive its rattling dashboard.

I’d saved up for years, and finally had enough money to buy my dream car – a Lotus Esprit – in 1985. Then I went to the dealership and was totally underwhelmed by it,’ says Russ, who has owned his 390SE from new. So I bought this instead – it was much more exciting.

’Within days, I crashed it at a TVR Car Club track day at Silverstone, damaging both bumpers. ‘It was then that I realised how disorganised things were at TVR. They outsourced production of the spoilers and splitters, and couldn’t get any spares to fit. These had to be commissioned.

This sums up the TVR ownership experience of buyers finishing their development for them. I had to refit the column stalks, for example, but often the club stepped in when the firm couldn’t help. It still does!’