Wolfgang Koller’s 90 saloon packs a 20v turbo five-pot punch, a full quattro drivetrain swap and will eat you for breakfast.

I like to use this car for special occasions,” says its proud owner and builder, Wolfgang Koller. “Like quarter-miles, half-miles, and weddings…” Only a few moments in his effervescent company and already we’re awestruck by the quality, malleability, entertainment value and sheer audacity of this build. After all, while blushing brides are famously quite keen to get to the church on time, the idea of lining up alongside the Christmas tree lights in full wedding regalia and catapulting up the strip is presumably not something that gets mooted all that favourably. Finding a car that can excel in both of these entirely diverse scenarios is a rare treat indeed, and Wolfgang’s wonderful creation is frankly something of a marvel. 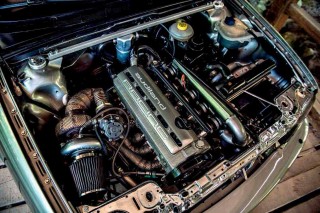 Perhaps the best part of all is that people really have trouble trying to figure out what the car is. If you look at the front dead-on, then it’s clearly an RS2 – except that when you move around to the side you find that it’s a saloon. And what’s this 90 saloon doing running a big-power 20v turbo five-pot and a full quattro drivetrain swap? It’s like a greatest hits of 1980s/’90s Audi engineering, smooshed together into some kind of quantum vortex and atom-split into one catch-all solution. A practical four-door that’s also a total headcase.

Perhaps we shouldn’t be surprised. After all, as the driving force (pun certainly intended, ta) behind Germany’s revered Audiland Racing, Wolfgang is a man who knows his Ingolstadt onions. The fella had a fairly early start, with his quattro career kicking off back when he was nineteen with an ’1987 Coupe GT quattro. “I started out modifying the wheels and the suspension, before moving on to the question of power,” he recalls. “The engine was a 115bhp 2.2-litre, and I modified the cylinder head and fitted a crank from ABT, as well as upgrading the exhaust system and manifold.”

It’s true that modifying can be a manner of addiction, and the path that’s been followed here is a textbook case. The initial alterations in both altitude and attitude acted as a gateway drug, and it’s never long before the lust for thrust begins to push with its insistent urgency and pointy claws. In Wolfgang’s case, it all proved too irresistible for words, and his home-brewed modifying adventures naturally led him to be buying and selling Audi parts, something that developed into a proper parts business and vocation; the enthusiasm for tuning stirred its own elements of malevolent energy into the mix, and as all of these stars symbiotically aligned it was only a matter of time before he was cutting the ribbon on the doors to the new business, Audiland Racing. And the rest, as they say, is history.

I’ve changed almost every single element of the car 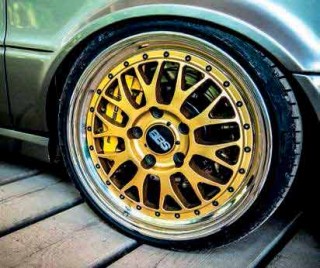 So why an Audi 90 this time, of all things? Well, quite simply, Wolfgang crashed his old Coupe GT and he needed a new car. After a quick search, he unearthed a front-wheel-drive 90 for sale not too far from home, packing a 136hp 2.3-litre motor. (For the uninitiated, the 90 nameplate was the one applied to the versions of the Audi 80 that were running five-cylinder engines – it was a more luxurious version with plush velour seats, and identifiable by its different lights at either end.) Suffice it to say that the 136bhp number didn’t stay the headline power figure for long, as Wolfgang immediately got elbows-deep in the oily stuff to reimagine the saloon as the ultimate version of itself. “I built it up to 550bhp, with a Garrett GT35 turbo and the 2.2-litre 20-valve engine out of an S2,” he grins. But impressively – and perhaps slightly improbably – that wasn’t enough for this inveterate tuner. Perhaps it was the tortured screams from those overloaded front tyres that gave him pause for thought, but somewhere along the line he realised that he was putting quite a lot of surprising grunt through the front wheels.

“In 2002 I bought an Audi 90 quattro chassis, and built a completely new 90 quattro 20v turbo,” he explains. “In the beginning I used the engine out of the FWD 90, along with an intake manifold from an Audi S1 to add a little more power. Since then, I’ve changed almost every single element of the car – only the fuel tank and the rear diff remain.” That’s a fairly astonishing boast; not so much Trigger’s Broom as a cornucopia of relentless excellence, this project has been an ongoing quest to refine every individual element of the car in the pursuit of perfection. Topped off by the white carbon Audiland cam cover, this insanely purposeful five-pot kicks out Group B levels of power, and the bangs and flames which explode out of the custom shotgun exhausts really are a treat for the ears and the eyes – check out Wolfgang’s Instagram (@koller.74) to see for yourself. 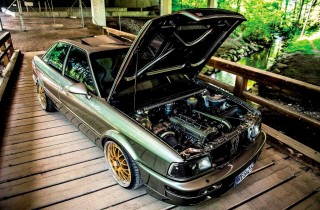 What makes it all the more fun is that, if you weren’t really paying attention, the car almost looks subtle. Sure, the low-slung stance thanks to its KW V3 coilovers and the old-school BBS E28s tell those in the know that something’s amiss here, but the sober grey hue acts as a sort of cloaking device. There’s a reason why military planes are often painted grey; well, three reasons, really – first of all, if you paint the underside of a plane grey, it can blend in with the sky more easily when seen from below. Secondly, and similarly, if you paint the top of it grey then it can camouflage itself on the runway tarmac when viewed from above. And thirdly, and most significantly, if you slather your fighter jet in radiation-absorbent iron-ball paint, it’ll be pretty much invisible to radar.

That, and it’ll fox heat-seeking missiles somewhat. All in all, the stealthy properties of grey sell themselves when it comes to hiding in plain sight. This is very much the reason that the 90 is a stealthy (if sparkly) grey – it flies under the radar. Well, until it starts popping and banging like a rally car, obviously.

The interior is splendidly fi t for purpose too, as Wolfgang’s swapped in the forthright innards from an S2, also augmenting it with huggy Recaro buckets, plus the essential accoutrements for a build like this: oodles of gauges, and a big shift light. It’s all form and function here, working in splendid harmony. A true polymath, built largely by Wolfgang’s own two hands, with the ability to carry out any task thrown at it with aplomb. Dragstrip runs, track days, nipping out for a pint of milk, bridal chauffeuring, this unique creation can do it all. Naturally the colossal thrust will pin the bride back in that Recaro like a force 11 gale, and the cartoonishly large brakes will then pinball her toward the dash, but of course that’s all part of the fun. Wolfgang’s got big plans for 2020 too, involving a bigger turbo and around 800bhp/740lb-ft. When you have a car that can do everything, that gives you carte blanche to do anything.

Thanks: “My biggest thanks goes to Jörg Mies, Peter Kowatsch, Frank De Vigneux, Jürgen Schreiner, and last but not least Robert Karner, for support in every situation.”

Favourite modification on your car: The engine

Hardest part of the build: The engine!

Lessons learned from this project? If you buy cheap, you will buy twice

Wolfgang’s modifications to the 90’s exterior demonstrate an encyclopaedic knowledge of what’s available, what’s possible, and what will work. The front end has been entirely swapped for that from the iconic RS2, with the smoked headlights and indicators complemented by USDM taillights at the other end. The RS2’s wing mirrors have also been liberated, and an oh-so period badgeless Kamei grille stirred into the mix. Naturally a whole bunch of vents have been scythed into the sleek form, as that hot-to-trot motor generates a whole lot of heat, but the sober grey paint hue takes it all back to basics. Subtle, but brutal. Ingenious. 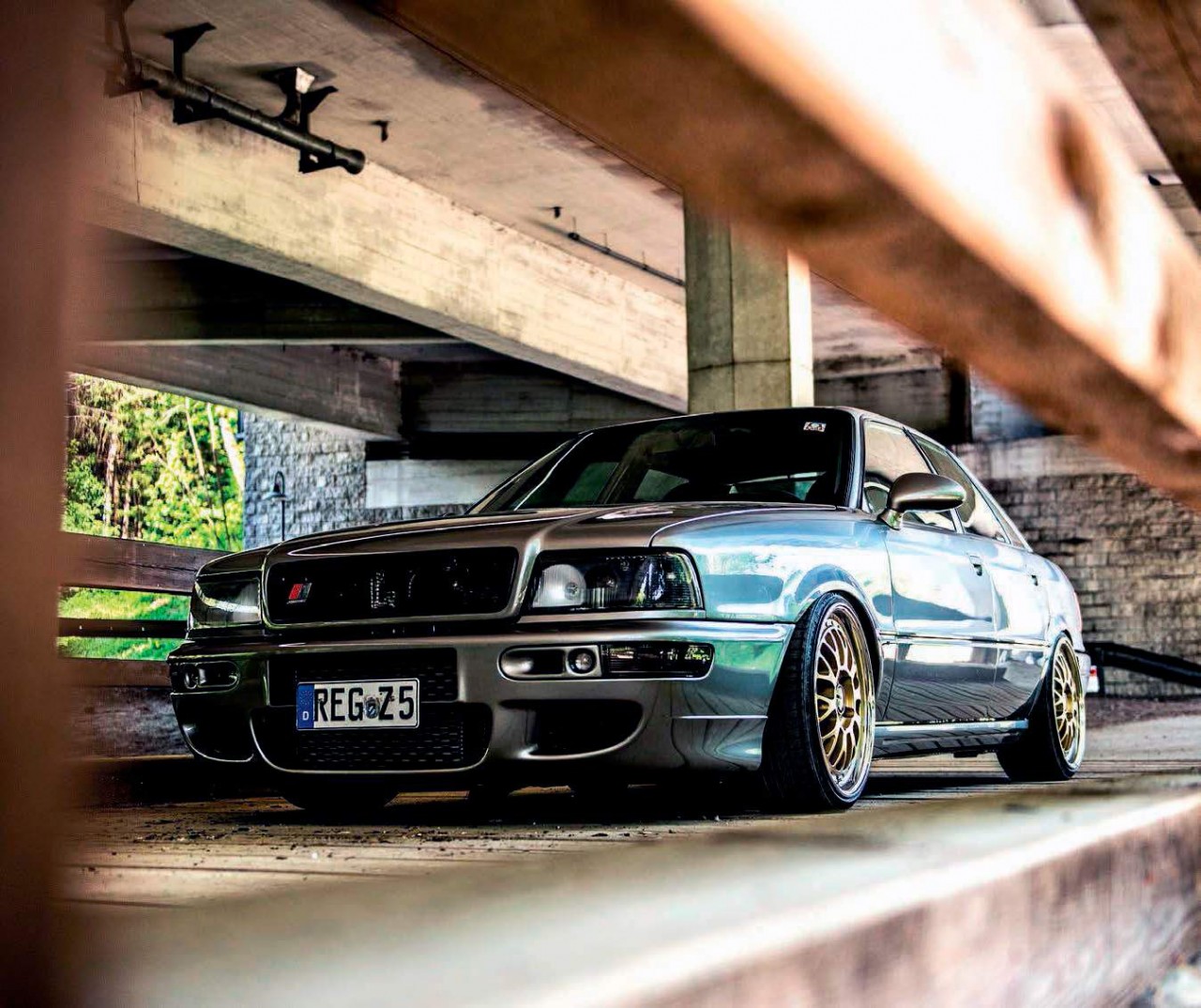 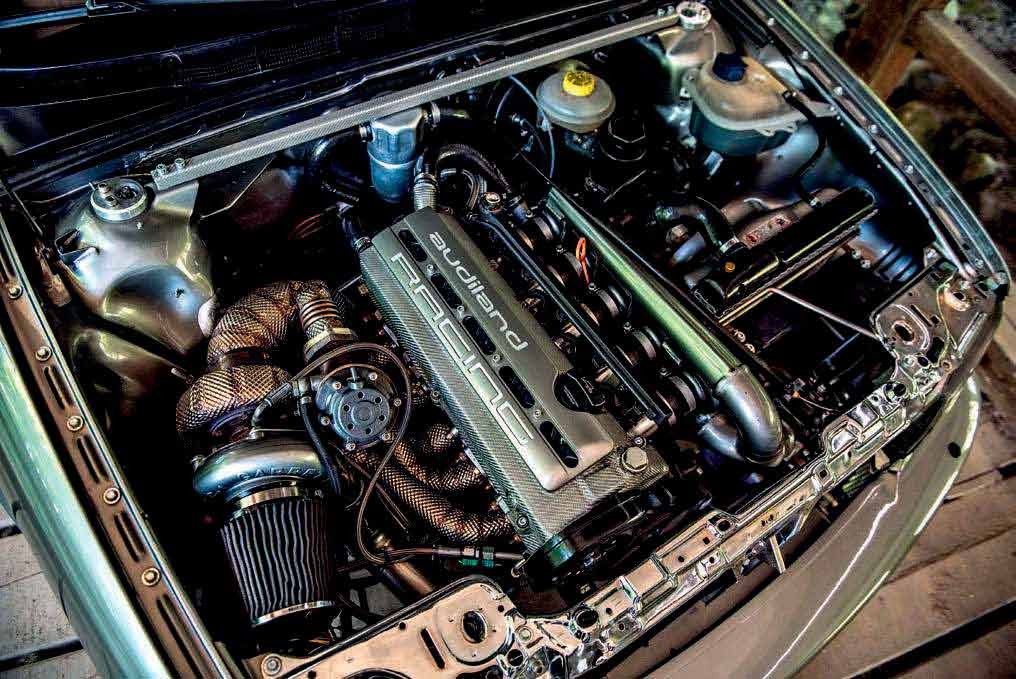 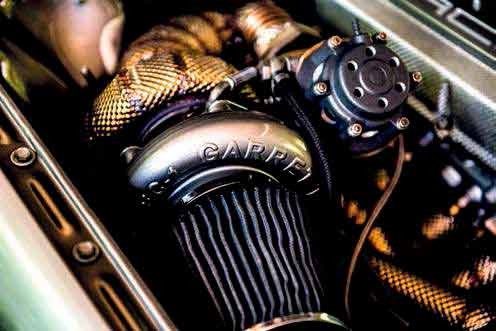 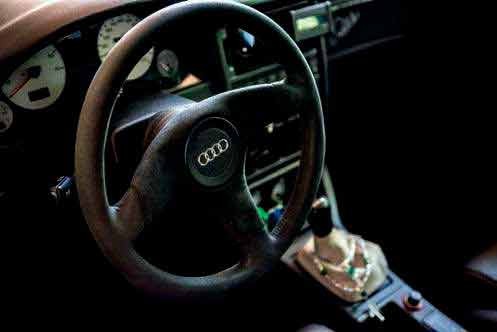 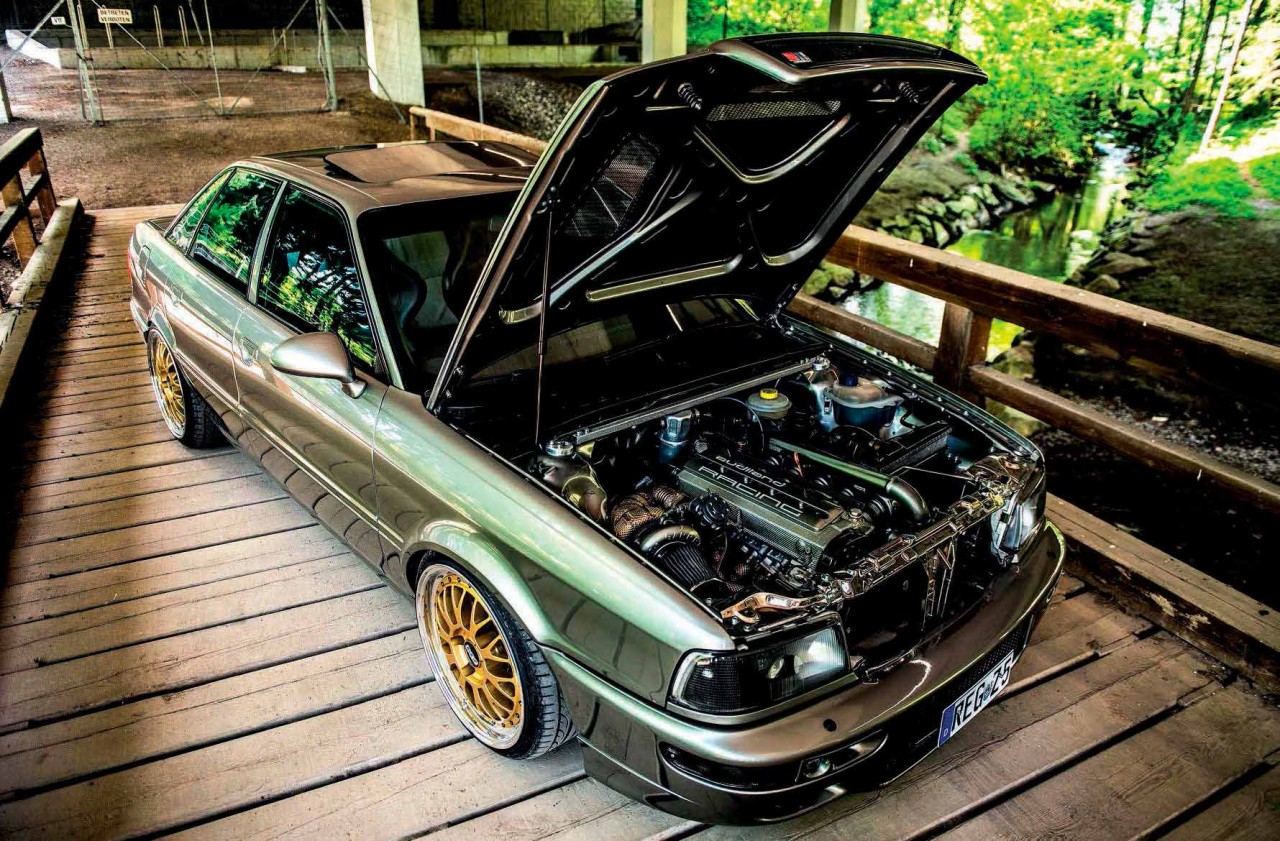 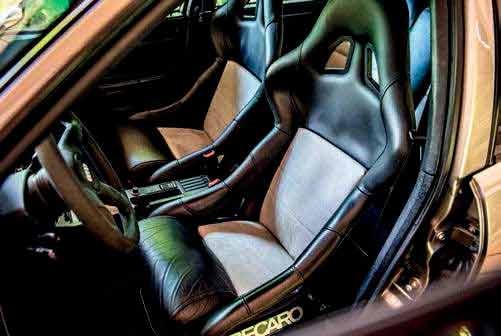 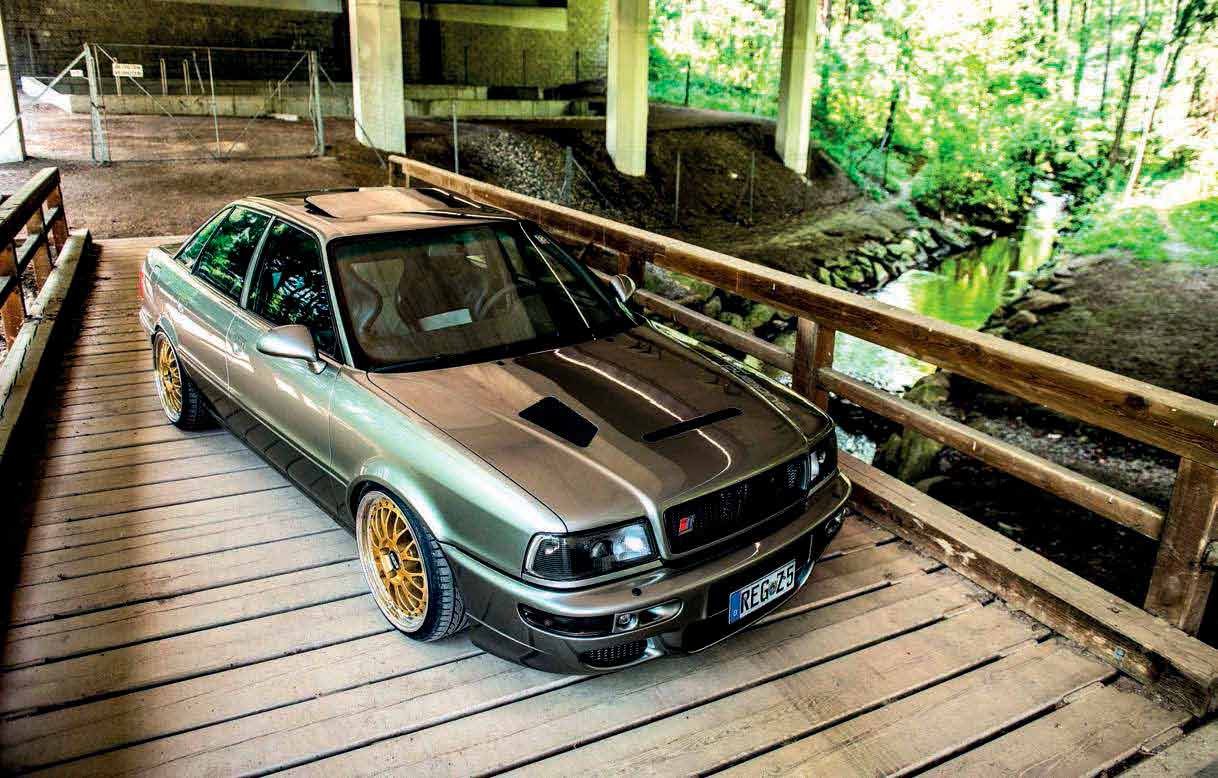 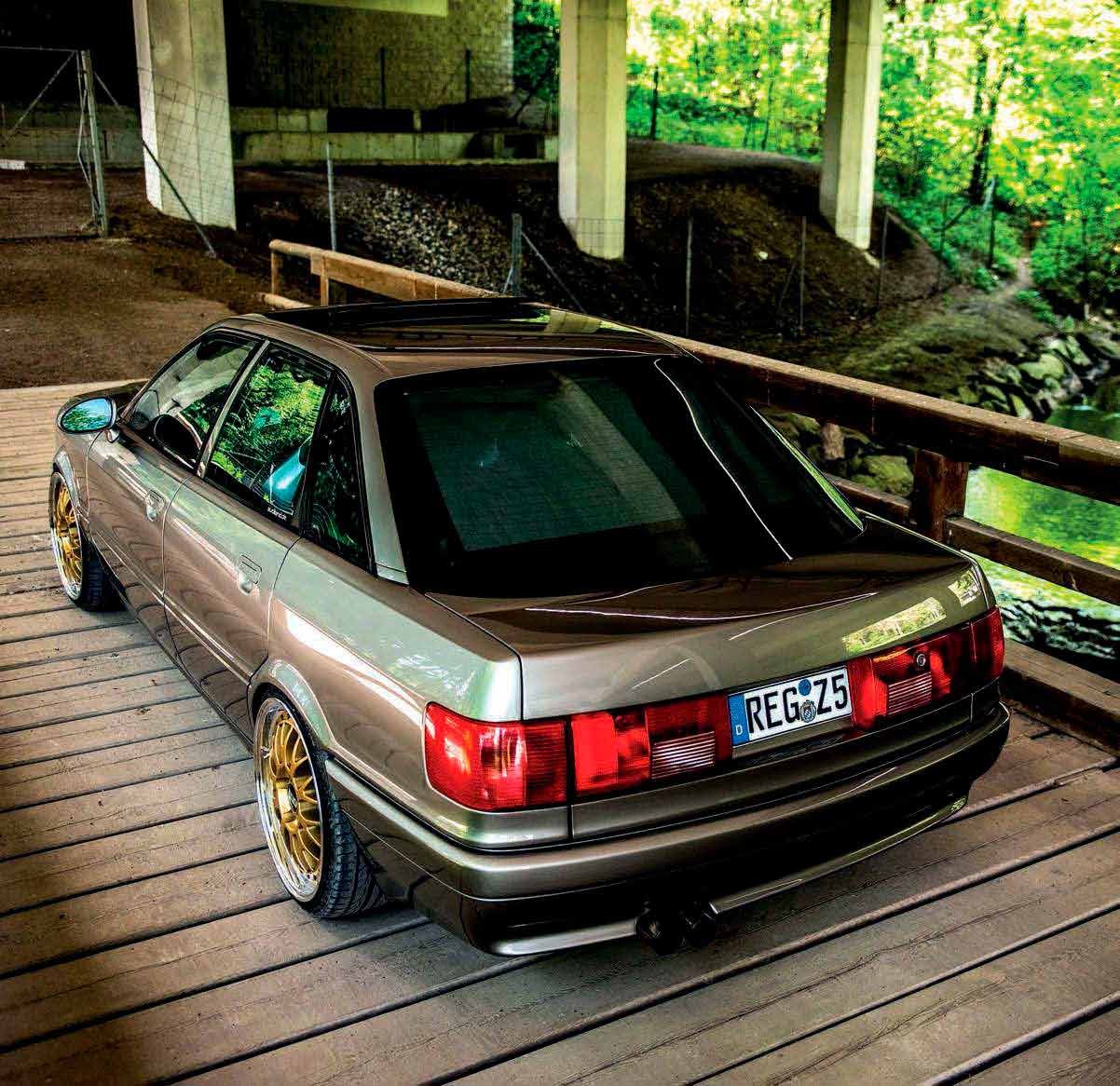 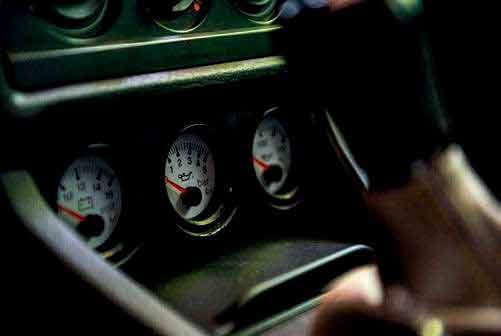 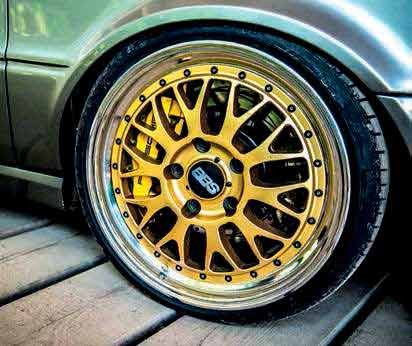 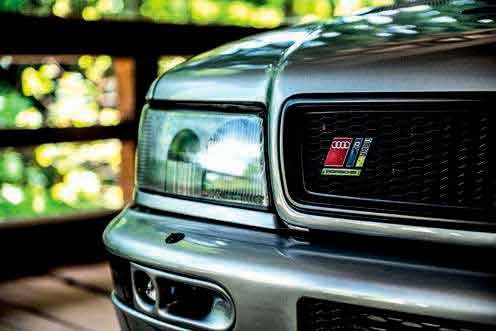 Not your average Audi 90 engine bay. I bought an Audi 90 quattro chassis and built a new 90 quattro 20v turbo. Goodbye air vents, hello gauges! Could this be the best Audi 90 ever? We sure think so!