Purity is not for everyone. Sure, there’s a lot to be said for originality; indeed, it dominates the lives of so many Audi fans we know – the relentless pursuit of obscure or borderline-unobtainable OEM parts. As ageing cars increasingly fall into the hands of modifiers, so original examples become all but extinct. If you’ve ever been to a top-flight concours event (you know, the sort where multimillion- pound rarities vie for supremacy at the hands of eye-wateringly rich people who are smashed on Champagne and trying their best to concentrate), you’ll know that it’s far more in-depth an endeavour than making sure all the screwheads are pointing the same way: if there was overspray from the factory then the restoration must mimic the same overspray, seat materials must be authentically weathered rather than simply brand new in the period-correct material, and so on. The pernickety obsessiveness can be all-consuming. 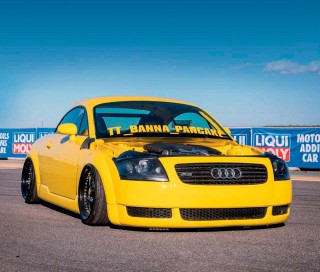 There are some people, however, who couldn’t give a shit about all that nonsense, and Montreal’s Gabriel Laforce is one of them. His vivid and slightly scary Mk1 TT project bullishly waves a middle digit at the speculators and moneyed collectors who are gasbagging on about this car is an appreciating modern classic. He’s built this car according to a higher calling – it’s got the wrong engine, the wrong transmission, wrong wheels, wrong paint, everything about it is fundamentally incorrect. And that’s what makes it so completely awesome. A fusion of ludicrous ideas and the talent and tenacity to ensure that they somehow actually happen has led to the magnificently insane creation you see here. This is not just a TT that’s been painted yellow. This is something else altogether. A madcap brawler from the bowels of Dr. Frankenstein’s laboratory, fuelled by unicorn blood and the tears of purists. Gabriel, it appears, is somebody we’d all better keep an eye on. His approach to modifying is almost Scandinavian – not just in the realm of shoving bucketloads of colossal horsepower into unassuming cars, but by virtue of allowing the seasons to dictate the car’s timescale. Much as the long and harsh winters in Sweden and Norway send petrolheads scurrying into their workshops and lock-ups, with little to do for the snowbound months beyond reimagining their cars as even more unhinged before wheeling them out in the spring to blow everyone’s minds, so Gabriel is also what we might call a winter tuner. It’s probably something to do with the Montreal climate; it’s hot and humid in the summer months, but the winters bring endless periods of deep snow and temperatures well below zero. You can understand why the bleak months would be spent building a sunshiney joy machine, ready to simply enjoy when the snowdrifts retreat. Perhaps that’s why this TT is bright banana yellow.

“For the whole time I’ve owned this car, it’s always been an evolving project,” Gabriel assures us. “I bought it in 2014, and one of the first things I did was to wrap it in yellow. I carried out my first shaved bay on a 1.8T, then converted the engine to run a big turbo – a Garrett GT2876R. In the second winter it was painted yellow – no more wrap! I redid the engine bay to give it a better look, and fully stripped and shaved the interior. And then came the big idea…”

the whole time I’ve owned this car, it’s always been an evolving project

The yellow he refers to is no run-of-the-mill banana milkshake, but über-premium Lamborghini Giallo Corona paint, and seeing it slathered all over that minimalist interior is really quite something – it must be a proper eye-opener on those early morning blasts, no double-espressos required here. And the big idea he’s talking about? Well, Gabriel wanted to shove a VR6 in there. But not just any VR6 – obviously you could buy one of these cars from the showroom with a 3.2-litre six-banger in there, there’s nothing revolutionary about that. No, this guy is very keen not to play by the rules, and what he wanted to see in that bay was an R36. 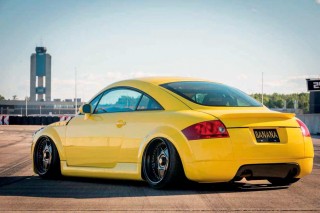 “I’d always wanted to swap an R36 in there, so the next winter that’s exactly what I did,” he beams. This is a formidable motor, a 3.6-litre 24-valve unit that came from the factory with a forged crank, variable valve timing, high-pressure direct injection and all kinds of other tricks. In the Passat R36 this was good for 296bhp in stock form – and of course this engine also appeared in the Porsche Cayenne, so it would have been rude of Gabriel not to fit a Porsche intake manifold to his six-pot as he eased it onto its custom mounts.

“I was originally planning to just swap it in – the TT was designed to take the VR6 so it should have just been a bolt-in swap,” he continues, “although I had a bit of difficulty finding a manual transmission to go with it so I could keep my car quattro, and when I did find one it was very expensive. So I had a bit of a rethink.”

For most people, this rethink would probably have gone along the lines of ‘OK, I’ll fit the engine’s native DSG and worry about finding a manual ’box sometime in the future’. But Gabriel is not most people. The more he let the idea percolate, the more deranged things got, until he arrived at an utterly nonsensical and yet completely brilliant solution: “I always had it in my head that some guys have fitted VR6s to Japanese cars,” he reasons, “so I did a bit of research and here we are: a VR6 mounted way back in the bay for better weight distribution, converted to rear-wheel drive, and running a Japanese transmission.”

but make no mistake, this a machine of pure function 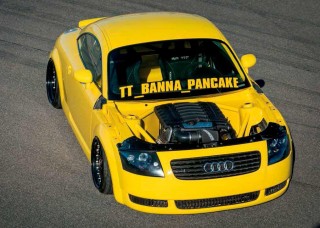 Uhhuh, sure. Seems so obvious when he puts it like that. What Gabriel’s done here is to fit the CD008 manual gearbox from a Nissan 350Z, using a transmission adapter plate, modified 350Z ACT Streetlite flywheel and a 350Z Exedy Racing Stage 1 organic clutch. This channels the power through a custom singlepiece prop to a unique rear axle which fuses the TT mountings with the 350Z oily bits, packing a Nissan diff. Which is a unique way of going about things. Yes, it would have been easier to simply bolt a 3.2 VR6 into the TT and keep it all native, but whoever wanted an easy life? Instead, this car has a custom spaceframed front end to get that engine perfectly positioned for optimal weight distribution, mounted longitudinally rather than transversely, and it’s all bolted to the guts of a Japanese muscle car.

“I’ve done most of the work in my garage with my friends, but I would like to thank Fast Bunny Metalwerks who helped me with some issues I had and made me custom parts that I wasn’t able to do,” he says. And of course this hasn’t simply been an exercise in function-over-form brutality, or change for change’s sake. The entire car is a cohesive lesson in flawless presentation, creating a new-wave kustom vibe to house all of this manic power. That Lamborghini paint and Porsche intake aren’t the only supercar flavours, there’s also a set of staggered Ferrari wheels (actually Autostrada Modenas), and the whole slice of banana fruitcake hunkers down like a champ thanks to its Air Lift Slam Series suspension, the air tank hidden out of sight in the rollcage because that’s just how lunatic Gabriel is. Every inch of it screams ‘show car’, from the full interior wire tuck and artfully scythed dash to the on-point stance and carefully shaved exterior, but make no mistake: this is a machine of pure function. That Wilwood pedal box, custom hydro handbrake and one-off steering column didn’t happen by accident, and the chassis positively glimmers with custom fabrication to help this yellow peril deploy every one of its savage R36 horses. Purity be damned, there’s enough concours TTs out there to keep the box-tickers happy. This split personality TT with its offbeat thinking is just the sort of crazy the world needs.

Hardest part of the build: Figuring out where to put the engine for better weight distribution Lessons learned from this project? Be patient What’s next – any future plans? Remove the bags, bigger wheels and then some performance and handling modifications 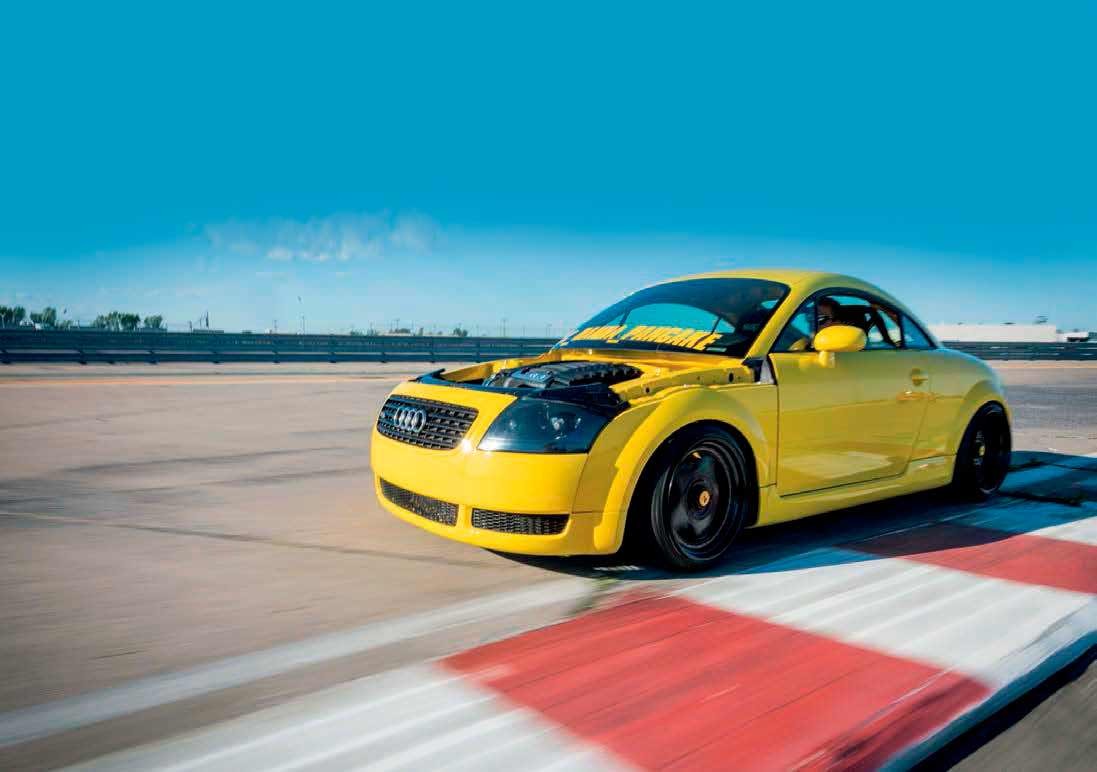 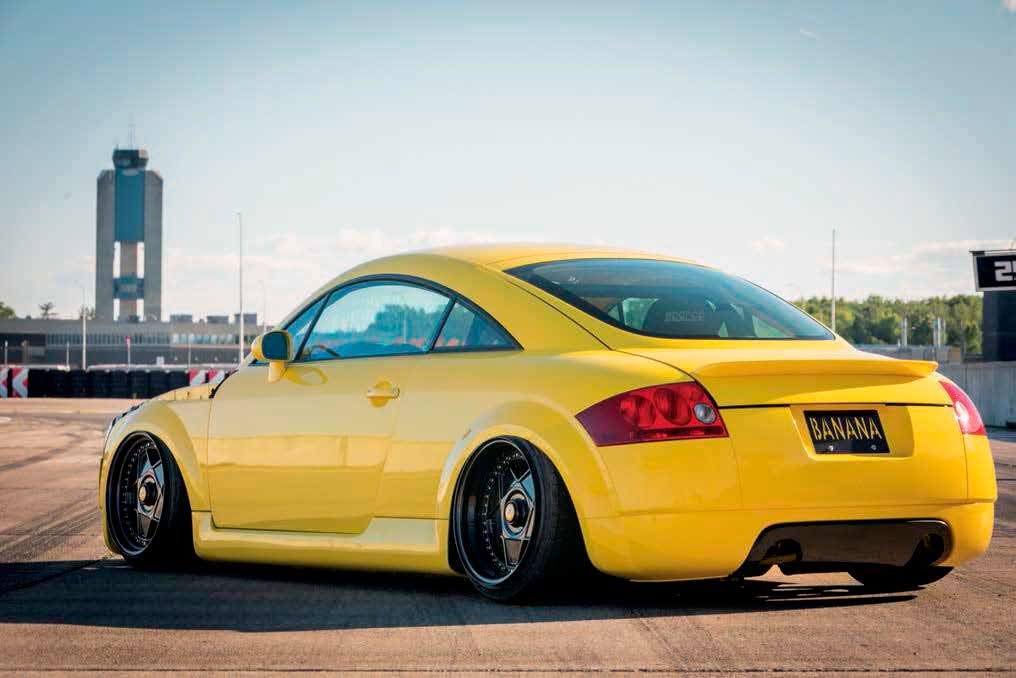 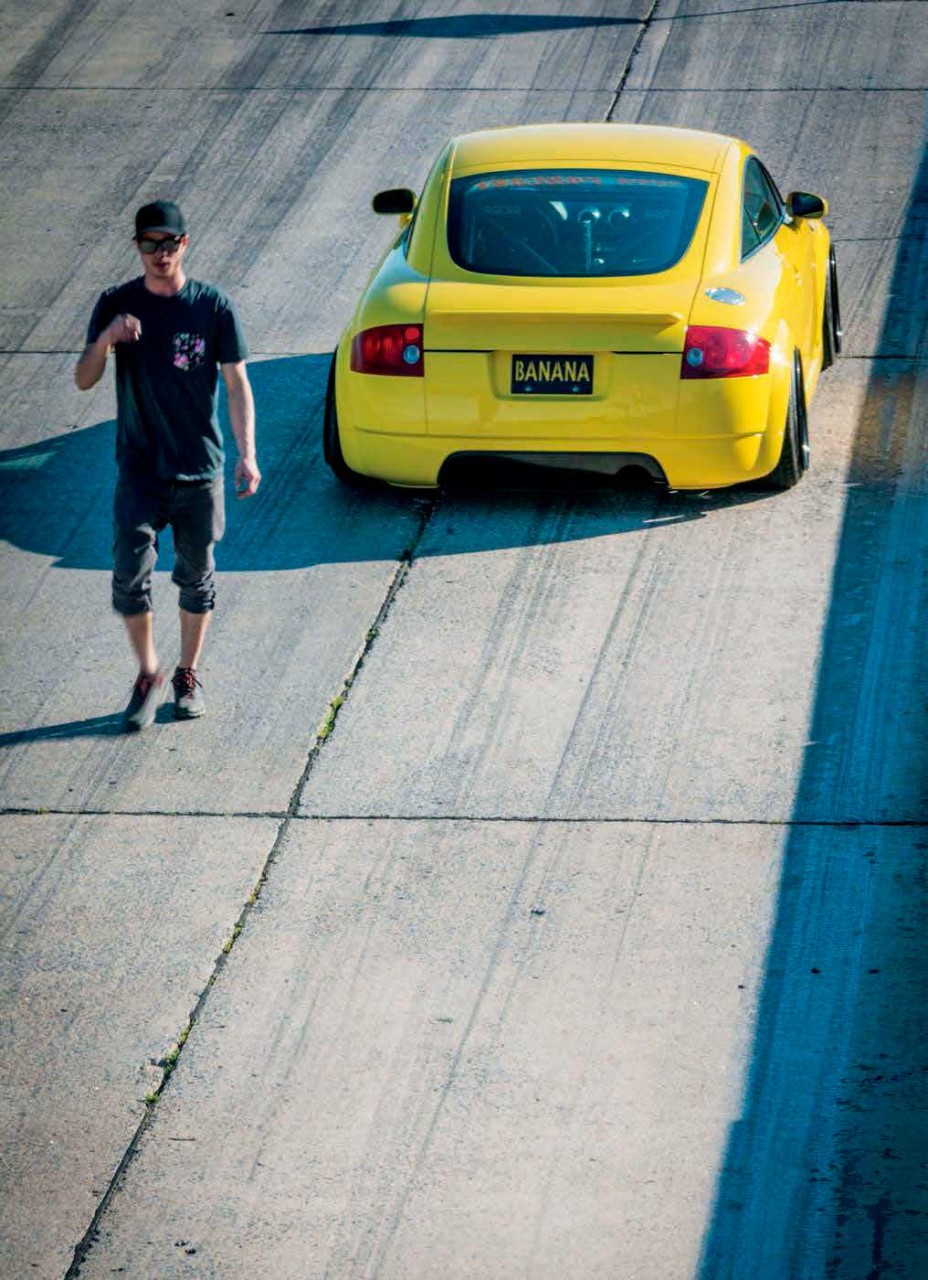 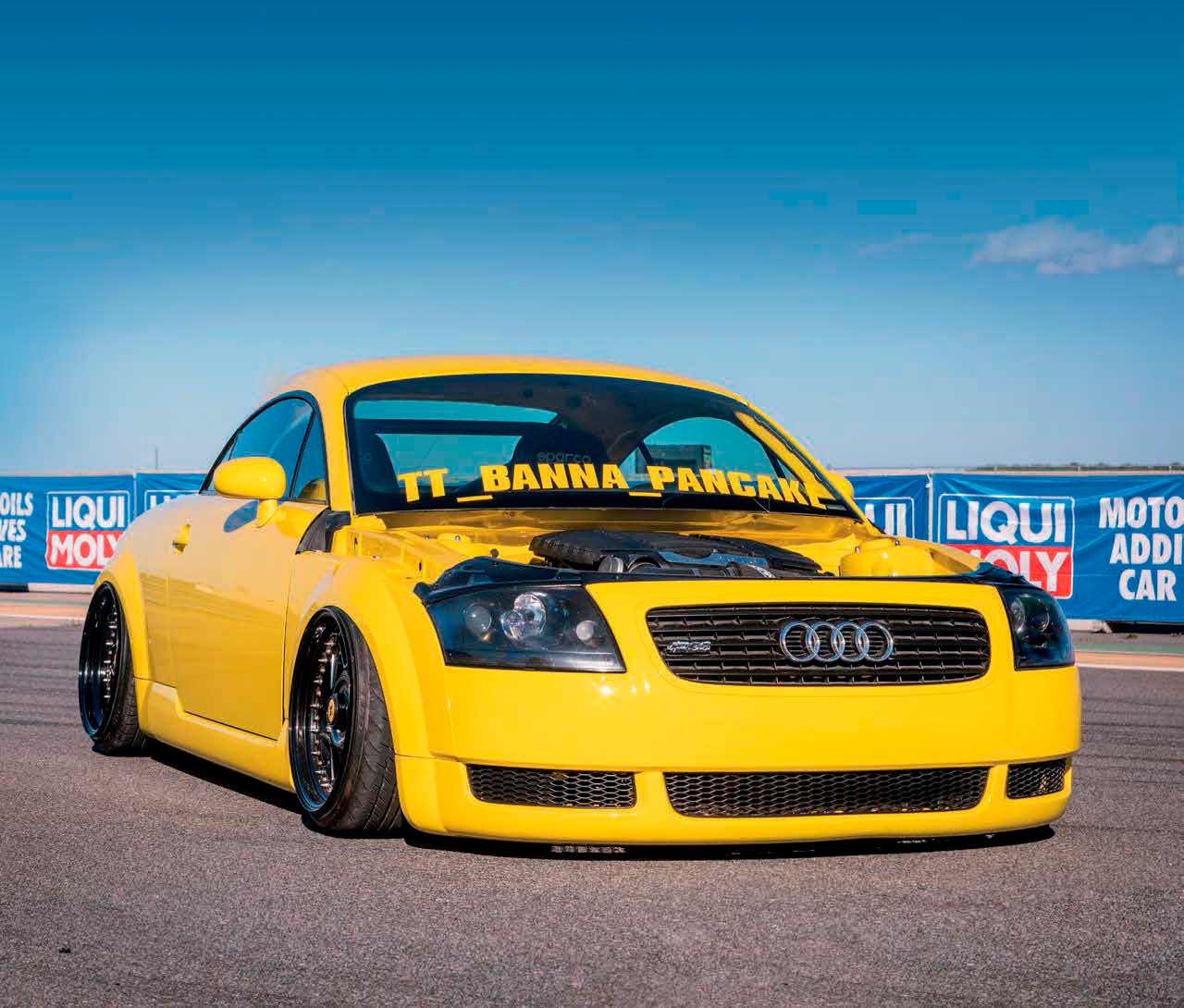 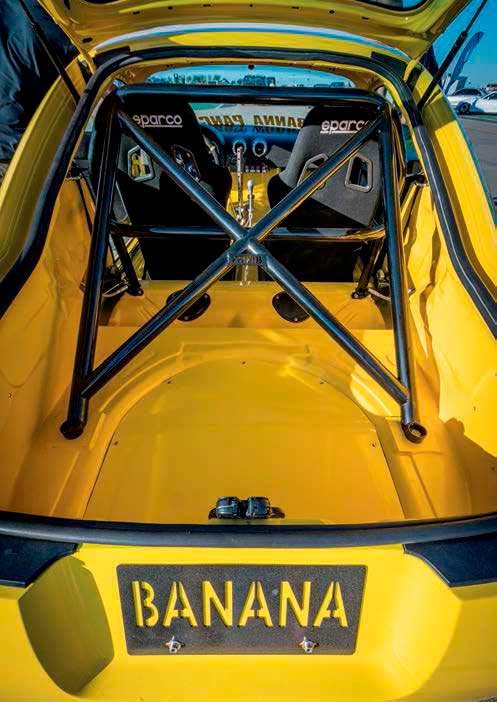 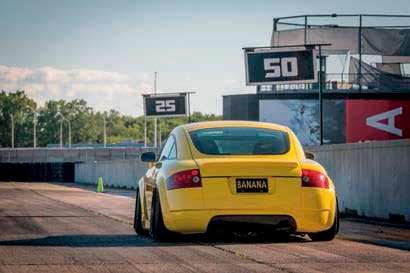 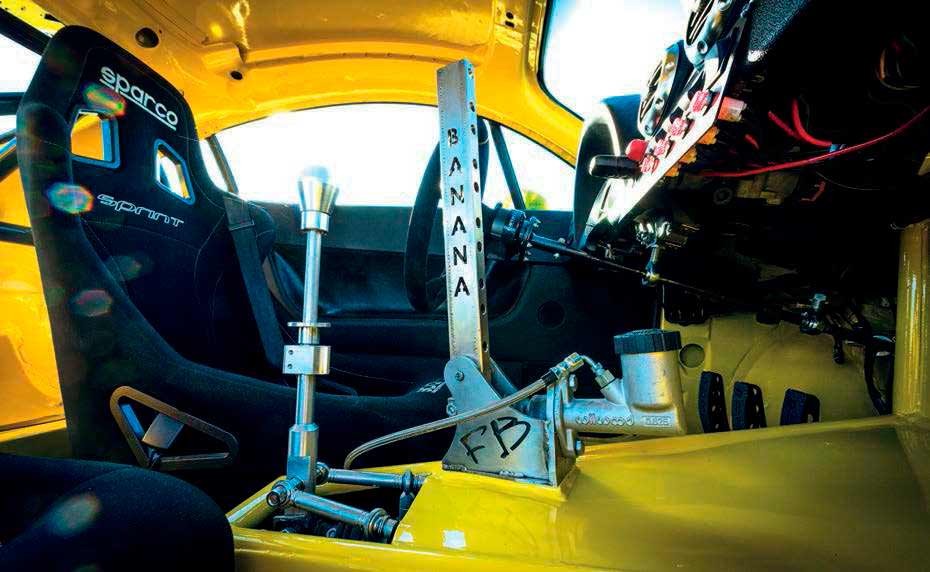 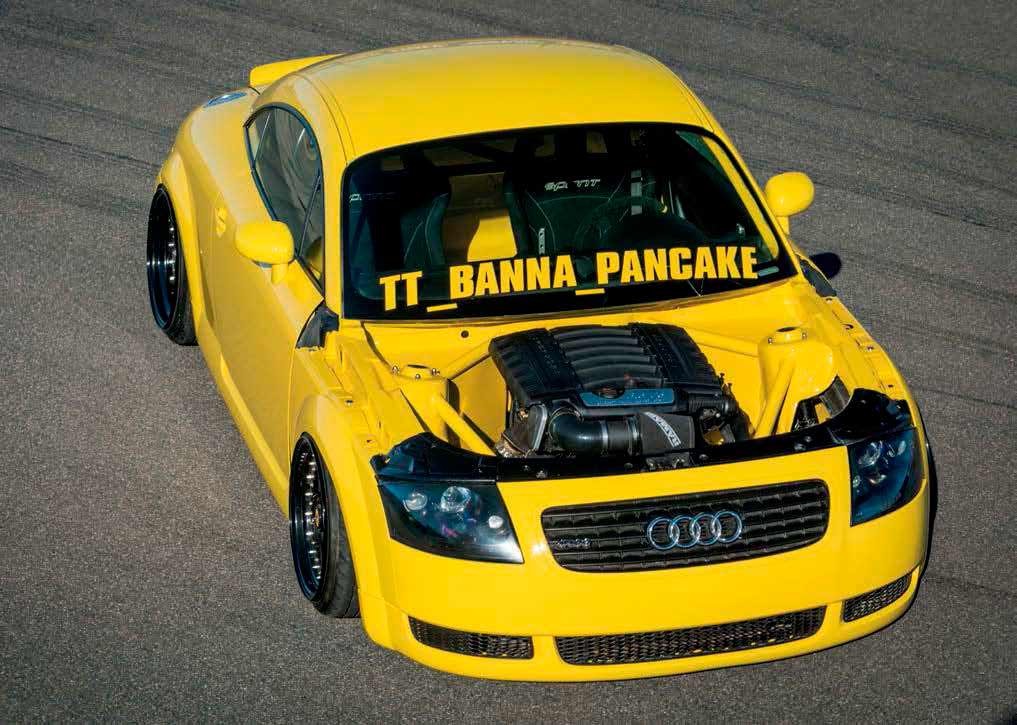 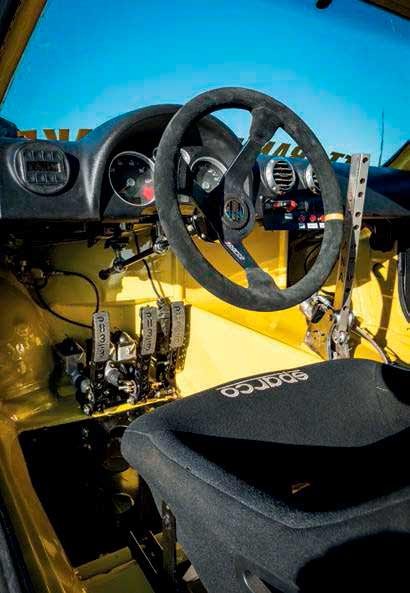 I’ve done most of the work in my garage with my friends. Staggered 17-inch Autostrada Modena wheels and Air Lift suspension combine for an agressive stance. Shaved Passat R36 3.6-litre 24v VR6 engine swap is flawless.