There’s a real stigma in present day society about how having fun does nothing but get in the way of us being the productive little cogs in that big, fat cat-run machine. It’s why we’re not allowed to rock up at our offices wearing loud Hawaiian shirts with our pet dogs under our arms to play with should we get bored. 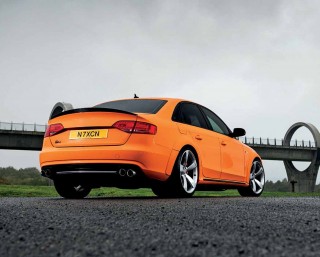 But is it possible to undertake things in a serious manner whilst retaining something of a jovial side if we’re to think outside the box? Scotland-based James here certainly thinks so if his most recent modified car project is anything to go by.

On first impression, his bright orange B8 S4, complete with the festive pumpkin decoration on the bonnet might make it look like nothing more than a little bit of fun, but dig a little deeper and you’ll soon realise this is in fact one of the most comprehensively modified examples of its kind, putting its peers to shame in both the way it looks and how it propels you down the road. Because remember, kids: you should never judge a book solely by its cover…

A self-proclaimed petrolhead from day one, James’ car choice began in what we imagine is a very familiar way for many of you out there. “I started off with RS-badged Fords, which soon made way for the family, wife and kids,” he recalls. “Not that that stopped me – I had cars like Zafira VXRs when the kids were growing up!”

As his offspring began to grow and practicality was less of a priority once more, James soon dived head-first into the world of VAG-group hot hatches, with the likes of a Mk5 Golf GTI Edition 30 and Audi S3 all passing through his ownership. Recently starting his own business at this stage – NXN Auto Repairs & Valeting based in Stranraer – a diesel B8 A4 was promptly snapped up to act as a reliable and sensible company demo vehicle.

“It was a nice car, but I thought that I needed something that would gain a little more attention seeing as it was supposed to be helping me promote the business,” James understandably explains. There was only one thing for it: swapping up the Audi for the much sportier S4 variant of the same generation that would undoubtedly form the basis of a much more interesting company workhorse, especially if it was put under the scalpel as James was intending it to be.

“I wanted it to look as good as it went,” James continues, eager to signify this supercharged V6’s mind-melting capabilities with some more memorable styling tweaks – something we think you’ll agree he’s certainly achieved since! It’s why the best part of the next three years were spent with the car receiving the mother of all transformations, utilising inspiration from places that many owners wouldn’t ever consider along the way.

“The colour choice was that of my daughter, Jenny,” James chuckles – the unusual hue of Audi’s Glut Orange certainly not one you’ll see every day. “I did have a moment of panic when I first saw the car fresh out of paint, but it’s really grown on me now. After taking it to a few shows I’m so glad I didn’t go for Nardo Grey which was my second choice!”

But it’s not just the hue that’s changed on the exterior. Look a little closer and you’ll see the S4 now sports an interesting wide-arch conversion that might initially be hard to place your finger on. While many opt to swap up their A4 and S4 curves for those of the muscular RS4, James once again thought outside the box by taking on a much more ambitious project – swapping up the lines for those of none other than an A4 Allroad.

“My local VW parts specialist must’ve loved me as I was carrying out the conversion; you wouldn’t believe how many little parts and clips were needed to carry it out!” he grins as he shows us how the new aesthetic was created with components like the front and rear wings, front bumper and of course, those bubbly wheel arches all being transferred over from the utilitarian off-roader A4 model of the range. Painstakingly finished up with a custom rear bumper that accommodates the wider dimensions, as well as a couple of other neat touches like RS4 side skirts and that carbon fibre ECS Tuning spoiler out back, and James was well on the way to creating an S4 like the world had never laid eyes on before.

It might seem like an absurd thing to say with a car that’s now bright orange (and understandably referred to as ‘Tango’ by its proud owner), but James explains how ‘subtlety’ was the buzz-word when it came to further styling tweaks to top everything off. There’s no eye-searingly shiny split rims sitting under the new widened arches, for example, but an effortlessly classy set of ‘Rotor’ alloys taken from an RS5 instead. The black leather interior, too, remains nigh-on standard, leaving James and his family an extremely pleasant and functional cabin to work with.

But then we get to the car’s powertrain and, quite frankly, all hell breaks loose. Not content with the 330-odd ponies that were rippling through that V6 motor as standard, James took the opportunity of the car being up on ramps receiving bodywork tweaks to have a go at overhauling the famously tuneable engine to kick out even more power.

First paying attention to that Eaton Roots-style ‘charger, the unit was sent off for a full internal porting that allowed for lower outlet temperatures and the ability to safely drop pulley sizes later down the line. With that in mind, it was then the job of new, smaller APR drive and crank pulleys to really sharpen up performance and throttle response, before more conventional breathing mods such as an APR intercooler and Milltek exhaust system were all brought to the table to help get the most from the overhaul. Now tied together with a sumptuous APR Stage 2 map, James is confident that anywhere between 480 and 550bhp are now pulsating through all four wheels.

One of the best features of the B8 S4 is the fact it’s the very last S4 available with a good ol’ fashioned manual gearbox – something James has made full use of, ensuring those performance tweaks make it a real analogue blast to drive. The six-speed cog shifter itself has been bolstered with a Spec Stage 4 clutch and ECS Tuning short-throw kit to make the whole thing as punchy as physically possible.

It’s the job of some uprated brake discs and H&R coilovers to ensure the Audi stops and handles as well as it goes, leaving James with a machine that performs in every situation just as impressively as it looks, providing him and his kids with an incredibly fun toy to perform daily driver duties in.

When you remind yourself the immensely broad requirements this car has to perform to: acting as both a reliable company demo vehicle that breaks necks and performs to the best of its abilities as well as carrying out the sensible, four-door family duties you’d expect from any daily driver, we reckon James has certainly nailed it with this stonking S4 here. He’s even found the time to ensure his kids’ creative suggestions were included in the modification process, adding an all-important layer of ‘fun’ into the mix that’s missing from so many project cars out there. Just remember that next time you’re on the market for another boring, grey runaround…

Below: The car going through its respray to Audi Gult Orange.

TUNING CONTACTS NXN Auto Repairs & Valeting (search for ‘NXN Auto Repairs’ on Facebook or call 01776 700010), Connell Motorsport (www.facebook.com/connellmotorsport) for all the paintwork that’s been done to the car, Ian at WBS Signs (www.wbssigns.co.uk) for the decals

Above & Below: Factory interior. Below: ECS Tuning High Kick carbon fibre rear spoiler. Left: A4 Allroad body conversion. Above: Upgraded intake system with Ramair Filter Below: We love the festive pumpkin decoration on the bonnet

Dream car? I don’t really have one but I do like the Audi R8 and McLaren P1

Money-no-object project? To build an old ’1949 Dodge pick-up truck using a spaceframe and bits from the Audi RS parts bin!

SPOOKY STUFF Wondering why there’s a large pumpkin adorning the bonnet of James’ S4? We were wondering the same thing until he filled us in…

“I get various decals and liveries put on my car from time to time to make it more recognisable and keep the kids entertained,” he explains with a glint in his eye. “The guys at WBS Signs do all the work for me and never disappoint!”

Clearly set up with the Halloween in mind as we shot the car recently, there’s no denying the impact those spooky stickers have on the overall aesthetic. We just wonder what design he’s going to replace it with…