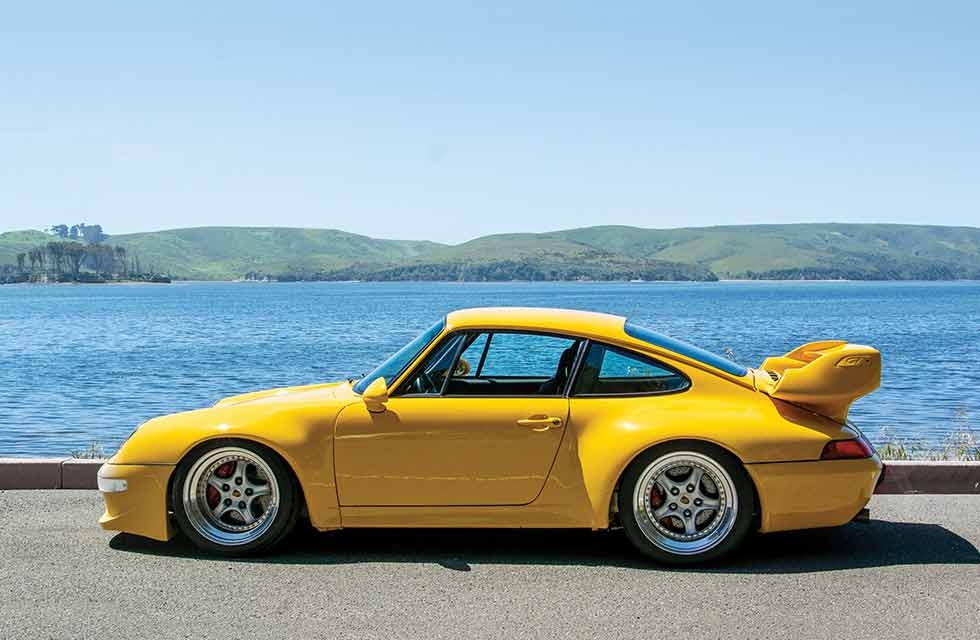 Big Yellow Driving S CAR GO’s wild 993 GT2 homage. You could never officially buy a 993 GT2 in the States, so this convincing S CAR GO built lookalike is anything but, starting life as a 1970 911T. While backdating might be all the rage, these days, this is a case of updating, or forward thinking… Words and photography: Matt Stone.

Authentic 993 RSs and GT2s are proverbial unicorns in North America. They were never officially imported there, and if someone has managed to sneak one in, licence and register it under the United States’ arcane “show and display” grey market imports scheme, they are uber rare and cost, on a per pound basis, about the same as diamonds.

The screaming yellow zonker you see on these pages was reborn out of a ’70 911T by Rob King’s S CAR GO Racing nearly 15 years ago, running a potent, yet still naturally aspirated, 993 engine – so it was more of an RS tribute than a twice-blown GT2 at the time. The entire bodywork was replaced with ultra-light carbon-fibre pieces, including that audacious rear wing. While the car is licensed and ostensibly street legal, it’s not fooling many; as it’s really a thinly disguised racing car that happens to have mufflers and wear a licence plate. Notice those 18in Speedline replica wheels, that look just as do the authentic Speedline modular alloys that the 993 RS and GT2 are born with; the fronts are 10in wide wearing 275 section tyres, and the rears are steamroller-like 13 inchers wrapped in 335 section – take that Countach and Diablo! – Toyo Proxes rubber fore and aft. King and company worked hard to get the details right, including 993 door mirrors, and lots of other OEM or OEM style bits that’ll have you looking twice.

Inside you’ll find bespoke instruments that keep tabs on everything that runs, charges, cools, makes noise, heats, or pumps. The interior is all business, with blank off plates where would have been audio and HVAC system controls. The seats are lightweight, thinly upholstered Sparcos, and the steering wheel a Porsche Motorsport three-spoker.

Replacing the old mono band Blaupunkt on the dash are the actuators for the on board fire extinguisher system, and a GReddy performance computer plus race spec switchgear. The instrumentation is also white faced custom pieces. And the roll cage structure is serious; made of massive tubing and completely bespoke, it extends deep into the engine bay and ties in to the rear shock towers, the floor and several other places…making any discussion of chassis rigidity a chunter. There’s a genuine ’70 911 monocoque here, but this massive structure serves to make the car, for all practical purposes, a tube framer, with Porsche floors and cabin structure, with composite body attached. This massive tubular structure extends across the lower sections of the door openings, up and around the window line, and across the passenger compartment just below the dash at about knee level. Yes, this car is triangulated about 40 ways to Sunday. Or next year. No chassis wiggle here. Ever.

Big Yellow, affectionately nicknamed Rumbah, also packs a large front oil cooler, big 993 Turbo brakes and ducted front brake cooling, and all in this screaming yellow zonker weighs about 1100kg. The lightweight carpeting and other interior work was done by Franzini Brothers Upholstery and Restoration, plus Whitman Auto Body smoothed out the now all carbon bodywork and applied the Speed Yellow paint job. You’ll recall we said that when built, Rumbah ran an aspirated 993 engine, but current owner Ken Carpenter, of nearby Lafayette, California, wanted so much more. So off and out went the stock intake tract, in favor of a mostly bespoke twin turbo set up. The snails are K16 turbos running larger, modified wheels on the intake side. All of the intake plumbing and manifold work was hand-fabbed by S CAR GO. As were the headers and exhaust system, designed and built expressly for this installation. The mufflers are MagnaFlow, and the engine management system and tuning are also bespoke. King and Company also fabbed up the outdoor gas grill sized twin intercooler system.

This not so subtle dash of “so much more” completes the GT2 tribute myth, and amping horsepower up to around 600. The G50 is backed by a multi disc racing clutch. There’s no leather trimmed center console either, just a business-like shifter with all of its aluminum shiftgate bits proud and visible. It takes some considerable suspension to get all that power to the ground, and work in concert with the massive rolling stock and beefy brakes. A double adjustable coilover suspension system mounts Fox dampers front and rear, with tubular lower control arms up front. The much racier suspension allows the contact patches to stay put, and the untwistable chassis rigidity to keep everything precise, yet the shocks are tuned for a palatable street ride – call it well controlled compliance.

It takes a bit of wiggling to get torso settled into the car, as the seat is direct mounted to the floor with no fore or aft adjustment, and measured to fit the owner’s dimensions. But we make it, and buckle tight into the multi-point racing harness belt system. The curvaceous front wings, wide rear hips and big rear wing dominate the view out the front and in all mirrors, again striking how this could have all begun life as a narrow-bodied chrome bumpered 911T. But the transformation is effective; no rough edges, mismatched panels or random rivets to be seen; even all the lighting looks proper 993. Taking in the view of the special instrumentation, all business dash and fire system, you’ve little question you’re in a race car.

The engine cranks with the usual 911 starter sounds, and grumbles to life with a deep chuffy idle. The clutch depression is light, and dialling up first gear feels little different than in any Carrera 3.2. Until you massage the go pedal and feather the clutch for takeoff. The very racy clutch stutters a bit, and it takes some work to master a clean takeoff. Yet even at low revs, the engine has so much torque you can declutch just a hair until take-up, then feed in the throttle. It’s fine once you get it. Even at modest throttle, it seems like you trip through first gear in an instant, and it’s time for a very normal feeling shift to second. Now more and deeper throttle and the boost feeds in with an intense pull. You wouldn’t call it a “bang” but it hits hard and rearranges your lower internals a bit with a high octane mix of boost, torque, building horsepower and g-force. Third gear is the do it all ratio; you can trundle along through in-town traffic quite comfortably in third with no bucking, coughing or a lack of grunt to pull you back up to speed. Get hard on the gas and you’re heading for 100 mph as fast as your head can process it. Up to fourth and hard on the gas again, and the relentless pull continues. As you might expect given the nature of biturbo installs, there’s little meaningful turbo lag, and plenty of response. Fast? Crazy fast. Yet power is nothing without control. The steering is weighty, no surprise considering the track and wide footprint, yet not overly so, and there’s still ample feel as to what the front end has in mind. S CAR GO’s Porsche trained and certified master tech Pat Wells, has wrenched on Rumbah, tested it extensively, and driven it hard, said “due to the suspension set up, and the more than foot-wide tires on the rear, you really don’t have to worry too much about off throttle oversteer with this car because the back end really stays put, I’ve never been able to get the tail loose.” So that’s one old 911 Turbo foible you don’t think much about in this car. It really corners, and feels utterly planted at all times. Plus, of course, 600 horsepower in a 1100kg car makes Rumbah barrel-of-monkeys fun to drive – just do the maths. At the wheel, you’ll feel like there’s few if any corners you can’t handle, and with that kind of power, nothing you can’t pass. Fortunately, the underbits are not so tightly wound that all notion of streetable ride evaporates. It’s firm, stiff even, but not insufferable as you might expect of what is in essence a racing car with licence plates on the road.

The notion of “street legal race car” is bandied about all too fast and loosely, but it really fits Rumbah. It’s got the power to excite, thrill and to outrun many legit track-only machines, and the suspension and brakes keep it manageable. And it’s just stupid, crazy, silly, thrill fun to drive; so at what price fun? Speed costs money, so how fast do you wanna go? King can’t put a figure on the pounds of silver invested in Rumbah over its initial build, then massive powertrain upgrade, plus previous and current owners’ whims and wishes. It’s safe to say that a couple of hundred grand isn’t an unreasonable estimate, depending on the car you started with and how far you wanted to go. Unless you have a Porsche shop, tools, skills and skilled staff like Rob King’s in your back yard.

Unfortunately, we didn’t have a legit Porsche 993 GT2 along for the ride, or the chance to do any kind of meaningful comparison or instrumented testing, but save that, we’d say that Rumbah is about as close to the real deal as one (outside of Porsche itself) could get or build.

Above and right: Check out the pipework. This GT2 replica is virtually a spaceframe, with chunky roll cage connecting with all suspension pick-up points.

Taking up residence in S CAR GO’s San Rafael workshop which, we recall from our previous visit, is a feast of Porsche goodies.

Normally aspirated 993 engine has been breathed on with twin K16 turbos and massive intercoolers. Power is around 600bhp.

Hard to believe that this Porsche 911 GT2 993 Replica started life as a 1970 911T. Lighweight bodywork is nearly all carbon-fibre Low rider! On the street it’s firm but fair on Fox coilover suspension.

“All in this screaming yellow zonker weighs about 1100kg”