Romania is one of the more culturally diverse countries of the European Union. This is largely thanks to its interesting geographical position, sitting as it does right in the confluence of Central, Eastern and Southeastern Europe. It has hilly Moldova to the east and cosmopolitan Hungary to the west, fertile Ukraine above and pretty Bulgaria below, and it’s this rich and heady stew of influences that’s allowed Romanian culture to evolve into an aspirational blend of art, literature, sports, music and cinema. 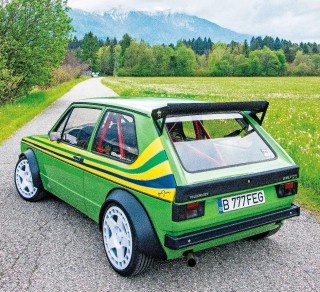 It’s also a place where you find all sorts of extremely cool car builds, so we were a little surprised when we had a quick scan through the archives to realise that the Golf you see here is, in fact, the first Romanian car to feature in PVW. (We think… abuse, threats and evidence to the contrary to the usual address, please.) And as you can see, it’s a car that acts as a perfect distillation of the country from whence it grew: its fusion of styles and approaches appears truly pan-European, but thanks to the passion of its owner and builder, Nicolae Moldoveanu, it’s trueblue Romanian through-and-through.

It was an early enthusiasm for motorsport that first sparked the fire in his affections, although it did take a little while for the whole VW thing to catch on. “I loved watching F1 and the DTM when I was young, and the BTCC was always my favourite championship,” Nicolae explains. “I’ve always been around cars too, right from an early age – my father used to buy, restore and sell old cars for profit here in Romania. The first one I really fell in love with was a Mercedes-Benz 190E 2.3 W201 Sportline, and after that came a lot of Opels, Mercedes and BMWs.”

So where did the Dub thing come from…?

“When I was at college, the idea of building a Mercedes-Benz 190E W201 or E30 BMW didn’t really tally with my budget,” he explains. “The most affordable project cars at the time seemed to be Mk1 and Mk2 Golfs; I chose a Mk1 because of the lower weight.”

It’s not actually quite as mercenary as it sounds, as Nicolae had always harboured an affection for the Mk1 GTI, and it was a dream come true to be able to buy one of his own… even if there wasn’t much of it beyond a shell when he first got his hands on it. Coming from a base of having a Lada 1200S as his first car back in 2004, before moving onto a Mk1 Golf GLS project, this all felt like a natural progression. The 1.3-litre GLS had received the full GTI makeover treatment along with a 1.8- litre KR 16v engine, with all the work on the car being carried out by Nicolae along with his two best buddies, Stefan and Bogdan; with all this achieved, he was champing at the bit for more. “I’d always wanted a GTI, due to its heritage in the automotive industry, and of course the sporty drive,” he continues. “I bought this car from a friend. In fact, he’d bought it after I got my GLS, and the engine in my first Golf came out of this one! Ten years later I ended up buying the rest of it…” 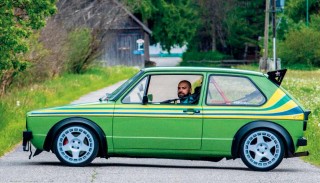 This chapter of the story may have a whiff of the fairytale about it, but in fact the GTI was pretty terrible when Nicolae dragged its carcass home. The shell was faded, rusty and badly dented, whereas the rest of it – well, that was non-existent. No engine, no interior, no nothing. A perfect blank canvas then, right?

“The Golf started out as a white 1979 GTI with a DX engine, K-Jet fuel-injected,” he explains. “Daniel, the first guy who had the car, took the 8-valve engine out and fitted a 16-valve KR motor, which he never managed to get running – so eventually I bought that engine. The body stood outside in a courtyard for around eight years, before being bought by another friend of ours who had plans to turn it into a hillclimb car with a G60 engine. That project was abandoned too, and the shell stood for another three years outside until I made up my mind on the car. It was basically just body filler over rust by that point!”

This is clearly a fella who relishes a challenge, however, and after a protracted session of parts-hunting and shopping, he rolled up his sleeves and, flanked by Stefan and Bogdan, set about seeking out the swan within this improbably ugly duckling.

“Most of the ideas throughout the build were inspired by motorsport, but also a certain hardcore Swedish Mk1 is saw”

The body took a lot of work, cutting out the rust and letting in new steel, panel-beating straight and so on, and the finished product is testament to what must have felt like endless long days and late nights swearing at recalcitrant 1970s metalwork. Every single component throughout the chassis is either brand new OEM parts or carefully selected aftermarket upgrades; everything from the steering column to the fuel lines and beyond is fresh and stamped with VAG part numbers, but of course this was never intended to be an exercise in concours restoration. The photographic evidence here kinda bears that out really, doesn’t it? 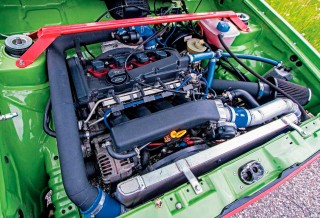 From start to finish, the build took around three years – and as you can see, a significant portion of that time was gleefully poured into the engine bay. “The engine was built by Laslo Mario in Romania, with parts provided by GaragePlayers,” says Nicolae. “Laslo is one of the best car builders in the country, he has built multiple championship-winning cars – hillclimb, rally, you name it. And GaragePlayers? That’s a group of friends who grew up in the ’90s on a diet of car magazines.” The motor itself is an AGU 1.8T, hoiked from a ’1999 Mk4 Golf, and now it’s wearing a custom BAR-TEK head with Audi R8 TFSI coil conversion; a K04-023 turbo sits above a bespoke GaragePlayers downpipe, the soundtrack dramatically enhanced by a full 3” Supersprint Group A exhaust system. Nestling deep within the dark bowels of the engine are a set of forged Mahle pistons with BAR-TEK rods, and all of the digits are knocked into order by a Haltech Sprint 500 ECU. The upshot of all this is a healthy 270bhp on pump fuel, rising to 310bhp when Nicolae chooses to brim the shiny new tank with race juice.

“The engine was built by Laslo Mario who has built multiple championship-winning cars – hillclimb, rally, you name it…”

Naturally there’s a Quaife LSD to stop all of the torque simply breaking the driver’s wrists, and with the power being effectively deployed it’s reassuring to note that every individual upgrade throughout the chassis has been carefully considered too. KW V1 coilovers keep it all in check, while also neatly tucking those 17” Fifteen52 Turbomacs up inside the wideboy Group A arches; chosen to fit into the rally theme, the wheels were ordered direct from Fifteen52 UK and they totally look the part. The hillclimb scene is massive across continental European, and this Berg Cup-influenced aesthetic ticks a lot of boxes.

“With all of this extra power, obviously I needed some better stopping power too,” Nicolae grins. “I decided to build a custom setup using lightweight 4-pot front calipers from a Porsche 964 with 288mm discs. The master cylinder is also from the 964, with a Mk2 Golf servo, Mk2 Golf GTI rear brakes, and Wilwood lines.” It does the job and then some, providing just the sort of devastating retardation you’d hope for in a 270bhp pocket-rocket that weighs about the same as twenty Bensons and a pint of mild.

“Most of the ideas throughout the build were inspired by motorsport,” he goes on. “A few years ago I saw some pictures of a hardcore red Mk1 built by some crazy guy in Sweden, which gave me a lot of ideas and spurred me on to create a full race-spec build.” This explains the interior treatment, which is pleasingly bereft of anything besides that which is strictly useful; a Wiechers rollcage frames the scene, whereby we find a pair of Kevlar Recaros, harnesses and nets, along with an imposing CAE shifter and RRS fire extinguisher system. All the soundproofing and carpets are demonstrably absent, although Nicolae’s no heathen and he appreciates the addition of a few superfluous grams in the name of pleasantness, hence why a custom headlining has been made up in Alcantara. Impressively the dash, steering wheel and speedo are the car’s original 1979 items, some of the very few parts that actually came still attached to that rusty shell, although logic dictates that there’s now a whole world of other gauges in there; a full suite of Stack dials comprising boost, oil temp, air-fuel ratio, water temp and oil pressure. That angried-up 1.8T is as strong as an ox, but in the chaotic maelstrom of competition it makes sense to keep a close eye on it.

“It’s mental in there,” he grins. “I love the feel of the car, with all the sounds powering through the interior.” And this manner of euphoria all serves to accentuate just how eager Nicolae is about car culture in general; after all, this is an obsession that’s been building up throughout his entire life. “It’s a fascinating world where you get to tie friendships with people who are passionate about the same piece of iron as you,” he beams. “People who, even though they don’t know you, are greeting you in traffic just because you’re driving a similar car. How do you not want to be surrounded by these people?”

He’s got a point. It’s not just a hobby, it’s a lifestyle, and this outrageous Mk1 is a key identifier: from its high-spec engine build to its poised chassis, to the overall track-ready vibe (including that custom rear spoiler, built to Nicolae’s own design by an O.G. in the scene), this car is the perfect accompaniment to his real-world affections. You can feel its resonance shimmering from the Carpathian Mountains to the Danube Delta – a Romanian VW build that’s truly world-class. 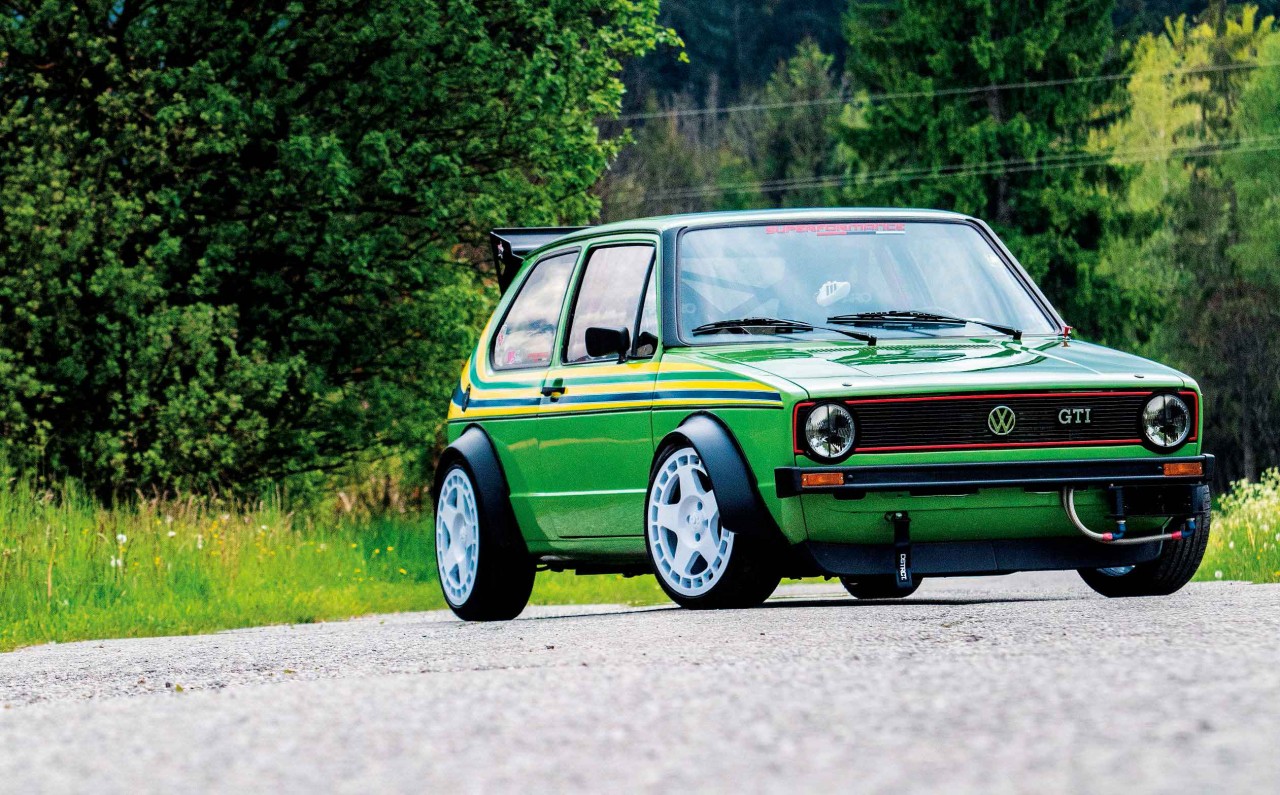 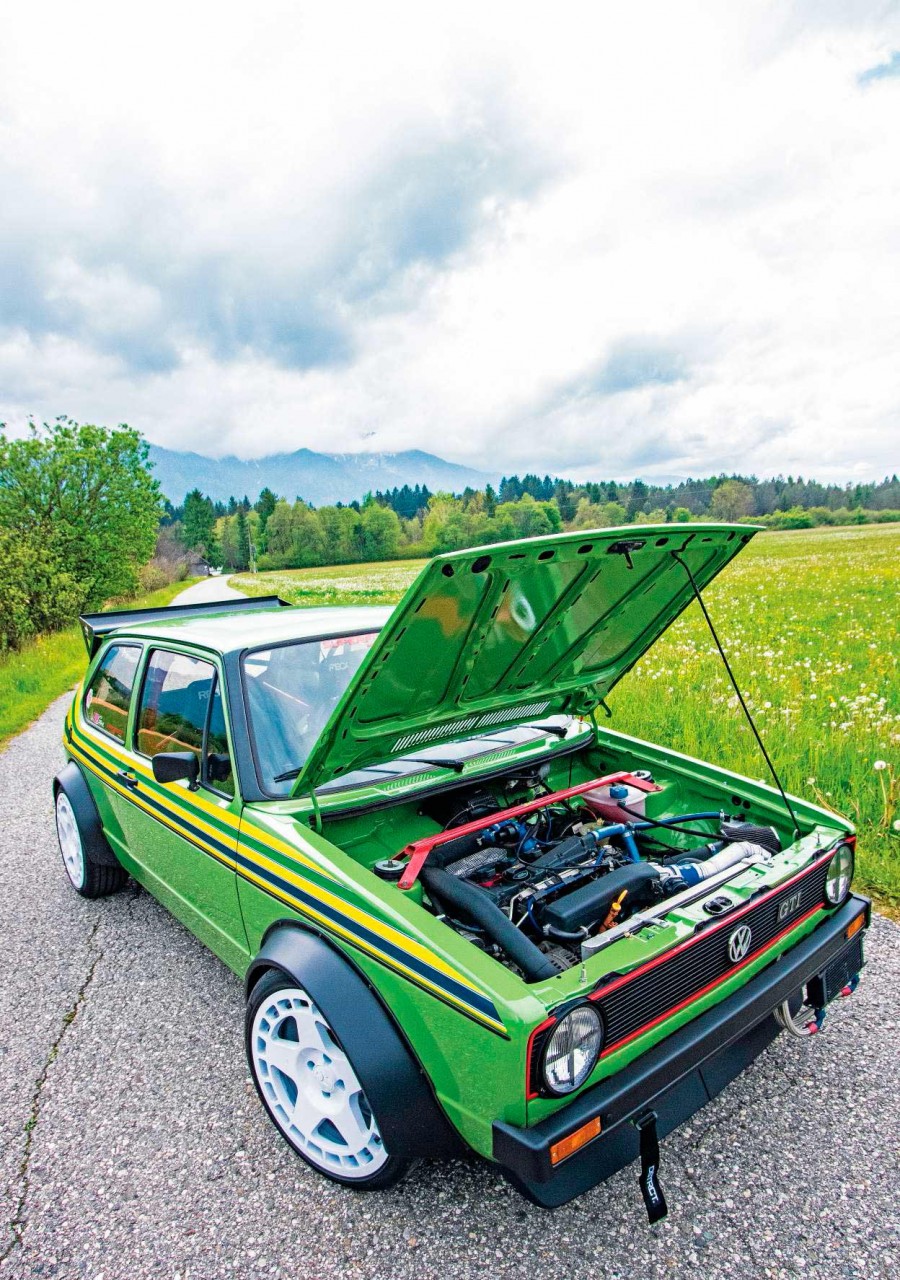 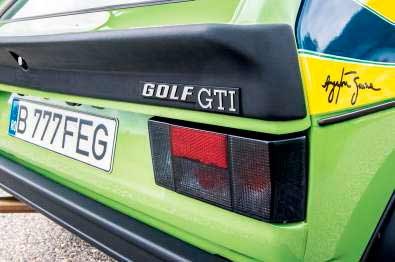 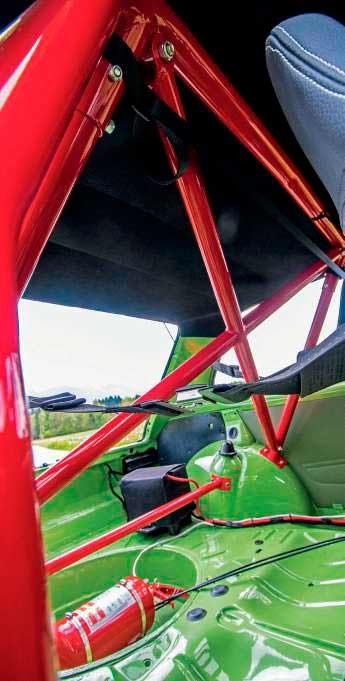 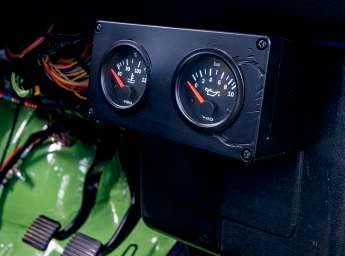 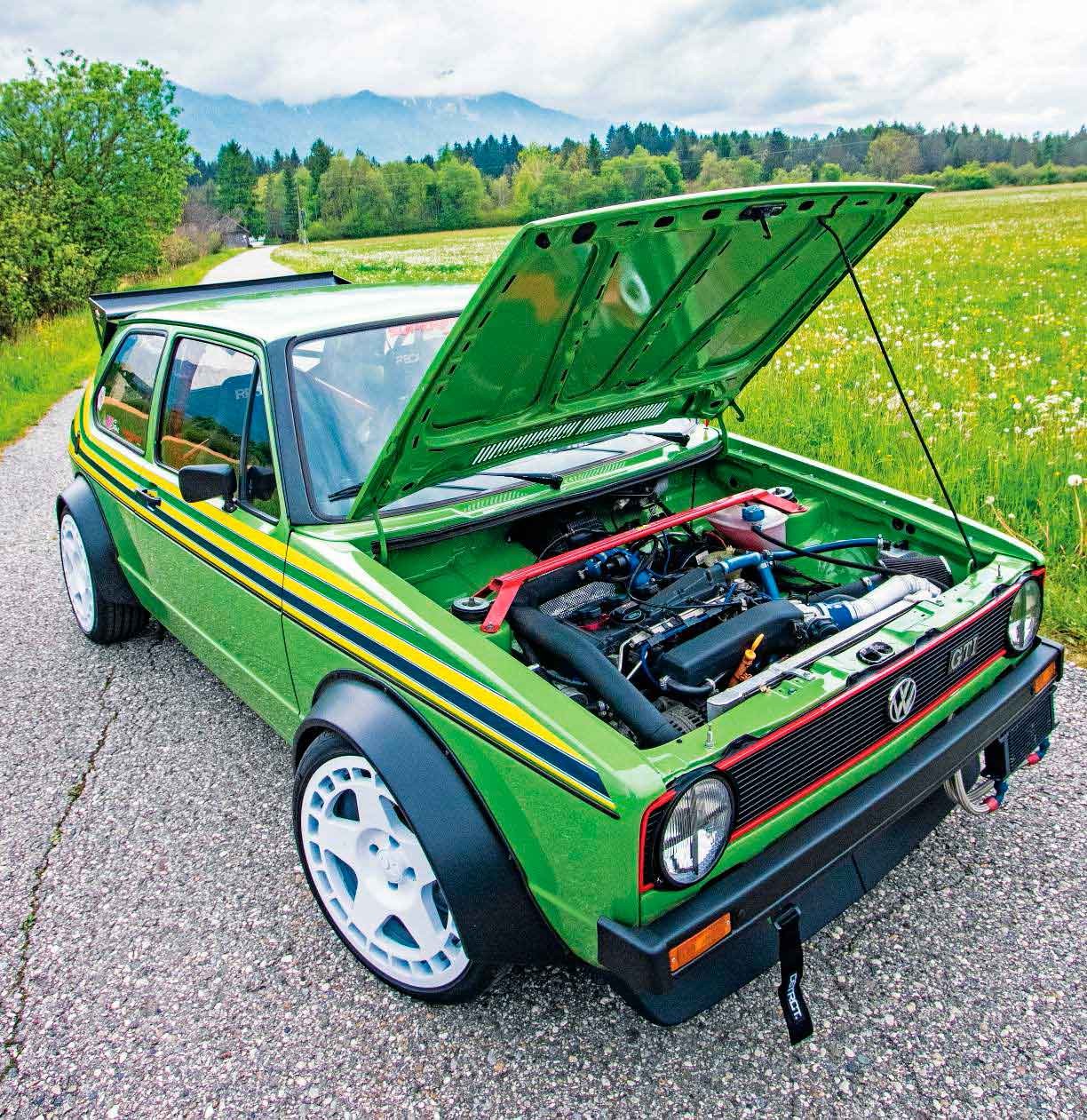 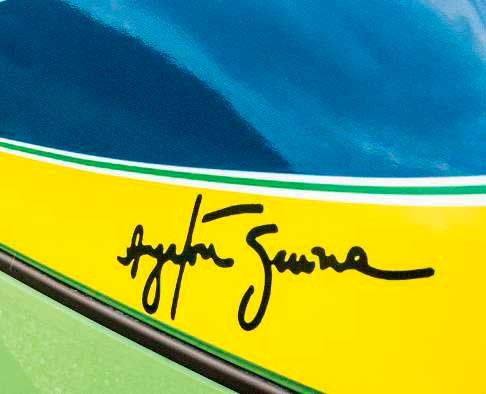 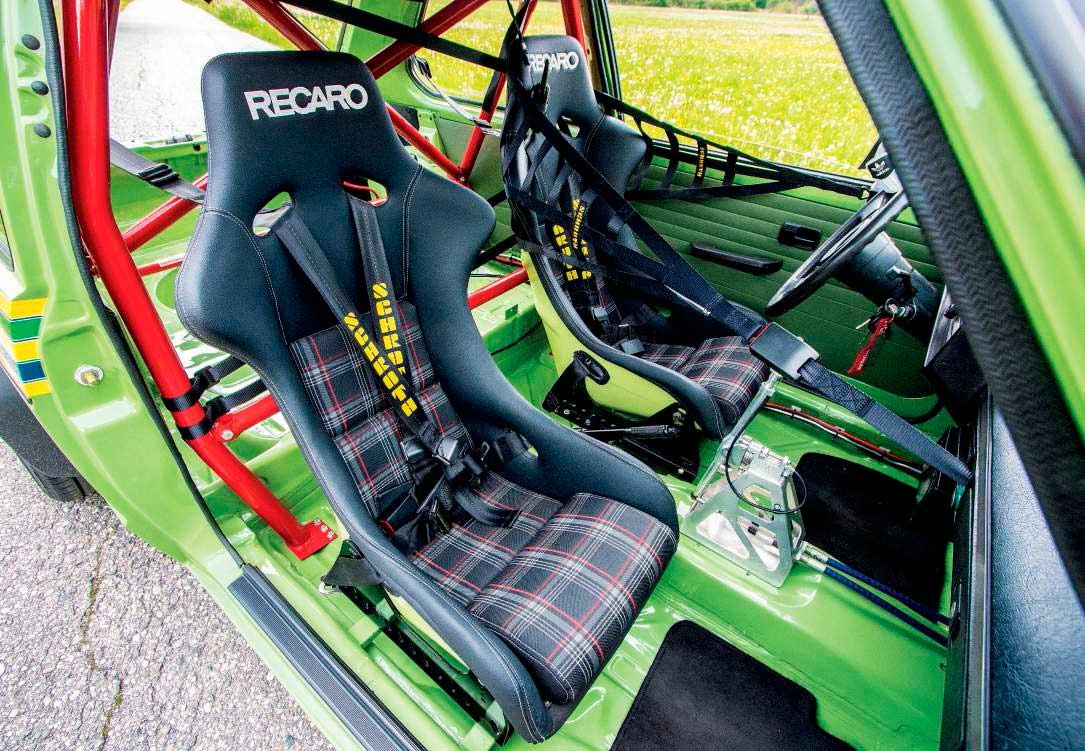 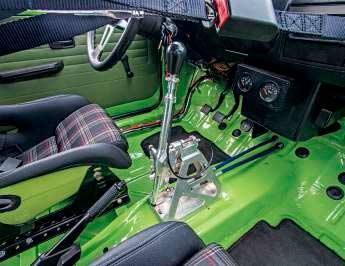 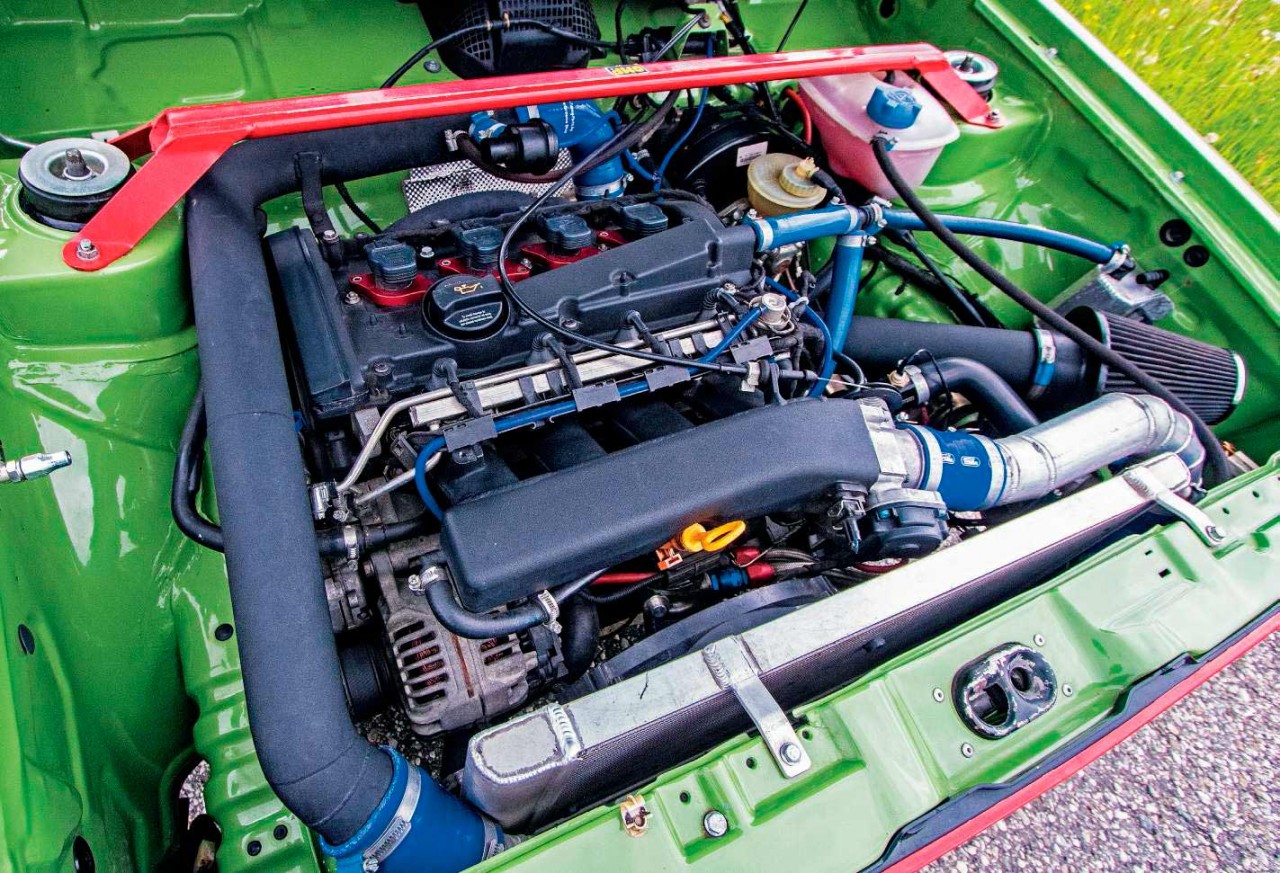 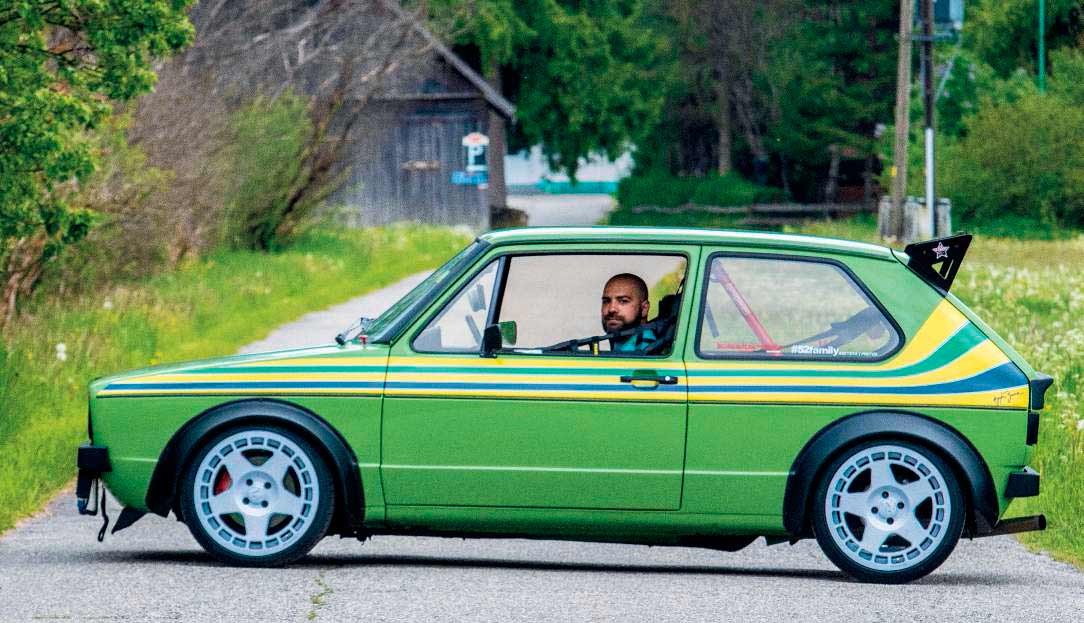 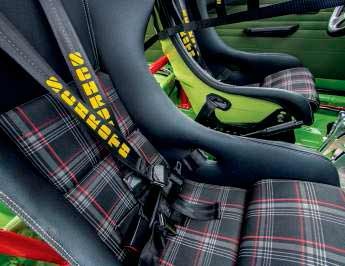 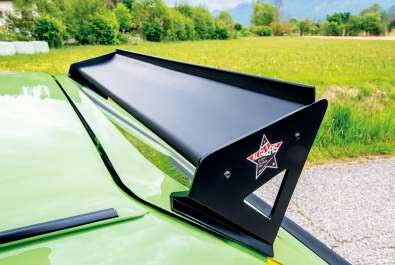 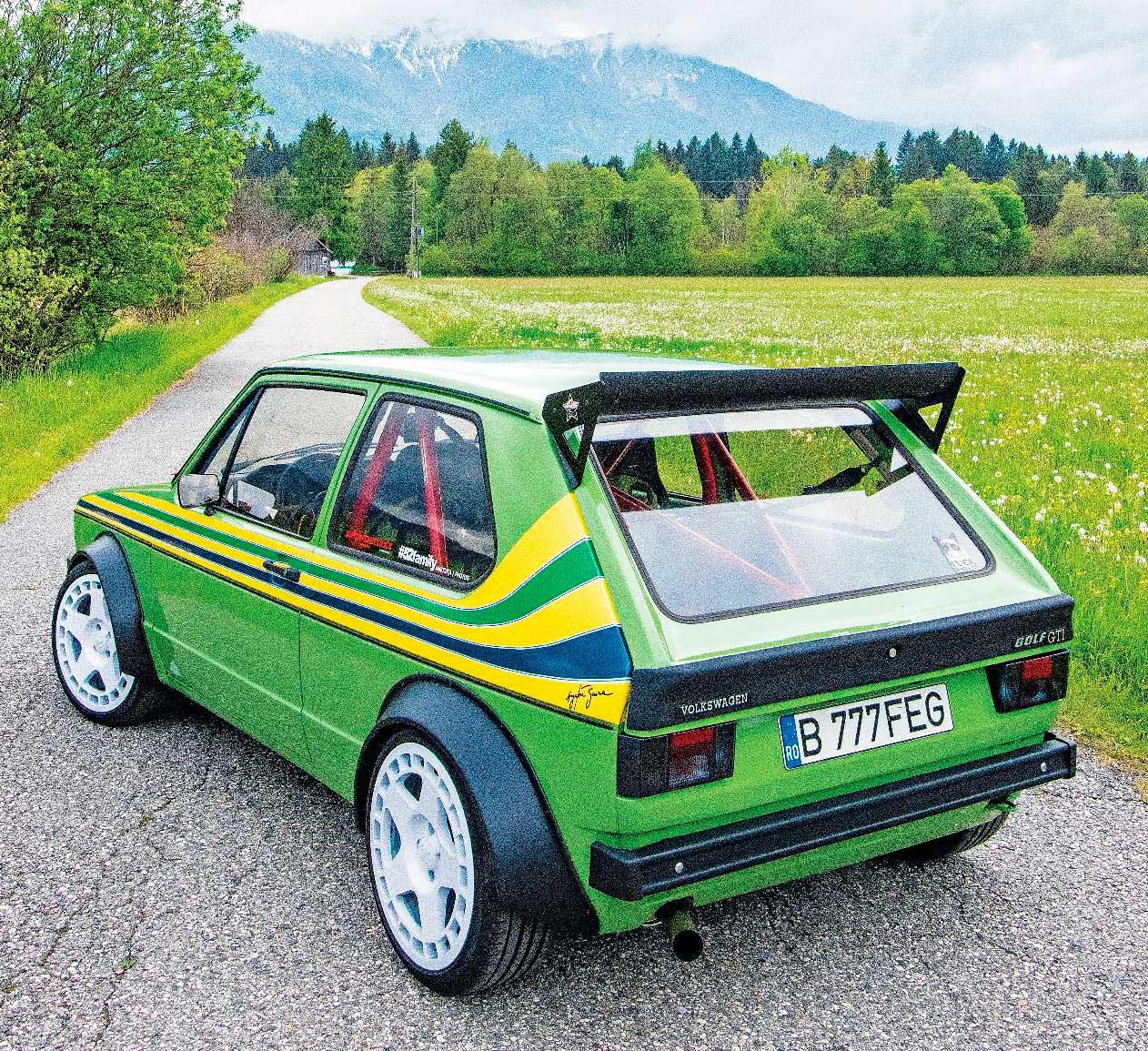 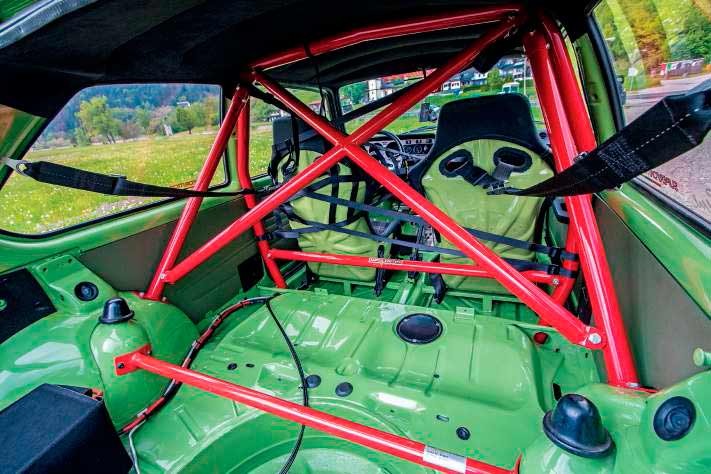 Those who know will tell you 300bhp through the front wheels of a stripped out Mk1 is all you’ll ever need! Those with a keen eye will have noticed that the car’s striping pays homage to the late, great Ayrton Senna’s crash helmut.

SHOUT: GaragePlayers team: Stefan Putaru, Bogdan Tanase, Nea Titi, Nea Misu; Bibi from Superformance for setting up the ECU; Mario for building a strong engine; and to my beautiful wife Amy, my wonder-woman who understands my passion for this car and takes care of Damian and me