Where do you see yourself in ten years’ time? We all like to think we’ve got the next chapters of our lives at least partially sussed out, but as you’re probably only too aware, things don’t always unfold as we anticipate they will. 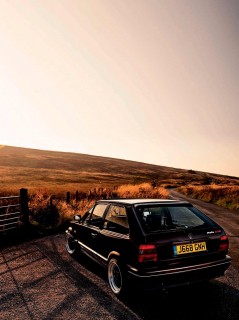 An unexpected twist or turn along the way doesn’t necessarily spell bad news, though. Take Dub addict Nick Braddock here as a prime example – a man whose vivid automotive plans have evolved over time to produce results far more exciting than he’d originally hoped for. “I learnt to drive in my Mk2 Polo Breadvan and have always been mad on VAG cars,” the insurance underwriter and music producer tells us. “I had a few more Polos and Golfs after that, but have always thought the face-lifted Mk2 Polo Coupe was the very best-looking VW I could own…”

This heavily-revised version of Volkswagen’s second-gen compact hatchback – dubbed the ‘Mk2F’ – arrived at the start of the ‘90s, bringing with it a raft of tweaks such as that radically altered front end, a more slippy silhouette and, perhaps most importantly of all, the official production run of the supercharged ‘G40’-badge model (only seen in very limited numbers before this time).

We next catch up with Nick in 2001, as he was slowly working his way up the car ladder with his sights unsurprisingly set on one day owning a Polo G40 of his very own. Problem was, he was only in his early twenties at this stage, with a budget that would no way stretch to this fabled hot hatch. Luckily, there was a solution…

“I bought this Polo GT Coupe instead – it was the next level down in terms of fun so seemed like the right choice,” he explains. “It looked the part but I was always set on getting a G40 eventually.”

Visually at least, the 1.3-litre Polo GT Coupe shared a remarkable number of components with the boosted G40, such as that swooping boot lid line and those chunky arch trims – providing Nick with a fantastic-looking runaround as he knuckled down and gradually added to his G40 piggy bank.

“It tends to get locked away out of season, only seeing the light of day for shows and the odd weekend blast” 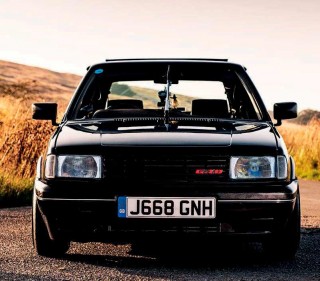 As you might’ve gathered by now, though, things soon took a slightly unexpected turn. With prices of genuine G40s only rising as their iconic status developed, and with Nick genuinely falling in love with his GT Coupe over the years, he quickly realised his mighty little car might be sticking around with him a little longer than he first thought.

“Having stored it in my dad’s garage for ten years, I knew I couldn’t even dream of selling the Polo,” Nick admits. The plan instead? To use the car as a base to create the stonking G40 he’d always promised himself.

“I’m proud of my Audi chrome sunroof wind delector. I haven’t seen this done before”

With many G40s rotting out, twisting subframes or generally just becoming incredibly rare, a lot of owners had resorted to doing something very similar to Nick by this stage: swapping all the special bits over to a decent GT Coupe base car which, as we’ve already touched on, shares the majority of components with the fruity ‘charged version. 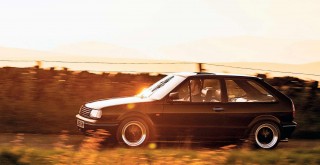 Snapping up a G40-spec engine as well as matching clocks and badges from a forum, he soon got to work making his Polo a whole lot more special. Interestingly, even the engine itself was less hassle to transplant than you might expect – the GT Coupe’s wiring loom virtually ready to accommodate the supercharged engine in a ‘plug ‘n’ play’ manner meaning the task is a lot less fiddly than it could be.

Nick wasn’t simply aiming for a factory-spec G40 with this build, however, with plenty of modifications thrown in to ensure his pride and joy is both more unique and formidable to pilot down a twisty B-road than the majority of its peers out there.

It’s why the G40 motor now boasts a smorgasbord of delightful old-school tuning tweaks that means over 170bhp is available through those front wheels. To start with, a ported and polished head with more a more lairy cam, as well as a freer-flowing throttle body and inlet manifold, mean that airflow is at the very optimum for performance gains. There’s also a beefier intercooler and fuelling system, as well as the all-important raspy exhaust to complement the whining supercharger noises that are emitted from up front.

Talking of that supercharger, this ain’t no standard G40 G-Lader unit either. It’s actually to JabbaSport’s ‘R1’ specification, meaning the internals are ported and polished, with more aggressively-cut vanes to ensure it’s far more efficient than the factory item it’s based on. With an honest manual gearbox and about the same amount of mass as a bag of sugar to lug around, it’s no wonder the overall results of this fantastic powertrain are nothing short of addictive. 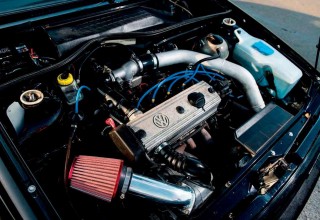 Instead of upgrading to G40-spec chassis and braking components, Nick’s leapfrogged to the likes of a Polo Performance Parts lowered and stiffened subframe, GAZ adjustable coilovers, and more formidable EBC discs and pads. Each corner is then topped off with what he admits is by far his favourite aspect of his ride: those three-piece OZ Turbos that look nothing short of perfection with their body-coloured faces.

Sticking with the aesthetics department, the Polo has also been given a full restoration and respray in its Deep Black hue in the capable hands of SB Autostyle, with subtle, period-perfect touches like colour-coded bumpers, a de-badged grille and a single-wiper conversion taking us back to the tuning heyday for cars of this generation. “I’m also particularly proud of my Audi 80 chrome sunroof wind deflector arms as I haven’t seen this done anywhere else before,” Nick adds with a grin.

As the GT Coupe comes with G40-spec seats as standard (albeit with a different trim), Nick simply had to get his pews re-stitched in black and grey leather to look the part. There’s also a MOMO steering wheel and gear knob combo, as well as Nick’s custom concoction of volt and boost gauges cleverly housed in the centre console and on the dashboard respectively.

Throw in the all-important ICE system and it completes this nostalgic delight of a cabin. It’s been a long time coming, so you’d imagine that Nick now takes his stunning creation out for a spin at every given opportunity, right? Not exactly… “With its coilovers and custom anti-roll bar blocks, it handles well and goes like a dream,” he reveals. “But with it being so important to me and quickly becoming a classic, it tends to get locked away out of season, only seeing the light of day for shows and the odd weekend blast!” 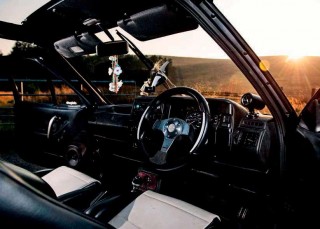 It’s never going to be a legit G40 on paper, but with the long and winding relationship this car’s had with its owner so far, as well as all of the hard graft that’s been pumped into it over the years, Nick’s GT Coupe is understandably a far more special proposition in the eyes of its owner these day.

“It’s just how I envisioned it to be from the moment I decided to keep it and start working on it,” he proudly says. “There are still plenty of little bits to sort out before it’s perfect, but it’s getting there!” You take your time, Nick, because if one thing’s for certain, it’s that this Polo will be sticking around for a while longer yet… 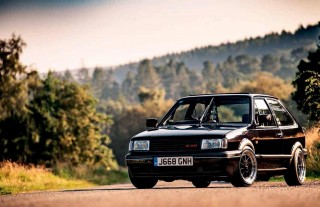 SHOUT: POGO Performance, JabbaSport, Performance Polo Parts, MaxRPM, Richard West for the gearbox and ARB blocks, R-Ace Motorsport for the GAZ coilovers, Chris at Garage87 for a lot of help on the project, Steve from SB Autostyle for the bodywork and paintwork, Ged at S&N Cheadle for the detailing, my dad for keeping a head of hair over the years that it was stored in his garage, Nick Sighe for supplying the replacement engine, the support from the team at Modified North West and Club Polo