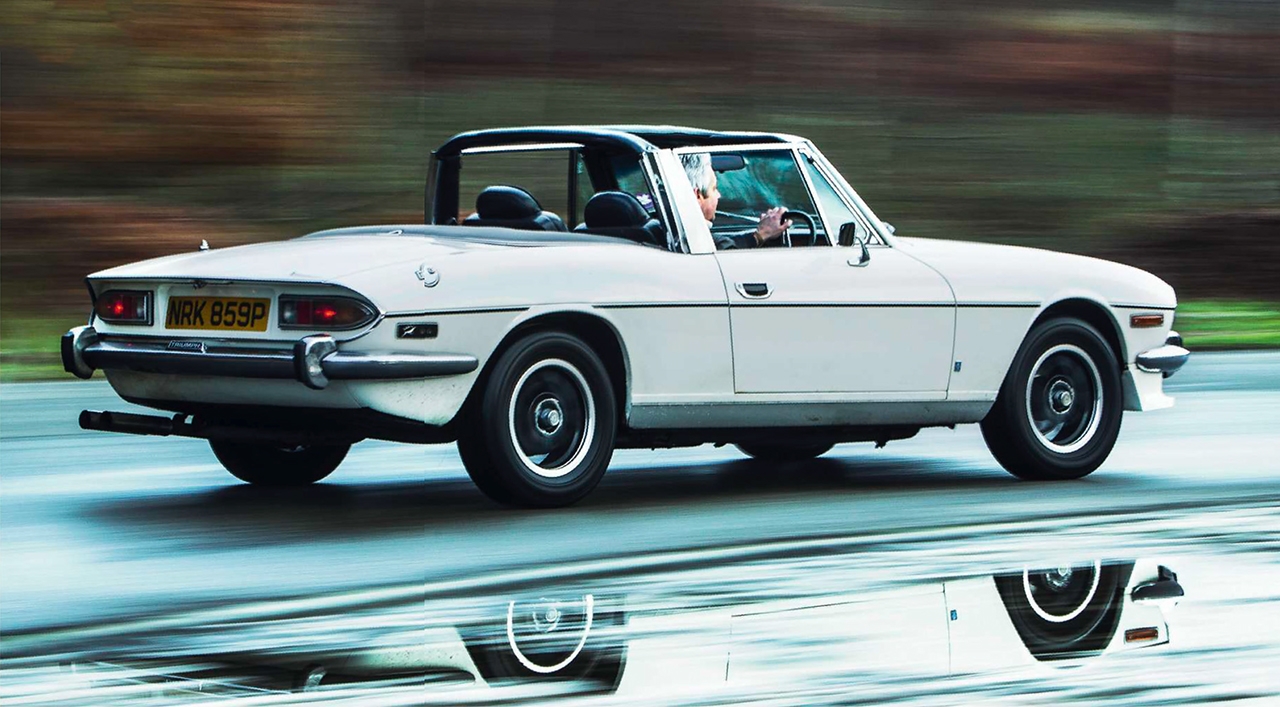 Triumph Stag – test-drive. When the E-type was launched in 1961 Jaguar was an independent company. But by the time our prospective customer was stalking showrooms, a buyout by British Motor Holdings followed by the creation of British Leyland saw Jaguars sharing showroom space with Rovers and Triumphs. From 1970, the last E-type Series 2s would have been rubbing wheelarches with the new Triumph Stag.

Our man would have noticed that at £2200 it was £150 cheaper than an E-type, and while the Stag wasn’t quite as quick, with 0-60mph coming up in 9.7 seconds and period road-testers divided as to whether it wafted to 120mph or went on to brush 130, he probably wouldn’t have minded as the salesman gestured him into the driver’s seat, where he would encounter comfort unheard of in the E-type. And then there was the all-new three-litre V8, burbling seductively like a motor-launch.

Pull away and the Stag instantly feels more civilised than its rivals here thanks to a tall, upright windscreen and proper steel-framed, wind-up windows that make it feel more like a saloon with a huge sunroof, rather than a typical roadster.

It may have been priced to compete with these roadsters, but Triumph wanted it to inhabit a world of deep-pile sophistication. Imagine a cut-price Mercedes SL or Jensen Interceptor, flitting effortlessly from marina to ski chalet, rather than a frivolous bit of cheap, roof-down fun.

Triumph prioritised comfort, as did most Seventies car buyers. Engine’s basic design is similar to the four-cylinder unit used in the Dolomite and TR7.

As the statistics suggest, it doesn’t gather speed like the E-type, but this doesn’t seem to matter once the V8 starts to sing. With its three-litre displacement it’s hard to compare to anything else. It doesn’t grunt and bellow like a Maserati or Corvette. Instead, it manages to combine the thoroughbred thrum of an Aston Martin DB-series twin-cam with a mellow, regular off-beat that’s smoother and much more civilised than any American small-block, hinting at refined potency. The result is one of the world’s best-sounding engines. Coupled to an automatic gearbox, it avoids being strained and breathless as well. In a word, it has class.

It’s easy to imagine the kind of holidaying couple always seen in Stag adverts wafting past a grimacing, wind-blasted E-type Roadster-driver on a motorway with smug grins on their faces. It has proper, adult-sized rear seats too – not something any of its rivals can offer. Both high-speed ride and roadholding are superb and reminiscent of a Mercedes, a result of 185/70 R14 tyres and supple springing and damping.

Unfortunately, Mercedes comparisons continue into the corners. The combination of front MacPherson struts and rear semi-trailing arms is not dissimilar to a contemporary R107 Si’s, and while cornering roll isn’t quite so extreme as the built-for-comfort Panzerwagen, it never feels as well-balanced as the E-type. Understeer is quickly followed by oversteer when pressing on through wet hairpins, and while it’s always easy to catch thanks to light, delicate power-assisted steering, I can’t shake the knowledge that the Alfa Spider and Lotus Elan maintain their composure in situations where the Stag would be a bit of a handful.

However, the same could be said of contemporary Jensens and Aston Martins. The Triumph Stag’s appeal lies in the way it tries to straddle the worlds of the aspirational Seventies jet-setter and the traditional British sports car set.

Sadly, this car’s aftermarket front spoiler is testament to another aspect of Stag ownership that our man would have been blissfully ignorant of in 1970 but all too aware of by 1971. This adornment was designed to channel more air into the inadequately small radiator. Within a year, thanks to a too-infrequent service regime in the owner’s handbook and often-careless build quality that left electrics improperly wired and casting sand in the engine blocks, buyers were complaining of silted-up radiators, boiling coolant and snapped timing chains.

Adding insult to injury, the American market never really understood it. Outgunned and undercut in the muscle-car stakes, it was belittled in an infamously snooty Car & Driver road-test that poured scorn on everything from its marketing to its mechanical specification, calling it ‘a car for someone who has never owned a GT’ and even chortled at the thought of ‘Gran Turismo’ being pronounced in a Coventry accent. Jaguar never suffered this kind of humiliation. Someone with a Corvette on their shopping list wouldn’t have looked at it twice.

However, one thing is certain. Had our man driven it as an all-new car in 1970 and decided that practicality and comfort was more important than raw speed, it’s unlikely he’d have looked back. The Stag makes the E-type Roadster feel prehistoric.

So, was the E-type bettered by its real-world opposition? It depends on what the buyer wanted to use it for, but by 1970 it was ferociously dated, and what once looked like a great all-rounder now seemed to be an awkward compromise. It’s tempting to suggest the Stag succeeded, given the way its sheer effortlessness makes the E-type seem almost obtuse as a luxury tourer. Then again, the way the Spider manages to emulate and sometimes better it, while seeming humble to the uninitiated, is seriously impressive. It may have seemed overpriced when new, but it’s a genuine bargain today.

However, if our Seventies buyer wanted a refined, finely balanced sports car with impeccable breeding that made the E-type seem ancient, he would have looked no further than his nearest Lotus build agent. The Elan, particularly in Sprint form, decanted the world of Formula One on to the British B-road, and in an era where the D-type was becoming a distant memory, that made it as special as an ‘ordinary’ sports car could possibly be.

Thanks to: Jaguar specialist WinSpeed Motorsport (winspeedmotorsport.com), David Buckwell, Carl Fuss, the Triumph Stag Owners’ Club, Matt Eaglestone, whose Corvette can be hired from £295 per day from thunderroadclassics.com, and Edward Keen, whose Elan is for sale – email edkeen44 @hotmail.com.

Carl Fuss: Triumph Stag: ‘It’s my very first classic,’ says Stag owner Carl Fuss. ‘Given their reputation it might seem like an odd choice, but the truth is they’re reliable so long as they’re looked after, with regular coolant and timing chain changes. Mine is still onits original radiator, which is why I added this front spoiler to make sure it gets enough air.

‘It’s a superb grand tourer. I have family in Germany so I’ve regularly taken it over there, and it copes with everything, even four-up through the Ardennes, the Eifel mountains and on the autobahn. There’s a huge Triumph Stag scene in Germany.’