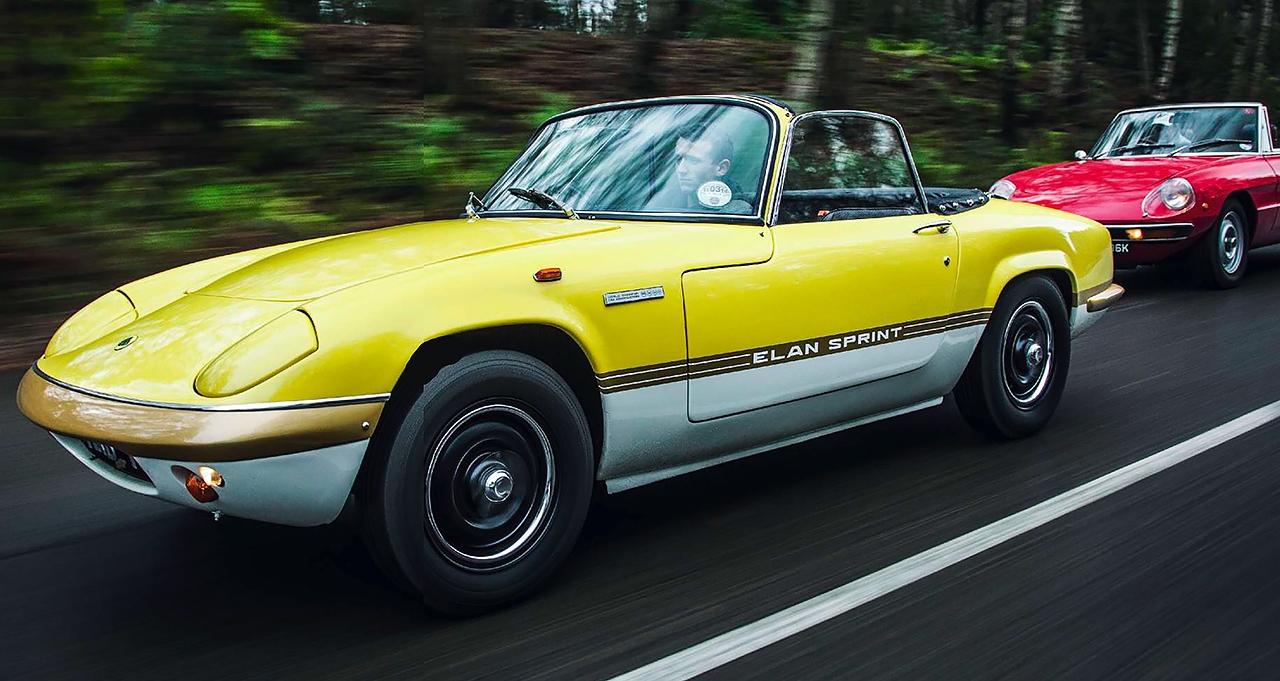 Lotus Elan Sprint S3.  If our prospective sports-car buyer still fancied the downsized, high-revving recipe in something a little more familiar and local, the Lotus Elan was the obvious choice. The Sprint, with its Tony Rudd-designed big-valve 126bhp twin-cam engine and 721kg kerbweight, promised comparable performance to the 265bhp, 1295kg E-type.

However, Lotus has a reputation for fragility, a sense reinforced the moment I turn the key. It’s the noise the Elan makes. While all these other cars settle down to steady idles, the Elan chatters, rattles, snorts and spits erratically. It’s a sound heard in paddocks the morning before Formula Three races, as mechanics tentatively tug throttle cables with their fingers and tweak air-hungry competition-bred carburettors, trying to find the perfect mixture adjustment in the knowledge they’ll need to rebuild it all after the race. I instinctively prod the throttle repeatedly for fear of stalling the Lotus if the carburettors aren’t perpetually sated.

The cockpit is much more comfortable than the E-type’s though. It’s clearly race-bred, but in a single-seater idiom that puts me right on the floor with my legs straight out, avoiding the wheel. Hemmed in by the high door sill and transmission tunnel, with a black-rimmed steering wheel and wooden-topped gear lever in his line of sight, the prospective 1971 buyer would have felt like Graham Hill.

The moment I select first gear, it’s clear that driving the Elan is all about economy of movement. The gear shift is short, precise and akin to adjusting the kind of beautifully engineered machine-tool found in a locksmith’s workshop. The clutch and accelerator pedals just need an ankle flex, rather than the kind of tortured contortionism demanded of me by the E-type.

Acceleration is ballistic. The dash to 60mph is cleared in a snarling, tree-blurring 6.6 seconds, and the relentless urge continues well beyond 100mph. Continuing the racetrack theme, the underbonnet racket – a mixture of almost road-unfriendly cam profiles, frenetic twin-Weber gurgle and an exhaust system designed solely to rid the engine of waste gases as quickly as possible – is corralled into a united, strident crackle.

But it’s the faithful handling and pure steering that the Elan’s best known for. All it takes is one corner and I’m smitten. It’s not the Elan’s body control through a series of demanding hairpins – which is excellent – but rather the sense that it will deliver whatever I demand of it. It’s not naturally biased towards under- or oversteer, but will deliver either depending on whether a driver barrels into a corner too heavily or mashes the throttle too hard on the way out. But to deliberately overwhelm the Elan’s little 155/80 R13 tyres is to miss the point. By extending the economy-of-movement theme across steering, gears and pedals, I soon realise how little I need to slow down for most corners and how easy it is to keep the racing line. Jim Clark drove like this in Grand Prix, and derived much of his success by limiting tyre wear and minimising fuel stops. His daily driver was an Elan. He wasn’t just driving, he was practising.

Unfortunately, away from racetracks and B-roads there are problems. Like the Spider, there’s not much torque – 113lb ft delivered at a racer-like 5500rpm – but nor is there a fifth gear, so the only way to cruise quietly is to short-shift up to fourth at the cost of acceleration. Also, it might have disc brakes on each corner, but they fade quickly – possibly a result of the Elan’s solid steel wheels, which don’t offer much ventilation – and at just 9.5 inches they’re not in the same league as the Jaguar and Alfa, with their respective 11 and 10.7-inch rotors.

However, there’s no doubting the Elan is a more convincing, more serious sports car than either the Coventry or Milan opposition. If our Seventies buyer was a keen club racer, then he could compete in an Elan with only minimal modifications. The E-type would need a serious overhaul that could ruin it as a road car, and if he wanted to race an Alfa he’d be better off with the firmer, more rigid Giulia GT.

Noise aside it’s surprisingly refined. The handling and steering helps – I never find myself flailing wildly trying to regain control unless I’m being Darwin-threateningly stupid – but I never felt as though I was driving a stereotypically flimsy glassfibre-bodied car.

The windscreen is taller than the E-type’s and the driver sits very low. Combined with the tough backbone chassis under my left elbow, it feels pleasantly snug and enclosed. Driving at high speed with the roof off isn’t the hardship it is in the Jaguar.

But would it appeal to our buyer? There’s no doubting its perfection as a sports car, but there’s something about its frenetic, spluttering engine that makes it seem several times more fragile than the Alfa could ever be. The Lotus Elan is like Icarus the second before the sun melted his wings – it’s always a wonder quite how high it’ll soar before it self-destructs.

Lotus Elan Sprint ‘I’ve just restored it- it returned from the paint shop last week,’ says Edward Keen of his gleaming, as-new Elan Sprint. ‘They’re fairly straightforward cars with no nasty surprises, you’ve just got to keep on top of the maintenance, keep the carburettors balanced and make sure everything’s set up just right.

‘I’m not sure I’d take a Jaguar E-type over an Lotus Elan Sprint S3. I’m a fan of very small high-performance cars – I’ve also got a Mini Cooper S – and I appreciate their nip-and-tuck handling and compact dimensions. The Elan does this perfectly and the Sprint is the best of the breed.’