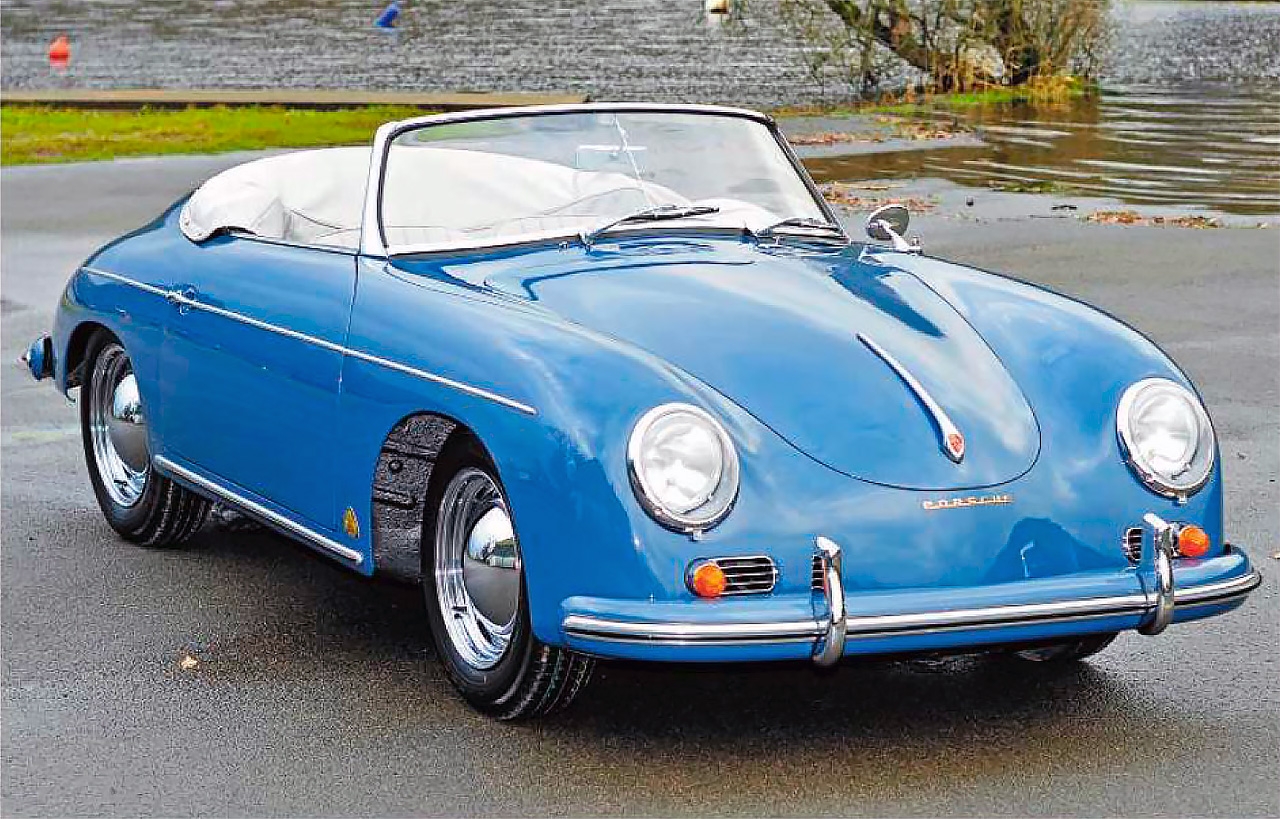 1958 Porsche 356A Convertible D £185,000. Looks dear – but it’s the thinking man’s alternative to a Speedster and £50k less, says Nigel Boothman. Just over 1000 356A Convertible D models were made in 1958 and ’59. It replaced the almost legendary Speedster before it was itself replaced later in 1959 by the 356B Roadster. This one is a genuine Super, with its original 1582cc 75bhp engine. It may not have the Speedster’s super-low roof and windscreen line but it’s lower and neater than the standard cabriolet yet boasts proper wind-up windows.

The car is a fresh UK restoration – the Adria Blue paint is lovely and is finished to a very high standard, with a uniformly crisp look. The panels are beautifully straight and the consistent gaps would surely satisfy a craftsman from Karosseriewerke Drauz, the ‘D’ in the car’s name. The wheels should be a flat colour with chrome hubcaps, as the vendor points out.

There are other small points to catch a 356-obsessive’s eye – chrome on the oil filler and the gearlever where there should be none – but the only obvious change is the retrim in grey leather. This probably would have been an option, but only for the seats, leaving door cards and hood bag in vinyl. Everything is now leather and this car has the optional reclining seats, which are very well trimmed. The hood is new, but details around the frame and header rail could be smarter. The brightwork is mostly replated or renewed but that which is not (screen trim, air vent trim) is slightly marked.

The car starts obediently despite a weedy 6v starter motor. This 356 is pleasantly easy to drive with well-spaced pedals, potent brakes (pulling to the left when we tried it) and a willing push from the engine. The light, play-free steering is a delight and shows how good a worm-and-peg steering box can be, while the gearchange feels almost gateless but each ratio slips silently home. Over bumps and round corners the whole car feels both light and stiff. It’s high- geared enough to make quick cross-country progress without effort. Neither speedo nor rev-counter was working on test and the brake pedal appeared to be lighting both rear indicators. There was a slight oil drip from the front of the engine.

There is a history file containing much photographic detail of the restoration and recent bills totalling £40,000. This fairly recent import had only been with the vendor a few hours when tested, and was due for a thorough shakedown and assessment. With all of the above points addressed it will be a superb example of a model four or five times as scarce as the Speedster and very similar to drive. In the feverish context of recent 356 values, the price is high but not unprecedented. If you prefer to enjoy the Speedster experience from more comfortable seats, behind a better windscreen and with wind-up windows, this is the one for you.

► Porsche’s first production car was built in Gmiind, Austria from 1948 to 1950, thereafter over the border in Zuffenhausen, Stuttgart. Volkswagen- derived flat four engine (only 1086cc to start with) and suspension. Cabriolet from 1951.

► Launched in September 1954, the Speedster was a lightweight roadster version of the soon-to-arrive 356A. Created for the American market with a low- cut windscreen and no wind-up windows; engine capacity was 1.5-litre until 1956, 1.6-litre thereafter. Replaced by Convertible D in 1958.