Back in April 2017, Classic Porsche introduced you to Callas Rennsport, a Southern Californiabased shop with a stellar reputation, which specialises in restoring/maintaining a range of rare Porsches. Part of the businessʼs success revolves around a group of faithful employees, with each having their area of expertise. When it comes to 914s, your car will most likely be handled by Andy Thonet, the owner of the yellow example featured here who came to appreciate the model years ago, long before collectors showed any interest in it.

In fact, this specific car allowed him to get a job at Callas, when company proprietor Tony Callas took notice of the quality of its restoration, performed in large part by Andy himself. The latter had no plans of quitting his day job in the computer industry, but being a true Porsche enthusiast how could he refuse working for one of the best-known specialists in the field?

Andy is no newcomer to the 914 hobby, having owned a few, including a fully-restored ʼ72 four-cylinder example. Yet, like many enthusiasts infatuated with the mid-engine model, he longed for a low-production 914/6, seen as the Holy Grail within his small fellowship. Porsche began producing the flat-four- equipped version in late 1969, with an impressive 115,646 rolling out of the Karmann factory until the spring of 1976. Now, compare this figure to the 914/6, equipped with a 2.0-litre flat-six: the Zuffenhausen plant built only 3338 cars, which equates to less than 3 per cent of the ʻregularʼ 914ʼs production run.

Why such a low number? A shorter production run (1970 to ʼ1971, though remaining examples sold through 1972) was one reason; purchase price was another, with the six-cylinder, 2.0-litre model costing DM20,000 in Germany compared to around DM12,000 for the ʻfourʼ. In comparison, the 2.2-litre 911T could have been yours for close to DM21,000 in 1970… The 914ʼs styling wasnʼt to everybodyʼs taste, either, hence potential Porsche buyers often preferred the more potent 911, which offered an pair of extra seats, too, albeit diminutive. 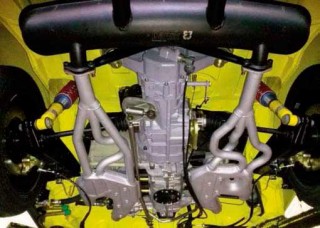 Being built as a joint venture between Porsche and VW also had an influence on the way the 914 was marketed, being promoted as a four-cylinder car first and foremost, thus not stepping on the 911ʼs toes, so to speak. Some 914/6 owners suggest another reason for the limited sales, though. In their view, their beloved two-seater handled better than the 911, thanks to its mid-engined configuration; but Porsche did not necessarily want to spread the word to protect the 911ʼs reputation.

Truth be told, the 914/6 is a terrific vehicle, driving better than many production automobiles manufactured almost half a century later. Porsche and VW certainly did their homework when they conceived the model, adding some welcome features compared to the four-cylinder cars. Their standard equipment included the following: ventilated disc brakes up front, unique rotors/calipers at the back, larger master cylinder, front suspension and torsion bars generally similar to the 911T, plus a 911 steering column and dash-mounted ignition switch. Among the other main differences, we should also mention the 901 gearbox, distinct rear valance, electric window washer and specific sheet metal in the engine compartment to accommodate the six-cylinder.

All 914/6s shipped with five-lug rims, more often than not Fuchs alloys as seen on 911s. However, some ran lightweight Mahle ʻGasburnersʼ wheels or 5.5Jx15 steel rims with 165-15 tyres (instead of 4.5Jx15 four-lug wheels with 155-15s for the ʻfourʼ). In the cockpit, the driver faced different gauges and steering wheel. This list is by no mean extensive, as other minor technical details separated the two versions.

Back to the subject of our article, Andy had been on the lookout for a 914/6 for eons, finally finding a candidate via the 914world.com forum. The car came fromApple Valley, a city located in the desert about 11⁄2-hours from Los Angeles. Oh, the hulk didnʼt look pretty; but where many pictured a pile of rust, he saw potential. Further research showed this example being number 970, hence Andy quickly sealed the deal. The date was 20 March 2010 and it would take him another four years to produce this show winner. His former 914 projects, all four-cylinder based, had left him with a pile of spare and NOS parts, although he would need a lot more to complete the restoration. ʻOne of the things I love is the hunt for partsʼ, he told us. ʻMy goal was to use the best original parts I could find, as well as a big-port 3.0-litre engine – I left the original factory 2-litre engine in storage.ʼ

Media-blasting the bodyshell in November 2011 allowed him to get a better idea of the damage sustained since 1970. At Auto Art Customs in Torrance, California, Kent Simmons was put in charge of chasing and eliminating the rust spots. They included the battery tray, tail sections, various holes on the leading passenger longitudinal, and the driverʼs side jacking point.

As work progressed, more areas of concern appeared, such as the rear quarters, front wings, as well as both sills/rockers. The longitudinals and other sections were opened, de-rusted and encapsulated to prevent any risk of future corrosion. A few donor cars and NOS sections came in handy to supply repair panels, such as longitudinals, jams, wings and the whole sail panel between the taillights.

Like many 914 fans, Andy loved the looks of the mighty GT models, characterised by their flares. But finding the right parts proved an arduous task, until he struck gold as he explains: ʻI managed to acquire a set of factory flares and, with the rear quarters already missing, it was a no brainer. These dealer-installed parts became the M471 option in 1971. They were very rare, as only 400 sets were made for homologation.ʼ

Several freshly-built pieces of the puzzle came from Restoration Design, such as the structure of the Targa/roll bar (known as ʻsailsʼ), along with the floor pans. To change the latter, Andy purchased a car rotisserie kit, which proved very handy to perform more metal surgery, including the engine compartment which had been poorly repaired in the past. Incidentally, a stiffening kit was fitted in the rear wells, at the forward engine mount and around the swing-arm console – modifications performed on the factory GTs when installing a more powerful engine. After completing the metal work, the ʼshell received a few coats of PPG primer sealer, followed by DCC single-stage paint in colour code 29, Canary Yellow – the vehicleʼs original hue as confirmed by Porscheʼs Certificate of Origin.

The 914 returned to Andyʼs one-car garage, waiting to be reassembled with a bunch of parts he had restored. He also installed the wiring harness, together with the suspension, consisting of Bilstein sport shocks with Rebel racing coilovers, which use Eibach 150 springs. Stopping the sub-1000-kilo Porsche comes courtesy of early 911S front calipers and 914/6 GT rear calipers restored by PMB Performance. Andy additionally improved handling by using Elephant Racing polybronze front and rear bushings, a 19mm front sway bar with Weltmeister bushings, plus Toyo Proxes4 tyres measuring 205/55-16 and 225/50-16. Notice the 7Jx16 and 8Jx16 Fuchs rims beautifully polished by Al Reed, a well-known name within Porsche circles. The next step called for installing the rebuilt gearbox and a ʼ1979 3.0-litre motor.

Now keep in mind that the stock 1991cc flat-six developed 110bhp, certainly not the most impressive tally – the four-cylinder 914s boasted between 80 and 100 in comparison. But Andy longed for a powerplant with more grunt; he therefore had Ollieʼs Machine Shop in Lake Havasu, Arizona perform its magic, including shuffle-pinning the case. The engine prep also involved larger oil squirters, twin-plug heads (with ʼ1978 European 911SC 36mm intake valves) and Mahle 9.8:1 pistons.

The list of mods continues with the micro-polished stock rods and crank, custom-ground ʻEʼ cams by Dougherty, Dansk Sport muffler, in addition to a pair of Weber 40IDA carbs with intake manifolds matched to the heads. Oil travels via 914/6 GT brass lines, which feed the Setrab front cooler complemented by a Mocal thermostat from Patrick Motorsports. The hours spent fine tuning the lump translate into an impressive 270bhp, quite an improvement over stock.

Andy finished the restoration with the 914/6ʼs basic cockpit, which retains its factory features, from the trio of gauges, to the four-spoke steering wheel – but finding all the trinkets was no easy feat. For better support, he installed a pair of desirable Scheel seats, unearthed in deplorable shape; they have been fully refurbished and recovered in black vinyl/cloth, and now look better than new. Several pictures in our article show the evolution of this epic restoration. And they undoubtedly tell the tale. Only few enthusiasts end up rebuilding their 914s to such level; so, not surprisingly, Andy has won his share of awards at shows, some organised by the Porsche Club of America.

We should all thank Andy for taking on this project, since he has helped bringing this lesser-known Porsche model to the forefront of our scene in the process.

“ANDY HAS WON HIS SHARE OF AWARDS AT SHOWS…” 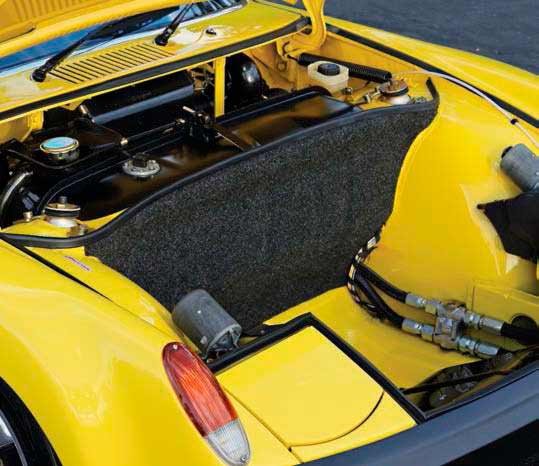 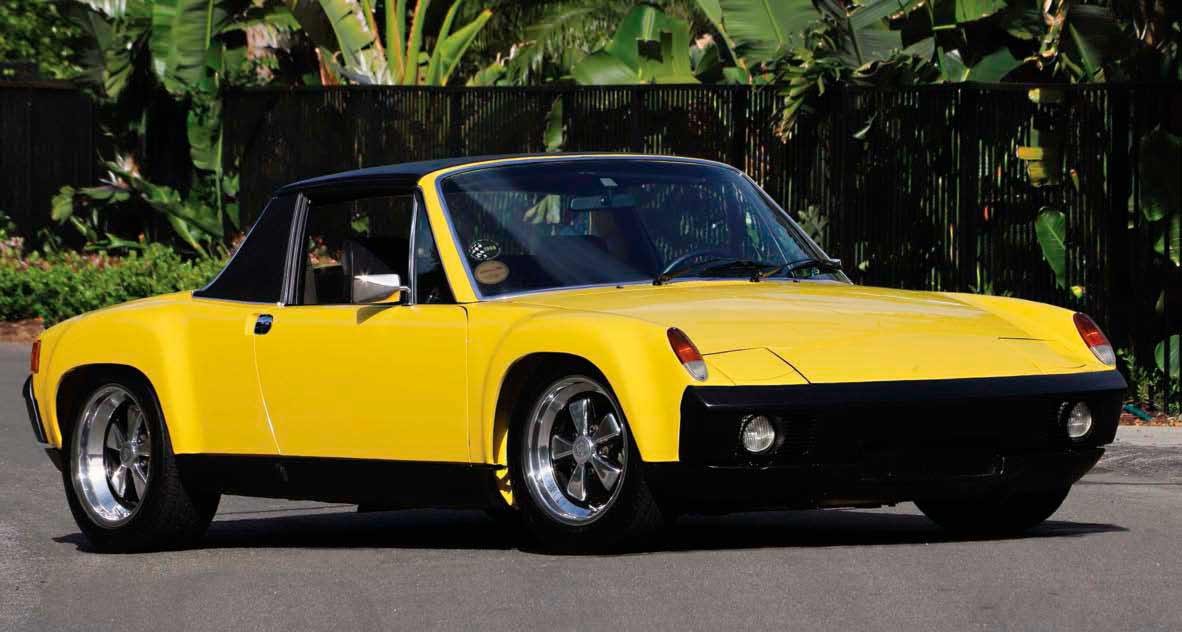 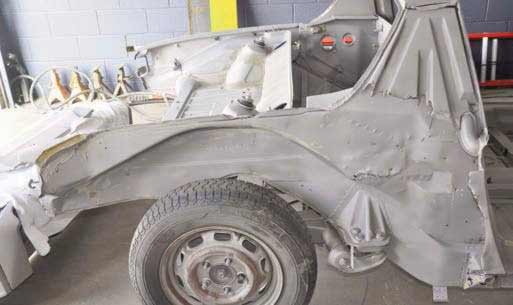 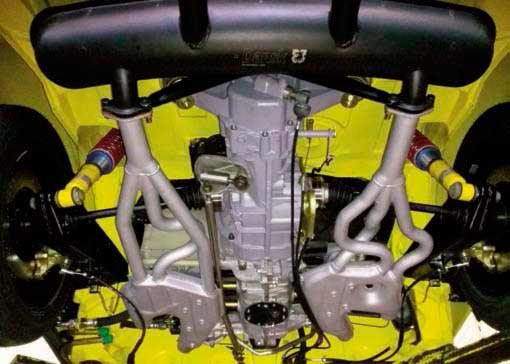 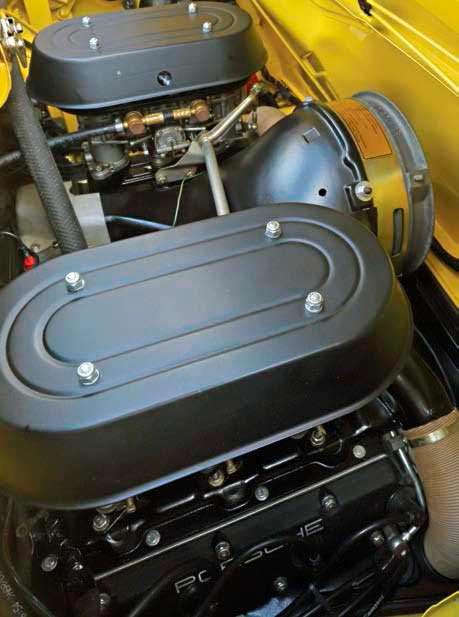 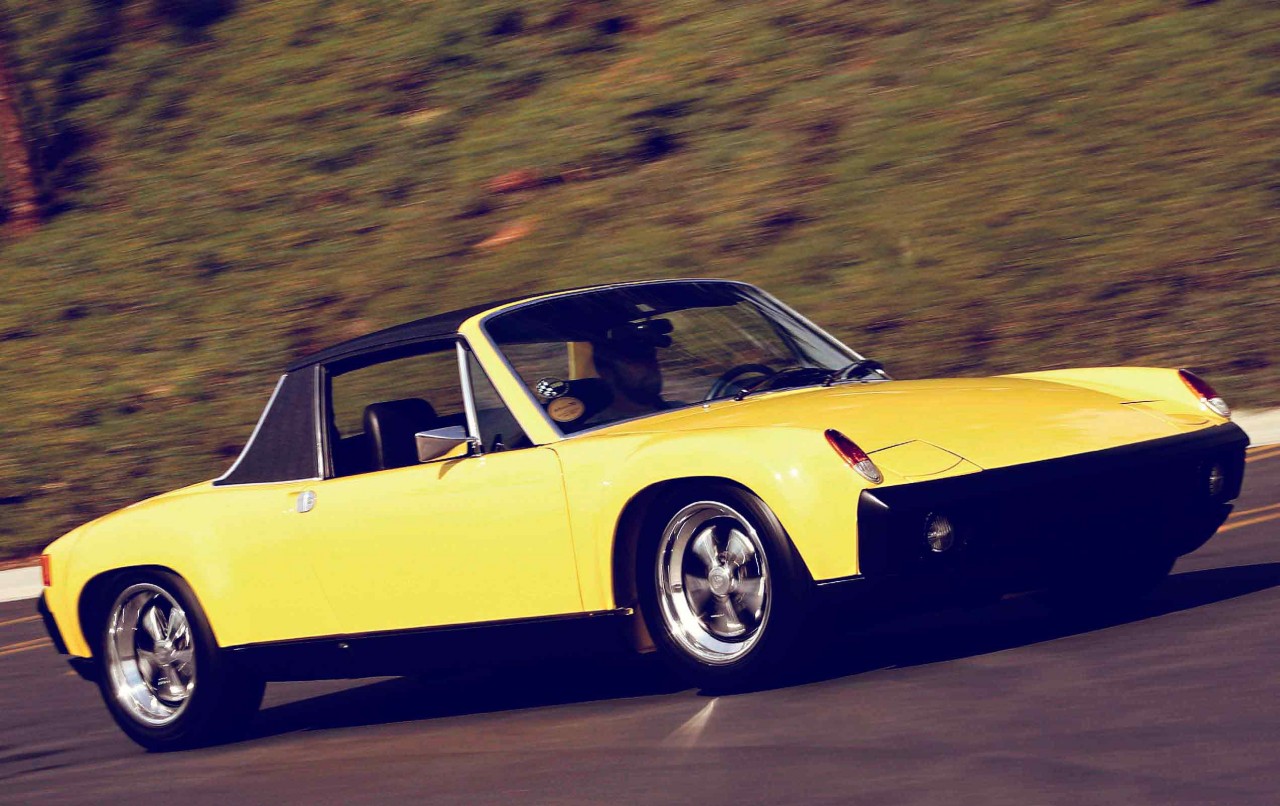 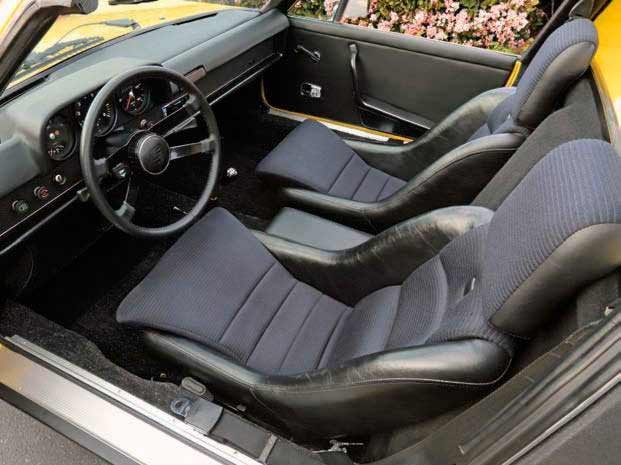 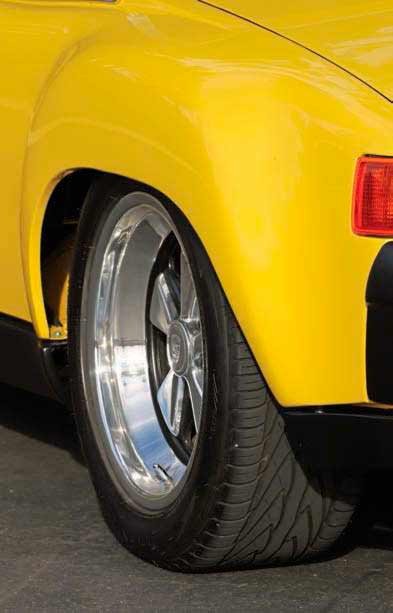 Above and right: The licence plate only tells half the story. The car may have started out as an original 914/6 but it has been taken a stage or two further, with GT wheel arch flares and (right) a healthy 270bhp 3.0-litre engine amongst the many modifications carried out by the owner. Far right: Andy Thonet gave up a job in IT to work with Tony Callas at Callas Rennsport, the quality of his restoration on the 914/6 capturing Callasʼs attention.

Above: Nose-down groundhugging stance gives the 914/6 an aggressive look. Wheels are ʻsixteensʼ detailed by Al Reed Below: As found, the car was a real mess – but it was an original ʻsixʼ so worth every penny. Transforming it from sowʼs ear to silk purse meant some extensive bodywork! Level of detailing throughout is now exemplary.

Above: Scheel seats are the perfect additon to the interior, offering far better support than the original fitment Above right: Oil lines seen on the right side of the photo feed oil to and from a front-mounted oil cooler. Below: With an all-up weight of less than 1000kg and a power output of 270bhp, you can be sure Andy Thonetʼs. 914/6 is a rocketship!