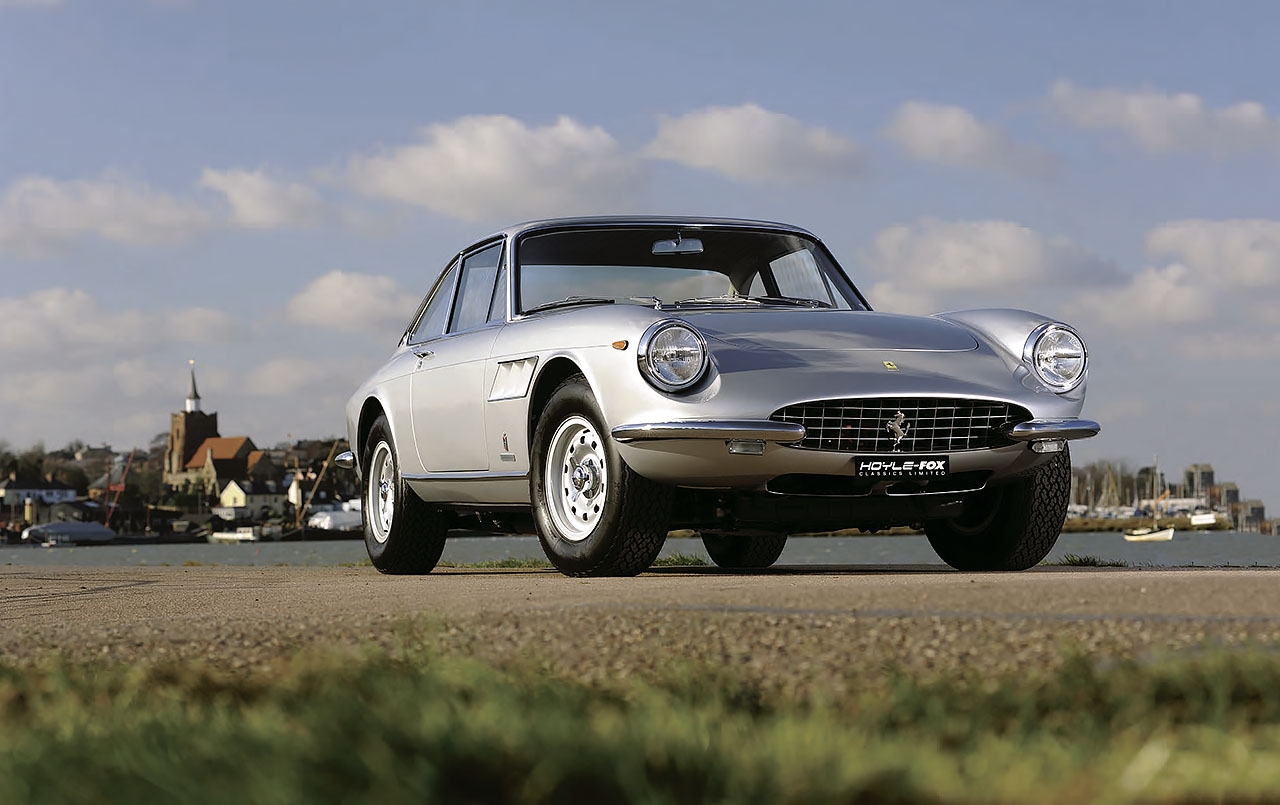 Introduced at the 1966 Geneva Salon, the 330 GTC was joined later in the same year by the open-top 330 GTS, which made its official debut at the Paris Salon in the autumn. Also in Ferrari’s 1966 catalogue was the 275 GTB, although it bore no physical resemblance to the 330 GTC the under pinnings were the same. They shared the same short wheelbase chassis, independent rear suspension and five speed transaxle gearbox. But that’s where the similarities ended because where the 275 was a compact sporting coupe with competition applications while the 330 was a spacious GT car. It was more refined, quieter and easier to drive.

As with all Ferraris of the period, the 330 GTC had a separate tubular steel chassis, in this instance designated Tipo 592, with a wheelbase of 2400mm. It had four-wheel disc brakes and all round independent suspension via double wishbones and coil springs with Koni dampers, running on 7 x 14 cast alloy wheels with the option of Borrani wires. 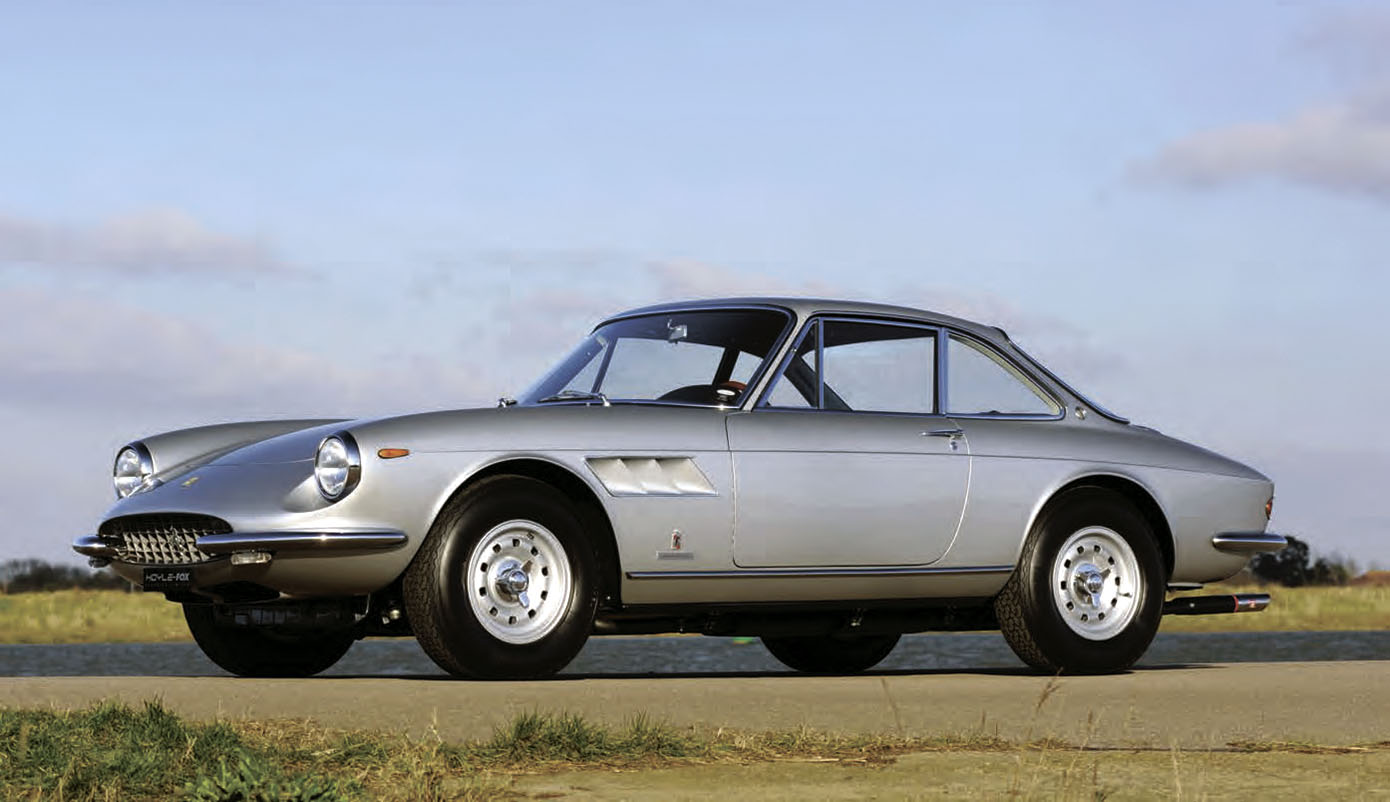 From a design point of view, the 330 GTC was definitely Pininfarina on a good day. Some critics are of the opinion that the headlights of 275 GTB are too close together, giving the front a pinched appearance. The 330 GTC is a much more balanced design and beautiful from any angle. It has more in common with the 275 GTBs open top relative, the 275 GTS. The tail treatment is virtually identical to the 275 GTS, while the frontal treatment reflects that of the 500 Superfast model, which was coming to the end of its production in 1966. This amalgam of the front and rear of two different Pininfarina-designed models produced a very elegant coupe with a light airy cabin created by the thin roof pillars and extensive glass area. The steel bodies were fitted with an aluminium bonnet and boot lid and then shipped to the Ferrari factory for fitment of the mechanical components. 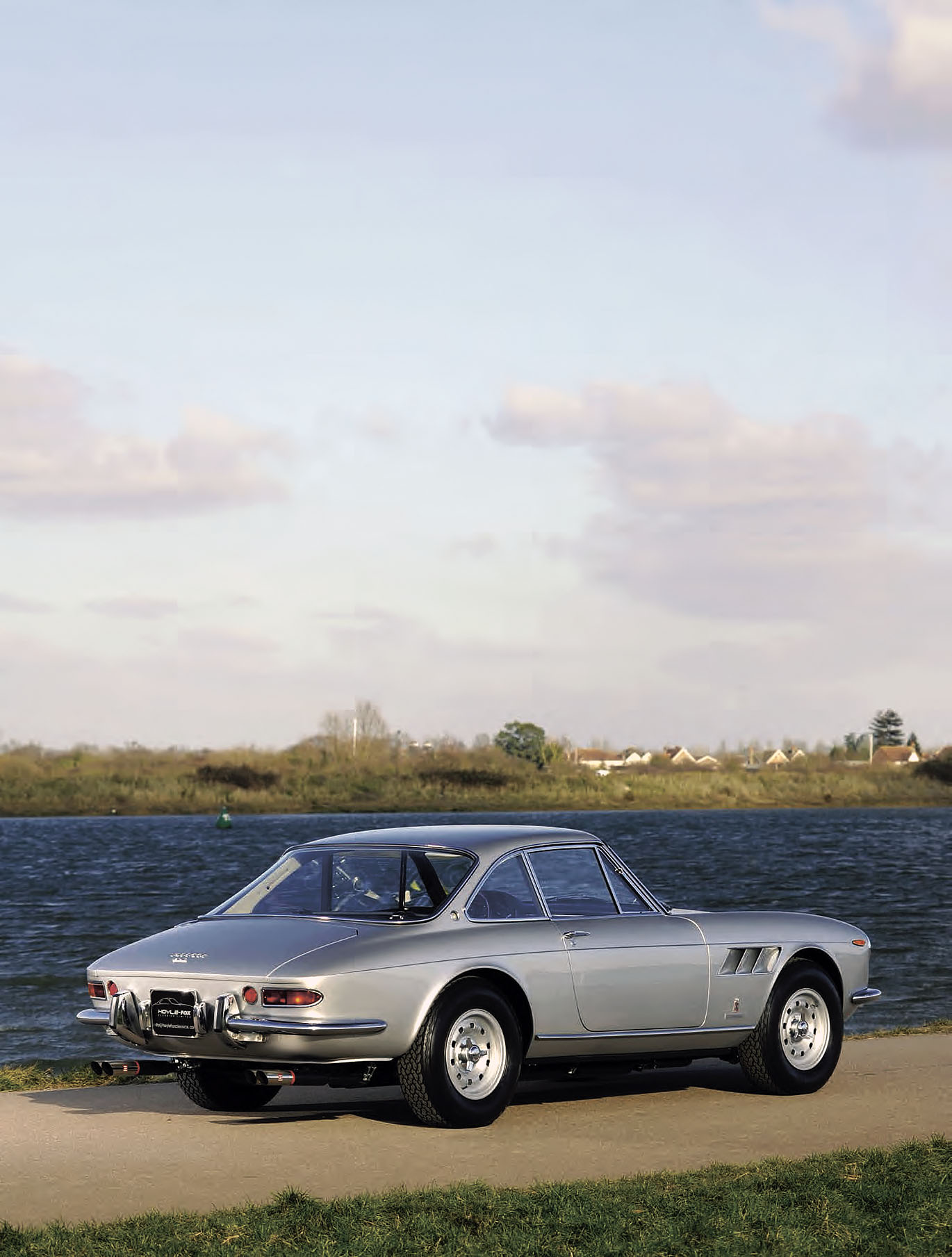 Arguably the 4-litre engines are the best all-round performers in terms or 196os and 1970s classic Ferraris. With the relatively light weight of 3500lb, the cars had a good turn of speed and the five-speed gear box made touring a pleasure. In addition, the longer stroke engine gave good torque which, coupled to the torque tube and easier gear shift, endeared the car to town users. Stopping was not a problem since the factory had switched to Girling discs all round with three piston calipers. This really was the beginning of Ferrari production cars that catered for the motoring requirements of the period.

For many years the 330 and 365 coupe ranges were second cousins to the more glamorous models and some of them disappeared or, in common with the 250 GTE, were dismantled to create 250 GTO replicas. Of the 600 coupes and 100 spiders that were produced only 21 coupes found their way to the UK. The right-hand drive cars earned a reputation for being conservative but stylish and were bought by attentive people who enjoyed weekend jaunts to Europe. Their relatively uncomplicated mechanical components have proved to be reliable and able to stand the test of time. 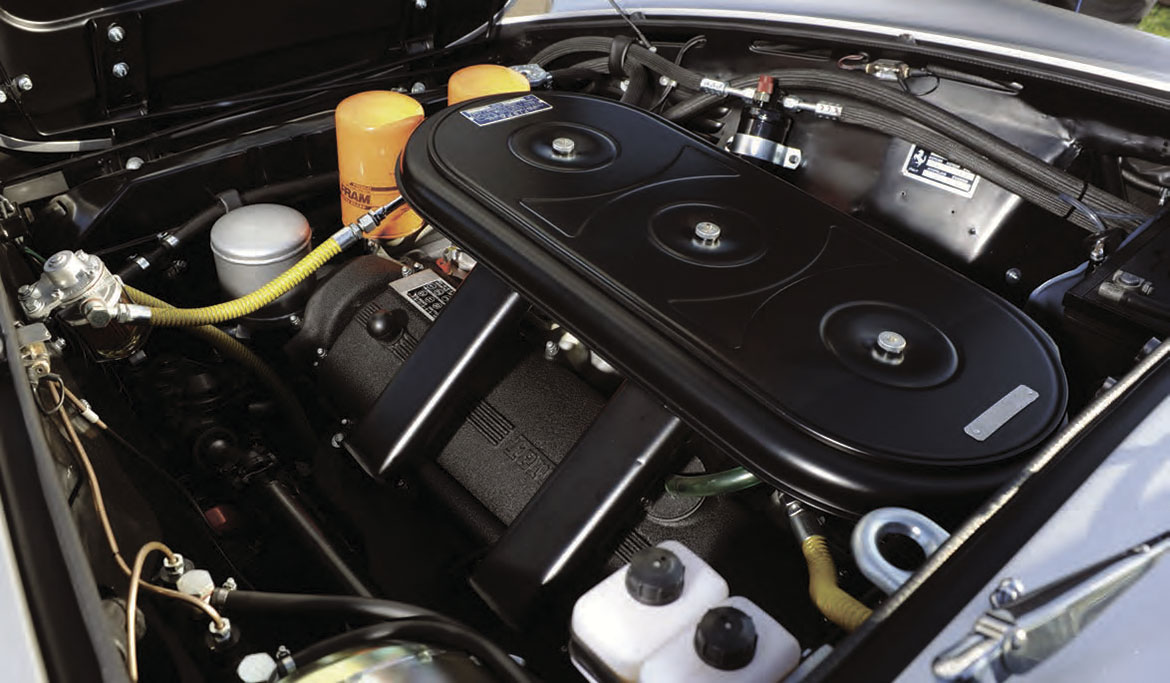 With so few examples brought into the UK, values remained steady for many years and bottomed out at around £30k but with the current interest by investors values are now over £600k. This makes it viable for companies like Hoyle-Fox to import structurally and mechanically intact left-hand drive versions and restore them for an international market. The UK is one of the most respected countries for quality, detailed restoration as proven by a long list of concours results.

The featured Ferrari 330 GTC was originally sold new to a customer in Milan. Two years later it was exported to the USA where the second owner kept it for 33 years. Unfortunately the owner died part way through the car’s restoration. USA Ferrari collector and parts specialist Tom Shaughnessy rescued the car and Hoyle-Fox subsequently sent a team over to California to inspect it with a view to purchase. They were able to assess the condition of the bodywork and confirm that it had the necessary matching engine and chassis numbers. Having located all the parts that were stored in cardboard boxes Hoyle-Fox decided to buy the car and shipped it to the UK. 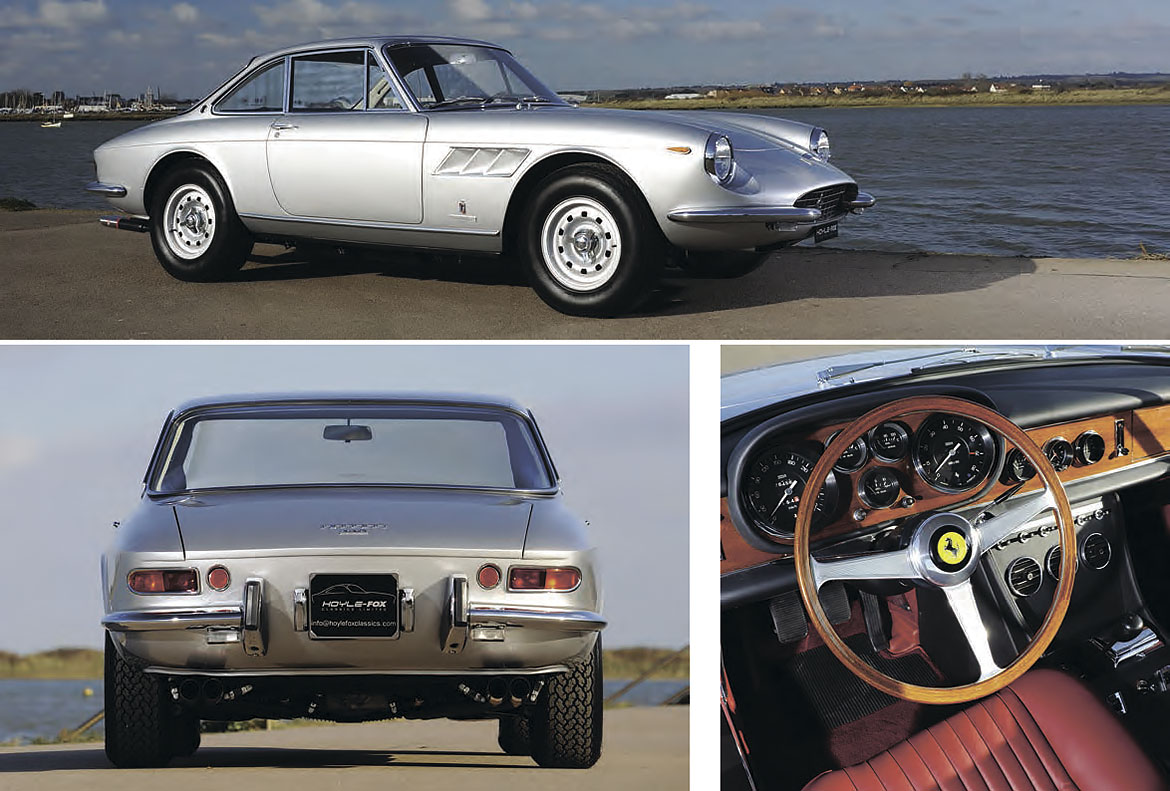 The first task was to strip out all of the old, worn out interior and assess what could be salvaged and what would have to be replaced. The door cards were missing along with lots of other interior parts that needed to be found. The engine had been completely dismantled so a full engine and gearbox rebuild was deemed necessary.

The partly restored red painted body was taken back to bare metal and it was revealed that the dry California climate had preserved the shell in superb condition. A full nut and bolt restoration took about 1000 hours to complete with every part of the car either restored or replaced.

Hoyle-Fox decided to paint the car Grigio Argento, the same colour that it left the factory with in 1968. The interior has been re-trimmed in burgundy leather. Rebuilt to Ferrari Classiche standard, this stunning GTC is sure to be a strong contender at concours events during 2015.