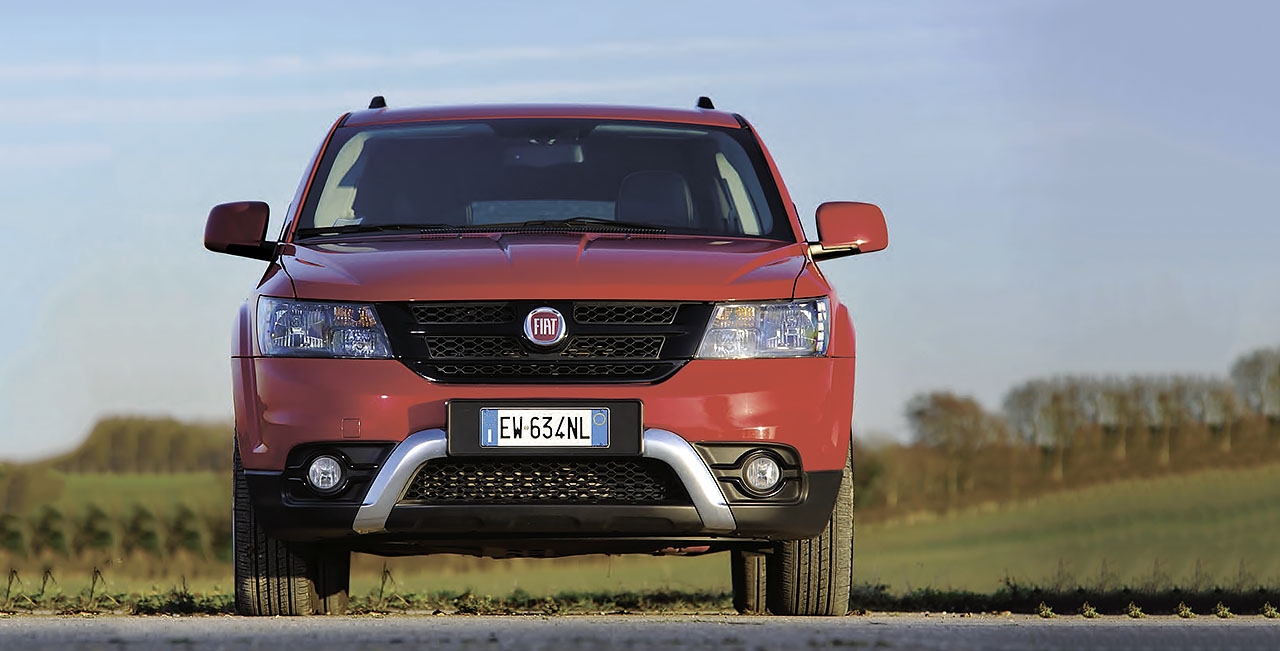 Fiat Freemont Cross – road test. All-wheel drive for mainland Europe. Brief Encounter. A unique opportunity to find out what the elusive Fiat Freemont is like to drive on UK roads. Test by Richard Aucock. Photography by Michael Ward.

What’s the new Fiat model with the highest level of owner satisfaction? Perhaps unsurprisingly, the wonderful 500. But what’s the one with the second-highest number of happy owners? The Freemont Cross. This is perhaps very surprising indeed, but the facts bear it out: owners in countries lucky enough to get it, love it. In the UK, we sadly don’t get it – but that didn’t stop Auto Italia sourcing one to try out in leafy England. We love our crossovers here, so we were intrigued to see if Fiat’s missing a trick by not offering the Freemont to eager UK buyers. After all, it’s not as if the expensive end of the range couldn’t do with a boost…

ABOVE: Unlike many vehicles of USA origin, the Freemont’s dimensions suit narrow UK country roads.

There was added impetus for our unique drive, too: because we were testing the car away from its intended market, we would be able to take cold, calculated look at it, to judge it purely on the facts rather than being influenced by value, marketing focus or preconceptions. In a nutshell, it’s not on sale here, but we would judge whether it ought to be.

The Fiat Freemont was derived from the Dodge Journey that was first seen back in 2007, before going on sale in spring 2008. Inspired by the Ford S-Max, the smartlooking crossover-MPV boasted seven seats in a 5+2 layout: the rearmost seats weren’t quite as capacious as in traditional people carriers such as the Chrysler Grand Voyager, but were fine for short-distance use – and, crucially, folded flat into the floor when not in use for compromise-free load space.

It felt a little underdeveloped at launch, but still impressed thanks to its crisp styling that was much more modern than the period American norm. Conventional four-cylinder and V6 petrol engines drove the front wheels – all-wheel drive was an option – and it gained a Daimler-sourced diesel engine by the time it arrived in Europe.

It wasn’t totally vanilla engineering, either: standout details include an aluminium bonnet, composite tailgate and rear doors designed to open almost 90 degrees. The second row seats were mounted 40mm higher than the front row, and the third row were 17mm higher again, ensuring everyone had a good view out.

The car went down well, particularly when a 2011 model year update tweaked the suspension, interior quality, engine installations and other details. By then, of course, Fiat and Chrysler were alliance partners – and this is where Fiat comes in. Sensing an opportunity to fill a gaping hole in its model range created by the loss of the Ulysse, the brand arranged a deal to rebadge Journeys from the Mexican factory, revealing the new Fiat Freemont to the world at the 2011 Geneva Motor Show.

It was badge engineering at its best: changes were limited to front and rear bumpers, plus, yes, the badges. The interiors were almost identical. So what was the appeal? Well, by then, Dodge had pulled out of Europe, taking the Journey with it. Fiat thus had a triple opportunity – please its existing MPV customers, bring in new ones with its leftfield new offering, and even maybe transfer across some Chrysler and Dodge customers upset by the loss of the brand.

And it’s certainly grabbed the opportunity. Today, Freemont sales stretch into the tens of thousands and, as we said at the start, owner feedback is overwhelmingly positive. It’s a car that’s gone down really well in Europe. We were keen to see why.

For 2015, Fiat got even smarter with the Freemont: it launched a Cross variant, enhancing the crossover’s SUV cues without hurting its MPV practicality. This is the car we drove in the UK – and, in the metal, its platinum chrome bumper inserts, black grille and 19-inch five-spoke alloy wheels, platinum side skirts and matching roof bars looked even better than they did on the 2014 Geneva Motor Show stand where we first saw it.

The ‘Freemont Allroad’ look really works, giving Fiat a striking seven-seat crossover model that’s virtually without rival in the sector. Sitting half way between a Ford S-Max and Land Rover Discovery Sport, it’s yet more evidence of the clever thinking that’s gone into Fiat’s work with its Dodge-derived model.

The interior looks great too. Dominated by a GTI-style black colour scheme, leather seats boast sporty black mesh inserts plus grey stitching that’s matched on the door panels and arm rest. The graphite grey finish in the dashboard, instruments and steering wheel is also premium-look and modern, enhancing the latest generation of high-res touchscreen fitted in the centre of the dash. We’re sure it was packed with apps, gadgets and clever features; sadly, it was all in Italian…

We instead played around with the seats. And soon lost count of the number of configurations you can fold, slide and recline them into. Fiat claims 32 positions, more than any other rival: it also says there’s 140 litres of total stowage space within the 20 (yes! 20) stowage compartments inside. True to form, our mobile phone was quickly lost. Cleverly, Cross models even come with integrated child booster seats on the middle-row seats, allowing children weighing between 15-36kg to use them without an additional child seat. 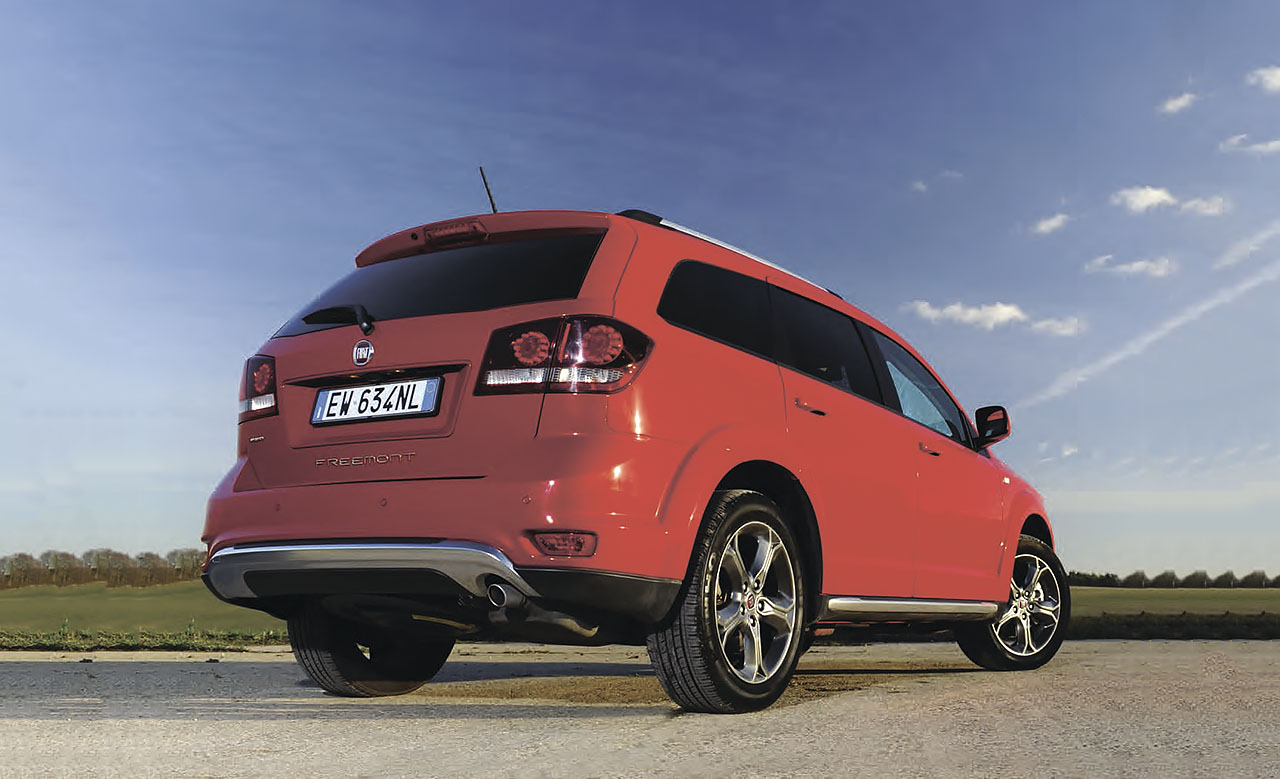 Fiat offers the Freemont Cross with two diesel engines, either the 140hp 2.0-litre MultiJet II or its more powerful 170hp sibling. Both are offered in frontwheel drive guise with a six-speed manual transmission, but the 170hp version is also available with Active AWD, paired with a standard six-speed automatic gearbox. That’s the car we drove in the UK.

From cold, the MultiJet II engine is a little vocal – you sense the original US engineering focused on home market petrol engines and didn’t fully account for the different noise paths and frequencies of oil-burners.

Luckily, it gets much smoother when warmed through, settling down into the background when cruising – and 258lb ft of torque means the auto ’box is usually able to use the engine’s muscle to build speed rather than spoiling the peace with a downshift. This is something it’s good at; less impressive is its tendency to noisily hold onto gears when going up through the ratios. When you’re not on it, why do you need to hit 3500rpm before each upshift?

When you are on it, the Freemont does 0-62mph in 11.1 seconds and has a top speed of 114mph; doesn’t sound a ball of fire, but it does weigh more than two tonnes and, taking this into account, it doesn’t feel particularly lethargic. Besides, traction is guaranteed thanks to the clever on-demand all-wheel drive system, something we frequently put to the test during the wintry weather we’ve had.

The active part of the AWD system means it’s ordinarily front-wheel drive, which helps fuel economy (it officially averages nearly 39mpg), but as soon as sensors detect a loss of traction at the front, an electronically controlled coupling diverts power rearwards. Fiat says this system is faster-acting and more accurate than a traditional viscous coupling, and it also allows the car to stabilise handling with the rear wheels: it will divert a little drive to the back at speeds of up to 62mph to aid stability and turn-in. Clever stuff.

To say you can feel it doing all this isn’t quite correct: the point is that you’re not meant to – rather, you instead won’t feel any loss of traction, any front wheel fight, any tempering of torque by the traction control system. I’m positive the benefits to handling in medium speed corners were appreciable though: it’s a big thing, the Freemont Cross, but I could steer it with impressive accuracy despite it being left-hand drive in the UK, and certainly never suffered any issues with confidence regardless of my enthusiasm.

By this time, I was also finding the ride had more depth than I first thought. Initially, it felt a little lumpy and stiff in town, mainly because of the big 19-inch wheels. Get it up to speed, though, and it’s impressively comfortable, offering controlled cushioning on motorways that you sense will find plenty of favour when the family is on board. They’ll also like the 368 watt Alpine premium stereo: we may not have been able to decipher the Italian Uconnect menus, but we certainly know when Radio 2 is sounding pretty tasty.

Other aspects that will help family unity include an abundance of legroom in the middle row, plus more space than you first think in the rearmost row – only getting in and out is tricky, the latter being something to bear in mind if you’re using it to give your mates a lift back from the pub.

There are also climate control vents in the roof – take that, National Express – plus a rear seat entertainment system whose multimedia screens will elicit screams (and then fully-engrossed silence for the rest of the journey) from the kids. It offers most things dearer premium SUVs do, in fact, with a good slice of their headturning style too, just presumably without the premium-level price tag.

By the end of our time with it, we were convinced: surely there’s a market for the big Fiat in the UK? It’s a decent offer in a very ‘now’ sector, and the Cross model has a good slice of style to fit into a progressive range of cars stretching from 500, to 500L, to 500X.

Of course, it’s unlikely to happen, even though there’s a right-hand drive Freemont on sale right now in Australia. We think this is a pity; priced right, it could offer access to a marketplace currently off limits to Fiat. It seems you’ll have to take our word for it, then. We were satisfied, like all those happy owners overseas. Unfortunately, UK residents, you won’t get the chance to find out why. Makes us a little cross, that.