We may still be firmly clasped in the grip of yet another savage winter, but don’t be downhearted. We’re technically in an ice age (the Earth is, by nature, a tropical planet), and besides, the sticky embrace of a scorching summer is just around the corner. And if you just can’t wait, why not saddle up with Alex Radford in his shimmering land-barge sunseeker? The E23 7 Series that he proudly calls his own has balmy good times and solar radiation baked right into its very being. There’s oodles of room to stretch your legs and chill, plus plenty of boot space for straw donkeys and backup sangria. Look, he’s already thrown his suitcase in there and he’s ready to roll! 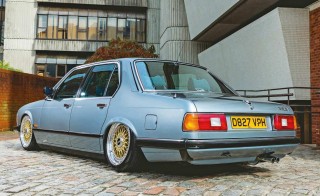 Sunglasses on, straw hat in place, elbow out of the window, Alex begins to explain for us how his E23 adventure began: “I was looking for something a bit different,” he says, “so I decided on a Seven. Once I saw this car, I just had to buy it – I knew that I would forever regret it otherwise, as they don’t come up often in this condition without a massive price tag… especially with a manual gearbox.”

His previous project had been a Mk2 Golf GTI – bit of transition from hot hatch to luxobarge, isn’t it? “Well, yes,” he considers. “But I’ve always had a thing for BMWs. As far back as I can remember my dad has always owned one, so it’s in my blood. And I really love the yuppie ’80s look of this thing! It’s so well-equipped for a car that went into production over 40 years ago, plus you can’t beat that iconic sharknose design.”

He’s right, there are few stylistic quirks more beguiling than that retro nose overhang. So how did he find such a peach of an E23, given that they’re so few and far between in this state of solidity and originality? The answer is largely down to fortuitous happenstance, it transpires, as Alex explains while he throws a slice of Huey Lewis onto the old-school Blaupunkt and knocks the top off a dewybeaded glass bottle of Coca Cola. You see, Hampshire-based Alex had found the car a mere hop and skip away in Banstead, Surrey – the town where it had spent its entire life since it was sold by the Cronk dealership in 1986. Its first and only owner had gone into a care home back in 1999, and since then the 728i had been laid up in storage; the owner passed away and the car was left to languish in the shadows. Fast-forward to the day Alex went to see what manner of salvation might be possible, and he found himself able to purchase the car from somebody who knew a carer at the home; they actually wanted to keep it and had only tentatively offered it to market, but our man knew an opportunity when he saw one and slapped his deposit down right away. 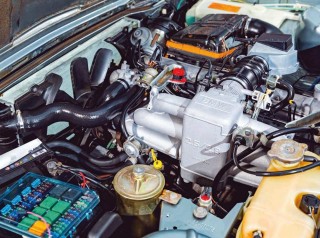 “Other than needing a really good clean, it was pretty much perfect,” he marvels, gazing around the sumptuous blue herringbone with a sense of faint disbelief. “It had a full BMW history from the dealer who originally sold it, it was completely original, and not a bad spec at all for a 728i – it even had the original factory-fitted Panasonic carphone! I haven’t touched the bodywork at all either – it came up pretty well with a good polish.”

It certainly did, and the colour scheme is the most summery spec we can imagine; forget your beigey golds or anonymous silvers, this crisp Cosmosblau paint is keenly reminiscent of clean-cut ice cubes clinking through tropical juice blends in seaside tavernas, while the deep blue interior couldn’t be more Mediterranean if it tried. The whole thing speaks of endless afternoons and half-remembered sunblock.

So, with such an original car, what were his initial plans? A good buff up and out onto the concours scene? “No, it was air and wheels from the off,” Alex grins. “Call it boring, but I don’t care – it’s a greatlooking car, and I reckon anything beyond what I’ve done would be sacrilege. All cars look better lowered, obviously I had to do that, and you can’t go wrong with a set of BBS RSs for that period-perfect look.”

It’s very much a less-is-more approach, with 8.5×17” RS 321s on the front and a pair of RS 320s with an extra inch of width out back, and the application of quality Air Lift chassis components was a no-brainer. Having lived the static life with his Golf and endured relentless smashings to his undercarriage, he felt that the E23 perhaps deserved a little more mechanical sympathy from the calming guide of air-ride.

And while you can’t just buy a kit for this sort of car off the shelf, all the pieces were available in universal form to wrangle together something great. We’re looking at HF561 universal front struts, fabricated to work with a pair of original-spec donor struts, cut off to use the stub axle for the hub/disc assembly; at the tail end we find HF567 sleeve units to provide that all-important wheel clearance. And, because so much of the car is so gloriously original, Alex has hidden the five-gallon stubby air tank inside a suitcase in the boot – any casual observer will assume that he’s merely off on another summery adventure. Which, of course, he is.

“The car has such a long wheelbase that running coilovers on it at the height I would want to run just wasn’t possible, as the sump, anti-roll bar and exhaust hang down so low,” he explains – not that he needs any justification for the bags, we reckon it’s the perfect solution for a car like this. Luxurious saloons and air suspension go hand-in-hand, just ask any premium manufacturer.

As we pull up to a drive-thru to procure some ice cream to combat the insistent British sunshine, Alex feels that further explanation is necessary. You see, it’s not as if he simply dragged this car out of storage, cleaned it, bagged it, and called it a day. Recommissioning a classic is rather more involved than that. “I had to overhaul all of the brakes as they seized and boiled the brake fluid,” he says. “Losing the pedal wasn’t fun, so I had the calipers stripped, zinc-coated and rebuilt, and then got busy with changing the pads, discs, hoses, brake lines, master cylinder, ABS system, bushes, fuel lines, wheel bearings, arch liners… it went on and on. The driveshafts were rebuilt, every nut and bolt was replaced. It’s all been done with genuine parts from BMW too, as I’m obsessive with that. I also had the trailing arms, fuel tank, driveshafts and a few other bits powder coated or painted. Only then was it time to fi t up the air-ride and do a boot build… I knew from the start what I wanted to do with the car and how I wanted it to look, so that was easy. The suspension was fabricated by Jonathan at Air Lift UK and I fitted it myself along with the boot build. All of the other work I did in evenings and weekends, and I owe a massive thanks to SMDG Performance for letting me keep the car there, and for lending the occasional hand when I was sick to the back teeth with it.” 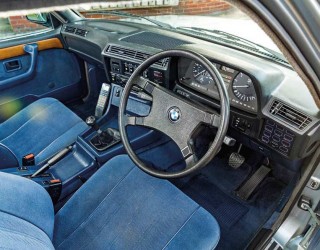 Rolling up to the seafront, we ease ourselves out of the sumptuous blue innards and mosey to the sea wall, appraising the car from a fresh new angle. Those wheels really do set it off a treat, don’t they? “Yeah, it had to be BBS RSs,” Alex reiterates. “They just work, a timeless classic. I don’t think a set of 3SDMs would look quite right here! I was originally thinking of doing a set of metric TRX alloys or some M535i wheels turned into custom split-rims, but I got the RSs at a price I couldn’t say no to. I’d love a set of HRE 501 vintage wheels but hey, I’m not made of money!”

The uber-luxurious yuppie-mobile offers a modest counterpoint to this, but we turn on our heels and head down the beach as the E23’s cooling exhaust ticks languorously in the blistering sunshine. We find blue deckchairs that match the BMW’s own seats, and lower ourselves in, gazing out over the waves to the horizon. “The car’s interior is completely standard,” Alex explains. “Other than getting rid of years of dust, nicotine stains and a family of field mice in the dash, I haven’t done anything to it.” It is a wonderful place to relax. So what’s the best thing about the car, then? The low-and-lazy demeanour, the retro tech, the vibrant sense of heritage? “It has to be the air-ride,” he smiles, sinking his toes into the sand. “Nothing can beat the feeling when I got the car off the axle stands after all that time and saw it laid out on the floor, just how I had wanted it to be from the start.”

And with that, it’s time to sidestep from this fantastical reverie, hit the beachside bar and toast the gleaming fruits of his achievements, shocking us back to reality as we realise that summer is still some way off. Baby, it’s cold outside. But in Alex’s world, the sun is always shining.

THANKS Big thanks to Jack Moody, Beinn Dale Goodchild, SMDG Performance, and Air Lift UK. Also, a massive thank-you to lizzi (my partner) for putting up with all the time I spend playing cars whilst she looks after my boy. Also a shout out to the East G8 Cru, Jakey B, Skoffa, Beinn, Tegan and Jack

“It was air and wheels from the off. Call it boring, but I don’t care – it’s a great-looking car, and I reckon anything beyond what I’ve done would be sacrilege”

Live out your ’80s fantasies by shouting “Buy! Sell!” into the Carphone.

So utterly immaculate and original.

2.8 M30 in superb condition. One of the most fun boot installs we’ve seen in a long time.