BMW’s epic M5 has always been the benchmark for super-saloons and has evolved considerably, from the inaugural 1985 3.5-litre, straight-six E28 version, through to the very latest 592bhp, twin-turbo, four-wheel drive F90 model G30 5-Series based M5 2018.

Every generation boasted greater power than its predecessor, but the M5 has become steadily heavier, too. What’s more, recent UK incarnations have only been available with automatic transmission, which has left many M5 enthusiasts feeling that some of the purity of those earlier, manual cars, has been lost.

Of those first three generations, it’s probably the naturally-aspirated V8-powered E39, rather than the earlier E28 and E34 straight-sixes, that most appeals to M5 aficionados. Launched in October 1998, this 400hp V8-powered saloon instantly earned rave reviews, and has proved popular with M5 lovers ever since. Blending sensible, refined looks with stunning performance, good E39s are now appreciating classics.

At this M5’s core is the wonderful S62, chain-driven, 4,941cc, normally-aspirated V8 engine, mated to a six-speed manual gearbox. Extensively modified by BMW’s M Division, this powerful engine has a higher compression ratio, double Vanos variable valve timing, individual throttle bodies for each cylinder plus a dual-air induction system – enough to see the E39 blast to 60mph in just 4.9 seconds, then on to a limited top speed of 155mph. Handling was impressive too, thanks to stronger mounts, bushes and wheel bearings, as well as unique spring rates and a lower ride height.

Other unique features included 18in Shadow Chrome alloy wheels, quad tailpipes and a small lip spoiler on the boot. This model was also the first M5 to be produced on the regular BMW production line, and a September 2000 facelift introduced headlights with a corona ring, revised rear lights, front parking sensors, Alcantara headlining and grey-faced main dials.

A Sport button triggered sharper, drive-by-wire throttle response and a little more steering weight. Popular options included Sat Nav, a TV function and the Extended Leather pack, and the E39 sold better than its predecessors, with over 20,000 built. UK buyers snapped up 1,529 examples between 1999 and 2003, when production finally ended. 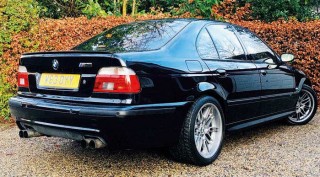 With a snug, deep driving position and surprisingly comfortable seats, the E39 still feels quick by today’s standards, and that rumbly V8 engine is wonderfully smooth and free-revving. The soundtrack is somewhat muted until you pass 3,500rpm, but then rapidly breaks out into a pleasing roar as the revs rise. The car’s quite heavy, though, so there’s some understeer to contend with in slow, tight corners but, once you’ve switched off the DSC traction control, an excellent chassis means the E39 is actually pretty easy to drift controllably – at least in the dry!

Scour the classifieds and you’ll find some examples pitched at under £10,000, but approach these with caution. You’d be better advised to spend £12,000-£17,000 on a cherished example, although top-end concours, low-milers can now fetch £25k-plus.

Many examples have covered over 100,000 miles, like the 2000 V-plater I found advertised for £10,750 at North Yorkshire Classic cars (tel: 07962 376666). With 114,000 on the clock, in stunning carbon black metallic with black leather interior trim. It’s had just four previous owners from new, and comes with all the original documentation including a full handbook pack, two keys and the original service book containing seven main-dealer stamps and one from a specialist.

However, a high mileage needn’t be a problem: “The E39 5-Series and can easily handle six-figure mileages if properly maintained,” says Glass’s Robert Redman. But note that, “The 100,000-mile mark is typically the point at which the timing chains – and, ideally, the VANOS units – should be replaced, and the suspension overhauled to maintain the car’s performance and handling.”

So, it’s worth buying a well-maintained example. Something like this Le Mans Blue 2001 example that’s for sale at Mansfield-based Parkway Specialist Cars (parkwayspecialistcars.co.uk); with 81,987 recorded miles, the asking price is £20,995. A mint example, it does, however, pack a full BMW main-dealer service history, and is sold with the entire booklet pack set, a factory build card, a complete BMW tool kit and original keys.

“Values have gone up quite a bit over the past few years, probably due to the reliability issues surrounding the new E60 V10 version,” reports Grant Darling at James Paul Car Sales. “If you can keep the mileage down and look after your E39 properly, it should appreciate slowly.” Robert Redman agrees: “It’s likely that the better examples – if properly looked after – will gain in value. To many, the E39 M5 is one of the last ‘old school’ super saloons, and this has already given it a degree of classic status, which is only likely to grow with time.”

I’d always be wary of paying too much, though. This concours Carbon Black 58,000-mile 2001 example at Hexagon Classics (hexagonclassics.com) is undoubtedly one of the best E39s you’ll ever find. Boasting various factory options including an electric glass sunroof, the professional navigation package with TV function, park distance control front and rear, a history file including MoT record and invoices, plus the original M leather handbook pack, it’s perfect. However, at £39,995, you’d be unlikely to see any appreciation for some considerable time.

Regardless of how much you spend on a car, though, new owners would be wise to have a £2,000-£3,000 ‘fighting fund’ set aside to cover the almost inevitable expenditure that’ll be necessary down the line. Never forget that these cars require continual, top-quality maintenance, especially if they’re driven hard on track. So what potential issues should buyers look out for? “The suspension, sills, jacking points, around the boot and inside the fuel filler cap have a tendency to rust,” Grant Darling confirms. The engine requires proper care, too. The double VANOS system has a tendency to rattle when cold until oil pressure has built up but, if this persists when hot, then a new or rebuilt Vanos unit is required – otherwise you could be facing a £6,000 engine bill. Other less serious engine issues include failed seals or solenoids, broken cam position sensors, worn tensioners, failing air flow sensors, tired clutches, dead pixels on dashboard displays, leaking rear diff’ seals and worn suspension components.