Yastiaki ‘Bob’ Suzuki doesn’t do subtle. His past cars have included a Kermit green Motors port GT3 wide-body Z4 M Coupe, baby blue Motorsport GT wide-body E87 130i and a lurid pink E92 wide-body M3. In fact, the only understated sports car he’s owned over the last decade or so has been the Alpine white wide-body Z8 we featured back in April 2016. Thus, it’s no surprise that his other current cars (a red F56 Mini Cooper and a Fire Orange II i3 with black lightning bolts down the sides) are a bit loud as well. Of course, when you’re the head of Japan’s largest BMW tuning shop chain, Studie AG, you’ve got a good excuse to have ‘out there’ personal cars, as they also do double duty as demo cars, but Bob’s personal tastes remain the main reason he builds cars the way he does. 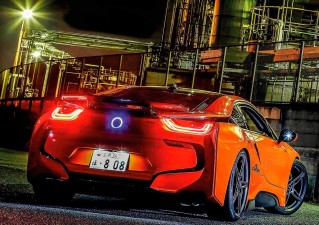 That’s why, when he originally purchased this 2014 i8, he knew it wasn’t going to remain stock for long. Its austere Sophisto grey certainly wasn’t doing it for him (and remember, when the i8 first came out, the bright colours you can now get through the Individual programme never existed), and while the base car was already a highly- competent performer, thanks to its low centre of gravity, centralised mass and all the other benefits a well-honed mid-engined carbon fibre chassis with lightweight composite panels can bring, it wasn’t really enough to get Bob’s juices flowing, prompting him to think that “In terms of mechanical stuff, irrespective of anything else, the first thing I thought when I got the car was that it lacked stimulation.” Not only that, but what stimulation BMW had tried to introduce by way of the fake engine sound pumped in through the speakers was, in Bob’s words “just noise”. So it’s no surprise that the aural aspect of the car was the first to be altered.

However here, Bob ran into a problem, and one that he would encounter several more times on his journey with the car – no one made parts for the i8 yet In the past, he could order things off the shelf for all his cars bar the Z8, but the i8 was so new, and so different, that neither the aftermarket, nor BMW itself, had got started on anything. Thus began a series of journeys to Japanese supplier ARQRAY (pronounced ar-kyu-ray, for anyone interested) to sort out the world’s first titanium exhaust for the i8’s little 1.5- litre three-pot. Normally, you might think that no matter how many meetings you had, it would be difficult to make a tiny triple like that sound good, but you’d be wrong. This one sports a thrummy, sporty idle, raspy burble on acceleration and pops and bangs like a busy firing range on change up and overrun. It really helps transform the character of the car and makes it much more the sporty machine you know any enthusiast would want. 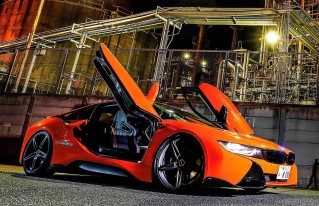 Next up came the handling. Initially, the complete lack of parts meant Bob had to rely on H&R lowering springs and 20-inch BBS RI-D wheels with sticky Advan rubber to help dial things up, but this was never going to work long-term, so he got talking to another Studie supplier, 3D Design, to see about making some coilovers. After months of testing and the land of teething troubles you’d expect from prototypes, Bob had the world’s first set of i8 coilovers on his car, which you can now get by way of special order if you’re in Japan. Add in the fact that by this time, AC Schnitzer had launched its carbon body parts and 21” AC1 forged wheels, which meant not only could Bob finally paint the car the colour he wanted (the stunning Fire Orange II factory hue) but also up the grip levels again by way of sticky ContiSportContact 5P rubber, and you had a car that not only finally looked the part, but cornered like it as well.

As Bob puts it, “The fact it feels light to begin with is a huge advantage in terms of handling and tum-in… and because the car’s basic ingredients [carbon chassis and sound fundamentals] are so good in the first place, the end result was really fantastic.

The car comers so well now, and it feels really great, With so much weight low down and in the centre of the chassis, the car just rotates around you even when stock, so strengthening that feeling, and fitting 21” Continental SportContact 5Ps that match the available suspension grip, means the overall grip levels are far higher. Basically it feels about 20-30% faster through the comers as a result. The fact it turned in so fast after these mods meant the brakes couldn’t keep up, so we upgraded those, too.” Indeed, you’ll notice there are now six-pot Brembos on the front to bring it down to a halt fast enough, and again, thanks to the lack of parts for the car, these were also custom-ordered. 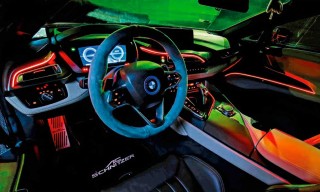 The custom theme continues inside, albeit on a much reduced level, thanks to custom re-trimmed Recaro Sportster front seats and matching re-trimmed stock rears, orange seat belts and a re-trimmed factory steering wheel with Alcantara on the rim and an orange centre marker. Of course, being an enthusiastically driven car, even though Japan has fewer speed cameras than many countries, Bob decided to fit a Yupiteru Z975Csd radar detector just to be on the safe side, as well as a Yupiteru DRY-WiFi V5d dashcam ensuring that, should the unthinkable happen and someone damage his pride and joy, he had evidence. Oh, and even though it’s an exterior part, we’d be remiss to ignore the cool little Studie Emblem Markers too, which put lights under the standard BMW roundels and add a lovely finishing touch.

Without a doubt, the whole lot comes together to form one of the best-looking and likely best handling i8s out there.

The Schnitzer body parts add a sense of aggression the standard version lacks, while the lowered stance and black-on-orange colour scheme really pops. The fact it’s already such a futuristic looker means the i8 draws eyeballs even in stock form, but in this guise, there’s nothing else like it Add in that unique, racy sound and you have a truly extroverted car that not only show’s off its owner’s personality but also the skills of Studie’s supplier partners. Indeed, one of the reasons Bob bought this car in the first place was not just its sci-fi looks and the fact it was the first mid-engined BMW since the Ml, but also because it represented the future – a future he and his team at Studie, as well as his suppliers, would have to learn about and get used to.

“From the first time I saw it in Mission Impossible and in subsequent spy shots, I thought it was a very futuristic car that BMW was using to try new things. From the body, to the hybrid system, to the small capacity three-cylinder engine, I felt this was a car BMW was building to showcase the future. And as a tuning shop chain, this sort of technology was something we needed to get a handle on,” Bob points out. This last sentence is especially true for a chain like Studie, because not only is it a BMW-only specialist, one of its key philosophies is that its shops don’t make things themselves – they rely on outside partners. Hence the purchase of the i8 wasn’t just so Bob and Studie could have a funky, top-of-the-range demo car, it was also to allow suppliers like ARQRAY and 3D Design to get a grip on the technology and learn how to make small-engined hybrids like the i8, machines that will inevitably form an ever-greater part of our automotive future, enjoyable. 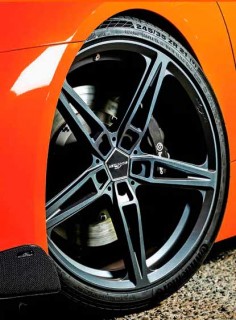 And while you could argue parts like the exhaust system and coilovers on this car don’t really represent a change from the status quo right now, the fact remains they were born of that need to master what’s coming; to make a highly futuristic car with a small, hybrid drivetrain and unique carbon chassis work better than market realities would allow BMW to from the factory. And in that respect, this car, and the products that have resulted from it, represent not only an important step into the future, but also act as a beacon – something to show that, while enthusiasts may worry about the future of performance cars and the changes ever-tightening regulations might bring, tuning will still exist, and passionate people within the industry will always find ways to keep the fire burning and make these new cars more enjoyable. And what a comforting thought that is.