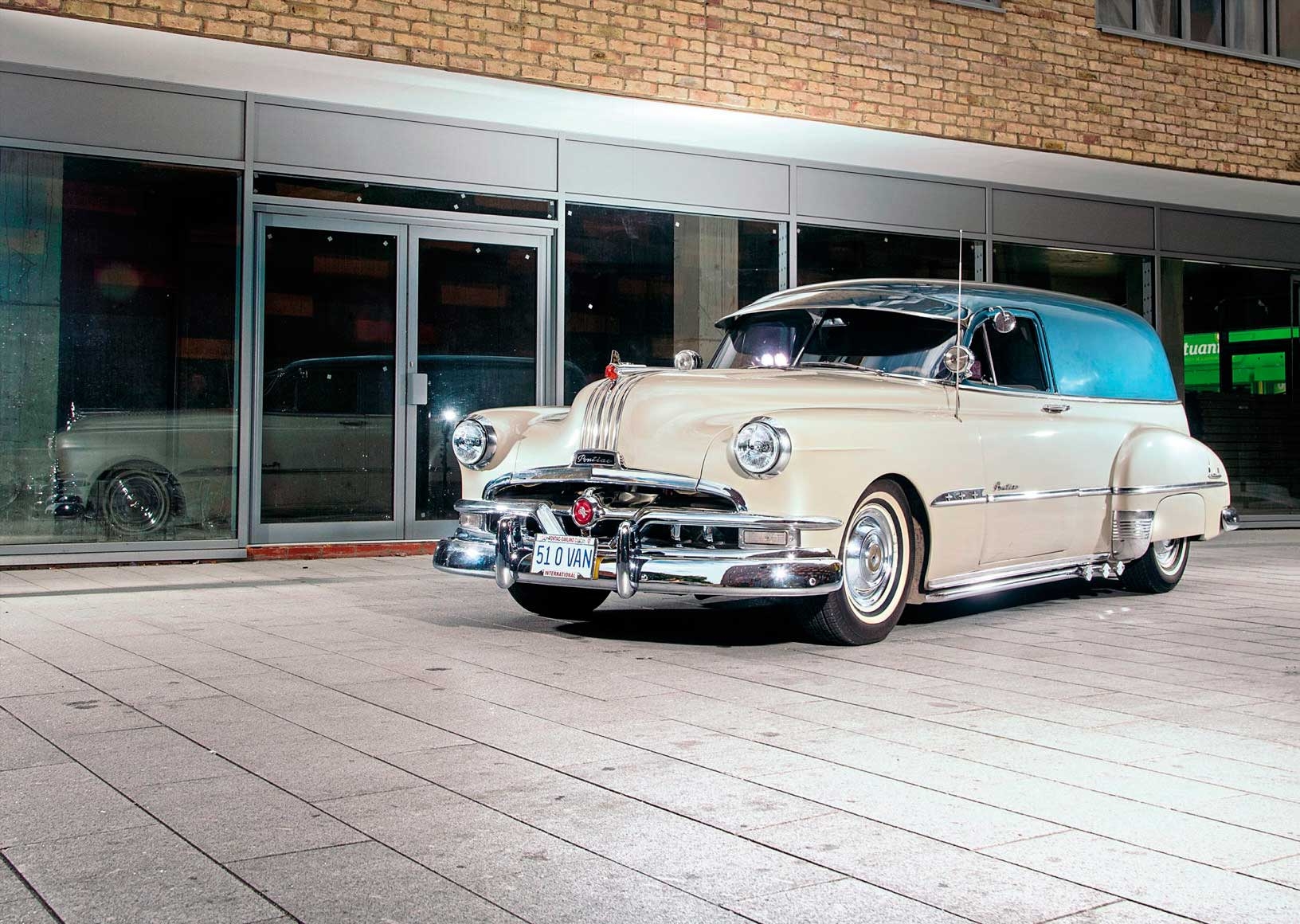 Should you ever plan to visit East London for some nefarious purpose, and not wish to be spotted during the process, I can highly recommend you don’t drive through in a 1951 Pontiac Sedan Delivery. If however you fancy chatting to every van driver, dustman and shopper on the high street – plus all their children – the Pontiac is the perfect vehicle. Everyone seemed fascinated by the appearance of the ‘1951 – most weren’t aware of its rarity, except one admirer who’d spent time living stateside. Fortunately the man who owns the Pontiac, Brian Howlett, is well used to enquiries from onlookers: “One of the most common questions people ask is, ‘is it a hearse?’”

Brian wasn’t searching for a van when he spotted the Sedan Delivery on eBay in 2014. “I was actually looking for a station wagon but I couldn’t resist the Pontiac,” he admits. “A guy had imported it and I don’t think he’d realized quite how rare it is. I went to have a look and it was parked right at the back of his yard. For me though it was love at first sight – I’d never seen one before in the flesh.”

Brian’s no stranger to old cars: “I’d had a 1949 Chevy Fleetline, a nice all-original car, but I sold that after two years and bought another one that I hot rodded. It was on air ride with a flamed paint job and I built a matching trailer. After a few years I felt I was getting too old for all that and fancied something a bit more original.

“I swapped the Fleetline and a modern 300C wagon for this. Then I had to build a bigger garage to keep it in.” Although Brian had set out to purchase something closer to factory stock than his previous Chevrolet, the Pontiac does boast a number of period customising touches, including the Appleton-style spotlights at the base of the screen and those lake pipe exhausts running along each sill. The exhausts (known as lake pipes after the dry lake beds where hot rods were raced) are connected but they currently have the plugs fitted, so the exhaust runs through the usual silenced exhaust. Remove the plugs and it becomes a straight through race system with greatly reduced back pressure and greatly increased noise.

Speaking of which, when Brian turns the ignition key it’s obvious it’s no longer stock under the bonnet either. “It’s got a 350cu in Chevy V8 with a TH400 gearbox,” explains Brian, “the work was done in the States before it came over. It’s still got the original Pontiac front clip (front axle and suspension) and the Pontiac drum brakes too, although at least they are power brakes.

“When I bought it the Pontiac needed a bit of work. It had this bench seat in it but it was only partially trimmed – I’ve since finished it off in the back. The dashboard had a cluster of gauges that were all six-volt, but I’ve added 12-volt versions. It’s an ongoing project really because I’m always trying to get it to drive better. People I’ve spoken to say ‘but it’s an old car, it’s supposed to be hard work to drive’ but I don’t agree. It’s never going to handle like a modern car, but there’s no reason it can’t be made to drive as easily as one.”

The Pontiac has also been lowered, says Brian. “It’s 2.5 inches down in front with dropped spindles and three inches in the rear with lowering blocks.” If you’re into your lowriders you’ll have spotted several custom touches so beloved of those cars: the louvres in the bonnet, the Frenched aerial on the nearside front wing. “It’s a Chicano style bomb,” admits Brian. “I understand it came in from Ohio, and was restored about 10 years ago by the president of the Oakland Pontiac Club. The Indian head still lights up too. It was repainted in period colors but with a pearl lacquer over the top. I saw a photo of it taken in the States and it looked identical to how I bought it. Other than that I know very little of its history, but I’ve been told they built about 1800 of them in 1951.”

In 1951 Pontiac marked its 25th anniversary. The division offered 28 models across its four series: Chieftain or Streamliner Six or Eight. Four-door fastbacks were discontinued as their styling became increasingly regarded as pre-war and the two-door version would soon be dropped too. Production began on November 27, 1950 and the cars were introduced on December 11. The four-millionth Pontiac ever built – an eight-cylinder hardtop coupe – rolled off the line the following August. The cars got a new grille with downward curved center bars, but were otherwise little changed on the outside, although advertising still called them ‘the most beautiful thing on wheels’. Engines were either a straight-six with 96 or 100bhp or – for $74 more – an eight-cylinder with 116 or 120bhp.

Being ‘America’s lowest price straight-eight’ they sold well, although it was increasingly apparent that V8 engines were the future. In fact behind the scenes Pontiac designers were already changing chassis for the V8 they hoped to introduce in 1953, but ultimately wouldn’t build until 1955.

So for the time being the eight was advertised as ‘built to last 100,000 miles,’ as Pontiac tried to outsell main rival DeSoto and perhaps steal a piece of its lucrative taxicab market. Standard transmission was a column-mounted three-speed all-synchromesh manual, but a four-speed auto was a $159 optional extra.

Customers often said they liked the way the Pontiac appeared to be more expensive-looking than it actually was – one of the ways that could be achieved was with optional extras. Cars were often ordered with options such as illuminated Indian’s head bonnet mascot, turn signals, a Polaroid screen visor and ‘rear fender panels’ (fender skirts – which almost every one that was built came with.) Our featured car has all those fitted but I’d be willing to bet it left the factory looking a little plainer than it does now.

That said, although the Sedan Delivery badge on the back door is almost certainly a later custom addition, the rest of the chrome appears to be what would have originally been fitted. Pontiac introduced its Sedan Delivery in 1949 with basic trim, but from 1950 the model had the DeLuxe brightwork. While Chevrolet’s version of the Delivery – with which the Pontiac shares a number of body panels – tended to be quite plain and very much bottom of the car range, Pontiac’s were available with two-tone paint and depicted in the 1951 and 1952 brochures with chrome gravel guards, full side trim and even whitewall tyres. ‘Smartest commercial car in America,’ read the copy, ‘ruggedness and dependability are combined with Silver Streak styling to give you the most beautiful advertisement on wheels.’

Accurate Sedan Delivery production figures are hard to pin down; one source suggests 1822 (and then 1382) for ’51, with 984 units for ’52 and 1324 built in 1953 – their final year of production. The total number built was 8776 for the five years. In that same period Chevrolet built 77,870. In 1950 alone (admittedly its best sales year) Chevy produced 23,045 Delivery models. With Chevrolet offering its plainer but otherwise comparable Sedan Delivery for less money there seemed little point in marketing Pontiac vans for such limited sales. By 1960 even Chevy sales had dropped to 3034 and the Chevy Sedan Delivery was axed too.

Although, as is often the way, they did things differently in Canada, where Pontiac continued to build between 300 and 1000 Chevy-based Pontiac Sedan Delivery models each year until 1958. The model gradually faded from the American manufacturer’s line-up as the popularity of the full-size Volkswagen Type 2 van and larger homebuilt panel vans such as the Econoline and Chevy’s Greenbrier increased. It would, however, achieve popularity again in 1971 based on the Pinto and Vega.

“Nowadays it really only comes out in the summer for shows,” says Brian of his ’51, “in fact one of the first times I drove it was to the Blenheim Palace show. I noticed there was a bumping noise from the rear, I didn’t realize but it turned out to be a back tire bubbling up and rubbing. When I stopped on the field you could hear it hissing – ready to explode. I later found out it was a steel belted tire and the belt had rusted. I went to change the wheel and discovered there were two different bolt patterns front and rear. Fortunately, North Hants Tires (www.northhantstyres.com/01252 318666) were there and sold me two new tires.

“I’m going to add power steering over the winter; you can get an electric steering kit that uses parts from a Vauxhall Corsa (whatever that is). My wife does enjoy shopping in the Pontiac because you can fit a lot in – of course there’s loads of space in the back. Plus I’ve just finished restoring a 1965 caravan so I’ll be using the Pontiac to tow that to shows.” With virtually no rear vision Brian has also fitted a reversing camera that switches on when reverse gear is selected. “I have even slept comfortably in the back of the Pontiac,” admits Brian, “although only once, when I came home rather late at night and didn’t want to face my wife!”

“SMARTEST COMMERCIAL CAR IN AMERICA! RUGGEDNESS AND DEPENDABILITY COMBINE WITH SILVER STREAK STYLING TO GIVE YOU THE MOST BEAUTIFUL ADVERT ON WHEELS…”

Door opens sideways. Blue and white two-tone theme continues inside. Reversing camera and screen make for easier parking. Poncho would make a great promotional vehicle. Lake pipes add a custom touch. Appleton light can be moved from inside. 350cu in Chevy V8 is hooked up to a TH400 gearbox. Now that looks cosy; no wonder Brian has had a kip in here!