Six steps to picking up the finest BMW E30 3 Series 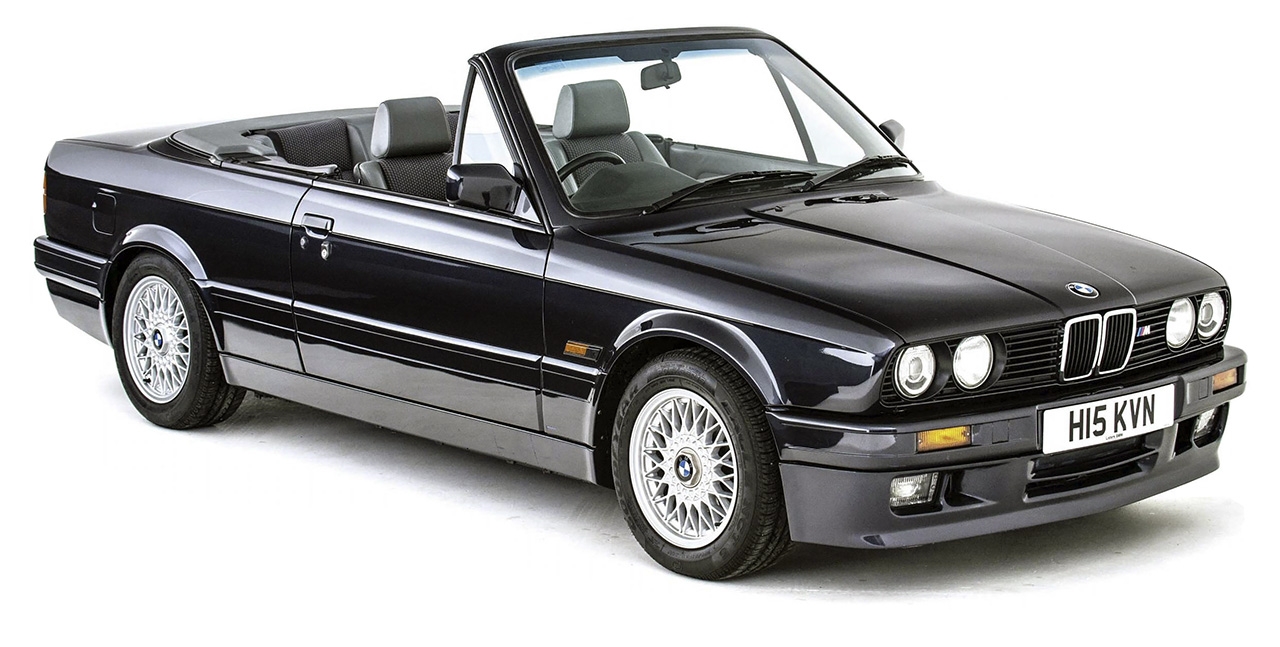 6 steps to buying the best BMW 3-SERIES E30. BMW 3 SERIES BMW’s symbol of Eighties aspiration is now a must-have, but you must buy wisely.

Barney Halse has been immersed in BMWs for his entire working life, and set up Munich Legends with his father Tony in 1991. For the past six years he’s helmed Classic Heroes, still with BMWs at the core of the company business.

Dan Norris bought Munich Legends in 2009 and now runs the sales and acquisitions side – standing at the pinnacle of an immense amount of collective knowledge gathered by the staff over 25 years.

Crisp handling and silky engines combined with timeless looks make the E30 3 Series a truly usable modern classic. As one owner put it, ‘It’s the perfect symbiosis between pure driving fun and reliability.’ Once described by our sister magazine Car as being ‘bang in the middle of readers’ aspirational heartlands’, the image-defining Eighties saloon is the original ‘Ultimate Driving Machine’.

Rust is the biggest killer of E30s, and early cars suffer worse than post-1988 versions, which had some galvanising. Barney Halse warns that you can easily rack up £15,000 properly restoring a rotten body, so unless you’re sure of what you’re looking at, walk away from a well-rusted car. ‘The problem is,’ he explains, ‘that when they were cheap cars people just bodged them up, so we find they’ve been patched and patched. They rust around the rear wheelarches, and under the front “jacking pads” (the flat area under the front of the sill that looks like it’s suitable for jacking but will squash if used so) you want to see the factory profile with a lip, rather than a flat plate. They go at the bottoms of the front wings, and if it’s bubbly there the sills will almost certainly have gone too.’ Repairing this area costs £840-1680 for both sides, and sorting the rear arches and sills can cost from £720- 2000 per side, including painting the rear wings. M-Tech body kits can hide rust.

Wings are fairly cheap – £168 each from Munich Legends or £456 fitted and painted. Further back, check the seams between the rear panel and the wings, and around the rear numberplate lights. ‘You can put rear wings on them,’ Dan Norris says, ‘but it gets expensive and likewise don’t ignore rust in the roof around the sunroof – it might not be structural but it’s a complicated repair, though the actual sunroof panel is only £250. They rust in the windscreen scuttle tops too, and new panels just aren’t available at the moment.’ Making up repair sections and letting them in costs £420-660 per side, more if it’s reached the screen rubber meaning the glass has to come out. There are three types of convertible roof – manual, electric and electro-hydraulic, in order of complication and cost of repair. A new covering costs about £2k.

All the motors are robust, and will easily do 200,000 miles if maintained properly. Some of the very early four-cylinder cars had the M10 engine carried over from the E21 and ’02 series, which drives the camshaft by chain and is very robust, but most will have cambelts, which need changing every three years or 36,000 miles at a cost of £280 (Classic Heroes) to £500 (Munich Legends), Barney Halse says, ‘You might as well change the water pump while you’re in there – another £78.’ Valve clearances are adjusted by eccentrics clamped in the rocker ends and are easy to adjust at home. The twin-cam M42 in the 318iS is a bit more troublesome, ‘If it won’t go over 4000rpm it’s likely worn cams or hydraulic lifters.’ Engine oil leaks are a bigger problem on E30s than that traditional BMW bugbear, cracked cylinder heads, ‘We change more head gaskets due to oil leaks than we do for combustion problems,’ says Barney Halse. The price to change a head gasket on a six-cylinder car is between £860 and £1440, depending on where you go. ‘By now you need to be looking at the sump gaskets,’ advises Barney.

Bosch Motronic Engine management is described as bulletproof, though mass airflow meters can play up and cost £377 – changing one is a half-hour job, £468 all in at Munich Legends. ‘If the CO won’t adjust we take them apart, clean the contacts and recalibrate,’ says Barney. That costs £78. The cooling fan uses a viscous clutch to regulate its speed (with an extra electric fan on cars with aircon), and is a known weak spot, with a failing clutch causing the engine temperature to rise dramatically when the car is left to idle. E30zone suggests the ‘newspaper test’ – roll up a newspaper and poke the fan with it with the engine running. A good clutch will shred the paper, but if the fan stops the clutch is broken or failing. It’s less than £40 for a fresh one.

Five-speed manuals are all by Getrag and four-speed autos are by ZF. ZF also made the 4wd iX system on 325is. Early 316s and 318is had a four-speed manual, but they always had a five-speed option so you’re very likely to encounter one and it will need to be cheap, likewise early (up to 1985) three-speed autos. The 318iS has dog-leg five-speed gearbox like European M3s. Clutches cost between £498 (Classic Heroes) and £840 (Munich Legends) to change, though the CV joints ‘never really fail’ according to Barney. Get underneath and make sure the differential’s not leaking and the mountings aren’t perished, as they cost £120 to change.

E30 electrical systems are pretty robust apart from the headlight wash-wipes ‘Which never work,’ says Barney. ‘You can spend lots of money on new motors but we mostly just disable them in the parked position, and the same goes for the headlight levelling.’ If you insist, or want to use inoperative wash/wipes as a bargaining point, then new motors cost £85 per side at Munich Legends, or a complete system rebuild is £548 at Classic Heroes.

One of the joys of the E30 is that consumables such as suspension joints and brake parts are ‘ridiculously cheap’ according to Barney Halse. ‘If a lower balljoint goes, you change the whole wishbone.’ Complete front wishbones and bushes cost £367 fitted at Classic Heroes, Munich Legends says £156 per side. Just replacing the wishbone bushes costs £110. The rear end isn’t adjustable, but subframe bushes can go soft and affect the handling – check whether it knocks on the test drive. Replacing them costs £240.

Interior options were immensely varied and too numerous to mention here. Though leather is easy to retrim, the original cloths are no longer available. Make sure the electric windows work (they can be slow) as well as the sunroof, if fitted. Inoperative aircon is almost never a case of simple regassing, so use it as a bargaining point. Central locking failure is often due to moisture corrosion in A-pillar connectors, is free to fi  but is another bargaining point.

Replacement roof fabric can cost up to £2000. Cylinder head gasket changes can cost from £860 for M20 six-cylinder engines.

Richard Lake Richard Lake’s 325i Motorsport is car 21 of 149 UK examples built, and he’s a serial E30 owner, having previously run an M3, ‘I think it all started when I was on my work placement and was given the boss’s car to run an errand in – a 325i. Of course I hit the rev limiter and it cut out, so I thought I’d broken it! His boss had a Porsche 930 and I’ve now got a 3.2 Carrera, and a 928… I’m gradually acquiring the full set! ‘Barney at Classic Heroes found this car for me, with the rare ‘bubble’ leather interior, and we’ve changed the wishbones and bushes and all the coolant hoses – Barney is very keen on his preventive maintenance. ‘It’s a proper four-seater and I just can’t think of a nicer place to be.’

James Strugnell As a teenager the E30 325i Cabriolet was one of the cars James Strugnell lusted after and now more than 20 years later he’s the very proud owner of a 1990 example. ‘It’s a timeless shape and gets many admiring glances. It’s my ideal spec of close-ratio manual sports gearbox, M-tech suspension and manual roof. It never fails to put a smile on my face. Performance and handling (the latter aided by a complete suspension refresh last year) compare very favourably with other more obviously performance-orientated cars. ‘It’s been entirely reliable, with correct servicing and preventive maintenance being the key. It’s suffered the rear wheelarch and lower sill rot and is undergoing a bare-metal respray, which will be the biggest expense to date.’

David Evans Dave Evans has two E30s, one of which, an early 323i, appears in BMW’s current marketing campaign for the new 3 Series, along with his E21 316.

Though he’d owned an E21 when much younger (‘you thought you were the bee’s knees, and you’d march up to the bar and slap down your BMW keys. They were special then; now everybody’s got one’), it was an E23 7 Series ‘picked up for a song,’ about six years ago that rekindled the interest. ‘I joined the BMW Car Club and since then I seem to have gathered up six classic BMWs including two E30s – the 323i and later an ’86 325i Convertible. My 323i had already had repairs to both rear wheelarches by the time I got it, but I had it had a few little dings and knocks. I’ve had no engine problems with it.’

Major update in 1987 involves restyling of bumpers (no chrome) and new, larger rear lights, and brings the option of an estate), marketed as the Touring, plus 318i Convertible introduced. Base M10 engine replaced by 1596cc sohc (by belt) M40 using hydraulic tappets and Motronic 1.3 management/injection, though in South Africa old 316 continues until 1991. The BMW 318iS appears in 1989 with dohc (by chain) 16v 1796cc M42 four-cylinder using individual Motronic 1.7 firing coil packs for each cylinder, yielding 136bhp/127lb ft. Turbodiesel M21 324td arrives with 116bhp/163lb ft. Convertibles get 1987 facelift in 1991.

As both experts and owners remind us, BMWs are hard to improve, and Barney points out that, long term, unmolested cars are more valuable. With so many models to choose from, the easiest way to improve your E30 is to simply swap it for a better/faster/newer version to the specification you want.

Bilstein dampers and progressive-rate springs give a sportier ride and slightly lower the car but it remains compliant and totally usable, Barney says. Price for these is £900 including labour, and Continental or Uniroyal rain tyres are favourite choices for the E30 chassis. ‘Strut braces tend not to do anything, though we do use some polybushes for track cars, or if you want it sportier.’

Though E30s aren’t as tail-happy as the preceding BMW E21, some owners like to fit a steering rack from an BMW E36 or even an BMW E46 to quicken up the steering, giving the driver a better chance of staying in front of the car.

‘It’s the perfect symbiosis between pure driving fun and reliability’  BMW E30 is tough if looked after, expensive if neglected. While it’s easy to retrim leather interiors, cloth coverings are no longer available.