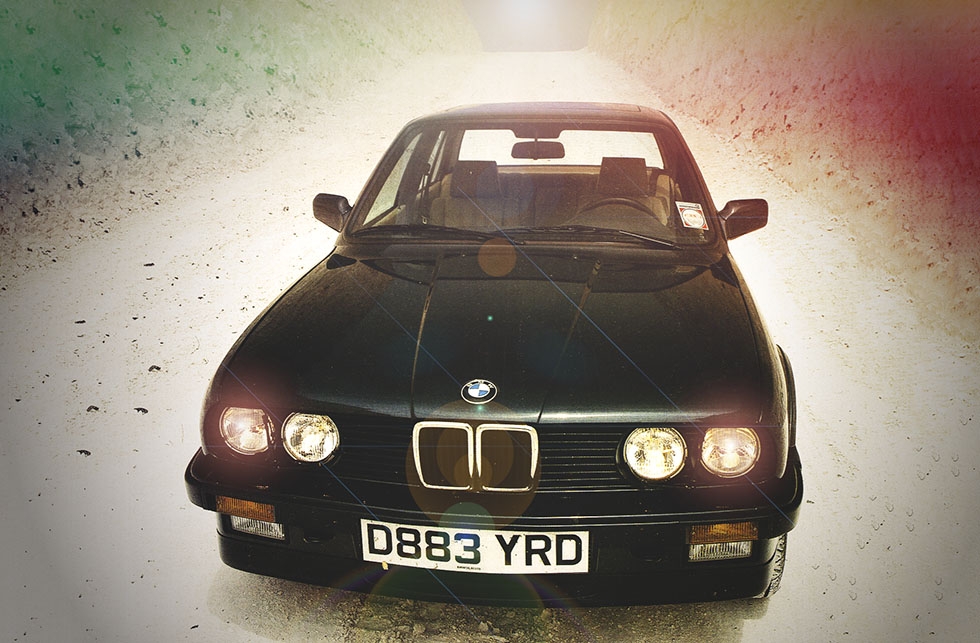 At last the four-wheel-drive 325i has made it to Britain. Wet weather handling and traction benefit-but refinement suffers. Photographs by Maurice Rowe. The BMW 325iX E30 badge on the bootlid is one clue, the subtle wheel arch and sill extensions are another; line the 4WD BMW up against its rear-wheel-drive 325i counterpart and you will notice that it stands taller (but only by 20 mm/0.8 in). Only the aficionado will spot the 4WD derivative from the outside: at BMW, understatement is the name of the game.

Originally, BMW (GB) Ltd had planned not to import either the 325iX or the M3 E30 production racer. Now the company have changed their mind and offer both cars in left-hand drive. The 325iX E30 costs £18,345, but you can save £495 by opting for the two-door or spend £1060 more on the four-speed automatic version.

In concept, the four-wheel-drive transmission is very similar to the Ferguson system used in the Ford Sierra 4×4. Mounted behind the unchanged five- speed manual gearbox is a centre transfer gearbox (containing a ZF planetary differential) that delivers 63 per cent of the power to the rear wheels via a singlepiece propshaft and unchanged rear final drive unit. The other 37 per cent goes forwards by means of a chain and offset propshaft to a newly developed final-drive unit bolted rigidly to the engine sump.

Viscous couplings – produced by Visco Drive, a joint Ferguson/ZF company – are used in both centre and rear differentials. These further alter the torque split in the event of either axle or rear wheel losing grip to give improved traction in very slippery conditions. There is no viscous coupling in the front differential because, according to BMW, this would affect the steering; for the same reason, equal length front driveshafts are used.

One difficulty that has been overcome is the ability to make ABS brakes work on a car with 4WD and limited slip differentials (with Audis, for example, the ABS has to be disabled when the diff locks are engaged).

Nearly all the front suspension components have been altered for the 4WD model. A new cast aluminium front sub- frame was needed, with the steering rack relocated ahead of the front axle centre line. Altered pick-up points create a negative, scrub radius for the first time on a BMW, while the front track is 13 mm/0.5 in wider.

The 325iX is faster and more accelerative than the obvious 4WD rivals, and close indeed on top speed to the much more expensive Audi Quattro (131.7 mph). But both the latter and the Mazda 323 4×4 Turbo outsprint the Bavarian, covering the 0 to 60 mph yardstick in 6.5 and 7.1 sec respectively.

Subjectively, there’s a notice-able surge in power once the tachometer needle passes the 4000 rpm mark, where maximum torque is developed. Yet the fourth and fifth gear figures show that the BMW is not short of low-down lugging power, even though it can’t quite match the figures of the Sierra 4×4 and Mazda. From 30 to 80 mph in fourth gear, all the 20 mph increments are covered in 8 seconds or less – a feat not possible with the Audi or Subaru.

Not that there’s any cause to be lazy with the gearshift: like that of just about every other contemporary BMW, it is a model of lightness and precision. But, as the change up points show (32, 55, 87 and 121 mph, at 6500 rpm), the ratios are quite Widely spaced.

Unfortunately, the BMW’s spirited performance has to be paid for at the pumps, but our 22.3mpg overall fuel consumption figure is practically identical to that of the ordinary 325i or Ford Sierra XR4x4 – both of which returned 22.4 mpg. With a touring consumption of 29.5 mpg, the 4WD BMW is six per cent worse than the standard car, giving a rather limited 357-mile range on the 55-litre tank.

Of more interest is how the permanent 4WD transmission affects the handling. Essentially, the 325iX feels no different to the rear-drive car: the negative offset geometry has no notice-able effect on the steering, which now has 3.9 turns lock-to- lock for a slightly poorer 10.6 m turning circle.

Cornering grip is good (the test car was fitted with optional alloy wheels and Michelin 200/ 60 VR365 TDX tyres), but the enthusiast may well be dis-appointed by the large roll angles as a result of the raised suspension, and no reduction of understeer as the limit is approached; furthermore, the 325iX displays no better high-speed stability than does the rear-drive car.

But there are some gains. With the four-wheel-drive car, full power can be safely deployed in tight first or second gear turns without pushing the tail out of line, while cutting the throttle in mid-bend merely helps the nose tuck-in, without causing oversteer.

Really though, you need to drive the 325iX on wet roads to appreciate its virtues. With four- wheel drive, the previously tricky handling is tamed. No longer will an insensitive bootful of power precipitate a lurid tail slide. Instead, if the car slides at all; it will do so safely, all-of-a-piece.

Like all BMW 325s except the Sport’ (fitted with “M Technic’’ suspension), the 325iX has “Sports” suspension with gas- filled dampers. The result is a firm low-speed ride that gives way to more supple behaviour the harder the car is driven and the bumpier the road becomes.

Disguised from the outside by close-fitting wheel arch extensions, the taller ride height is not obvious from inside the car. But the extra ground clearance does endow the 4WD car with surprising off-road potential.

From past experience, we know the BMW six-cylinder engine to be one of the quietest and smoothest operators around. But installed in the 325iX there’s uncharacteristic harshness transmitted through the bulkhead, while the muted engine only serves to emphasise gear whine from the more complex transmission.

The finish is of a very high standard, the quality and fit of the external mouldings being especially good. Inside, the fit-tings appear durable, and the test car’s beige leather trim makes a welcome change from the usual sombre black.

In just about every other respect, the 325iX mirrors the rest of the 3-Series range. It pampers the driver with comfortable multi-adjustable seating, faultless controls and superb instruments but the compact body is not the roomiest for rear-seat passengers.

Equipment is fairly comprehensive, but it’s worth noting that our car’s headlamp wash/wipe, electric sunroof, sports steering wheel, alloy wheels and TDX tyres, metallic paint and leather trim etc are all costly extras that collectively bump up ‘ the price to more than £23,000.

BMW have done a thorough and professional job in adapting the 325i to accept permanent 4WD transmission. The handling is safer under all conditions while the potential benefits on snow and ice are obvious. Ultimately though, this car is a little slower, less efficient and not as quiet as the rear-drive 325i. And we feel sure the disadvantage of left-hand drive will seriously limit the appeal the BMW 325Ix E30 to UK buyers.

The previous Audi 80 quattro was a capable car but Audi’s latest is better with its Torsen centre differential. Handling is superbly balanced, the old car’s tendency to understeer strongly when pushed, hard has been eliminated; grip is good in all conditions. Ride is only average and performance of the 1.8 engine comfortable rather than spirited. Attractive, sleek shape, fair packaging and good ergonomics, well finished too.

Top six-cylinder M20B25 rear-drive version of BMW’s popular 3-Series E30, the 325i is fast, smooth and well equipped. Performance is good, engine refinement ranks with the best. Excellent dry road handling, but needs watching in the wet. Gearchange, instruments and ergonomics are excellent, accommodation poor for the price. All 325is now have ABS brakes and “Sports” suspension, but the SE pack adds power steering, sunroof, electric windows and alloy wheels.

Japan’s pint-sized quattro appears to have it all: a turbocharged 16-valve engine delivering 148 bhp, permanent 4wd and disc brakes all round. Against the clock it is very rapid though it does need to be worked hard. Handling is entertaining but power steering lacks real feel and cornering grip is average. The ride is good for a sporting car, but for all its tempting specification, the Mazda lacks the image and appeal to justify its price.