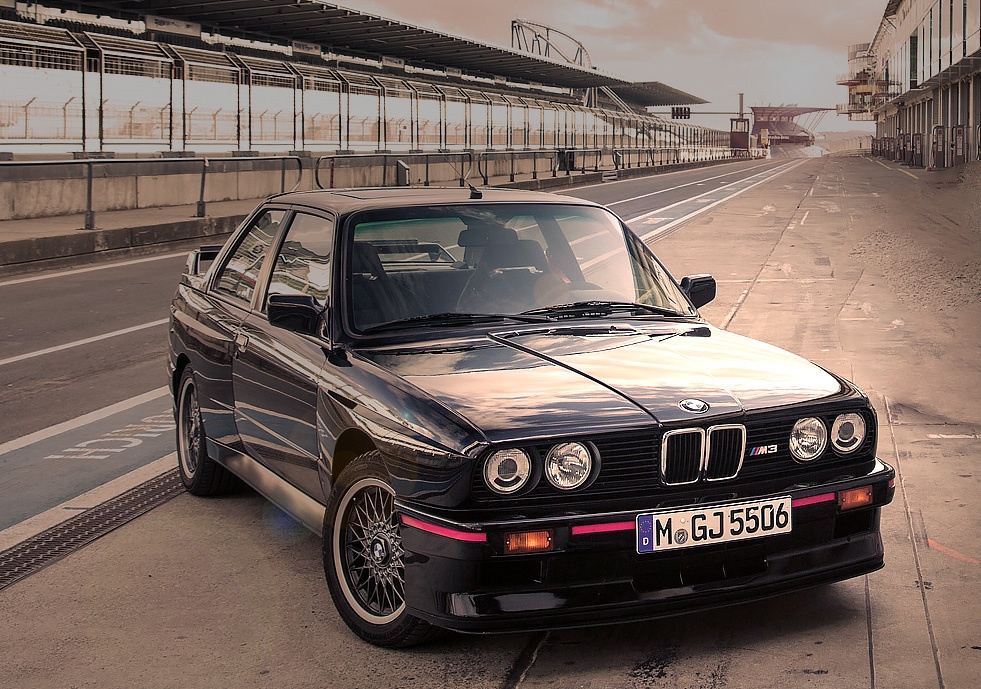 1988 BMW M3 Evolution E30 test extra. Subtle body alterations give little clue to this BMW’s added muscle. Neither do the performance figures. In fact the Evolution makes the ordinary M3 E30 look like good value. The etched aluminium plate screwed to the centre console of each M3 Evolution displays a number between one and 500, a visual reminder that this is the most exclusive and potent E30 3-Series yet. The car is a product of homologation regulations in international racing which permit a model to ‘evolve’ once 5000 examples of the original have been produced. Only 40 will come to the UK, all in left-hand-drive form like the ‘standard’ M3. It costs £26,960. 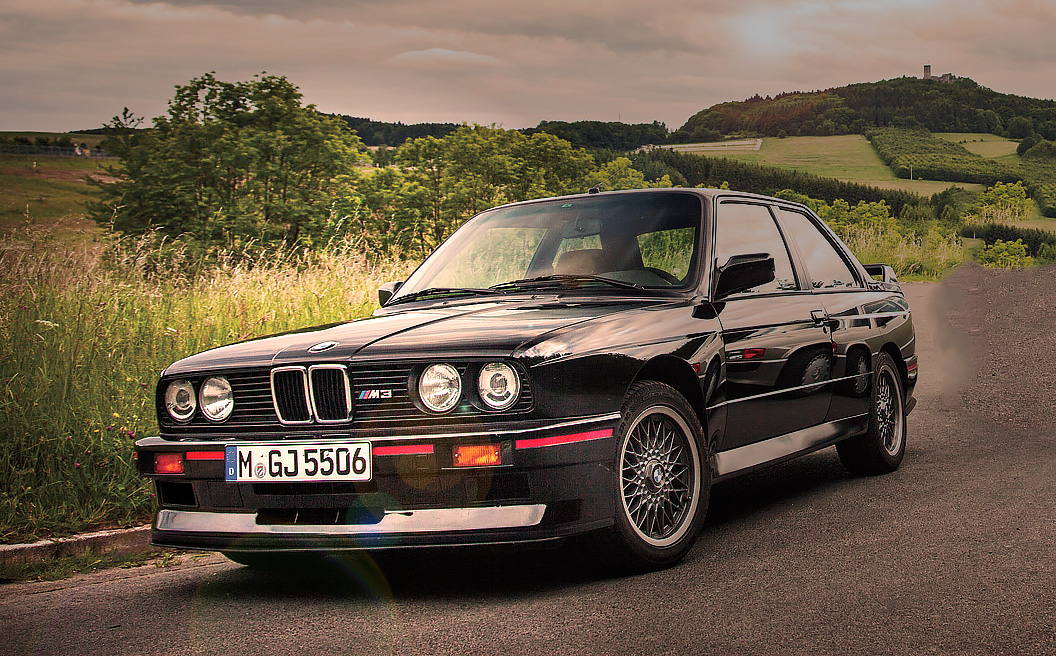 Revisions to the energetic 2.3-litre four-cylinder engine have boosted power by 10 per cent to 220bhp but, from the outside at least, an untrained eye will probably pass over the modifications that announce the extra muscle. The Evolution’s more jutting chin spoiler with brake cooling apertures in place of fog lamps might go unnoticed. The same is true of the additional ramp beneath the hoop of its rear spoiler, and larger diameter wheels with wider and lower-profile tyres. 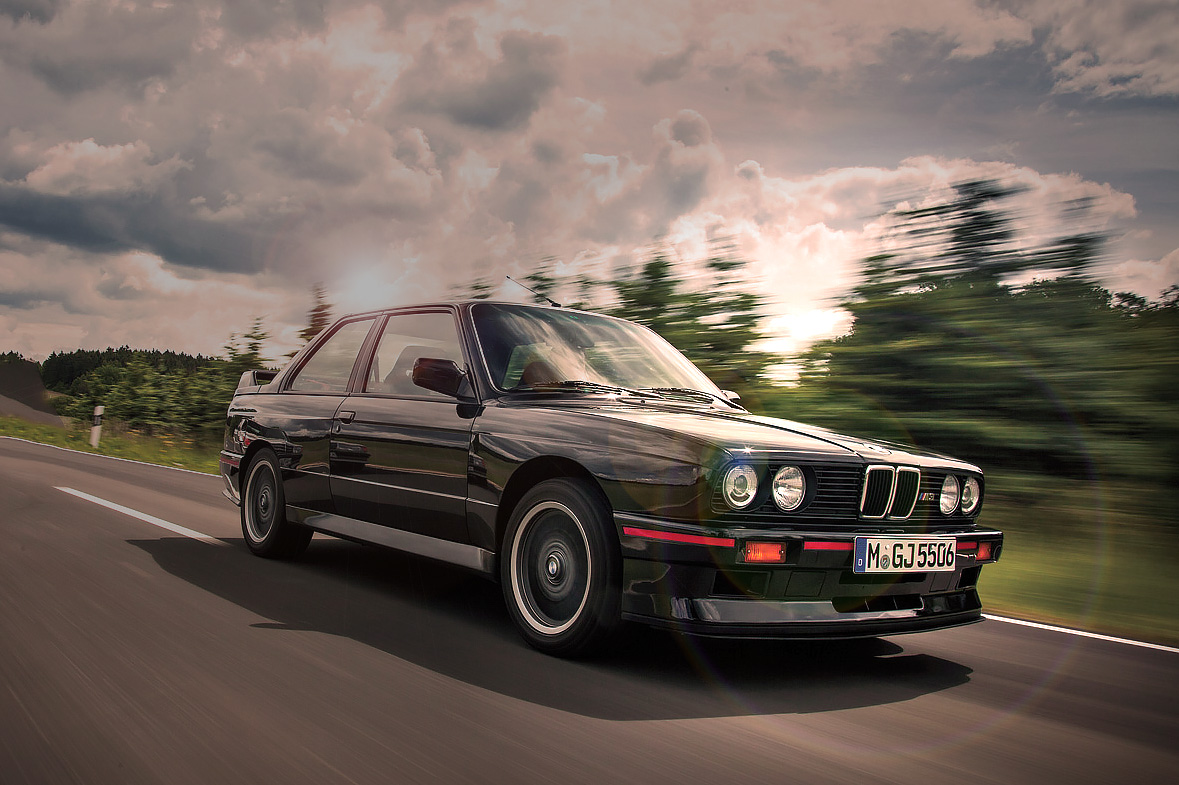 This cosmetic fine tuning leaves the drag factor unaltered at 0.33 (the standard E30 3-Series, is 0.38), achieved partly through structural modifications to the M3 shell: steel wheel arch blisters and a more steeply raked rear screen blended with a raised boot line to engender a coupe-like profile. BMW has thinned the glass of the back screen and side windows and lightened the plastic bootlid and bumpers to pare 22lb off the overall weight.

The sight beneath the bonnet is an altogether more extrovert testimony to the Evolution’s potency — the canted M-Power unit has its white cam cover and air box flashed with the blue, purple and red Motorsport colours.

The extra 20bhp comes from new pistons that raise the compression ratio a half point to 11:1, reprofiled camshafts, a modified air intake system and lighter flywheel. Naturally, there is an altered chip within the Bosch Motronic brain to complement the new specification. Both power and torque peaks are higher but occur at the same points. Thus the engine develops 220bhp at 6750rpm and maximum torque of 181 lb ft at 4750rpm. 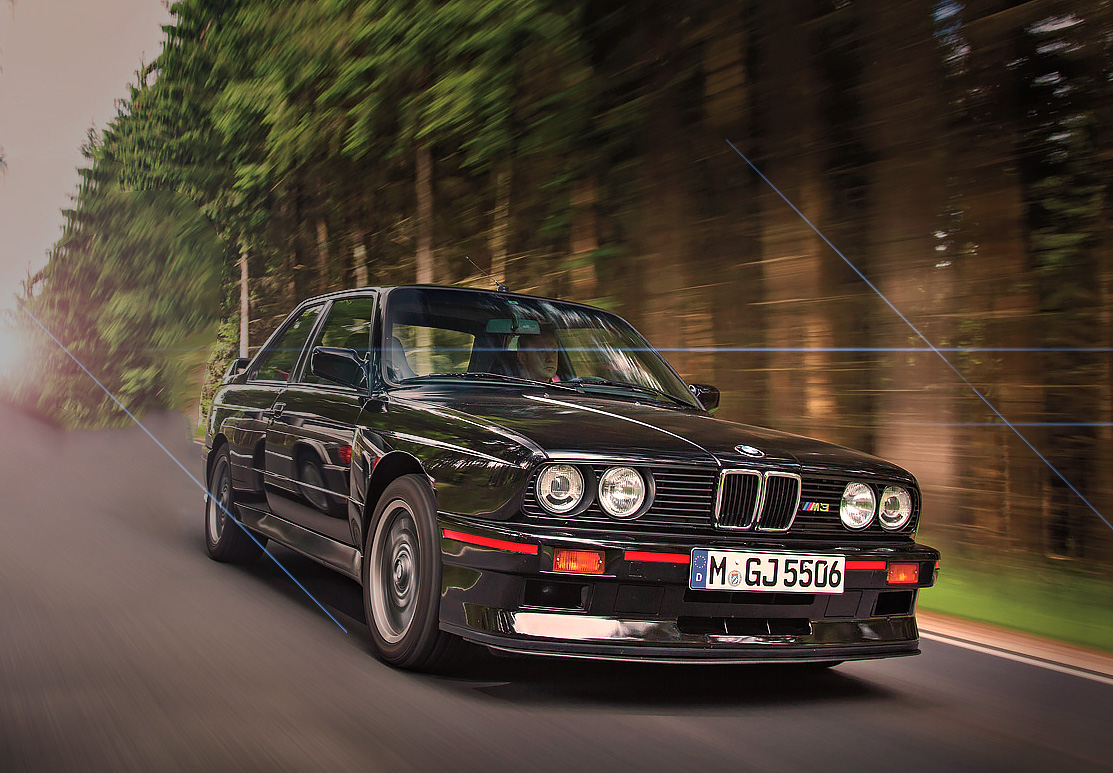 Suspension follows other E30 3-Series cars: MacPherson struts up front and trailing arms g at the rear — but lower, firmer and with revised front wheel geometry. Steering is by power-assisted rack and pinion and braking through enormous 11ins discs front and rear,supported by anti-lock.

The E30 M3 Evolution has a higher top speed but slower acceleration than the plain M3, simply because BMW has given it a longer-striding rear axle ratio that raises overall gearing from 21.3mph to 22.2mph/1000rpm. While this does not prevent it from reaching 146mph (4mph up on the M3), it does handicap its acceleration and in-gear pick up: just 6.6secs to 60mph and 17.8secs to 100mph from standstill is very quick but overshadowed by the M3’s 6.5 and 17.2secs. The deficits are greater when lugging ability is analysed, the Evolution falling on average a second in arrears. But across the overtaking 30/70mph span it trails the M3 by only a fifth of a second at 6.3secs.

The character of the BMW’s engine remains largely unaltered. A rather lacklustre performer in the lower reaches of its rev range, it is fired by a relentless urge as the revcounter needle touches 4000rpm. Shortly after, 5500rpm marks a second spike in the engine’s delivery and a glorious howl accompanies  progress past the peak power point and on to the 7250rpm rev limit. Extracting the most from the M3 requires vigilant use of its carefully chosen gearbox ratios. Pull out to overtake with the rev counter needle languishing around 2500rpm and you have time to reconsider the manoeuvre. Do the same at 4000rpm and you wonder where the traffic went.

The engine is never happier than when it is spinning towards the revlimiter on full throttle. As it churns into life it sounds lumpily unrefined and under part throttle it’s depressingly ordinary. Give it its head and it is transformed into the slightly coarse but wonderfully vigorous racing engine that it was designed to be.

In light of this, economy is remarkably good. Overall, the Evolution returned 24mpg, a figure nearly 4mpg better than the original M3’s and slightly better, than the results recorded by its nearest rivals. In gentle driving the fuel tank’s 15-gallon capacity should provide a range of around 400 miles.

As mentioned, the gear ratios are well chosen direct top proving a useable ratio while aiding relaxed motorway cruising of 70mph at 3200rpm. Shift quality is equally important, especially with left-hand drive, and here the dogleg Getrag gearbox is only just satisfactory. Crisp changes remain elusive, the lever requiring firm, positive movements to be guided smartly around its gate, though a well-weighted clutch assists the process.

The chassis gives its best when the massive I grip of the 225/45 Michelin MXXs is exploited. You may think that this is a task only for the brave or foolish, considering that 220bhp is being transmitted through the rear tyres. In fact, they remain stubbornly glued down, their grip in the dry resisting all but an ill-judged application of power in first gear.

A tentative approach produces fail-safe responses — at most, a gradual build up of understeer communicated lucidly through the steering wheel. In answer to a snap-closed throttle mid-corner there’s a casual transition back to a neutral cornering attitude. Show more commitment and the car’s handling is elevated to another plane: its sense of purpose snaps into focus.

Powered firmly through long bends the chassis reveals remarkable poise and agility. It flicks through a series of corners with finely controlled body movements and absolute precision. Only the steering’s low gearing (3.6 turns across locks) detracts from the pleasure.

The test car was fitted with optional damping control that offers ‘comfort’, ‘normal’ and ‘sport’ settings, selected by a dial on the centre console. Normal corresponds roughly to the M3’s settings while comfort provides a welcome amount of suppleness around town, and sport tightens the chassis, providing particularly sharp reactions on demanding roads. But normal strikes a good balance, so the £1388 might be better spent on other options.

On any setting the car rides firmly, and becomes agitated on its stiffest setting at anything below 50mph. The higher the speed, the better the ride with only a mild fore/aft pitch over undulations to upset passengers.

Huge disc brakes, ventilated at the front, have no difficulty matching the car’s performance, and come with the added safeguard of anti-lock as standard. Our fade test presented them with no problems but the pedal of the test car, while progressive, felt mildy over-servoed and light. The anti-lock cuts in at just 40lb pedal pressure to give an excellent 1.12g stop.

Noise levels are surprisingly low for such an overtly sporting car — when the thrummy four-cylinder engine isn’t being worked hard, that is. Long journeys are comfortable thanks to subdued wind roar and surprisingly well suppressed tyre rumble.

All Evolution cars are trimmed in what BMW calls silver. This is light grey leather for the seat sides front and rear, with checked cloth inserts. The Motorsport colours are pinned to each seat back and appear on a spoke of the steering wheel, as well as the instrument pack, which has bright red needles for its gauges.

The rest is usual 3-Series E30, which means the driving position is sound, fine tuning being assisted by a base cushion which tilts and can be extended. Pedal layout is excellent so heel and toe gearchanges come as second nature, and there is a very substantial left footrest. Although driver and front seat passenger have a generous amounts of space, the rear is rather cramped.

As with any German car, the list of standard equipment is short and the list of options long. The test car was fitted with more than £3500 of them including damper control, headlamp wash/wipe, and sunroof.

The Evolution is little different from the original M3 E30. It has the same blend of searing performance, phenomenal grip and impeccable manners. Exclusivity hardly comes cheap at £28,000 but then prices commanded by used examples of Ford’s evolution Cosworth RS500 are higher now than when new. 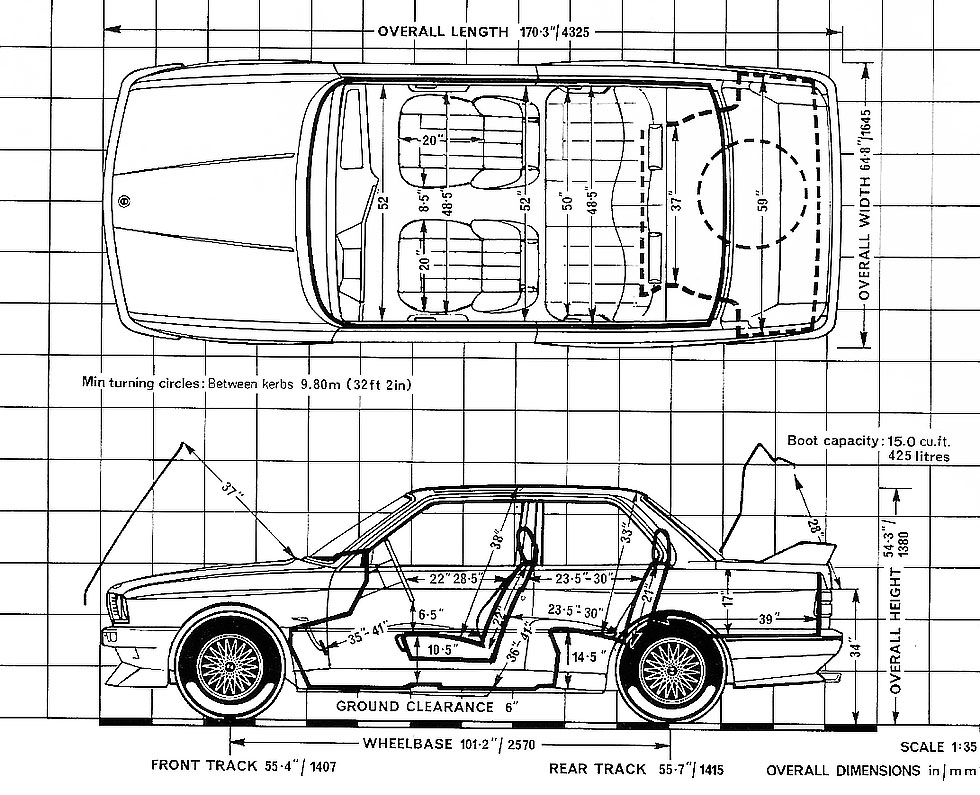 The UK’s allocation of 40 Evolution M3s E30 has already been sold. The good news is that BMW is to continue production of the original M3 beyond the 5000 that allowed the Evolution model. At £23,550, it looks like a bargain.

Bright red needles on the dials and Motorsport stripes identify this as an ‘M‘. Engine lifts M3’s skirts at 4000rpm and really lets go at 5500. A howl accompanies you past peak power and on to the 7250rpm red line. Despite this, it managed a creditable 24mpg.