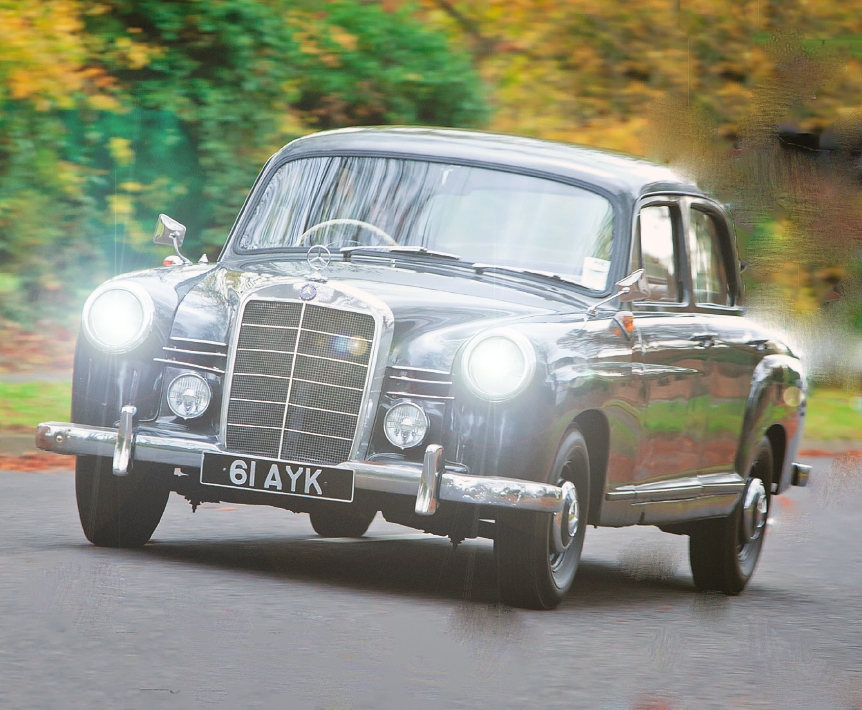 Why I love the Mercedes-Benz 190D W121. The challenge of driving classic motorcars is lost on the vast majority of their modern equivalents, and a brief encounter with a 1960 190D Ponton made one journalist realise just how much of a shame that is.

HAVE TO ADMIT THAT

I’m a bit of a sucker for any car that needs a brief lesson in how to get it going, how to keep it going, and then how to stop it. The fact that all you know about driving is about to be turned upside down, while a nervous owner sits next to you as you take the wheel of his pride and joy, makes a car more compelling.

You don’t get that feeling of the great unknown in modern cars. You simply get in, turn a key – maybe not even that – and away you go. You head down the road, and other than checking the gearlever to ascertain the location of reverse, the gears are all where you’d expect them to be, with perhaps a couple more thrown in for better fuel consumption. Then you park up, switch off and walk away, job done.

“You need to let the glow plugs warm up first,” explained the owner of the W121 190D I’d come to photograph while pointing to a perforated metal cover on the dash, behind which resided a thick wire serving as the link between the battery and the glow plugs of the four-cylinder OM621 engine. This was 1950s technology in action (or should that be ‘inaction’?) – no light on the dashboard that extinguishes after a second or two, just a bare wire that takes about 10 seconds to reach 520C, give or take, before you can turn the key further in the ignition to engage the starter motor and bring the engine to life.

With the diesel engine hammering away in the background, the next lesson focused on the column mounted manual gearshifter, a concept that modern design has left behind. But by positioning the gearlever on the steering column, it allowed a third person to sit up front, or a loved one to get closer on the journey, assuming they didn’t mind resting their feet on the transmission tunnel.

As always, the key to getting a car moving with column mounted gears is to understand the gate, usually in an H pattern layout.

And it’s also useful to find out where reverse is before you set off, just in case a dose of unfamiliarity, or nervous adrenaline makes you miss your intended ratio and cause a crunching of gears with an added wince from the owner.

Then there is the matter of engine inertia, and the effect it has on your slower than usual gear changes as you familiarise yourself with the gearbox. Acceleration requires a little blip as you lift, then a defined double action shift, first to neutral, then a second blip on the throttle before taking the lever from neutral to second. This is called double declutching, and if you are under 40 you’ve probably never had to do it, except to try your hand (and feet) at ‘how they used to do it in the olden days’.

The first few changes in the 190D went well and the owner even complemented me on my mechanical sympathy. That all counted for nothing, however, as a junction approached and the down changes came thick and fast. While in second gear, a gap appeared in the traffic so I put my foot down, but with only 49bhp on tap, and a worryingly small 80lb ft of torque at my disposal, there was little response from the car. I quickly went for first gear, but a hurried change before the clutch pedal was fully to the floor brought forth an almighty objection from the gearbox, a sharp intake of breath from the owner, and an apology from me. It was at this point that I felt a bead of sweat begin running down my back.

Emerging into the traffic, the 190D’s 0-62mph time of 29 seconds requires you to be patient and ignore the exasperated looks from behind. But soon we were moving again with the reassuring note of the clattering diesel rising

and falling with each gear change. Eventually, we arrived back at the owner’s house, my time behind the wheel of the Ponton all too brief. With another 20 minutes I’d have mastered those shifts into first gear, which left me yearning for just one more go – a desire to conquer the foibles of a Mercedes- Benz that demands you get to know it and learn how to coax the best from it, rather than simply get behind the wheel, flick a switch and arrive at your destination without the slightest recollection of the drive.

Yes, the 190D may be slow. Yes, it may be technologically dated. And yes, it can be unforgiving. But despite all of that, it is addictive – seriously addictive.

I quickly went for first gear, but a hurried change before the clutch pedal was fully to the floor brought forth an almighty objection from the gearbox.

For all its modern features, a Ponton presents its driver with a steep earning curve.

Modest 13-inch wheels on this saloon.

Maxiumum speeds in each gear are in red.

Room for three upfront in the old Ponton.

The 190D W121 delivers little in the way of thrills but is a frugal saloon and is smoother than the 180D it replaced.

Figures for car as pictured, fuel consumption determined at % of top speed (not more than 100km/h. 68mph) plus 10 per cent.