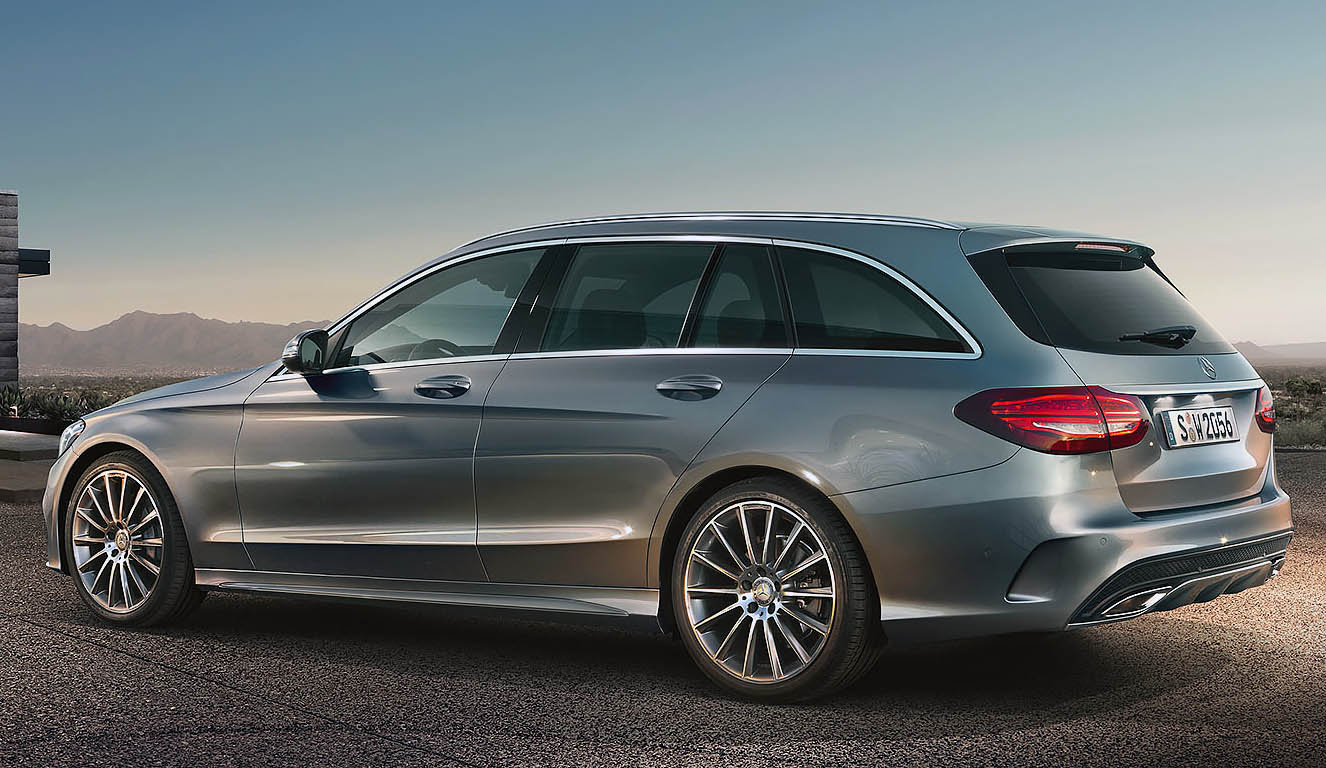 A poke around the new C-Class wagon confirms Mercedes is at the top of its game. Luggage at the ready – the new C-Class estate is coming! We attended the global launch and came away very impressed indeed. Estate cars used to be utility vehicles with an outward appearance that was subservient to their primary function as load carriers. That all changed with the rise of the lifestyle era in the 1990s, and today’s estate car buyers value aesthetics as much as practical strengths. The new, S205 C-Class estate – arriving in the UK this September – scores very well in both respects, with improved practicality within a sleek body that achieves a best-in-class drag coefficient figure of just 0.27Cd.

As is the case with the W205 C-Class saloon, dimensions of the estate have increased over the previous model. The wheelbase is 80mm longer at 2,840mm, while overall length is up 96mm at 4,702mm. The car is also 40mm wider at 1,810mm. And as with the saloon, this has boosted shoulder, elbow and headroom in the cabin. W ithin the confines of the redesigned rear compartment, load space has increased by 10 litres to a maximum of 1,510 litres with all the seats folded, and the boot space behind the seats by five litres to 490 litres.

The extra size belies the weight saving from the hybrid structure of high strength steel and aluminium. Apart from being 65kg lighter than its predecessor, the new C-Class estate also has a body shell some 20 per cent stiffer than before, which makes for a better platform for the suspension. Airmatic air suspension is optional, but rear self levelling is standard, which not only underpins the load carrying function of this car, but also its credentials as a compact luxury model.

The engineers who design the interiors of Mercedes-Benz estate cars are an inventive bunch, analysing how customers use their cars, then coming up with ways to make their lives easier. Some of the solutions to problems or inconveniences estate car owners have lived with for decades are so simple, you really have to ask why no one thought of them before. Or if they did, why such solutions were not implemented until now.

For instance, the old 60/40 per cent split rear bench backrest has given way to a more versatile 40/20/40 split, making the car a two, three, four or five seater. The S212 E-Class wagon was the first Mercedes estate to feature releases for the rear seat backrests, operated by handles just inside the open tailgate. Now the new C-Class estate goes one better by using electrically operated releases just inside the tailgate, as well as between the rear seat backrests and the doors, to unlock and fold the seat backrests. An Easy Pack powered tailgate is an option, along with the Hands-Free Access system that opens the tailgate when you swing your foot under the rear bumper area when the car senses that the key fob is on your person.

CLOCKWISE FROM RIGHT Maximum boot space has grown 10 litres to 1.510 litres; a button below the D-pillars folds down the rear seats; the rear bench now splits 40/20/40; flat-packed crate under the boot floor; clever new luggage net.

If you need to use the net to offer security against high loads sliding forwards, you can attach the cartridge to the folded rear seats that are now in the forward part of the load area. Then you extend the net upwards, engaging the ends of its metal support bar in the appropriate receptacles in the roof lining. The one feature that is exclusive to the S205 for now is the debut of the ‘Mercedes connect me’ telematics services suite that will find its way into other models in the Mercedes range shortly.

The front end of the C-Class estate is identical to the saloon’s, and that extends to the 113bhp to 201 bhp diesel engines, and 154bhp to 328bhp petrol motors. The hybrid range will comprise two four-cylinders, the C300 Bluetec Hybrid (201bhp plus 27bhp from the electric motor) and the C350 Hybrid with plug-in technology (205bhp plus 66bhp).

The new, 205-series C-Class estate sets the bar very high, with an abundance of clever features, unimpeachable build quality and a class leading perceived air of luxury. These are the star qualities that give it a head start against key rivals, both on the showroom floor and on the road. We can’t wait to drive it.