The BMW E36 is an interesting car; when it was launched it failed to impress, following as it did on the heels of the universally-adored E30. Evidence of BMW’s cost-cutting was rife and the company’s assumption that customers would just blindly buy the new model and be happy with it because of brand loyalty fell flat on its face. Build quality improved midway through the E36’s existence but it still has a reputation for not being BMW’s greatest-ever moment. It is, however, starting to be appreciated by BMW enthusiasts and while it was once one of the cheapest ways into BMW ownership it has now handed that crown over to the E46; that means that values are on the up and the best examples and most desirable models are only going to become even more sought-after. It’s a good sign and indicates that the car is approaching the most coveted period in its life cycle and now owners are more likely to treasure and truly care for their E36s. With that comes a definite move towards the right sort of mods – a while back, when the E36 was in a bit of a void between the retro charm of the E30 and the more modern appeal of the E46, there were plenty of mods that we’d all rather forget about, but these days a properly-sorted E36 has a lot going for it, like Norbert Toth’s E36 Cab. 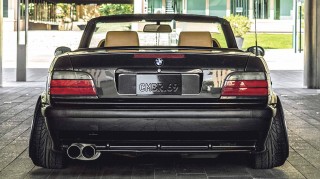 The E36 lends itself very well to a retro-styled build and that’s exactly what Norbert has gone for with his 328i, opting for some seriously cool period styling and must-have classic mods, and he’s built himself a very fine machine in the process. Even more impressive than the rather slick end result is the fact that this was not just Norbert’s first-ever BMW, it was also his first-ever car so hats off to him for putting together such an awesome build but, then again, BMW is in his blood. Norbert grew up in a BMW family and his dad was obsessed with the brand; his first BMW experience was at the age of five when he decided to drive his dad’s E30, which was parked in the front yard. This resulted in a wrecked car and a demolished fence, but sowed the seeds for what also became his obsession and he currently has three BMS in his collection, so he’s clearly his father’s son. “I bought it as a daily, did some basic mods on it and when I got another daily I started to build it to this level,” he explains as we chat about the E36. “It was one of my all-time favourite cars I could actually afford to buy; I started to do light mods on it but wanted it to look like it looks now from the very beginning. I did all the mods on my own; they did not require special skills and I enjoyed doing it,” he grins and that adds an extra level of satisfaction to the whole build for sure. 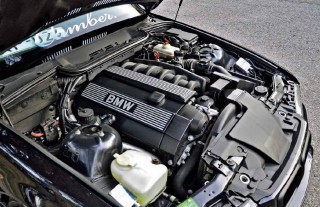 What we love about Norbert’s E36 is the fact that, air-ride aside, it could have driven straight out of the ’90s thanks to his choice of styling and, for us at least, there’s nothing better than enhancing an older car with period-correct, retro styling additions because they always look so right. Norbert’s E36 is a Sport, which gave him a great starting point as it’s a handsome looking car and he’s opted for a selection of AC Schnitzer styling additions. There’s the ACS lip, which drops the car’s front end that little bit lower to the ground as well as giving it a more aggressive look, and it is joined by the fantastically-retro ACS stripes along the car’s flanks. Even around the time when the E36 was current, stripes weren’t universally-loved but here, as a throwback mod and especially finished in gold to match the wheels and tone of the interior, we think they look fantastic and add an extra element to the visuals. Norbert has also added custom Bosch xenon headlights, a wind deflector and that ultra-rare hardtop, which turns this E36 Cab from summer soft-top cruiser to year-round semi-coupé.

Of course, you can’t possibly talk about styling without discussing the wheels because they are absolutely spot-on and there’s a good reason for that; “The wheels are custom-made to max out the stance-hella-flush look and I am very happy with them, I would not replace them,” grins Norbert and we’re not surprised. He’s running three-piece ACS Type 1 Racing 17s, already a rare treat before we get onto the whole custom-built aspect of this set, and they measure 9.5” up front with an offset of ET13 and 10.5” at the rear with an ET-2 offset for an ultra-aggressive fitment. The combination of width, low offset and hefty stretch from the 225/35 rear rubber means that at the back his arches will happily rest on his wheels when Norbert airs out and the result is nothing short of spectacular. The Schnitzers themselves look awesome, with those polished lips and the gold centres tying-in perfectly with the gold striping and the similarly-coloured interior, delivering a killer colour combo.

For the air-ride, Norbert went for a custom two-way setup and is running a Viair 480c compressor with a single tank and analogue pressure gauge mounted in the boot along with Hafner 5/3 valves. It’s all controlled via two analogue switches which, along with a pressure gauge, are custom-mounted neatly beneath the centre armrest. Norbert has also added custom adjustable control arms, which allow him to dial-in more camber to achieve the perfect stance and he’s currently running -4° up front and -8° at the rear. Elsewhere you’ll find M3 strut bearings, E46 M3 brakes and an AC Schnitzer strut tower brace mounted above the M52B28 straight-six that lives under the bonnet. The engine is largely stock and there’s certainly nothing up top that you’d notice but, down below, Norbert has fitted an Eisenmann six-into-one exhaust manifold along with an Eisenmann exhaust system. This combo frees up a few additional ponies but, more importantly, delivers a seriously meaty straight-six soundtrack the likes of which an E36 with this much road presence is truly deserving of. 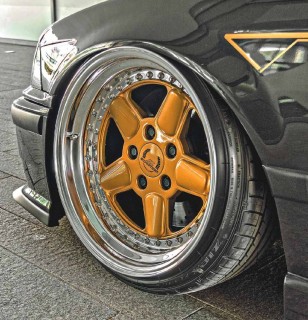 Last but most definitely not least we come to the interior and Norbert has put a lot of work in here and as a result it looks really fantastic. First up you’ve got those Vader seats, arguably BMW’s most iconic seat design to date and the go-to choice for anyone looking to spice up their E36 interior with something more exciting than the stock Sport seats. They alone are enough to make a big impact but here, as you might have noticed, the entire interior has been treated to a retrim and the colour chosen by Norbert is Modena yellow. It’s certainly not a shy shade and it makes a big impact and looks fantastic against the black bodywork, which was his plan all along. Everywhere you look you’ll find matching Modena yellow highlights, like the stitching on the steering wheel, gear lever, handbrake and centre armrest and there’s an awful lot of attention to detail in here, which includes mods like the M3 gauges and M3 sill plates.

This E36 has taken Norbert three years to build and he’s got to be seriously proud of the end result as it’s super-clean and looks really fantastic, a proper slice of retro motoring goodness. We love the fact that he’s kept so many mods period-correct and has also taken the OEM+ path for a lot of the other mods and it all works so well together. The custom wheels, he says, are his favourite mod on the whole car and we’re not surprised because while there’s a lot to love here, a set of custom three-piece Schnitzers is hard to beat. “I was considering cleaning up the engine bay and installing a roll cage but dropped the idea since I wanted to keep the car in a reversible form in case I decide to sell it,” Norbert explains and that means that this car is finished, and that’s not something we get to say very often. We’re not surprised, though, because this is a fantastic-looking E36 with plenty of presence and some really nice mods on board and to start pushing things further would have over-egged the pudding and thrown things out of balance. It’s easy for us to take a build like this for granted but Norbert lives in Hungary which has laws that make modding a challenge and that makes a car like this completely unique on the Hungarian scene and all the more impressive. With its period-correct retro-style combined with modern elements and OEM+ touches, this E36 Cab really hits the spot wherever in the world you might be and that’s no mean feat.

“There’s the ACS lip, which drops the car’s front end that little bit lower to the ground as well as giving it a more aggressive look, and it is joined by the fantastically-retro ACS stripes along the car’s flanks”

Adjustable control arms have been used to add -8° of camber at the rear.