Porsche is the car many Volkswagen owners aspire to,” reasons Matt Roberts, owner of Dubunit, the VW and Audi maintenance and tuning specialist based in Tamworth. “I grew up modifying Mk1 Golf GTis. I spent years experimenting with various engine swaps and forced induction in the search for big bhp, but after witnessing a pair of ridiculously loud 993s strut their stuff at Castle Combe many years ago, I knew my name had to appear on the logbook of a 911!” he grins, pleased that his dream came true, albeit at the expense of the house he was planning to buy with his girlfriend. 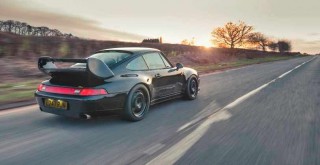 “We’d saved a decent deposit, but our plans took an unexpected change of direction after I visited Japan and raced a highly modified 964 in the 2015 Idlers 12 Hour Enduro,” he says. The opportunity to compete came about as a consequence of one of Matt’s friends paying an unplanned visit to the workshop of Akira Nakai, the man behind Rauh- WELT Begriff (RWB), the controversial tuning firm we showcased in last month’s edition of Ultimate Porsche (order a back issue copy of the magazine at bit.ly/landsharkup).

“My mate, Alex, is a test driver for Honda,” continues Matt. “He called me during time working overseas in Japan. During our conversation, he let slip he was working in Chiba, a town forty kilometres southeast of Toyko. I recognised Chiba as being where RWB is based. Knowing Akira has a reputation for being approachable, I urged Alex to visit the RWB workshop during his stay,” he adds.

A few hours later, the 36-year-old was gobsmacked to receive a smartphone photo message from Alex, who was pictured standing next to Akira in the RWB workshop. “He’d spent most of the day helping out at RWB. Akira had even taken him out for ramen as way of thanks! I don’t know what I was prouder of, the fact my mate was hanging out with one of my heroes, or that he was doing so while wearing a Dubunit t-shirt!”

If having his company logo featured in photos with Akira was enough to generate excitement in the Roberts household, the next unexpected turn of events was nothing short of mind blowing. “In 2015, Alex announced his stag do as being a trip out to Japan. He’d told Akira of his intention. Impressed by the fact Alex is a professional test driver, Akira invited the small group of us attending to drive his Natty Dread Jr 964 creation in the Idlers contest. He asked us to partner with representatives from RWB’s Los Angeles outpost. I was astounded!” he gasps.

A high number of RWB machines were entered into the competition, but the bright white, longtailed 964 Matt drove was the most eye-catching of all those campaigned on the day. As part of a team of eight drivers, including RWB Los Angeles boss, Joey Chang (read all about his wide-arched 993 by ordering a copy of our March issue at bit.ly/issuesup), our man from the Midlands completed three stints behind the wheel, with Akira congratulating him on a job well done. “I was exhausted, but driving the car back to Chiba alongside twelve other wild RWB-kitted 911s was an experience I’ll never forget, and one which was just as enjoyable as competing on the track,” he muses.

You can live in a car, but you can’t race a house, which is one way of justifying what happened next. “I told my girlfriend I had to buy a 911. I’d expected the 964 to behave like the rear-wheel drive VWs and Audis I’d driven previously, but I was wrong. It was a totally immersive experience. I knew we were saving up for a house, but there was no way I was going to be able to ignore my yearning for an air-cooled Porsche. After a fair amount of soul searching, we came to an agreement: I could have a 911 with the condition my girlfriend could buy a horse.” Needless to say, saved funds were depleted quick sharp!

The 911 Matt bought wasn’t a 964, but a 993 Carrera 2 configured for circuit life. Despite a significant amount of time and money invested in preparing the car for the track, previous owner, Gary Duckman (a former Production Touring Car Championship victor who spent the first five years of his racing career competing in Porsches), only drove the car for a trio of races in the 2009 Porsche Club Championship. It’s worth noting, however, this low number of appearances returned impressive achievements in the form of a podium finish and a series lap record at Donington Circuit. Not a bad return for just three outings behind the wheel!

Back then, the car was blue and covered in sponsor stickers. Today, it retains its status as a track-friendly, street-legal 993, but is dressed in a stealthy getup of gloss black with colourcoded Work Meister S1 three-piece split rims (Team Dynamics Pro Race 1.3s and OZ Racing magnesium five-spokes for track action), a GT2 rear lid, all-red taillights, bonnet pins and an RS front lip. Matte black Dubunit body graphics and the branding of tyre manufacturer, Nankang, complete the look.

“I’ve raced powerful cars the whole of my adult life. Over the years, I’ve tested many different track-focused tyres, but none come close to Nankang’s AR-1 offering. I’m amazed at the levels of grip it achieves. Similarly, the company’s NS-2R street compound gives me full confidence in all weather conditions. I’ve extensively tested Nankang products at various circuits, and I’m proud to have the company’s logo on my classic Porsche,” beams Matt.

His car’s rebuilt 3.6-litre flat-six remains in a near-standard state of tune, although benefits from modified ECU software pushing power to 280bhp. As anyone who spends time at the track knows, the key to a quick circuit car is to ensure it maintains speed during cornering. To that end, Matt’s 993’s chassis has been significantly upgraded through the appointment of JRZ two-way adjustable racing dampers, Powerflex polybushes, RS-spec lower arms, matching anti-roll bars, rose-joints throughout, a plated limited-slip differential, altered transmission ratios, a CAE Ultra Shifter, a multi-point weld-in roll cage, EBC Yellowstuff brake pads, drilled and grooved discs and almost every applicable part from the Rennline product portfolio. Not that the underpinnings of the car were set up correctly when he grabbed hold of its keys for the first time…

Shocking. That’s how he describes the car’s handling characteristics when he first drove his new toy in anger. A previous owner saw fit to install 1270lb springs and employed Stevie Wonder to set alignment. At least that’s how it seemed until Matt rectified the problem by fitting springs matching RS specification. Professional geometry and corner weighting followed, resulting in a seriously sorted roadlegal track weapon that’s since been raced up the famous hill climb at Goodwood.

“My aim is to treat the car to RWB styling in the not too distant future,” he reveals. In the meantime, he’s enjoying as much seat time as he can cram in at many of the UK’s bestloved racing venues. It might be a far cry from piloting a classic Porsche at an Idlers endurance racing contest in Japan, but with one of Akira’s outrageous body kits fixed into place, there’s no doubt this black beauty will serve as a permanent reminder of its owner’s life-changing experience in the Land of the Rising Sun.

First Porsche This one!

It’s rough and ready on the track

Best thing about being the owner of a modified Porsche

The people you meet and the places you go

Above The interior of Matt’s 993 is very much a case of function over form, as you’d expect from a car prepared for a life at the racing circuit Far left CAE Ultra Shifter is a recent addition and optimised for motorsport use.