When Hans Werner Aufrecht and Erhard Melcher founded ‘Aufrecht Melcher Groftaspach Ingenieurburo, Konstmktion und Versuch zur Entwicklung von Rennmotoren’ (Aufrecht Melcher Grofiaspach engineering firm, design and testing for the development of racing engines) in 1967, one wonders if they could ever have imagined that their company name, thankfully abbreviated, would become the byword for Mercedes-Benz’s most prestigious performance models. 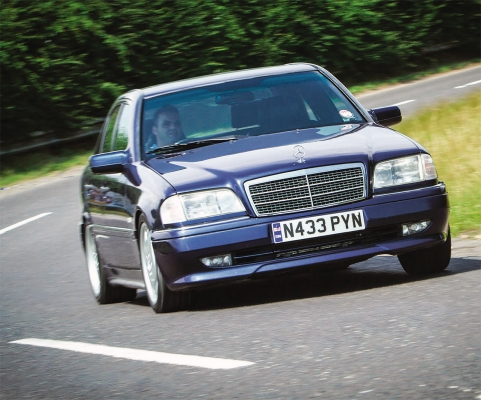 AMG, those three letters that we know so well (the first two represent the founders’ surnames, the 4G’ representing ‘Grofiaspach’, the birthplace of Aufrecht), were placed on the bootlid of a rather practical yet refined saloon in 1993, transforming it into a machine with almost mythical qualities that inspired desire, along with an addictive dose of mild fear.

In its early years, AMG breathed upon the W109 300SEL 6.3, which resulted in one of the most iconic post-war Mercedes, the aggressively styled ‘Red Sow’, and which took a class win and second overall in the 1971 Spa 24-hour race. The rest, as they say in Germany, isgeschichte.

For the young Bruno Chaves growing up in Lisbon, those three letters became an all consuming passion, as he poured over car magazines and absorbed the facts of any AMG that he saw, dreaming that one day he would become the owner of one of those legendary machines.

“What I have to explain to people,” begins Bruno when we meet near his home in Kent, “is that back in my country, Portugal, people don’t drive a lot of petrol cars. For us Portuguese, it is always diesel cars, so even just seeing an AMG is something very special.” As Bruno grew up, the world of work beckoned, which led him to his first Mercedes-Benz, a 1986 W201 190D, which he purchased in 1998. “Since then, I have had a lot of Mercedes,” he laughs. “Three W201 190s, and two, maybe three 124s.” He pauses, silently counting out on his fingers. “About eight 210-series E-Classes, a few 220 S-Classes and two C208 CLK coupes.”

Beside us stand three of Bruno’s current fleet of Mercedes, his fourth, a Vito van which he loves just as much as his cars, is at home today. So how did he come across these AMGs? “I have always wanted a C36 ever since I worked on one many years ago,” Bruno answers. “After that, it became my dream to own one, so when this car came upon eBay in August 2011, I bought it with the intention of making my mark on it. 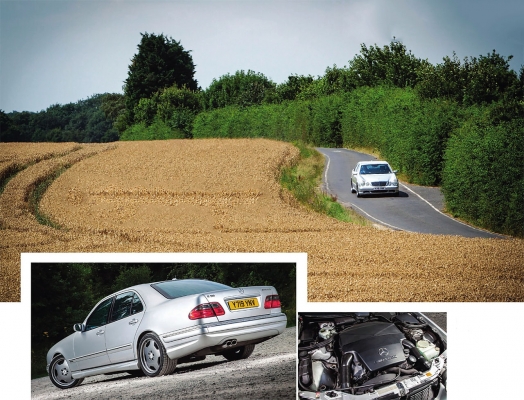 It was cheap at £1,550 ( because it was a non runner, but I knew I could bring it back to life.” Following the small undertaking of a full rebuild of the C36’s M104 24-valve engine, Bruno then turned his attention to refreshing the suspension, replacing springs, shock absorbers and bushes, to re-establish some on-road poise, before finally handing the car to a local company for a full respray to bring it back to near showroom condition.

“The work took me quite a while,” Bruno explains, “because I bought the E55 just a couple of month later in November 2011. That too was a non runner, so cost just £2,500, but as I wanted that to be my day-to-day car, it took priority. The C36 absorbed three years of my life, and now it is finished I just drive it to shows and things – she is an old girl and has had her day, so she needs a rest.”

While basking in the glory of restoring one AMG would suffice for many people, Bruno simply can’t get enough of these cars. ‘Tin also passionate about the M113 V8,” he explains, referring to the power unit that sits in his E55, and develops 349bhp at 5,500rpm, with 391 lb ft of torque at 3,000rpm. “When I bought the car,

With what seems to be a recurring theme emerging, Bruno explains that while his E55 was not exactly the best example on the planet, it would serve as an excellent base for his plan to return an E55 to near original condition. “The suspension needed new bushes throughout,” he explains. “So I decided to fit polyurethane ones, which give a slightly firmer feel, but more importantly last much longer than the rubber ones, so they should not need any attention for a good while. The arches were not so good either, but that is a general problem with the W210,” he adds. “One wheelarch was particularly corroded, so I had that cut out and new metal put in, then had it sprayed. The rest of the bodywork will be attended to in the future.”

For Bruno, the E55 AMG is still some way from the condition that he deems acceptable, and getting it there will cost between £5,000 and £7,000 according to his estimates. “Eventually, I will have the body taken back to bare metal, repaired and painted, just like I did to the C36 saloon. There’s no limit to what I’m prepared to do to this Mercedes-Benz – whatever it takes to get it back up to scratch, that’s what I’m prepared to pay.”

Granted, the E55’s bodvwork is far from perfect, but nevertheless presentable, while out on the open road the car is still capable of delivering an impressive drive. Practical and refined, the unprovoked E55 is as docile as it is latent, but unleash the animal within and a bellowing soundtrack accompanies the forceful acceleration as you are pushed back into the supportive leather seat and the hedge lined road becomes a blur.

You find yourself grinning broadly, and begin to comprehend just how addictive the E55 could become, even when allowing for the need to visit petrol stations on an almost daily basis, the official 23.3mpg combined fuel consumption taking a tumble when you press the enjoyment pedal on twisting country lanes.

“The C36 was my passion when I was a boy, and it is still a nice car to drive, but nothing beats driving the E55 saloon,” beams Bruno. “I have driven all over Europe in that car, including to the Netherlands, Belgium, France, and of course on the German autobahns,” that last word eliciting a smile.

“I had a clear road so I thought I’d see what she could do. I was sitting on the 155mph limiter for five miles, it was incredible! I was surprised at just how solid it felt, and it didn’t even seem to be working that hard, sitting at about 4,000rpm. It just felt very relaxed.” But that was always AMG’s intention, the high end company synonymous with speed and control.

THE CREAM OF THE CROP

So with two of Bruno’s Mercedes-Benz’s already carrying the AMG badge, I ask him how he came to own one of the more recent icons, the C63 AMG Estate? “It is because of the M156 engine,” he replies. “It was the first powerplant designed by AMG itself, and I don’t think we will see the likes of it again, due to stricter emission laws and so on. It’s not like the M113 engine, which was designed by Mercedes-Benz first and then reworked by Affalterbach. The M156 is more special to me, and I just needed one in my life. 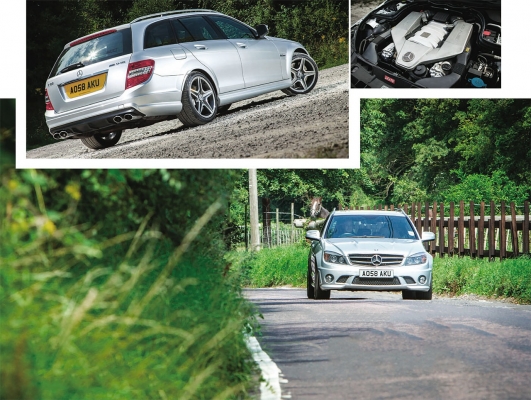 “The C63 is a driver’s car, even in estate form,” continues Bruno. “There’s nothing clever like air suspension – just you, the steering wheel and the car. I take the family down to Portugal quite a lot. Of course it is fast,” adds Bruno with a knowing smile, “but I took it to TDI Tuning in Chelmsford and had it remapped. It now has 510bhp and a derestricted top speed – I’m looking forward to finding out what it will do now!”

As our time together comes to an end, it is clear to me that Bruno has a great appreciation for AMG, and what those three letters stand for, but keen to know where his affection really lies, I throw him the million-dollar question, asking him which car he’d never part with. He begins to reply, then stops himself and rubs his hands over his face. “It would have to be the E55. When I first saw the car, I felt so sorry for it. I said, ‘Are you going to come home? I won’t let you down’, and that’s it.”

He pauses again before letting out a laugh. “It’s love, I suppose! That car stays with me until I die.”

Thanks to Chatham Ski Slope & Snowboard Centre for the location.