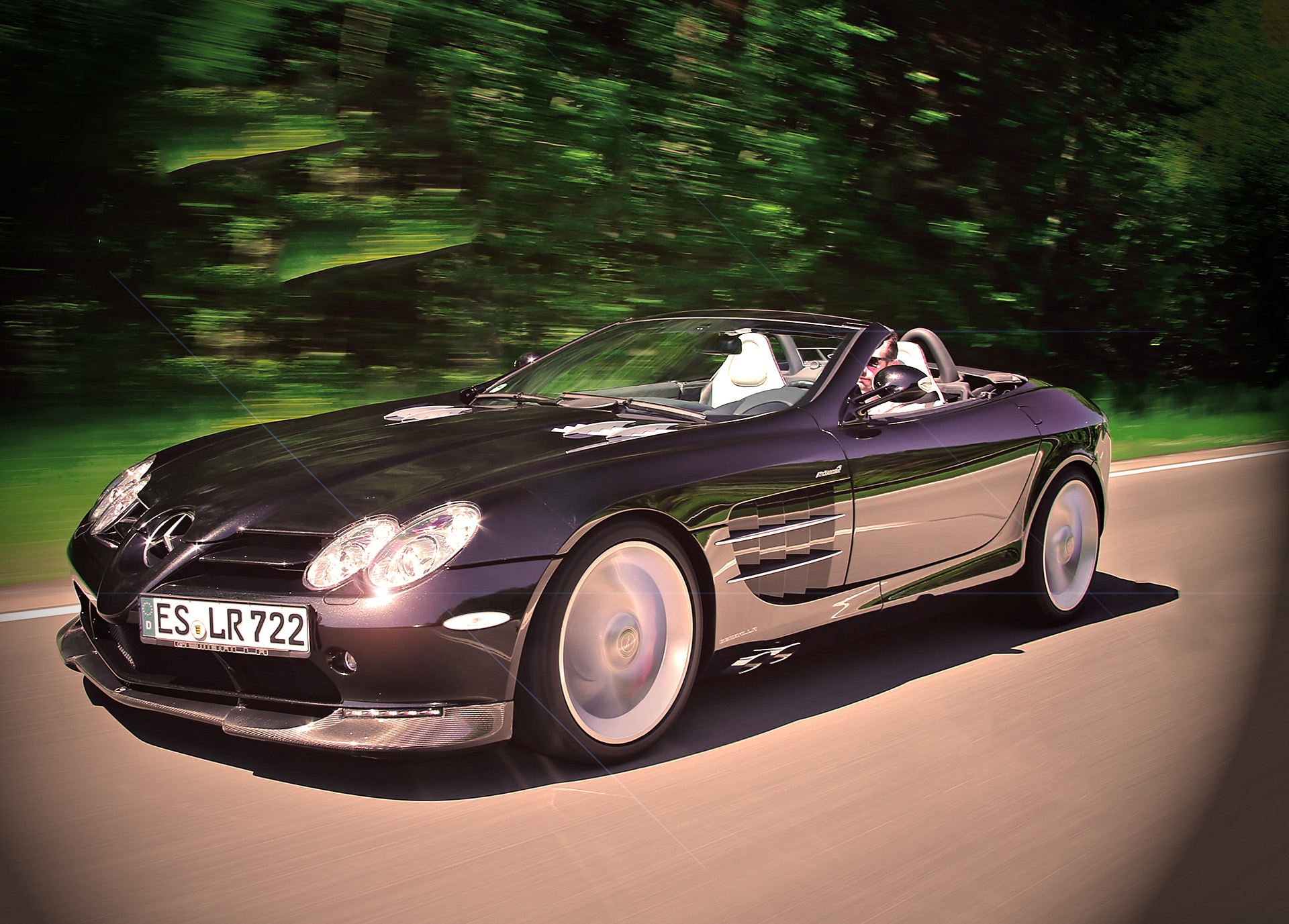 The Mercedes-Benz SLR McLaren R199 is one of the most spectacular supercars from the final years of the 20th century. Launched in early 2004, into a world where supercars still sported a manual gearbox, the SLR broke the mould by being the fastest production automatic supercar in the world.

However, despite its crowd stopping looks and the butterfly doors that always guarantee an audience, the SLR will also be remembered as a flawed gem. To the purist, it was not a McLaren and not a Mercedes, and was also compromised as a driver’s car. 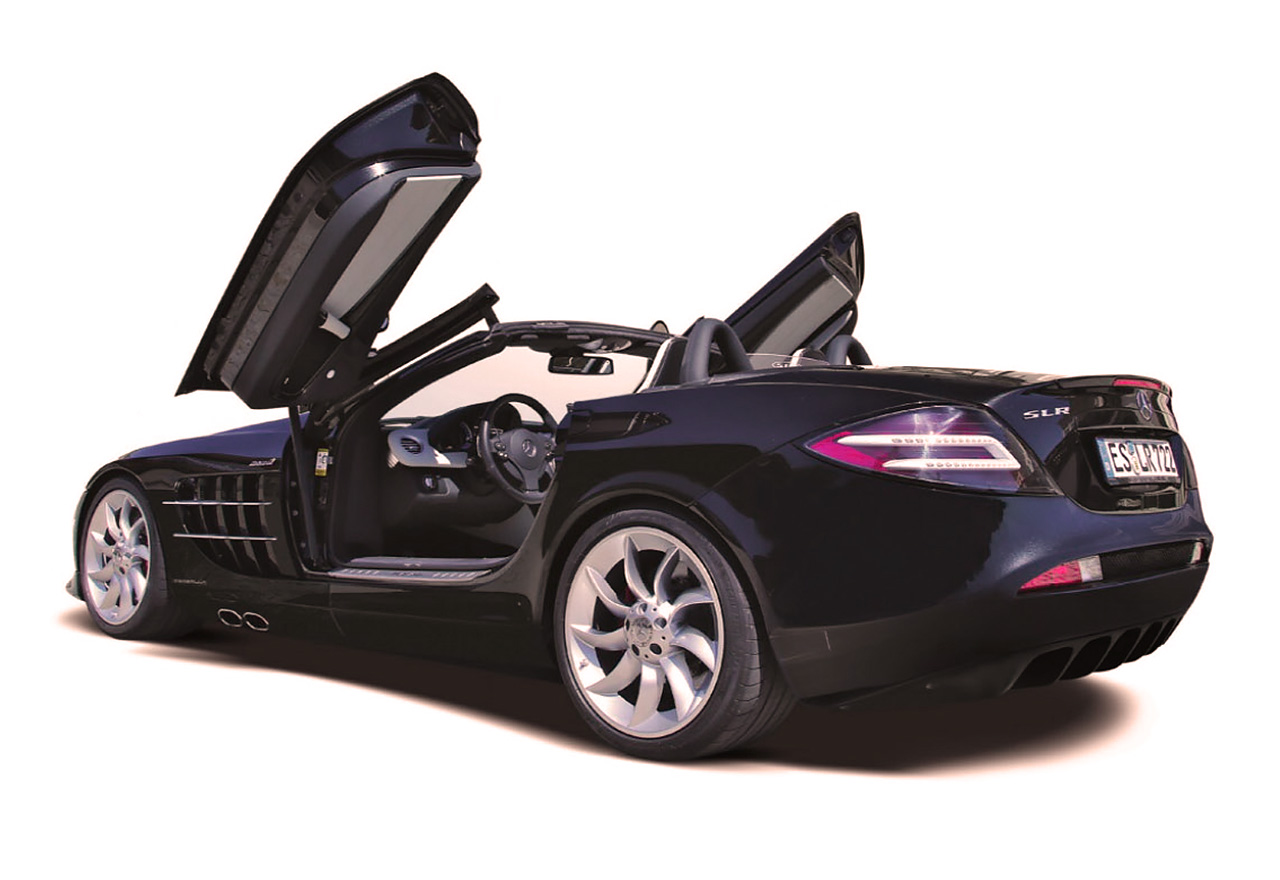 Despite a great spec on paper, with double-wishbone suspension, a carbon fibre tub and bodywork and so on, and the not inconsiderable input of accomplished race driver and McLaren development engineer, Chris Goodwin, the SLR left the starting line a work in progress, which in the end was never quite finished in terms of its dynamics.

At first contact, you will find that the power steering is heavy, yet it gives almost no feedback until you brake hard on an uneven surface, causing the wheels to tramline and the helm to wiggle in your hands. Also, the rotational pivot point of the chassis is relatively far forward, and with the seating position far back, this makes for a strange sensation going around slow, tight corners especially, when you feel like you are on the end of a see-saw.

“We asked KW to refine the suspension settings to the nth degree, and manufacture everything almost regardless of cost”

For me, these flaws are less of an issue with the SLR Roadster, which keeps the coupe’s spectacular butterfly doors. With the al fresco experience moving centre stage, the driver tends to push less hard, instead simply enjoying driving the old fashioned way. Suitably amplified around you, the SLR’s thunderous V8 soundtrack is the panacea that overshadows the car’s negative issues.

The SLR Roadster’s positive aspects and specialness captivated Andreas Schwarz, a die hard car enthusiast, engineer, and the owner of an automotive engineering company in addition to being CEO of Gemballa GmbH. “I love the look of the SLR, and of course its soundtrack,” he said. “SLR Roadster deliveries began in 2007, and my car was built in 2009, the year production ceased.” However, as a keen driver, Andreas was also well aware of the car’s dynamic limitations. With his experienced team of in house engineers, as well as specialist industry partners, he was fortunate to be in a position to address and correct them.

Being in the supercar tuning business, Andreas wanted to bring his SLR up to date, and one of the aspects missing from a car designed and built in 2006 was daytime running lights. “There is no place on the front of the car for these, but I realised that if I fitted a larger front spoiler, which the car needs for high speed stability anyway, I could incorporate the DRLs into the area where the new spoiler joins the lower front bumper, and kill two birds with one stone,” he explained.

The original SLR has a reputation for noticeable instability at very high speeds, which was overcome on the SLR 722 Edition by using a larger front spoiler lip to enhance down force, and increasing the angle of attack of the computer controlled rear wing to rebalance the aerodynamics. The 722 Edition’s carbon fibre front spoiler lip adds up to 128 per cent more downforce over the front axle, while at the rear, the computer controlled spoiler that tilts to a maximum of 30 degrees in the SLR, travels an extra five degrees on the 722. This is enough to add 13 per cent more downforce at the rear to rebalance things. 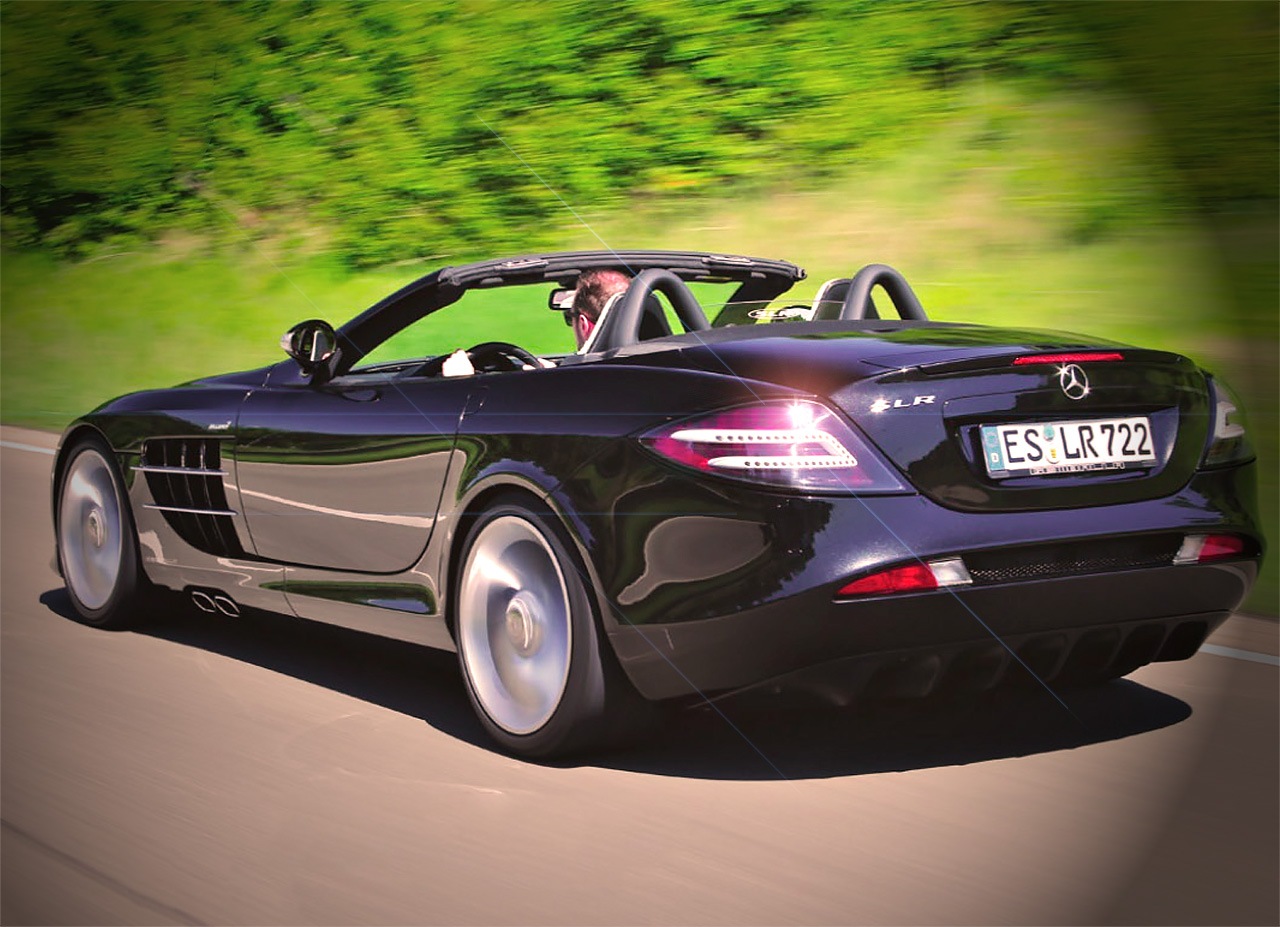 As before, when you brake hard at over 75mph, the rear spoiler rises near instantly to a 63-degree angle, acting as an airbrake to help retardation and create downforce to mitigate the destabilising forward weight transfer. The black plastic mouldings fixed to the rear of the front spoiler, and at the rear of the side skirts in front of the wheels, reduce the drag created by the rotation of the tyres and also help to clean the air flow along the car’s flanks. Despite an aggregate increase in downforce from 78kg to 122kg, the combination of these elements sees an improvement in the drag coefficient of the SLR coupe from 0.374 to 0.366Cd. A limited number of open versions, known as the Roadster 722 S, were also built.

It comes as no surprise that the Gemballa car resembles one of these at first glance, as its deeper front spoiler takes styling cues from the 722 design. However, if you saw them side by side, the differences become clear. The profile of the Gemballa spoiler is far more accentuated, especially when seen from the side, and of course when the motor is running the DRLs stand out.

“Fitting the new front spoiler is not as straightforward as it might seem,” Andreas explained. “The small, standard SLR spoiler and the larger 722 Edition one use different front undertray designs, so we came up with our own undertray that fits both versions.” That said, it was critical to Andreas that the Gemballa parts use all the original fitting points for ease of installation. Of course, this also means that the car can be returned to standard with no signs that anything was ever changed.

The next part of the car to sort was the chassis. Andreas approached Gemballa’s suspension partner, KW which coincidentally made the springs and dampers for the SLR Stirling Moss of 2009, as well as the suspension upgrade kit for McLaren Special Operations (MSO).

“As Gemballa has a fairly small customer base for such items compared to McLaren, we could afford to go the whole hog,” Andreas explained. MSo we asked KW to push the boat out, refine the settings to the nth degree, and manufacture everything almost regardless of cost,” he said. “We have thus ended up with an almost no compromise adjustable suspension kit that is unique to us, and which we are really proud of.” As set up on Andreas’ car, this

fully adjustable suspension kit drops the ride height by 20mm and improves the ride and handling. “I chose to lower the car slightly mainly for visual reasons, but you can retain the standard ride height as well if you live in an area with speed bumps, or if you have a garage ramp,” Andreas explained. “Adjustable suspension is one thing, but ease of adjustability is quite another,” he continued. “You normally have to put the car on a lift to adjust the settings, and with the flat bottom panels it is not easy. So what we have done is made small holes in the panels to allow access with a special tool. This allows you to move from street to track settings and back fairly easily.

As the coupe and roadster have different suspension settings from the factory, so do their Gemballa modified equivalents. The hardware is identical, but the set up is tailored accordingly. “It cost us a lot of money to do it this way, but I am only interested in getting it right,” said Andreas.

Gemballa now has a bespoke, five-spoke 20-inch wheel design for the SLR, which was in final prototype form when I drove this car. Using Gemballa’s bespoke spacers and commensurately longer bolts, the factory wheels are pushed out by 7mm at the front and 12mm at the rear, filling the arches and giving the car a lower, wider and more purposeful air.

The SLR sits in the 200mph Club by a good margin, and I clocked 208mph in one of the 722 Edition press cars on the launch event with a member of the Mercedes staff reading the speedo. Where the standard issue SLR Roadster has 617bhp at 6,500rpm and 575lb ft of torque from 3,250rpm to 5,000rpm, 50 per cent better intercooling and individual ignition packs for the hand built, 5,439cc supercharged V8 make a significant difference to the 722 Edition motor, which is rated at 641bhp at 6,500rpm with 6051b ft of torque at 4,000rpm. 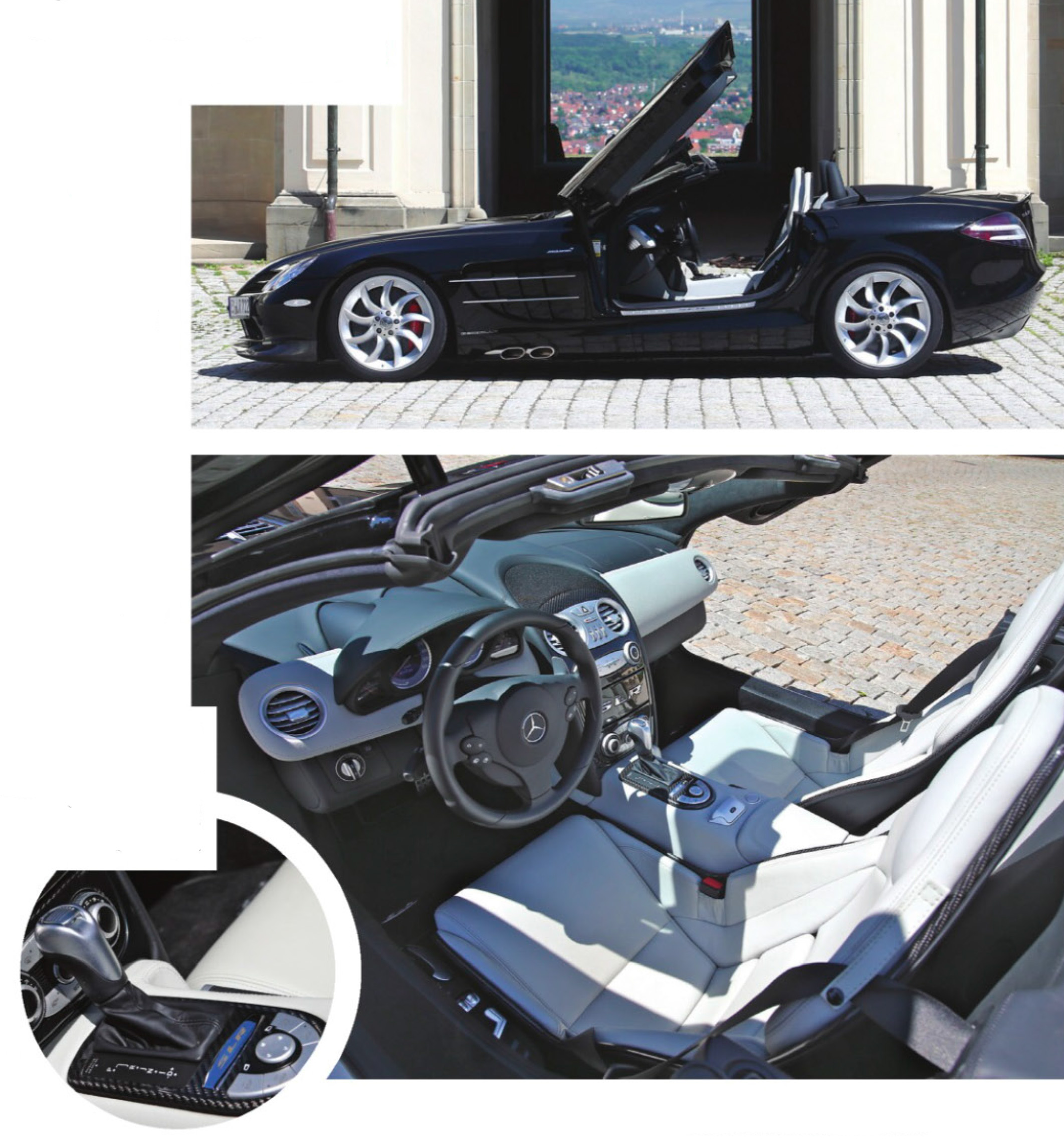 “Our upgrade increases the output of both the stock SLR and 722 Edition motor to 661hp (652bhp),” said Andreas. “But you should know that production tolerances still exist even with these hand built AMG engines. The best we have seen is 661 hp, with the worst case showing 652hp (643bhp),” he said.

With all these changes in place, Andreas’ SLR feels like a different car. If you know the standard SLR, it is obvious that the secondary ride is now more comfortable, with the edge taken off short, sharp bumps at town speeds, and the tugging at the helm when braking on a bumpy surface is now almost non existent.

Body control was never an issue with the standard car, but the tendency for its spring and damper rate pairing to throw the car over some combinations of bumps can be disconcerting. That behaviour is now gone, and the car feels settled, stable and more comfortable at all speeds. The improved composure helps the steering, which feels less ‘sticky’ and more consistent thanks to revised geometry. There is a light-hearted saying in the automotive business that if the engineers had their way, a car would never be launched because they would simply continue to work on it ad infinitum. It is clear that time and cost issues forced the SLR into production with some aspects of the car still a work in progress. For the large pan, the Gemballa upgrades have brought the car most of the way towards being a finished symphony. It is still not quite perfect, but if it were, the engineers would have nothing more to do!

Side exiting exhausts are another nod to Mercedes’ 1950s racing car.

The breathed on M155 V8 snorts with even greater gusto.

This door design was shared with the SLR Silver Arrow.

A combination of sports car and GT themes in the cabin.

At the time, only a five-speed auto could handle the torque.

Stunningly fast when new, there is still an air of mystique surrounding the SLR. Gemballa’s work bringing new focus and refinement to the package.

Figures supplied by Gemballa. except weight which is for a standard SLR McLaren Roadster. fuel consumption according to NEDC combined.