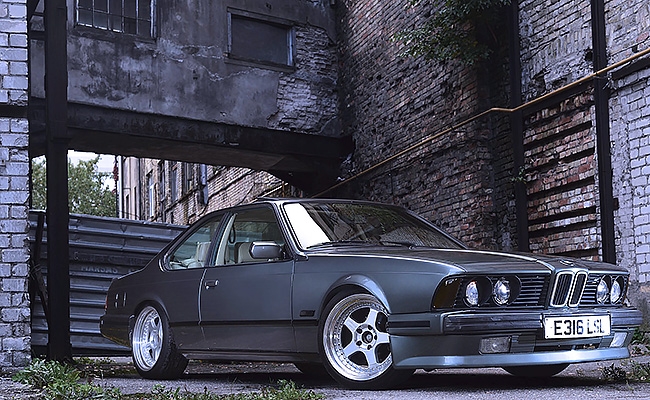 The origin of species. Words: Daniel Bevis. Photos: Deniss Podnebess. The new wave BMW 6 Series E63 and F13 can be ordered with a big size V8, so it’s a natural evolution for the old-school BMW E24 to put a very big V8 engine in one of them too, right?

Evolution. It’s a word that comes up time and time again in the car modifying world, and not just in relation to tech-fest Japanese rally nutters. Any project you can name passes through stages of evolution, from the ‘I’ve just bought it and I’m excited about the possibilities’ phase, through the ‘now it’s up on the ramp I can see just how rusty it is’ era, and onward into the ‘damn it, the engine’s screwed, I’m just going to throw a V8 in there’ adventure. Or whatever. It’s rare to find an owner who’s started off with a precise plan of action for a project and then rigidly stuck to it. 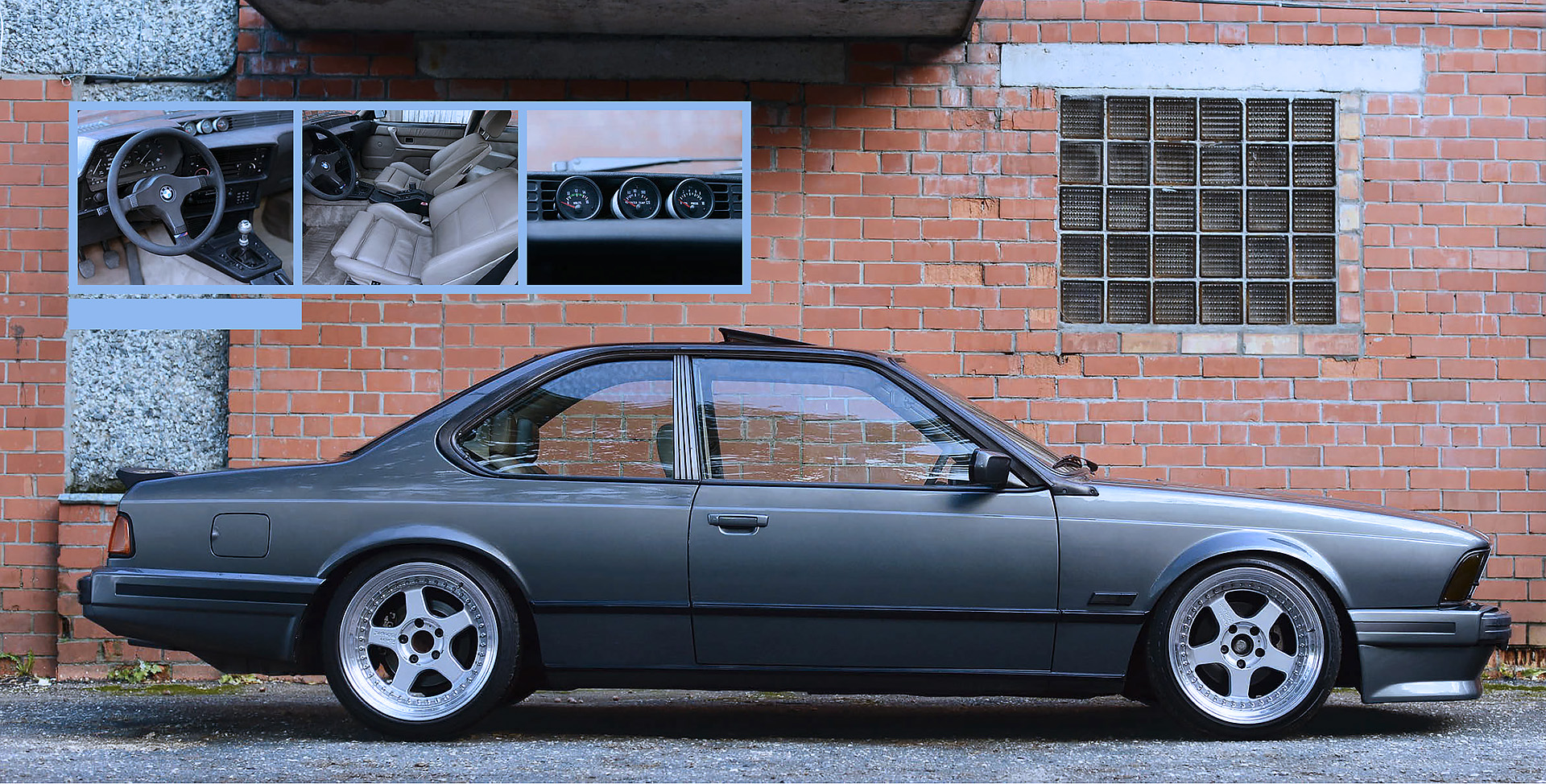 Of course, evolution can manifest itself in other areas too. Looking at the modification of BMWs that sit more happily in the ‘classic’ or ‘retro’ sphere, you can take a more Darwinistic slant on the process, honing and refining to contemporise the model – it’s a popular move to retain the old school looks while stuffing the thing to the gills with new wave horsepower. An old car with a newer engine can be seen as a natural phase of evolution, retaining its classic style while deploying enough grunt to keep up with the modern traffic.

And seldom are those gills more shapely and alluring than in the case of the old shark-nose E24. This is a timeless piece of design. Devastatingly pretty yet somehow aggressive, it’s like an BMW M5 femme fatale in a well-cut suit, at once subtle and refined, and ready to seriously rough you up. But time erodes comparative perceptions of performance, and the old 6 Series notion of speed, while impressive at the time, doesn’t arch the eyebrow today. This is neatly summed up by Maxim Rakut, the chap who expertly nailed this E24 together: “The original engine wasn’t powerful enough for me, so it all centred around the engine swap,” he says.

And whereas the mighty Great White made the evolutionary journey from singlecelled protozoa, through the fledgling stages of multi-cellular life, into blobby fish-like experiments and, ultimately, into a honed, pointy-nosed devastation engine intent on chewing the crap out of everything in the briny deep, so this shark-nosed retro Beemer has evolved into a modern marvel.

This is no archaic plankton-chomping Interior has been kept virtually standard, with just an M Tech 1 wheel, some gauges and gear knob added minnow, but a thoroughly brutal, er, fish.

Now, spurious aquatic references aside, you’ve probably noticed that this car is on UK plates. But looks are often deceiving, as this project proves by calling the Latvian city of Riga its home. Just how on Earth did that come about, then? “I wanted to build an E24, so it was just a case of finding the right one. And when the right one came along, it was in the UK,” Maxim shrugs. “So I booked a trailer, brought it back to Latvia, and started work on it straight away.”

Admirable stuff, and no surprise when you learn that the story of his past is stuffed to bursting with modified BMWs, each chapter revealing a fresh new surprise. His first car was an E30 323i – “why did I choose that? Because E30…” he grins – and the ensuing years up until this point in the 27-year-old’s life have featured such treats as an E30 325iX turbo, an E28 M535i, an E30 325i M50 turbo, various other E30s with M60 and M62 V8s… “I’ve been quite busy during the last few years,” he modestly admits.

This isn’t all just frivolous tinkering of course, Maxim runs his own car repair business, which allows him the freedom to play in his idle moments with the help of a shop full of tools. “I’ve been into cars since I was at school, and as soon as I left I opened up my own garage,” he says. “And BMWs are everything I expect of a car – fast, reliable and beautiful.” It’s safe to say that he’s fervently pursued his passion ever since.

This supposedly underpowered 6 Series that he found himself with, then – with a long and varied history of engine swaps, what would fit the bill for this project? “I knew straight off that I wanted to fit an M62B44 4.4-litre V8 in there,” he says matter-of-factly. “It’s a great engine, and I knew I wouldn’t have to do a lot to it as it makes great power as standard – enough for this E24, anyway! So the engine is still stock, it’s only the ECU and exhaust that have been modified.” This makes a lot of sense, given his keenness for reliability. And the M62 engine selected for this project, taken from an E38 740i, is good for 286hp in stock form (and a little more now, thanks to Maxim’s fettling) – the basic 628CSi offered 184hp when new, and even in full-fat 635CSi form you’d be looking at 218hp from the M30 big six engine, so the gains from the more advanced V8 are obvious. Oh, and the very fact of being a V8 means that it rumbles like nearby jungle drums and rocks the car from side to side when you blip the throttle, which naturally imbues the build with a few extra gold stars!

“The car wasn’t in great condition when I bought it,” Maxim remembers, “but that was okay as I knew I wanted to change and refresh a lot of things. And it only cost £900 to buy! Although the repairs and mods have cost more like £10,000 and that’s just in parts and materials, I’m not including my labour in that… But all the work was in my head and hands, and although we had various other projects and engine swaps happening in the workshop, I was pretty single-minded on getting the V8 in.”

It’s a lot of engine to stuff into a comparatively diminutive car though, isn’t it? Surely that presented a bit of headscratching and heartache? “Well, no, not really,” says Maxim. “It was a pretty involved and complex task, but it didn’t really present any huge problems, aside from there being nowhere to refit all of the parts for the braking system once the engine was in – I had to find a place for some tanks under the front bumper! But the only real problem that the engine swap presented was that it highlighted how poor the handling and braking was.”

I built the car to be driven, it’s not a trophy queen built to win awards

With this in mind, he set about modifying a set of Raceland coilovers to fit, allowing enough adjustability to hone and tweak the ride to his own preferences. After much thought about brake options and upgrades, he reasoned that the stock setup was actually well up to the task of coping with the extra power, but did require a total overhaul, so the entire braking system has been replaced with brand-new OE bits.

A key feature of this evolutionary build, and one that Maxim was very keen to observe and maintain, is the element of stealth. You’ll notice that the body of the car is pretty much as BMW intended, and that’s no bad thing – the E24 is one of the most beautiful designs ever to roll balletically and majestically from a BMW forecourt; everything from the jutting shark-nose to the swooping curve of the roof, the arch flares to the gentle rounding of the bootlid beneath that retro rubber spoiler, all coalesces into one glorious whole. And if it ain’t broke, don’t fix it.

Maxim’s strategy, then, was to refresh and enhance rather than transmogrify. The tatty bodywork was repaired, with OE replacements where anything was beyond salvation, and the whole thing was shot in its original shade of paint. “It’s Dolphin metallic,” he confirms. “I believe older BMWs should stay in their factory colours.”

One obvious deviation from the stock-as a-rock silhouette resides beneath those newly-solidified arches, in the form of a set of Hamann Motorsport five-spokes. “These are exactly what I had in mind for the project, there was never a question of using any other wheel design – and they look perfect on the car, I’m really pleased with them,” says Maxim with well-deserved pride.

With so much attention paid to preserving the factory aesthetic and getting everything just-so, it’s interesting to note the man’s attitude to go versus show: “I built the car to be driven,” he explains, “it’s not a trophy queen built to win awards.” And after two years of graft to get it where it is today, he’s certainly earned the right to make that call.

“I’ve done everything myself on that car, aside from the paint which was done by a local paintshop – I bought the parts on eBay to keep costs down as much as possible, the interior has remained largely stock aside from the extra gauges, and it’s just been made to drive.”

This fits in perfectly with the concept of evolution. BMW’s whole ultimate driving machine shtick makes sense within each chapter of the marque’s history, fitting into Maxim’s rosy notion of “fast, reliable, beautiful” but again, time alters perceptions.

Performance parameters get reframed. So what this build showcases is the principle of adjusting and reworking an older car to make it relevant in a modern context: here we see the classic lines in the era appropriate paint, period-correct aftermarket wheels, an interior that oozes as much effortless chic as it did decades ago… and yet there’s something more tractable, more energetic under the bonnet. This isn’t a bonkers, big-power, ballistic build intended to tear up dragstrips and set a new 6 Series horsepower benchmark – it’s about creating an E24 that makes sense as a luxury sports coupé in 2014. Its kindred spirits can be found languishing on sundrenched rocks on the Galapagos Islands, gradually adapting to their surroundings and making themselves the best they can be; Darwinism in action, from a petrol-soaked corner of the Latvian gulf .